In Bavaria, the start of May is becoming increasingly uncomfortable: on Wednesday, squalls and strong thunderstorms threaten. Then the weather changes on Mother's Day. All news in the ticker.

In Bavaria, the start of May is becoming increasingly uncomfortable: on Wednesday, squalls and strong thunderstorms threaten.

Then the weather changes on Mother's Day.

The German Weather Service has issued warnings for all of Bavaria.

In Munich there is a risk of gusts of wind at 60 kilometers per hour (valid until 7 p.m.).

It is also uncomfortable in the surrounding area.

For the south of Bavaria there is even a warning of gusts of wind at 80 kilometers per hour (valid until 10 p.m.).

In some parts of Bavaria (including Ansbach, Eichstätt and Regenburg), according to the DWD, there is a risk of strong thunderstorms, and hail is also possible (valid until 8 p.m.).

The DWD warns of gusts of wind (yellow) and squalls (orange) in Bavaria.

Eugen has moved on.

It left behind rain and little spring-like temperatures around ten degrees.

This is unlikely to change in the coming days.

The cold and damp weather will stay in Bavaria until the weekend.

Then comes the big change in the weather.

The rain ends on Saturday.

The sky clears up and the sun shines from the sky in almost all of Bavaria.

Only in the far north-east can a few clouds still creep in between.

It is already pleasantly warm with 16 degrees in Augsburg * and Nuremberg * and fresher eleven degrees in Hof.

The display on the thermometer on Sunday makes a real leap up.

There are then 25 degrees and more across Germany.

For Upper Bavaria, Middle Franconia and Lower Franconia, values ​​around 27 degrees are predicted.

But as soon as summer came, it will probably also disappear again.

It will be cold and rainy again on Tuesday.

Weather in Bavaria: Storm Eugen pulls over the Free State

Eugen is still raging in Germany, Bavaria was and is affected by warnings from the German Weather Service (see previous updates).

Now there are new warnings - also for the state capital.

In Munich and the surrounding area, gusts of wind at speeds between 50 and 60 kilometers per hour threaten on Wednesday between 12 p.m. and 7 p.m.

The DWD warns all of Bavaria.

Almost all of Bavaria was affected by a storm warning on Tuesday (see previous updates) - some parts are still there.

Munich and the surrounding area are back in the green area on the warning map of the German Weather Service (DWD).

But northern Bavaria (until 7 p.m.) and the Alpine foothills (until Wednesday at 6 a.m.) are still affected by a warning.

There are gusts of wind up to 80 kilometers per hour.

In some parts of Bavaria, the DWD is still warning of gusts of wind.

The weather warnings for Bavaria continue.

The German Weather Service (DWD) warns of “striking weather” in almost the entire Free State - a level 2 warning. Only the Rosenheim district and the region around Passau are spared possible gusts of wind.

Note on possible dangers: For example, individual branches can fall.

Pay particular attention to falling objects, ”is another advice from the weather service.

Severe weather warning for Bavaria from noon: Some regions affected

Munich - May began last weekend in many places with a little rain, but also sunshine in between.

With temperatures just over 10 degrees it was relatively fresh.

No wonder, as April * said goodbye with cool temperatures, on one day the coldest temperature since 1929 was measured.

In the middle of the first week of May it is now uncomfortable and not very spring-like in large parts of Germany and Bavaria.

A storm depression * in northern Germany also affects the weather in Bavaria.

According to the DWD, a storm warning will apply from Tuesday noon for many regions in Bavaria, including the very south.

While the extreme east of Bavaria will not be affected, you have to reckon with wind gusts of up to 60 km / h * in the rest of Bavaria and also in the south in districts such as Weilheim-Schongau, Munich, Starnberg, in exposed locations the wind is even faster .

Weather in Bavaria: A storm is to be expected at the edge of the Alps

The warnings are valid until Tuesday evening (May 4th).

From Wednesday (May 5th) the weather will calm down and it will remain rainy.

Storm warning for Bavaria: Heavy thunderstorms are approaching - then the weather changes 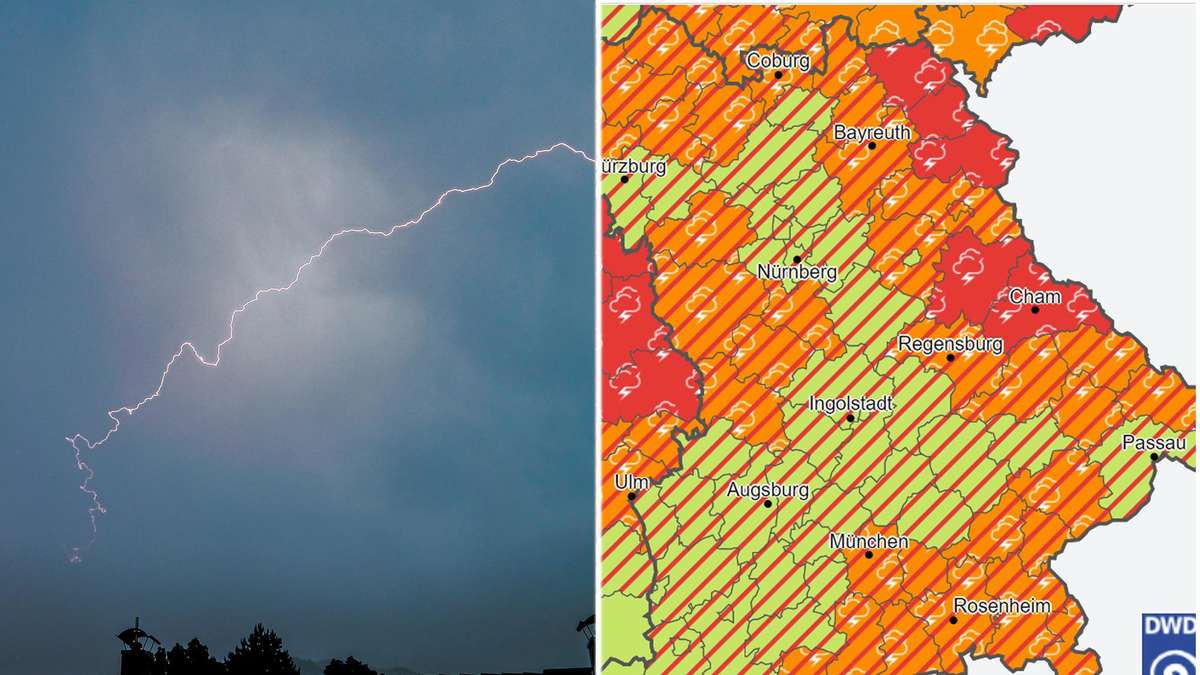 Authority warns of severe storms across Bavaria on Thursday Weather in Munich: Spring takes a break at Easter - there is even a threat of thunderstorms, snow and freezing temperatures “April 2.0” hits the Free State: Sunshine and no clouds - then rain and thunderstorms