In the coming days, a series of mass events will be held in the Old City, against the background of tensions in the east of the city. Many policemen will be deployed ahead of last Friday prayers for Ramadan

Fear of flare-up in the capital: preparedness for the events of the end of Ramadan and Jerusalem Day

In the coming days, a series of mass events will be held in the Old City, against the background of tensions in the east of the city.

Many policemen will be deployed ahead of last Friday's prayers for Ramadan, while more than 100,000 people are expected to gather on the Temple Mount on Saturday.

In the coming days, a series of mass events will be held in the Old City of Jerusalem due to the end of Ramadan and Jerusalem Day, which will take place next week. The events will take place against the background of tensions and vigilance in the east of the city and in particular in the Sheikh Jarrah neighborhood, where clashes between residents and police are taking place tonight (Thursday), against the background of the desire to evacuate Palestinian residents from their homes for Jewish residents.

During the clashes tonight in the neighborhood, seven people were arrested. Police cleared the street and required residents to enter their homes. Meanwhile, in the shadow of the tension, MK Itamar Ben Gvir (Jewish Power) announced that he was moving his office to the neighborhood, and even set up an improvised shed near a house on a street where Jews live.

Residents in Sheikh Jarrah informed the Supreme Court today that they had not reached an agreement with the Nahalat Shimon company, which is demanding that they evacuate, and Judge Dafna Barak Erez will have to decide whether to accept the appeal request and hold another hearing on the matter.

This, after district court and magistrate court rulings ruled that the tenants must vacate, because the land was Jewish-owned and sold to Nahalat Shimon.

Due to the clashes in Sheikh Jarrah, the leader of Hamas' military wing, Muhammad Daf, warned this week that Israel would pay a price "if the aggression is not stopped" against the residents of the neighborhood.

Several protesters are arrested in demonstrations every evening after clashes with police, who in turn disperse the crowd with a skunk and cavalry.

Tensions are adding to the events at the Nablus Gate about two weeks ago, when checkpoints were set up by the police in the stairwell leading to violent clashes, which ended with the removal of fences.

Large police forces will be deployed tomorrow in the Old City ahead of last Friday prayers for Ramadan, and tens of thousands are expected to arrive at the site to pray.

Due to the corona, the entry of Palestinians from the West Bank will be limited to only 10,000 vaccinated.

Another major event to be held is the 'Night of Al-Qadr', which will be celebrated on Saturday night and symbolizes the day the Qur'an was given to the Prophet Muhammad.

During the event, more than 100,000 people are expected to gather on the Temple Mount.

The IDF has not yet announced exactly how many Palestinians from the West Bank will be allowed to enter Israel for the event. "In order to allow quick entry at the gates of the Old City and freedom of worship for the hundreds of thousands of Muslims who will come to prayers on the Temple Mount and hold the holiday shopping, along with maintaining public order, security, guidance and regulating traffic."

Clashes over evictions in the neighborhood have resumed.

Tensions in the capital will continue next Monday, when Jerusalem Day will take place.

In the last days of Ramadan, the Temple Mount was closed to Jews, but right-wing organizations that encourage immigration to the compound hope that the situation will change on the holiday, as it was in 2019.

The activists also publish calls to arrive at the site with the caption "Do not submit to the Jordanians' demands to close the mountain to Jews."

Another event that increases the tension is the flag parade that is held every year on Jerusalem Day, and includes national religious marches, including from the Nablus Gate to the Western Wall.

In 2019, a petition against the passage of the parade in this area was rejected due to Ramadan, after the police clarified that it has the ability to prepare as required.

The atmosphere in Jerusalem is burning up Judea and Samaria, and the defense establishment is failing to isolate the fire - Walla! News

Fear of burning the area following the flag parade: The level of alertness in the air force has risen - Walla! News

US Embassy on riots in Jerusalem: Hopefully various parties will call for an end to incitement - Walla! News

Record preparation by the police for Jerusalem Day; The flag parade is expected to take place in the Muslim Quarter - Walla! news

Tensions in Jerusalem: Checkpoints have been set up in the Sheikh Jarrah neighborhood, preparations for renewed clashes - Walla! news 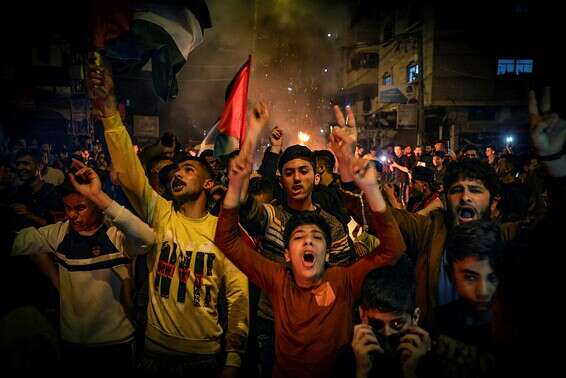