The incidence in Munich is still below 100. Now easing beckons from Wednesday. The numbers continue to decline throughout the Free State. All news in the ticker for Bavaria.

The incidence in Munich is still below 100. Now easing beckons from Wednesday.

The numbers continue to decline throughout the Free State.

All news in the ticker for Bavaria.

Now the confusion is complete.

Apparently, the Munich relaxations for outdoor catering will only come into force on Wednesday - although the seven-day incidence is already below the 100 mark for the fifth day in a row.

Background: The Ministry of Health calls for two days of “parental leave” for the relief;

one would have been enough for the city of Munich.

Among other things, beer gardens should have been able to open from Tuesday.

Prime Minister Markus Söder (CSU) has now defended his decision in Bavaria to actually make openings for tourism companies and hotels possible from May 21st in an interview with “Welt am Sonntag”.

The Bavarian special route, which is supposed to enable the Whitsun leave in regions with a stable seven-day incidence below 100, is therefore particularly important "also for the soul of the people", according to Söder.

After all, at Christmas and Easter one had to forego vacation.

It is still unclear in which regions the vacation will actually be possible.

So far, large parts of Bavaria are still above the incidence of 100 - but the trend is falling almost everywhere.

Corona in the Free State: Munich is about to relax the measures - incidence continues to fall

Reason to be happy in Munich: On the fifth day in a row, the RKI (as of May 9th, 3:12 am) shows a seven-day incidence value of less than 100 for the state capital. At 91.2, the value is also lower than the previous day (92.3). For the city of Munich, this means that tomorrow, Monday (May 10), those responsible for the city of Munich will announce the relaxation of the corona measures, which will take effect from Tuesday (May 12). In Munich, a total of 164 new corona infections were reported within 24 hours. Two other people died of Covid19 disease.

In the entire Free State, the incidence is currently 118.7 and thus only slightly above the national average of 118.6.

In the past 24 hours, new corona infections and 20 new deaths related to the virus were reported in 2011.

The city of Passau has the lowest incidence value in the Free State with 26.5, followed by the districts of Neustadt an der Waldnaab with 34.9 and Tirschenreuth with 47.2.

The corona numbers have been falling for days not only in the state capital, but in the entire Free State.

This development brings welcome relaxation: Beer gardens are allowed to open again in the first regions of Bavaria on Monday.

Corona easing in Bavaria: In some regions beer gardens are allowed to open from Monday

In the said rural districts and urban districts, the incidence is stable below 100. In plain language this means: five days in a row. After that two days are planned for implementation, on the eighth day it is allowed to open. In other areas these openings are imminent. An overview of beer garden openings in Bavaria can be found here.

The state capital has published the current corona figures on Twitter. In addition to the already known incidence of 92.3 (see first report), the city stated that there were no new deaths. The proportion of mutations is currently 91.7 percent. As of Friday (May 7), 586,759 vaccinations were carried out (454,973 first and 131,786 second vaccinations). "The Munich vaccination quota, based on the population aged 16 and over, is 35.8% for the first vaccination and 10.4% for the second vaccination (total Munich population 30.7% / 8.9%)." the city too.

If Munich is below the limit of 100 on Sunday, easing is possible from Tuesday.

Beer gardens open on Monday in some districts and cities in Bavaria - but where exactly?

You can find an overview here. *

Bavaria's Minister of Health Klaus Holetschek wants the best possible use of vaccines without any waste in the fight against the corona pandemic.

"It is technically and legally possible to take a seventh or eleventh dose from the vaccine bottle, depending on the manufacturer," as the CSU politician said in Munich.

The President of the Bavarian State Medical Association, Gerald Quitterer, also supports the use of all available vaccine doses, which is also recommended by the Federal Ministry of Health.

“With the doctors and in the Bavarian vaccination centers, taking additional doses of vaccine has been a practice for a long time and it is proving its worth every day.

I call on the vaccinating facilities to continue to use this option, ”emphasized Holetschek.

The vaccinating doctors would not have to worry about a change in liability, as they would ultimately have to be sure that they had drawn the correct amount into the syringes for each dose.

Corona vaccinations in Bavaria: Minister Holetschek does not want to do without a drop of vaccine

The prerequisite for the maximum utilization of the preparations is that the amount of vaccine required by the respective manufacturer can be completely and quality-assured can be taken from an injection vial. The vaccinating doctor must ensure this, Holetschek continues. “It is also important that the vaccine must not be mixed from several bottles.”

And further: “Vaccinating doctors act responsibly and professionally, regardless of whether it is the first, third, sixth or possibly the seventh or eleventh syringe . These are professionals who know what they're doing, and that doesn't raise the question of legal concerns. "

According to Holetschek, doctors can order these in the usual way through pharmacies.

Bavaria has already procured the appropriate syringes and cannulas for taking the sixth dose since January and given them to the vaccination centers - thus creating the technical feasibility.

Corona incidence in Munich continues to fall: Easings are imminent - other cities in Bavaria are already opening

Munich is heading for easing soon. The incidence has been below the limit of 100 for four days. If the state capital is also below this on Sunday, there will be openings from Tuesday (see first report). Passau is one step further. According to the RKI, the Lower Bavarian city has the lowest incidence in all of Germany on Saturday at 20.8.

As the Three Rivers City writes on its website, the Bavarian state government “gave the necessary agreement” on Friday evening. This means that the City of Passau can define further opening steps in a new general decree.

From Monday (May 10th) the following applies: The opening of the outdoor catering is permitted, visitors must book an appointment in advance, and contact tracking must be documented.

: Munich - good news for the state capital. The Corona * situation in Munich seems to be relaxing. The Robert Koch Institute * reports a seven-day incidence below 100 for the fourth day in a row. On Saturday it was 92.3 (previous day: 94.1). This means that relaxation of the corona measures is within reach for Munich. Because: If a city or a district is below 100 for five days in a row, easing applies from the day after next - i.e. from Tuesday, if Munich falls below the value on Sunday.

In the event that the incidence is below 100 on Sunday, the city is preparing a general decree, “so from Tuesday, 11.5.

Outdoor catering, theaters, concert halls, opera houses and cinemas can reopen and contact-free indoor sports and outdoor contact sports are possible again. ”This can be read on the city's website.

Corona in Bavaria: Munich incidence below 100 - easing within reach?

So, for example, the night curfew could soon be lifted in Munich.

In addition, the government around Prime Minister Markus Söder announced further opening steps at the beginning of the week - you can find an overview here *.

Probably of particular interest: the opening of the catering industry.

If the incidence is stable below 100, outdoor dining is possible.

Please note: A circle must be below 100 for five days, followed by two days for the announcement and preparation and on the eighth day in total the outdoor catering can then be opened - but only with the consent of the Ministry of Health, reports the

The opening permit must be applied for there.

The district of Tirschenreuth has shown the way.

If he was still badly hit by the first two corona waves, the outdoor catering opens there on Monday.

The incidence there has been below 100 since April 14.

If the incidence is stable below 100, theaters and cinemas can also be opened.

The following applies to schools: In future, primary schools will remain open in all classes up to a value of 165 - as provided for in the federal emergency brake.

In the higher schools, there are still more than 100 distance teaching.

The city has a value of 302.0 and thus has the third highest incidence in all of Germany.

After Söder's government announced that it would relax: “Great hectic pace” and some open questions 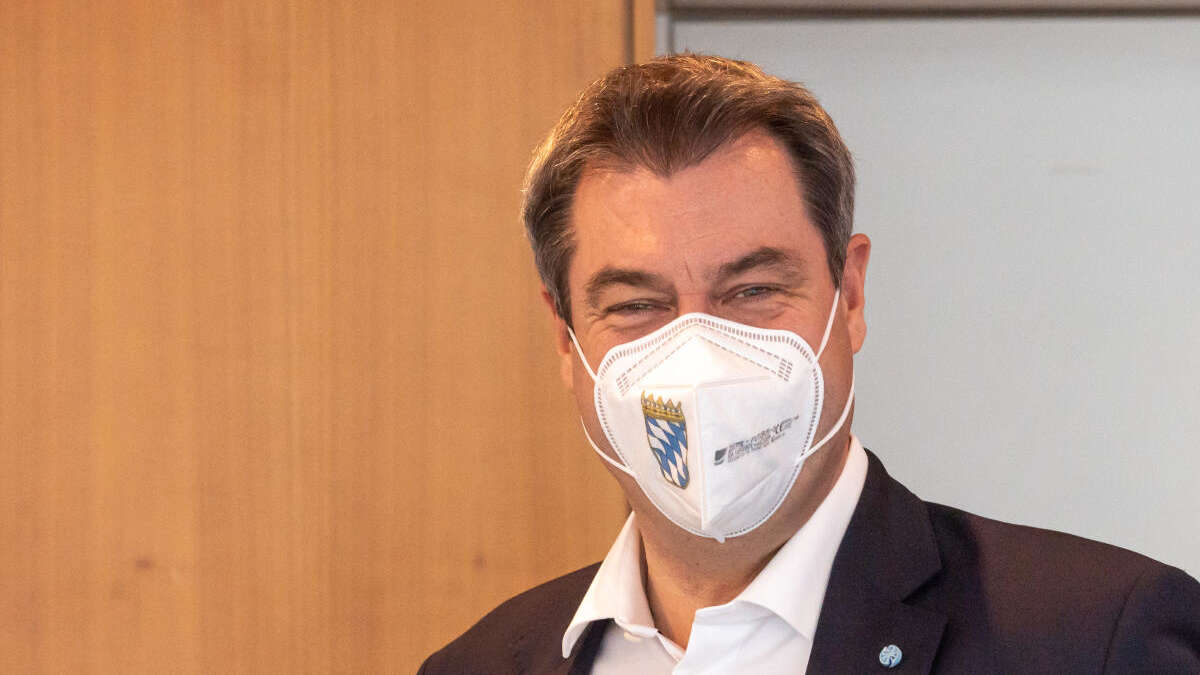 After Söder's government announced that it would relax: “Great hectic pace” and some unanswered questions