Can the coronavirus be completely controlled through vaccinations? A large-scale secret project in Brazil gives hope. Can the coronavirus be completely controlled through vaccinations?

Serrana - In Germany the corona numbers are going down, but elsewhere in the world worries about the virus and its new mutations are piling up.

Brazil is particularly hard hit by the pandemic.

But a small town that became a living laboratory through a secret mass experiment is completely excluded from this: Serrana near Sao Paolo - the vaccinated city!

There is corona chaos elsewhere in the country - not here.

The city's shops are open, the buses are full: "Everything is open again and we are very relieved, the whole city is grateful," said resident Aline Rosa Lopes of

An experiment that gives hope. Of the 45,000 residents, 28,000 people were secretly vaccinated with two doses of Coronavac ("Sinovac" from China) between February and April; there is now talk of 97 to 98 percent of healthy adults. The result of the “Projeto S”, the “vaccination project S”, makes researchers cheer: “We can confirm that it is possible to control the pandemic, not only in the laboratory, but in the real world,” explained the medical director of Study, Ricardo Palacios, at the presentation.

Palacios continues: "The key to this is the vaccination, also against variant P.1." P.1 is the "Brazilian mutant", which is far more aggressive than the "conventional" Covid. The vaccination also helps those who are not immunized: "The adults spread a protective screen over the unvaccinated children," said Palacios. The study was carried out by the renowned Sao Paulos Butantane Institute, which produces the vaccine itself.

Palacios spoke to the news broadcaster

about an unsteady course: “During the first phase of the mass vaccination, the cases initially went up.

Then, when we started giving the second dose of vaccine, they went down significantly. ”Meanwhile, the mortality rate has fallen by 95 percent, while there is strict lockdown in neighboring cities.

Serrano is a veritable island in corona-stricken Brazil, where around 60,000 new infections and 2000 deaths are registered every day and the incidence value is over 200. The right-wing President Jair Bolsonaro is under massive international criticism because he actively acted against protective measures and spread false information, which the researchers in Serrano also faced.

: "Many vaccination myths are spreading in the social networks, they leave people full of doubts". Sometimes they went from door to door to convince people to take part in the project. The great secrecy was supposed to prevent a mass influx and keep the conditions as normal as possible. Nationwide, just over ten percent of people are vaccinated. Many of the residents are commuters who have had a lot of contact with the environment, where almost no one is vaccinated. This is one of the reasons why the project gives cause for hope. 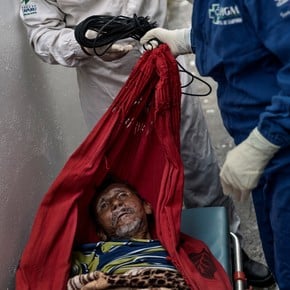