Found in the same place as those of Christian Rodríguez, which appeared last year, these new bone fragments deepen the uncertainty about what happened to the students 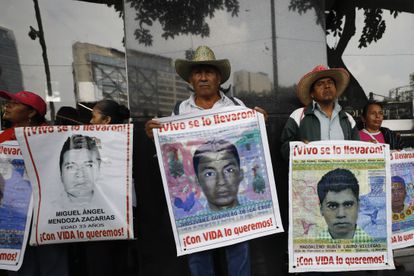 Margarito Guerrero holds a poster with the image of her son, Jhosivani, in a march.Rebecca Blackwell / AP

Stagnant for years, the investigation of the

progressing hand in hand with the current prosecutor's office, which in just two years has found remains of two of the 43 missing normal students and has earned the respect of their families, who are very critical of the previous administration. This Tuesday, researchers have announced the discovery of skeletal remains of Jhosivani Guerrero. The genetics laboratory of the University of Innsbruck in Austria has confirmed his identity. The new bone fragments appeared in the same place where the prosecution found Christian Rodríguez's remains last year, the La Carnicería ravine. Since 2014, authorities have identified the remains of three students.

Ignored during the Government of Enrique Peña Nieto (2012-2018), La Carnicería thus appears as the epicenter of the investigations, not so much because of the data it can provide from now on, but because it illustrates the spirit of a new narrative, barely enunciated by caution. Sources close to the investigation point out that the most "logical" thing is that the boys were separated during the attack, on the night of September 26 and early in the morning of September 27, 2014, in Iguala, in the state of Guerrero. Once separated, the aggressor group, made up of criminals from the Guerreros Unidos criminal network and agents from different security forces, would have taken the boys to different places instead of just one, the garbage dump in the neighboring municipality of Cocula, base of the version given by the authorities during the Peña Nieto years.

Another issue that has gained relevance over the years is the multiplicity of security forces involved in the attack. It was not only the Iguala and Cocula police who coordinated with Guerreros Unidos, as the Peña Nieto administration pointed out at the beginning. Other corporations were directly involved in the attack and disappearance of the students, a case of the Huitzuco police. Others avoided acting, knowing that the normalistas were in danger, in the case of the Federal Police. And then there is the Army, whose role remains blurry. Military patrolled the streets before, during and after the attack and never helped the boys. Some students even denounced that the military intimidated them after the first attack, when they were taking refuge in a hospital.

Of an opaque nature, the Ministry of Defense has resisted collaborating with investigators in recent years. Their relationship has been complicated and in just the last three months he has opened the door to his archives. According to sources close to the investigation consulted in the last month, the intervention here of the president, Andrés Manuel López Obrador, has been essential for the Army to yield. Investigators have had access to documents from the Iguala and Teloloapan battalions, as well as the archives of the area and the military region. The documents found there could help shed light on his role on the night of the attack and in the days after.

The motive for the attack remains a mystery. The previous government suggested that the attacking group had confused the normalistas with an enemy gang, even that part of the normalistas were part of that gang. Over the years other hypotheses have appeared. The most widespread is that the students tried to take buses of the line that Guerreros Unidos used to transport heroin to the United States. Taking buses is typical of normal school students, who use vehicles to go to marches and meetings. In 2014, Ayotzinapa students went to Iguala to take buses and then move to Mexico City, on the occasion of the commemoration of the 1968 Tlatelolco massacre.

Without being ruled out, the prosecution lacks evidence to prove the heroin trafficking theory. The group of experts commissioned by the Organization of American States to Mexico to investigate the case has indicated the need to deepen this matter. One of the keys could be an open process against a cell of Guerreros Unidos in the US years ago, led by Pablo Vega. The justice of the neighboring country had intercepted the communications of Vega and his cronies the night of the attack. In 2018, the Mexican prosecutor's office received information about these communications, but hardly clarified anything. A couple of weeks ago, López Obrador pointed out that the United States had sent new information about the investigations opened there.However, a source close to the investigation consulted in this regard indicates that what was sent is "the same as that received in 2018". That is, communications intercepted to members of the criminal network that do not contribute anything new.

Guerrero is the third student identified after Rodríguez and Alexander Mora. The remains of the latter appeared in October 2014 in the San Juan River, next to the Cocula garbage dump, the main setting for the narrative aired during the previous administration. According to this version, the students were killed and burned there. Later, the criminals would have thrown the remains into the San Juan River. The discovery of Mora's bones in the river, in the first weeks of the search, supported the version of the garbage dump and shelved the investigations.

Despite questions from independent investigators, the prosecution did not move from there for years. The Argentine Forensic Anthropology Team and the group of experts commissioned by the Organization of American States in Mexico concluded that the Cocula garbage dump had not housed a bonfire with the capacity to burn 43 students. They also pointed out the strange circumstances of the discovery of Mora's remains, located without the presence of any of them. The investigation was at a standstill from mid-2015 until the changing of the guard, almost five years later.

The paradox now is that the findings of the last two years paint a picture of new uncertainties.

Located 800 meters from the garbage dump, the Carnicería ravine erases the traces of the old narrative, but implies the appearance of new questions that are difficult to answer.

The first, how did the remains of two of the 43 get there?

Second, in what other places could there be remains, if any? 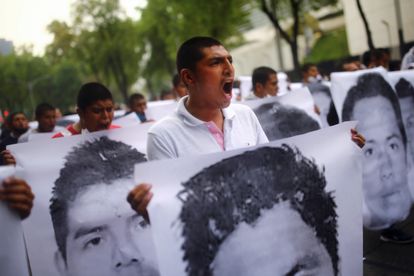 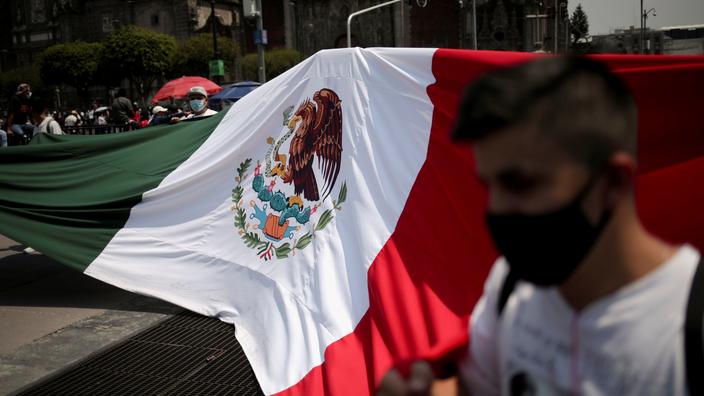 Disappearance of 43 students in Mexico: identification of the remains of a third victim 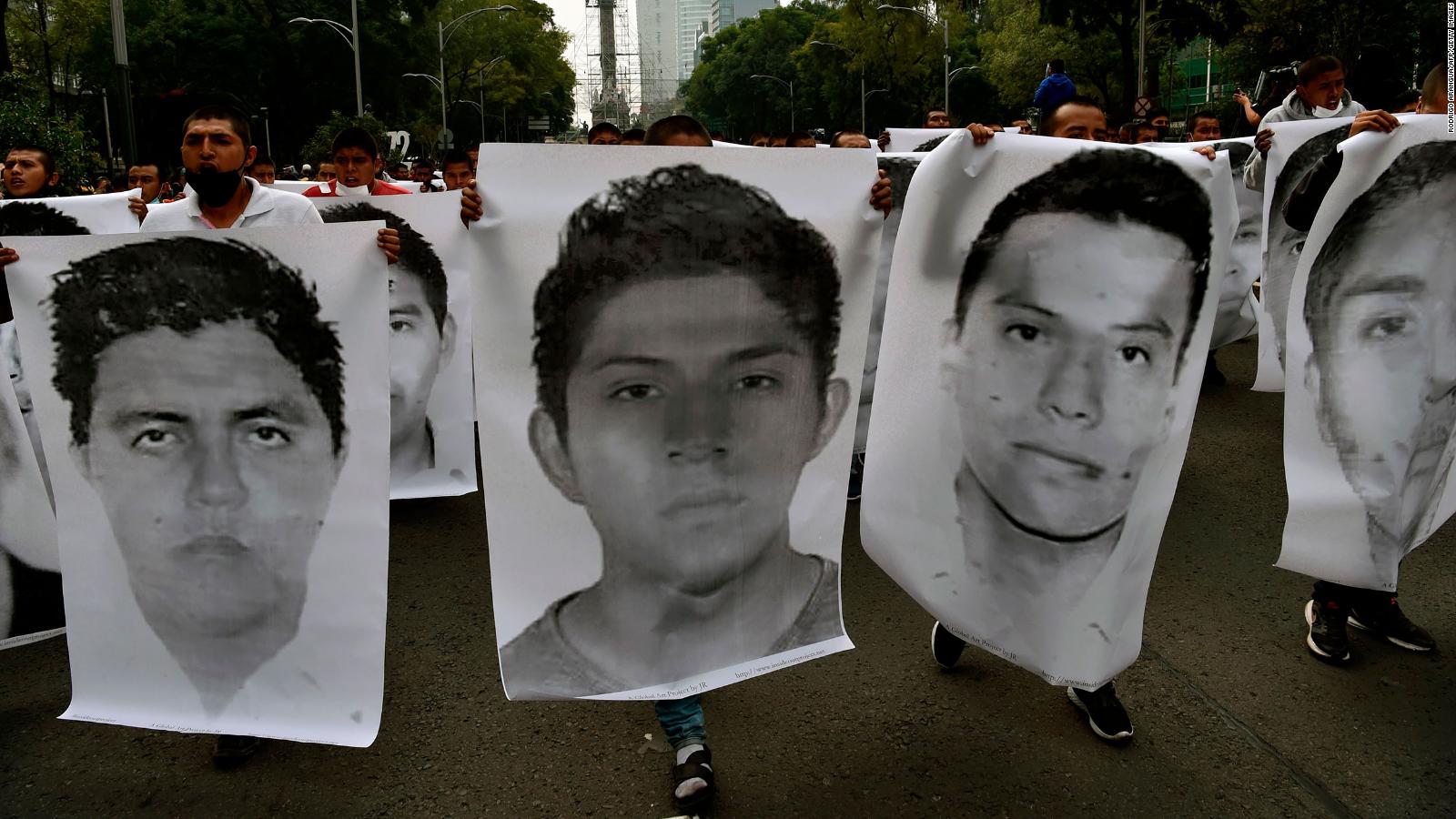 Ayotzinapa: who are the 3 normalistas identified so far? 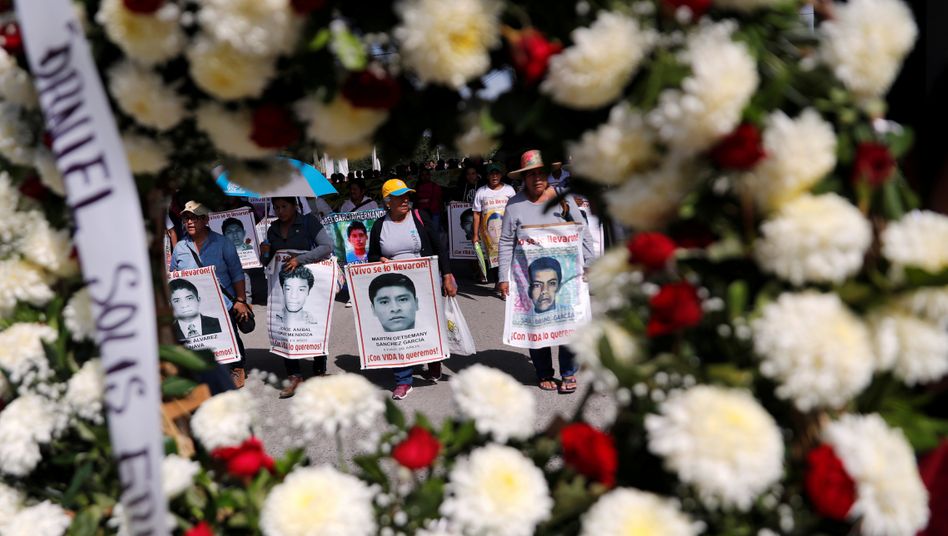 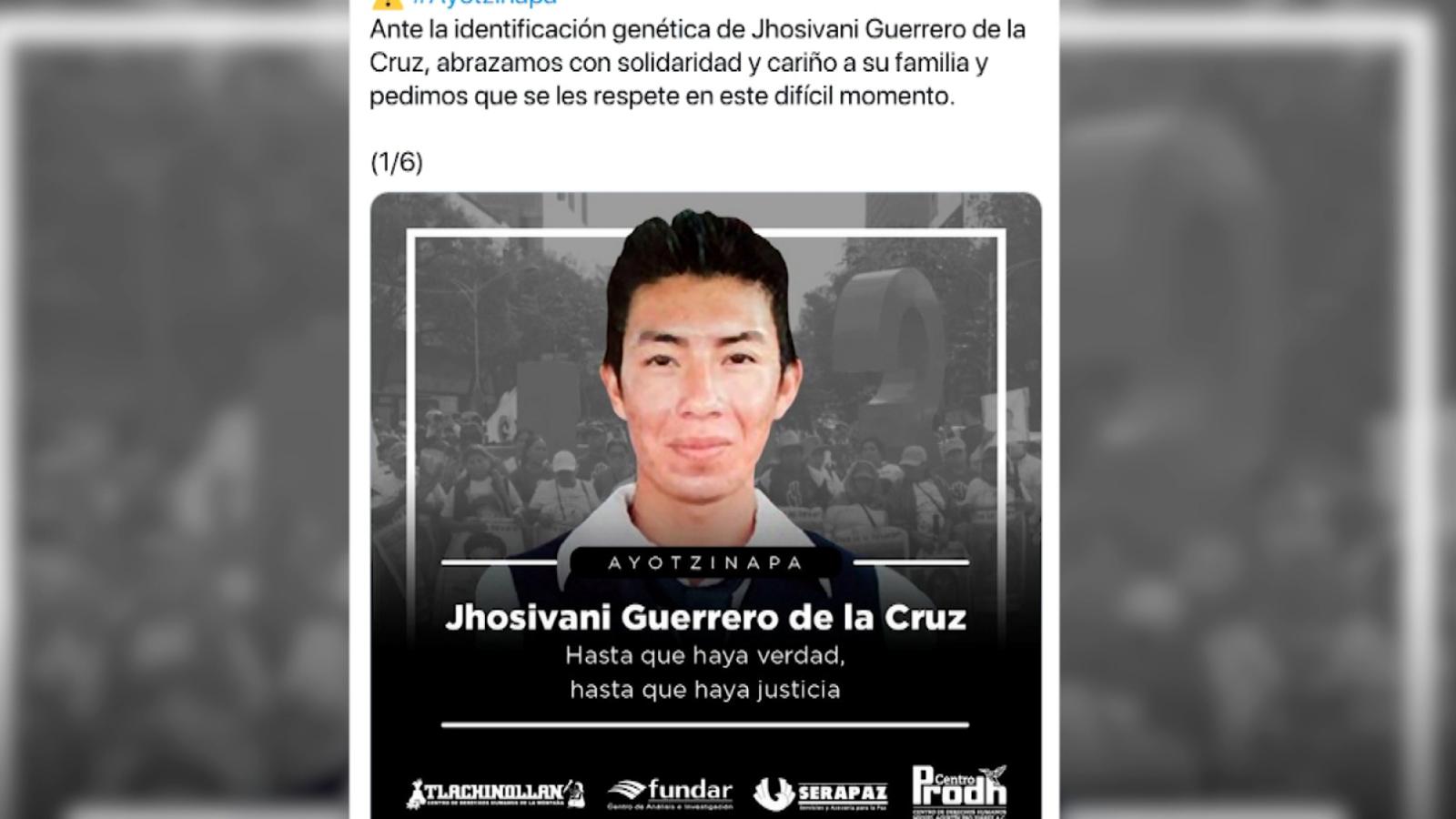 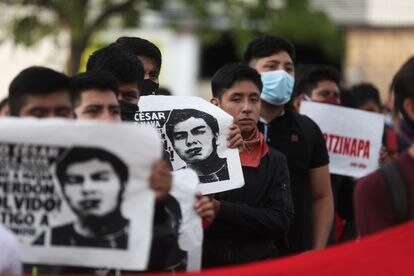 The CNDH questions its own actions in the 'Ayotzinapa case' 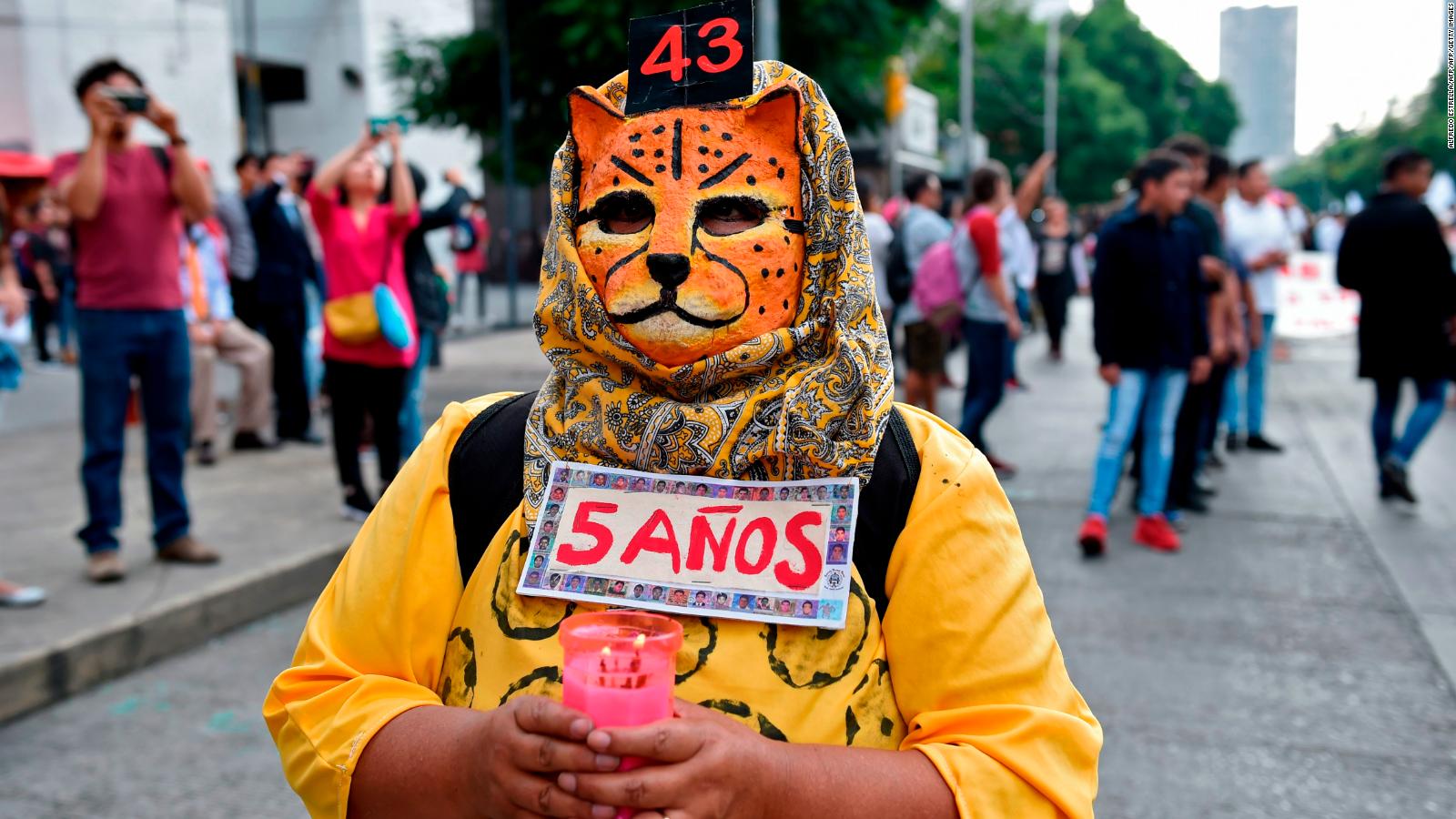 Government reveals the latest advance of the Ayotzinapa case 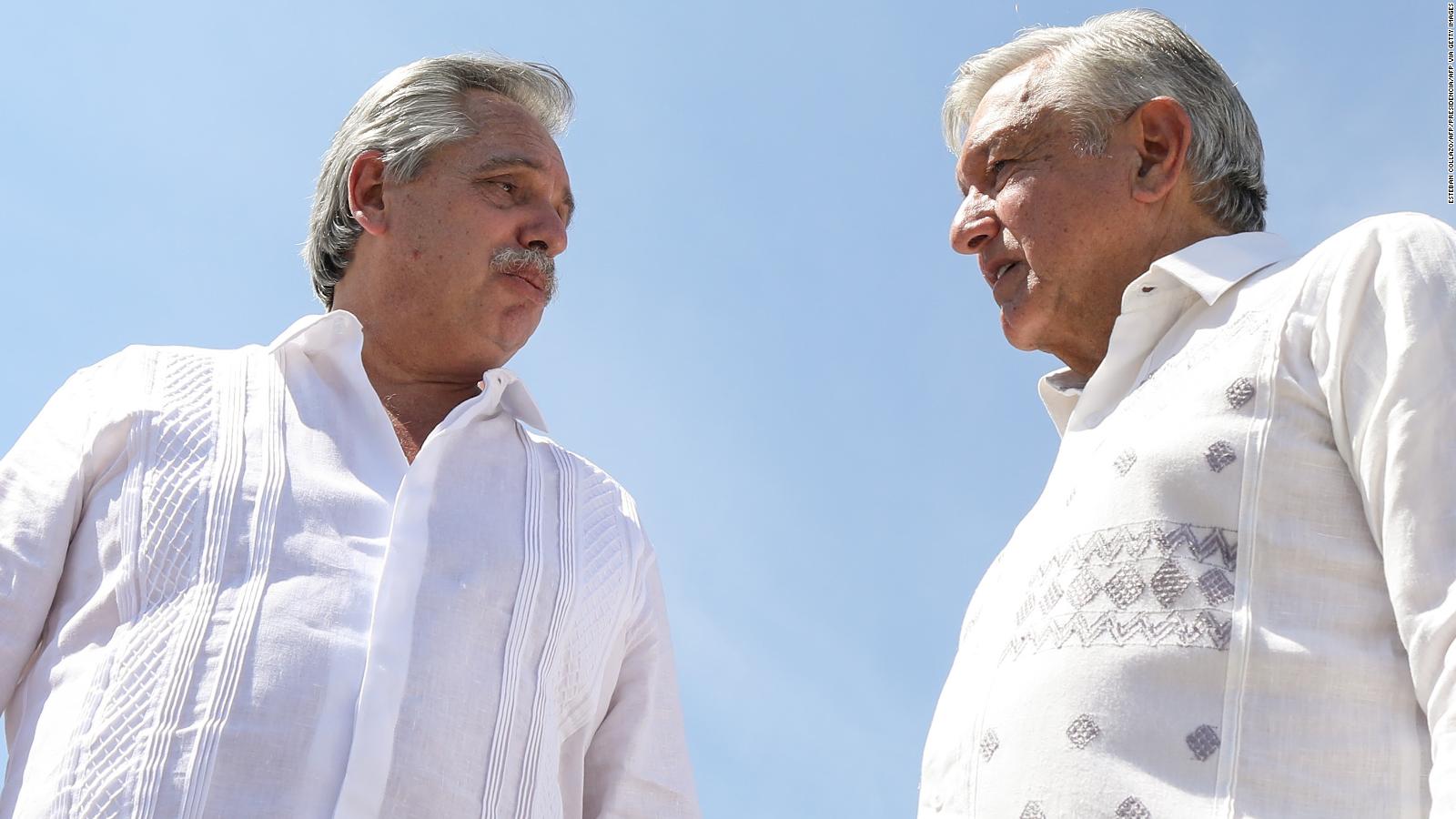 President of Argentina participates in Flag Day with AMLO in Iguala, the city where the 43 from Ayotzinapa disappeared | Video | CNN