“Out with Bolsonaro”, the cry of hundreds of thousands of people in a march throughout Brazil 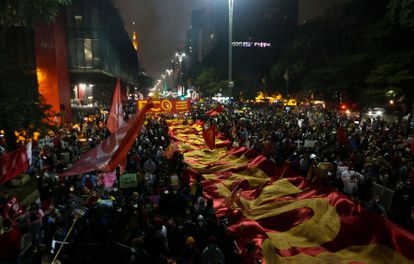 Demonstration against the president of Brazil, Jai Bolsonaro, on Paulista Avenue in São Paulo, this Saturday.PAULO PINTO / AFP

Brazil took to the streets again this Saturday to demonstrate against President Jair Bolsonaro, precisely on the day that the country reached the mark of more than 500,000 deaths from coronavirus. Again, the flags of unions, parties and collectives colored the streets of various capitals, especially São Paulo, Rio de Janeiro and Brasilia, where the marches were massive. In São Paulo, people began to gather at four in the afternoon on Paulista Avenue and an hour later the protesters occupied nine blocks.

With banners, T-shirts and stickers calling for the president's departure, the protesters, most of them wearing masks, tried to swell the ranks of the revolt against the current panorama of the coronavirus pandemic. In addition to the 500,000 deaths from covid-19, the slowness of vaccination, the return of emergency aid of 600 reais, unemployment, the neglect of education and the environment, and the use of violence against the population black were the slogans in the streets. Sociologist Dulce Neri, 71, had not attended the May 29 protest for fear of crowds. But he decided to join this Saturday. He came with his daughters and his grandson. "It is impossible to stay calm at home with 500,000 dead and this misrule," he said on Avenida Paulista.

"The worm killed my grandfather," read the sign Clayton carried.

Get out genocidal, ”wrote Francisco, 24, on a card.

“I lost my father three months ago.

He had been fighting cancer, but unfortunately, because of this genocidal man in power, he contracted the virus and died, ”he says, and starts to cry.

"I am here for all the lives we have lost and against this government."

The Government chose to contradict the scientists' recommendations, which led Bolsonaro to fire two Health Ministers -Luiz Henrique Mandetta and Nelson Teich-, to keep an active general who endorsed his erratic policy of the president, until reaching the current minister, Marcelo Queiroga.

Queiroga has achieved independence to defend the use of the mask and confinement, showing himself closer to science. But above him is a president who continues to go to the acts without mask protection, while spreading false theories about the pandemic. A few days ago he said on his

that getting infected with the virus was more efficient than the vaccine. The distance between the president and his minister became clear again on Saturday. While Queiroga sympathized with the 500,000 killed by covid-19, Bolsonaro preferred to greet the policemen who were trying to arrest the murderer Lázaro Barbosa, who has been on the run for 11 days in the Federal District.

The streets of Brazil are moving and the political class is trying to tune in to their demands. The senators investigating Bolsonaro for handling the pandemic took advantage of the date to commit to making those responsible for part of the half a million deaths "pay for their mistakes, omissions, contempt and debauchery." “We have not arrived at this devastating and inhuman image by chance. There are culprits and they will be punished in an exemplary fashion. Crimes against humanity, murders and genocides are not erased, nor do they expire. They are eternal and, before divine justice, they will meet the justice of men, ”says a text signed by nine senators.

Former president Luiz Inácio Lula da Silva hinted that he would participate in the protests, but ultimately did not attend. In the acts, however, his name was the most remembered. Several people wore T-shirts of the Workers' Party or of Lula. Friends Thayná Ferreira, 25, Fernando Siqueira, 28, and Daniel Felício, 22, each carried a PT flag wrapped around their bodies. "I graduated because of Lula and my parents have a popular house because of him," said Daniel, who is an advertising executive. The presence of the unions may explain the predilection for Lula. There were no flags or stickers of other opponents of Bolsonaro.

However, not all of them took to the streets thinking about the 2022 elections. Giovane Gonçalves, 24, works in the Santo Amaro sub-prefecture, but since times have been “tough”, he complements his income as an application delivery person. “We are here in the fight against this mismanagement of Bolsonaro and for the dead. I even had relatives, uncle and cousin, who died because of this anti-vaccine mismanagement, denier ”. He says that his life has been a "chaos" also due to the economic issue. That is why it awaits the departure of the president as soon as possible.

There were also messages for the vice president, Hamilton Mourão, and the military.

Some banners included "Out with Mourão" and "Out with Bolsonaro and his generals," at a time when the Armed Forces increasingly support the president and there are insistent attacks on democratic pacts in different areas.

Bolsonaro's removal remains an expectation for his opponents.

But there are those who look further, until 2022. "Although we do not overthrow Bolsonaro now, it is important to increase our strength to defeat him next year," said 70-year-old retiree Aldino Graef. 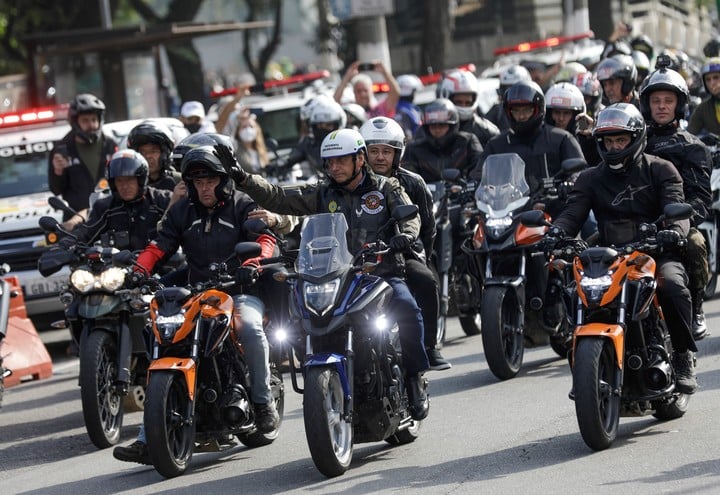 Covid-19: why is mortality exploding in Brazil? 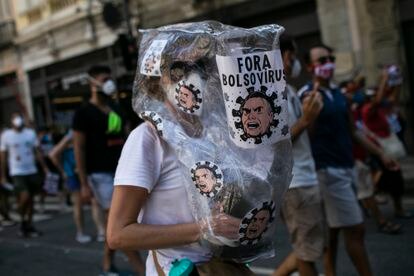 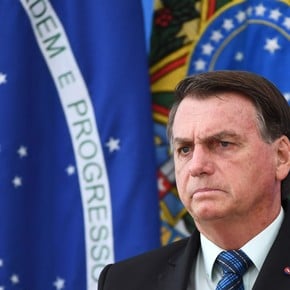 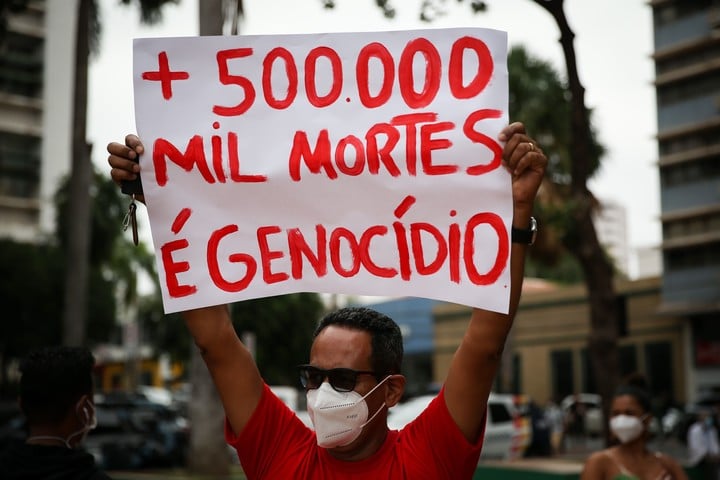 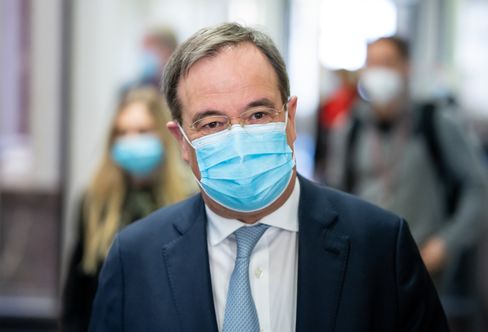 The morning situation - America, you're better off 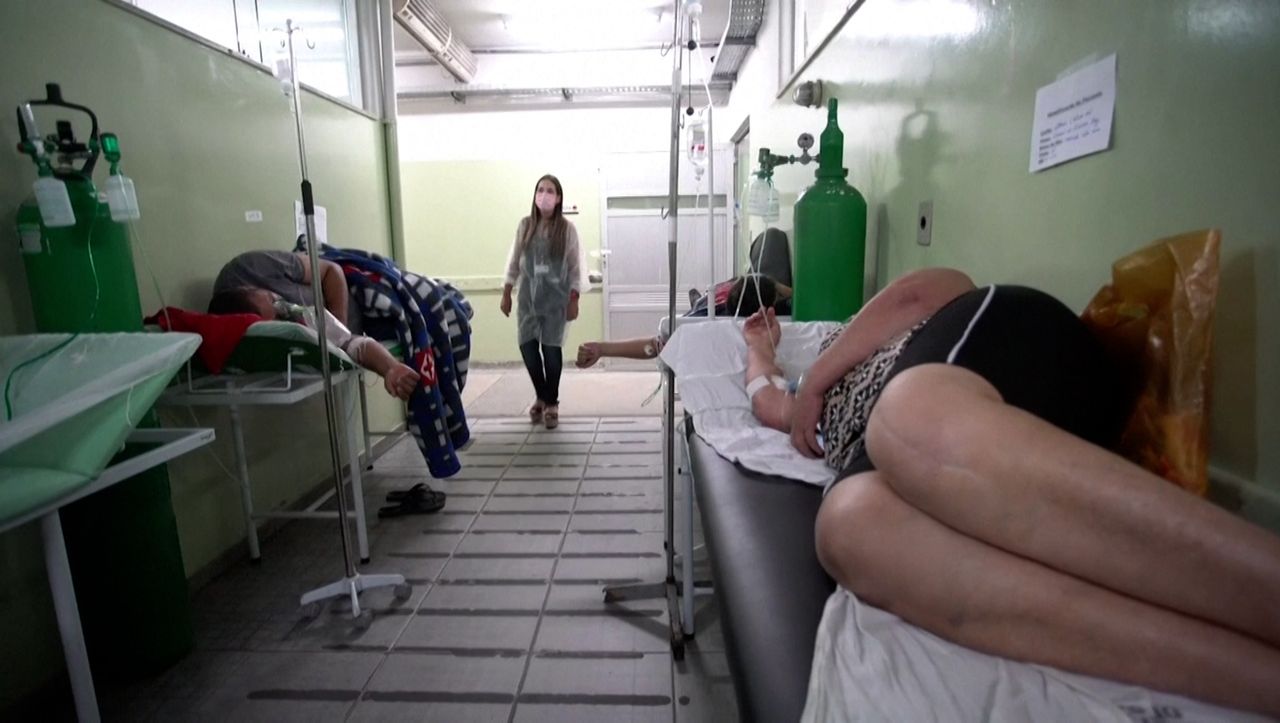