Here's what happens to your body in extreme heat, what to watch out for, and how to stay safe. The 5 hottest countries in America 0:37 (CNN) - The unprecedented heat wave that is scorching parts of North America has not stopped yet. More than 50 million people are under heat alerts Wednesday across the western and northeastern US, while high temperatures also continue to bake parts of western Canada. Lytton, British Columbia, hit 49.4 degrees Celsius on Tuesday, setting the Canadian heat 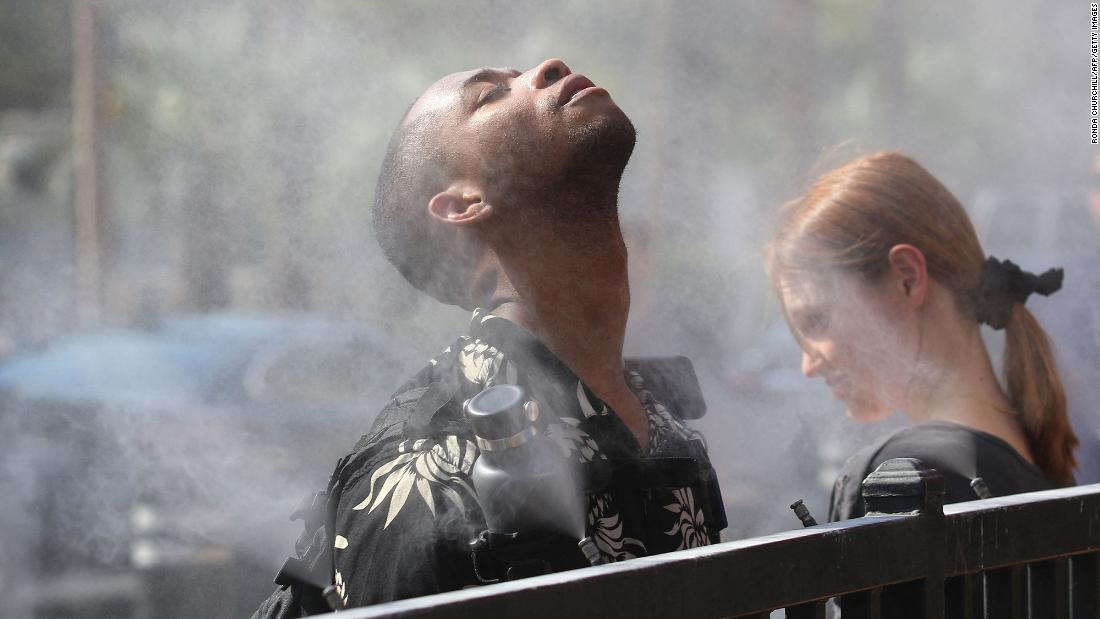 The 5 hottest countries in America 0:37

The unprecedented heat wave that is scorching parts of North America has not stopped yet.

More than 50 million people are under heat alerts Wednesday across the western and northeastern US, while high temperatures also continue to bake parts of western Canada.

Lytton, British Columbia, hit 49.4 degrees Celsius on Tuesday, setting the Canadian heat record for the third day in a row.

On the other side of the coast, Boston, Massachusetts tied and Hartford, Connecticut, broke its daily record, surpassing 37 degrees.

Sweltering heat is dangerous: Between 2004 and 2018, an average of more than 700 Americans died from heat-related causes each year, according to a report by the U.S. Centers for Disease Control and Prevention (CDC). approximately 90% of those deaths occurred between the months of May to September, according to the report.

Here's what happens to your body in extreme heat, what to watch out for, and how to stay safe.

What happens to your body?

Normally, your body is used to a certain range of temperatures, generally between 36 and 37.2 degrees Celsius.

When your brain detects a change, either lower or higher, it tries to help your body cool down or warm up, according to Dr. Judith Linden, executive vice president of the department of emergency medicine at Boston Medical Center.

“There are several different ways in which (the brain) tries to cool the body.

One way, the most common way we think of, is that you sweat, ”Linden said.

"The pores open, the body sweats and the sweat evaporates, that cools the body."

The second way your body cools is by dilating your vessels and increasing your heart rate, which helps bring heat and blood to the surface of your body and helps release that excess heat.

When you are exposed to high temperatures, it becomes more difficult for your body to try to keep up with the cooling.

And if your environment is hot and humid, sweat doesn't evaporate as easily, further raising your body temperature, according to the Mayo Clinic.

"The higher the humidity, the lower the temperatures are needed for extreme heat," Linden said.

Elevated body temperatures can cause damage to the brain and other vital organs, according to the CDC.

They can also cause various heat-related illnesses.

Mild heat-related illnesses, including heat cramps, are the most common, Linden said.

can develop in people who sweat a

lot, even during exercise.

Excessive sweating consumes all the salt and moisture in the body and can lead to muscle aches or spasms, usually in the abdomen, arms or legs, according to the CDC.

That's a skin irritation caused by sweating too much in hot, humid weather, and it's more common in young children, according to the CDC.

It's usually a red cluster of pimples or blisters, and it tends to be in places like the neck, upper chest, or the creases of the elbows.

When your body begins to exceed its ability to cool itself, it can develop what is known as

“In this case, you will see excessive sweating because your body is really going to try to keep up with that extra heat.

You'll feel groggy, you may feel dizzy, people often have nausea, headaches, and your skin often looks pale and clammy and your pulse is often fast, ”Linden said.

"This is the body's last attempt to cool down before actually entering a point of no return."

is the most serious heat -

related illness and, if untreated, can cause death.

Warning signs can include extremely high body temperatures, red and dry skin, rapid pulse, headache, dizziness, nausea or loss of consciousness, according to the CDC.

The hallmark of heatstroke is confusion and agitation, Linden said.

"So when someone is in the heat and gets confused and agitated, that is heatstroke until proven otherwise and you should call 911 for that or get help right away and get the person out of the heat."

Who is most at risk?

The elderly, people with chronic medical conditions, and children are at increased risk for serious heat-related illnesses.

The elderly and people with chronic medical conditions may be less likely to feel and respond to changes in temperature and may be taking medications that worsen the effects of heat, the CDC said.

He added that student-athletes and pets are also at higher risk.

"In this climate, you should never, never, never leave a child or pet in the car for even a minute," Linden added.

How to stay safe

When your community faces extreme heat, there are several things you can do to protect yourself and others.

First, be on the lookout for symptoms of heat exhaustion or other illnesses.

"If someone begins to feel lightheaded, dizzy, nauseous, or has a headache, now is the time to act immediately," Linden said.

"That means taking them out of the heat and into a cool environment."

Giving someone who may be experiencing symptoms water and giving them fluids can help cool them down.

If someone begins to lose consciousness or has nausea or vomiting, call 911.

"If you see someone in any kind of confusion, that's an immediate red flag," Linden added.

When it's hot outside, try to avoid outdoor activities, especially between 11 a.m. and 3 p.m., according to Linden.

If you have to go out, wear light-colored clothing, cover your head, and drink plenty of fluids.

Don't wait until you're thirsty to drink water, as it can be a sign of dehydration.

Linden recommends drinking at least one glass of water, or more, per hour.

"If you start feeling groggy, dizzy, sweaty, with a rapid pulse, get out of the heat immediately," Linden said.

Try to find air conditioning or places in your area where you can go to keep cool, according to Ready.gov.

Even spending a few hours at a mall or public library can help.

When you're home, fans can help, but don't rely on them as your only way to cool off;

While you may feel more comfortable, they won't help prevent heat-related illnesses.

«If you are in a very hot room, if you have a fan, is it useful?

No. I think if you have a fan and you can spray yourself… then fans can be helpful, ”Linden said.

"Fans are not infallible."

Lastly, be sure to monitor your neighbors, parents and friends, especially older people who may be living alone or in isolation, Linden said. 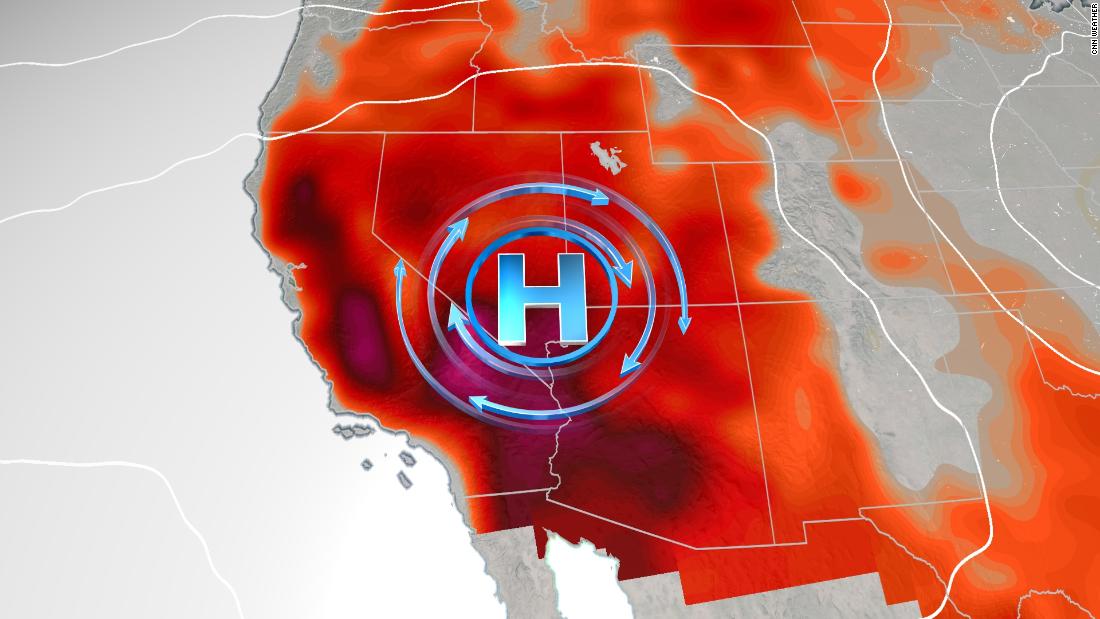 Death Valley in the US is now warmer There is a rumor that Ye Liu Shuyi will not compete for re-election as a legislative council member: "Waiting for the announcement of the New Democratic Party officials!"
2021-10-21T09:35:45.797Z