In the name of President al-Assad, the Syrian ambassador participates in the inauguration ceremony of the elected president of Peru

Lima-SANA On behalf of President Bashar al-Assad and the government of the Syrian Arab Republic, the Syrian ambassador to Caracas presented In the name of President Bashar al-Assad and the Government of the Syrian Arab Republic, the Syrian Ambassador to Caracas Khalil Bitar congratulated the elected Peruvian President Pedro Castillo during his inauguration ceremony.

During his participation in the official reception hosted by the Presidency of the Republic of Peru, Ambassador Bitar conveyed to the participating delegations the wishes of the Syrian leadership to President Castillo for success and for his country further progress and prosperity.

In turn, President Castillo thanked the government of the Syrian Arab Republic for accepting the invitation and participating in the ceremony and ceremonies of transferring the supreme authority in his country.

Castillo spoke in a short speech before the invitees, in which he focused on the importance of cooperation between countries and resolving disputes through dialogue and peaceful means, calling for stopping the arms race and replacing that with investment in education for the good and progress of peoples.

On the sidelines of the ceremony, Ambassador Bitar met with Nicaraguan Foreign Minister Denis Moncada, who expressed his respect and appreciation for the leadership and people of Syria. He also met with former Bolivian President Evo Morales and Director General of the Latin American and Caribbean Department at the Mexican Ministry of Foreign Affairs Martin Alonso Borrego, who expressed their appreciation for Syria's leadership and people.

It is noteworthy that President-elect Castillo, born in 1969, is a trade union teacher and politician who won the recent elections in Peru, which he ran as a candidate for the left-wing "Free Peru" party.

In the name of President al-Assad, the Syrian ambassador participates in the inauguration ceremony of the elected president of Peru Members of the Syrian community in Russia celebrate Dr. Bashar Al-Assad's victory in the presidential elections 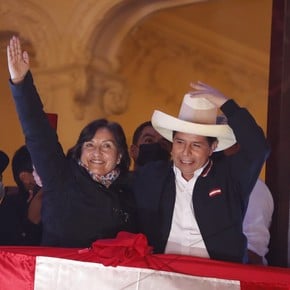