At the start of the holidays, Bavaria's motorways will be full. Because many long-distance trips are not possible due to Corona, the ADAC expects significantly more drivers than usual. At the start of the holidays, Bavaria's motorways will be full.

Because many long-distance trips are not possible due to Corona, the ADAC expects significantly more drivers than usual.

Munich - After a winter in lockdown, months in the home office and now also rainy weeks, Bavaria is pushing for vacation.

“The desire to travel is huge,” says Rudolf Vogler from ADAC.

"But so is the uncertainty." There is not much left of the relaxed Corona summer that was hoped for.

The delta variant * is driving the number of infections up again in many travel regions.

That is why many vacationers rely on destinations that can be reached by car, says Alexander Kreipl, traffic expert at ADAC Südbayern.

This should lead to significant traffic jams on the motorways in and around Bavaria, especially on the first weekend of the holiday.

The North Sea and Baltic Sea as well as the long-running favorites Italy, Austria and Croatia are particularly popular this year, according to the ADAC.

Then there are the tourists who want to vacation in the Free State themselves.

The last day of school is Thursday, and many will already be leaving, Kreipl predicts.

But it gets really full on Friday and Saturday, when the highest traffic volume of the entire season is expected.

Kreipl's advice: “If it somehow works, don't leave until Tuesday or Wednesday during the holidays.” By then the situation at the motorway bottlenecks should have calmed down a bit.

Traffic jams and construction sites in the south: At the start of the summer holidays, the ADAC warns of long waiting times on busy motorway routes in Bavaria.

If there is no other way and you have to arrive on Friday or Saturday: either start early in the morning or in the late afternoon, advises the ADAC.

Because even before the Bavarians even started their vacation, it became clear that the waiting times in the car can be quite long this year.

And even at the Vipiteno toll station on the Brenner motorway, waiting times of up to an hour have already occurred.

A good entertainment program is required, especially with children in the car.

To make matters worse, there are a number of construction sites.

For example on the A9 from Munich to Nuremberg between the Holledau triangle and the Baarer Weiher rest area.

And those who plan to drive south via Garmisch-Partenkirchen must expect disabilities: construction is underway on the A95 near Schäftlarn, as well as on the tunnel construction site for the B2 near Oberau.

When entering Austria, the following still applies: PCR test (maximum 72 hours old) or rapid test (48 hours) are mandatory - unless you have been vaccinated or have recovered. A simple vaccination is sufficient until August 15th in Austria, but it must have been at least 22 days ago. After that, the complete vaccination is also necessary in the neighboring country. Additional online registration is currently not necessary when traveling from Germany.

In the course of the travel forecast, the ADAC again drew attention to a problem that not only affects the motorways: the onlookers. The Munich-based Kerstin Weng reported how she herself became a victim of gawkers after a car accident in September 2019. "You feel like an animal in a zoo," she said. Stefan Pfeiffer, head of the motorway police in Feucht near Nuremberg, made headlines when he rang at a gawker after a fatal truck accident: "There he is, do you want to see him?" to leave in the pocket. "Everyone should be aware of the following: How would I feel if I were in such a situation in an accident car?" Mega traffic jam on the A8: the start of holidays in Bavaria triggers traffic chaos - Corona intensifies the effect 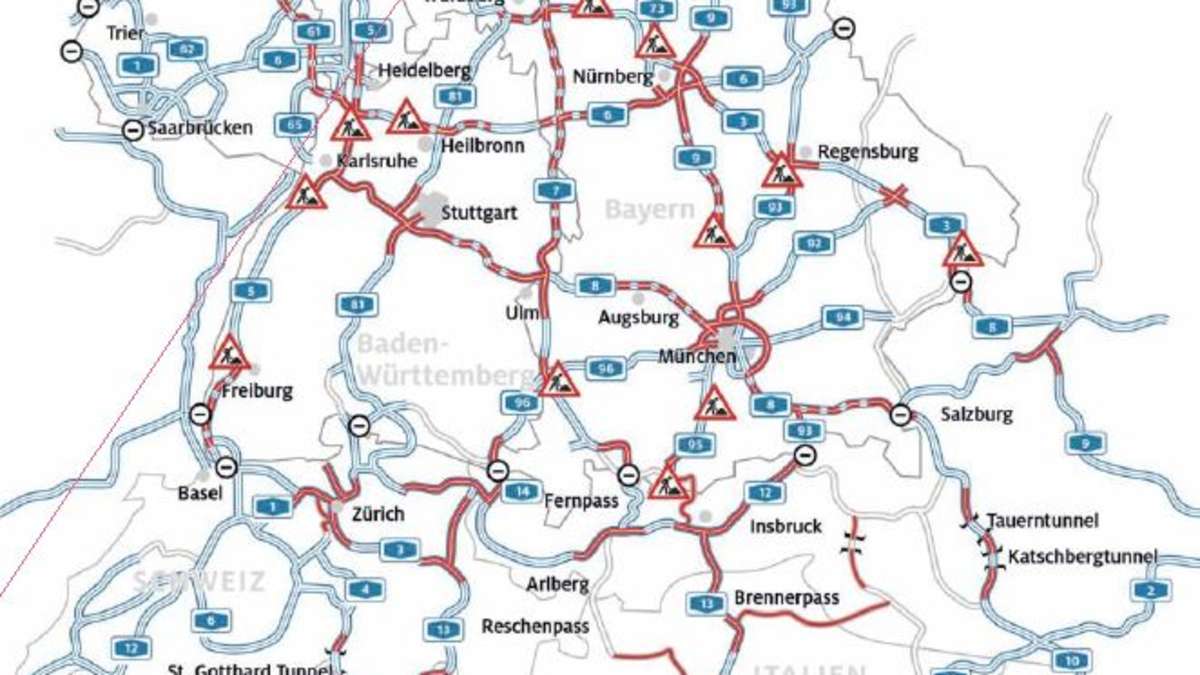