Why do female gymnasts at the olympic games compete with music in their floor routines, but men don't 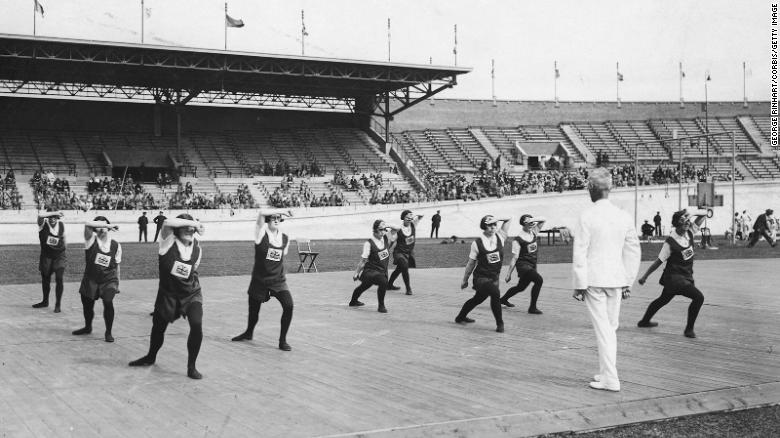 Why do athletes bite their Olympic medals?

When Olympic gymnasts compete in split floor exercises in Tokyo on Sunday and Monday, viewers will notice a key difference between the events.

The women will jump, skip and spin to the rhythm of the recorded music, while the male routines will be accompanied by silence.

The reason for the disparity dates back almost a century, when gymnasts first competed in the Olympics and the rules for their events were established.

Gymnastics experts say that expectations for female athletes were different then.

But despite the fact that today's gymnasts are more powerful and athletic than their counterparts in the mid-1900s - sometimes they even do things that men cannot do - elements of dance, choreographed to music, remain. being a mandatory component of your floor exercises.

In other words, women must perform their floor routines with music.

Some say it's time to end that rule.

Sibling couples who live the Olympics 1:34

Women's gymnastics was traditionally expected to highlight grace and femininity.

Male gymnasts first competed in the Olympic Games in 1896. Female gymnastics made its debut more than three decades later, in 1928.

The British women's gymnastics team during the 1928 Olympic Games in Amsterdam, the first year that gymnasts competed in the Games.

Back then, men's gymnastics routines were expected to highlight strength, while women's routines emphasized grace and femininity, said Georgia Cervin, former international gymnast and author of "Degrees of Difficulty: How Women's Gymnastics Rose to Prominence. and Fell from Grace ".

"When sport was developed for women, they adapted men's sport to make it 'appropriate' for women," Cervin said.

"Women were expected to make smooth, rhythmic, flowing and graceful movements that emphasized beauty and flexibility. That is why they perform to music and men do not. Men's floor routines were expected to emphasize strength in their place".

Gymnasts also began competing in the Olympics at a time when competitive sports were considered overwhelmingly male.

The Swiss men's gymnastics team at the 1928 Olympic Games in Amsterdam.

Between the 1910s and 1960s, vigorous exercise was considered bad for women and their reproductive health, said Jane Rogers, curator of the Smithsonian's National Museum of American History.

"Even doctors thought that strenuous exercise was bad for women, as women were supposed to become wives and mothers," she said.

"Sports can physically harm women and render them unable to perform their housework. Women competed, but were not offered the same opportunities as their male counterparts."

Women's floor routines are graded on artistic and athletic elements

The rules governing gymnastics state that women's routines must last 90 seconds, 20 seconds longer than men's, and they must include music throughout.

Over the years, music has evolved.

In the 1960s, the rule was that only one instrument could be used, so teams brought their own live pianist, Cervin said.

Then in the 1980s, cassette tapes were allowed, expanding the types of music that gymnasts could use in their floor routines.

However, one rule has not changed: music may not include recognizable words.

Yunseo Lee of South Korea competes in the women's artistic gymnastics qualifying floor event during the Tokyo 2020 Olympic Games at the Ariake Gymnastics Center in Tokyo on July 25, 2021 (Photo by LIONEL BONAVENTURE / AFP via Getty Images).

The judges award gymnasts points for their artistry, musicality and choreography, while the men are scored primarily for their acrobatic skills, giving them no incentive to add artistic elements to their routines, said Jason Woodnick, vice president of the Men's USA Gymnastics program

Because scoring is tied to choreography, women can have points deducted if they finish their routine before or after the music ends.

There have been attempts to get men to perform to music, such as the Soviet team at an invitational meeting in 1978, but it never really prospered, Cervin said.

"For men, music is not allowed in their floor routines," said Lindsey Ayotte, the head coach of women's gymnastics at the University of New Hampshire.

"It really isn't necessary as it doesn't have any dance component. Their routines are mostly based on cartwheels, strength and power. It's not an option for them to use music."

Mark Williams, head coach of men's gymnastics at the University of Oklahoma, said he thinks it makes sense for women to have music as part of their floor routines.

In 2021 some old expectations for gymnasts were challenged.

For example, the German women's gymnastics team rejected bikini-cut uniforms and opted for full-body versions at the Tokyo Olympics, in a statement against the "sexualization" of female athletes.

There's also a lot less dance and art now in elite women's gymnastics and a lot more power and strength, said Ayotte of the University of New Hampshire.

"There are still more dances, jumps and jumps in women's gymnastics that you don't see with men, but many women are doing the bare minimum in dance and doing more high-level cartwheels," she said.

Hyperactive gymnasts like Simone Biles from Team USA are pushing boundaries and bridging gaps with their male counterparts.

Biles has four abilities, or signature moves, named after him, including a backward jump with three twists and two folds, a dazzling twist that has to be seen to be believed.

Biles does things even men can't do, said Williams, a coach at the University of Oklahoma.

Simone Biles of the USA competes in the women's artistic gymnastics qualification floor event during the Tokyo 2020 Olympic Games at the Ariake Gymnastics Center in Tokyo on July 25, 2021 (Photo by MARTIN BUREAU / AFP via from Getty Images).

"Simone continues a journey for female gymnasts that really began in the late 1960s and early 1970s, when they started doing more cartwheels to accompany their dance, and that cartwheel rivaled men's in terms of difficulty. "Cervin said.

"Simone goes the extra mile ... and she's doing it at the same time that she has to expend her energy dancing, jumping, spinning, and smiling throughout her routine."

Cervin said she would like to see "gender expectations" removed in gymnastics to make the sport more inclusive and progressive.

That way, men can include music in their routines if they wish, and women can choose to act quietly.

Until that happens, gymnasts will continue to jump and work their way through the record books.

And they will do it to the rhythm of the music. 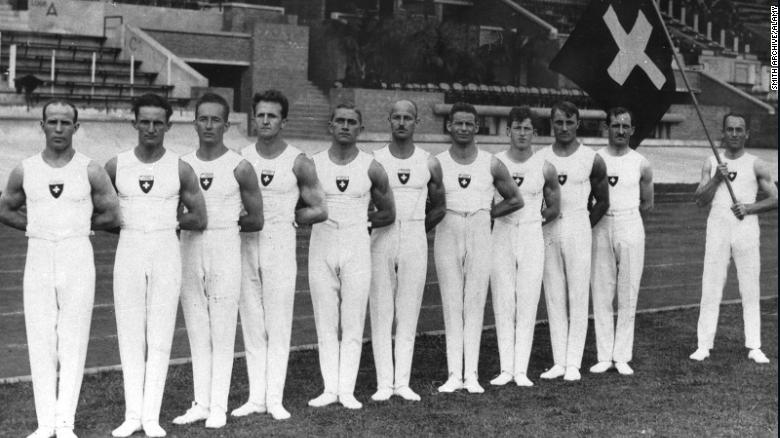 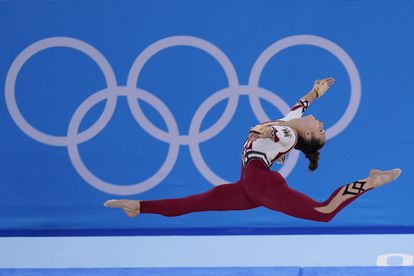 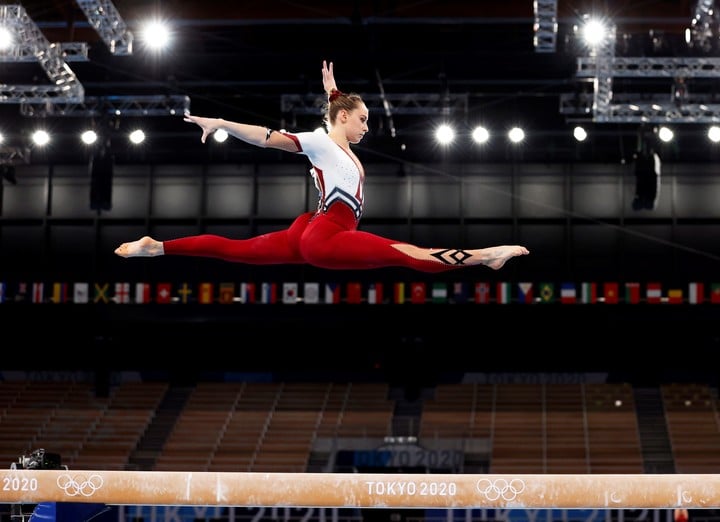 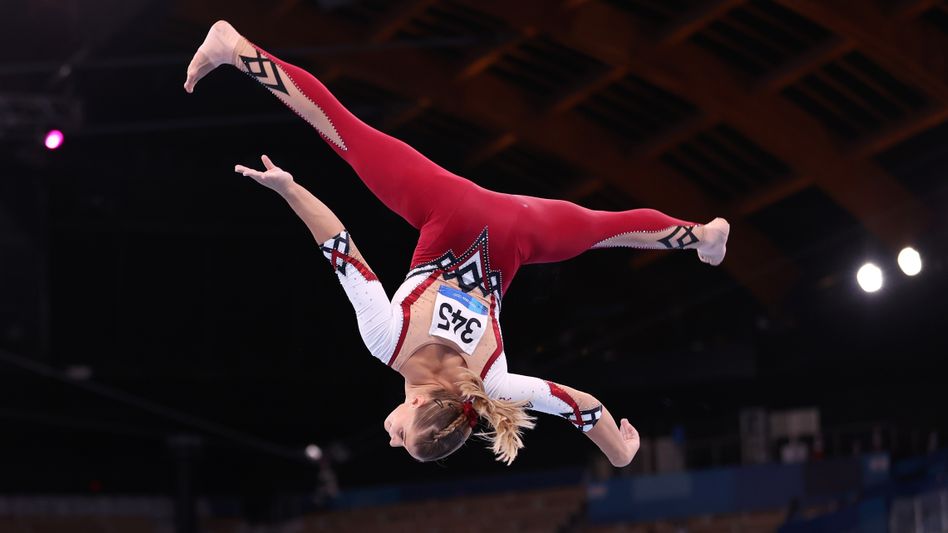 German gymnasts in full body suits at the Olympics: the message that will survive the competition 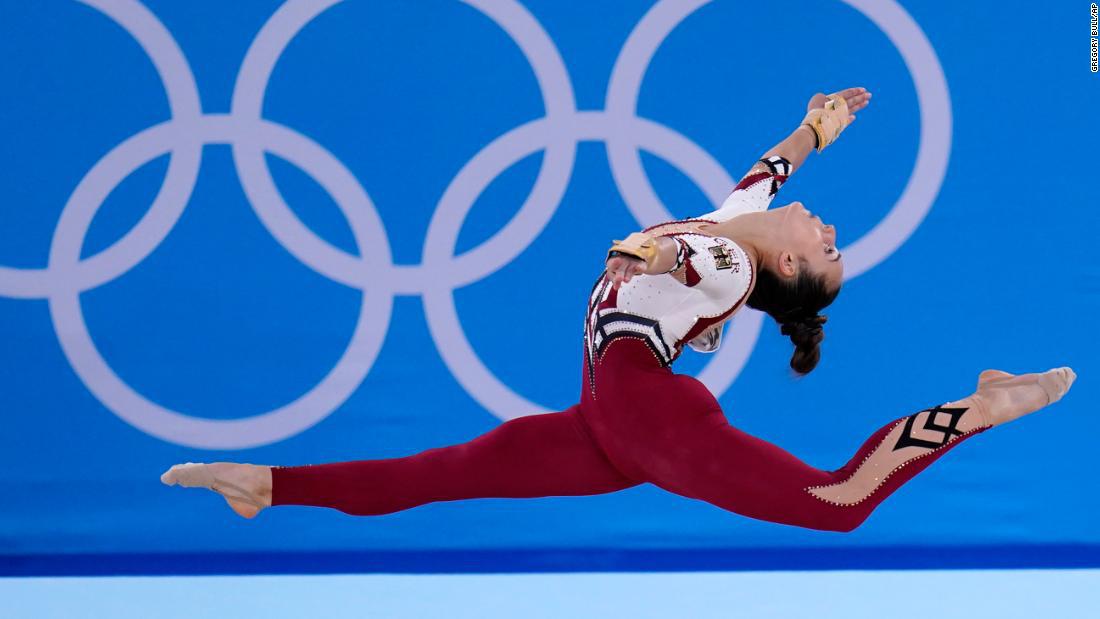