As of today, vacationers have to be vaccinated, recovered or tested on their return to Germany - even if they arrive by car or train. Just in time for the end of the holidays. And not always with consequences. 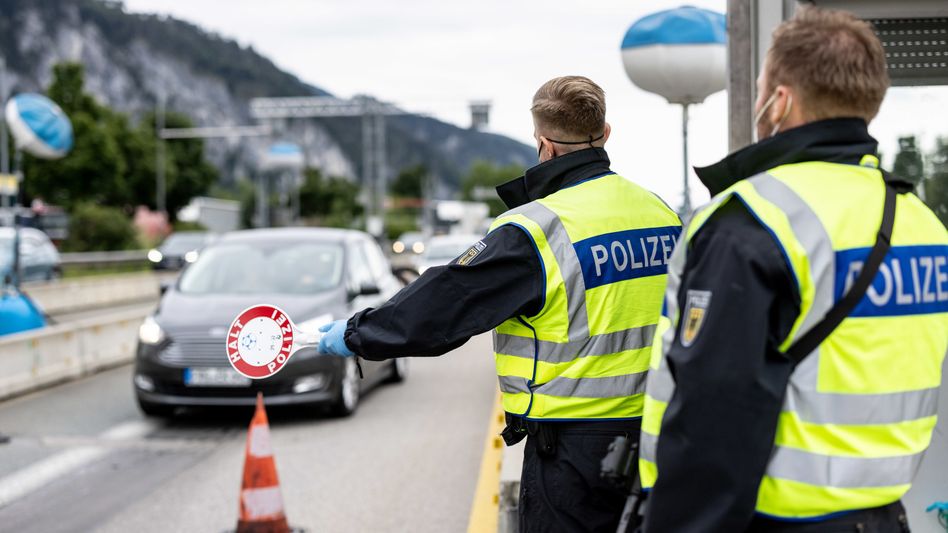 Control at the border in Bavaria

On Sunday, when only those who have been vaccinated and tested are allowed to enter Germany, a woman sits in the first class of the train from Krakow to Berlin without a mask, unvaccinated and untested.

The conductor who carries out the checks on behalf of the federal government says he thinks it's stupid too.

But if she hasn't been vaccinated, she'll have to take a test as soon as she arrives in Berlin.

It is not controlled.

This is what a colleague who was on the train says.

What if the woman doesn't test herself in Berlin?

What if she is infected with the coronavirus and infected numerous other people on the train?

Then exactly what experts have been warning about for weeks will likely happen: more corona infections.

It is nothing new that things in German pandemic policy are more likely to happen too late than too early.

And so it seems almost logical that the federal government only introduces compulsory testing for travelers returning when the summer holidays are over in most federal states, that controls are only carried out on a random basis and - as the example shows - often without consequences if violated.

Not only the Greens health expert Janosch Dahmen is angry about the delays.

Bavaria's Prime Minister Markus Söder (CSU) also worried in the summer interview on Sunday that it had taken far too long again for the new entry regulations to come into effect: "That annoys me."

Federal Minister of Health Jens Spahn (CDU) wanted to be faster this time.

His ministry was pushing for mandatory tests for unvaccinated people more than two weeks ago.

Then, as always, the matter got lost in the negotiations.

It has been clear since the beginning of the pandemic: Mobility in particular is responsible for many infections.

And so the seven-day incidence has been reliably increasing again in Germany for several weeks.

According to the Robert Koch Institute (RKI), most people within Germany are still infected.

However, according to an RKI report, the infections of those returning from vacation are playing an increasing role.

So now the controls at the borders have started.

Random checks are carried out to determine whether Germans returning from vacation have been vaccinated, recovered or have been tested.

However, they are also allowed to enter the country without proof.

You should then be tested and pay a fine.

Will the health minister's hope to convince the vaccinators of a prick will be fulfilled?

Quick tests chargeable from the end of September?

For the next Prime Minister's Conference on August 10, the Federal Ministry of Health is planning at least to put more pressure on unvaccinated people.

The federal and state governments could then decide to make rapid tests chargeable in the future.

More and more politicians have expressed themselves accordingly.

The rule should apply as soon as everyone has had the chance to be completely vaccinated - around the end of September or beginning of October.

The point in time at which the fourth wave can hardly be stopped, even by vaccination, from the point of view of experts.

The federal and state governments are therefore vigorously trying to convince people to vaccinate.

If calls for solidarity, for promises to protect yourself and others, don't work out, then with sausages and vouchers.

At the weekly conference of health ministers on Monday, the federal and state governments also want to decide on vaccination campaigns for young people - bypassing the Standing Vaccination Commission, which so far only recommends vaccinations for 12 to 17-year-olds if they have pre-existing conditions.

All of that is good.

If only vaccinated people could go to restaurants, concerts or gyms.

Or if at least instead of a rapid test, which can sometimes be false negative, a PCR test were required for such a visit.

What do the federal and state governments actually want to prevent?

At the moment, it doesn't look like such a rule will come soon.

At the same time, doubts are growing as to whether it is still clear to the federal and state governments what they actually want to prevent: high incidences?

Overload of the intensive care beds?

In North Rhine-Westphalia, Prime Minister Armin Laschet (CDU) is simply suspending the next step in the corona plan despite the increasing number of infections, so that the restaurants can stay open a little longer.

He shows very clearly what the pandemic policy would look like under his chancellorship if the voters decide in favor of him in September.

In Berlin, Health Minister Spahn wants to look increasingly at values ​​other than incidence, such as hospital admissions.

It seems completely forgotten that the argument against high incidences was never just the endangerment of the intensive care units - but also that the health authorities can no longer trace infections above certain values.

The virus then spreads uncontrollably, as has just been shown in Great Britain.

And: the more people become infected, the greater the likelihood of mutations in the virus.

Those against which the vaccination protection may not work either.

In addition, there is the uncertain factor long covid, which has not yet been adequately investigated.

When will this knowledge lead the federal and state governments to act?

Probably when it's too late. Corona tests abroad: This is how much they cost in countries like Italy, Greece, Spain and Denmark