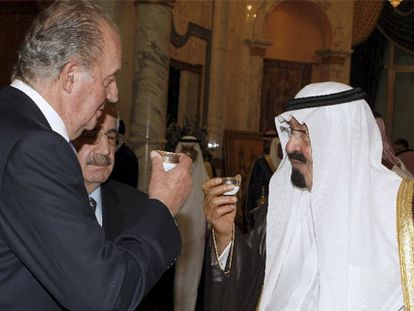 King Juan Carlos and Saudi King Abdullah Bin Abdulaziz have a cup of tea at the royal palace in Jeddah, Saudi Arabia in 2008.

Yves Bertossa, the Swiss prosecutor investigating whether Saudi Arabia paid a commission to Juan Carlos I for the works of the AVE to Mecca, does not give up in his efforts to prove the alleged illicit origin of the 65 million that the king emeritus received.

And for several weeks he has had new data to, at least, keep some investigations that are now three years old still alive without shedding too much light.

At the request of the chief prosecutor of Geneva, the prestigious Swiss Institute of Comparative Law in Lausanne has issued a report in which it questions the donation of 65 million that the King of Saudi Arabia Abdalá bin Abdelaziz made in 2008 to the then head of the Spanish state.

In the opinion of this body, a donation of these characteristics made by a public official would have violated the legislation of that country and damaged its public coffers, according to sources familiar with the investigation told EL PAÍS.

The report does not mention the Saudi monarch who died in 2015.

The Swiss Institute of Comparative Law is an autonomous body attached to the Swiss Federal Department of Justice and Police, attended by judges and prosecutors to learn about the legal framework in which transnational crimes operate. Prosecutor Bertossa seeks to determine whether King Abdullah bin Abdelaziz embezzled public funds. To accuse the managers of the account and Corinna Larsen, the examiner of Juan Carlos I who finally got the money, of money laundering, he needs to prove the illicit origin of those 65 million.

The defenses of those investigated, Arturo Fasana, manager of the account of the king emeritus;

and the Mirabaud & Cie bank have commissioned various experts in international law, one of them an Islamic Institute in Madrid, their own reports.

In all of them the opposite thesis is concluded: Saudi Arabia is an absolute monarchy and King Abdullah had the power to make this donation without committing an improper appropriation.

“The Lausanne report does not answer the specific question about King Abdullah.

It is rather generic ”, affirms the lawyer of one of these defenses.

The Geneva prosecutor has sent these reports to the Lausanne Institute for it to review and draw up a final opinion.

The figure of Juan Carlos I continues to be the central axis of the Swiss prosecutor's investigation. "I do not know for what reasons, with regard to the date of that contract, only 2012 is mentioned", responded to the prosecutor Bertossa the banker Nicolas Gonet, president of the bank in the Bahamas to which the 64.8 million donated by Juan Carlos I went. to Corinna Larsen. The question tries to decipher why the "irrevocable" donation contract, signed by the then head of state and the German consulting firm, is undated. No one has yet given an answer and it remains a mystery.

The chief prosecutor of the Canton of Geneva has not given up on asking a barrage of uncomfortable questions about the king emeritus, although he is not listed as being investigated nor has he been called to testify in the case that he opened three years ago in the Swiss style, secretly and without noise. Juan Carlos I's advisers fear Bertossa. Before settling in the United Arab Emirates, Juan Carlos I gave up traveling to Geneva to visit the Infanta Cristina because they warned him that the prosecutor would take advantage of it to call him to testify. "It is something that now seems unlikely, but has not yet ruled out," says a Swiss source.

In Spain, on the other hand, the criminal investigation proceedings opened in 2020 by the Supreme Court have a main figure: Juan Carlos I. The team of prosecutors led by Juan Ignacio Campos and Alejandro Luzón investigates the king emeritus for events very similar to those that The alleged collection of commissions for the works of the AVE to Mecca built by Spanish companies is being investigated in Switzerland. The indications point to money laundering, crimes against the Public Treasury, bribery and influence peddling. On July 1, Bertossa traveled to Madrid and met with his Spanish colleagues.

The Swiss prosecutor's interrogations of the circle of people who collaborated with Juan Carlos I in opening the account of the Lucum foundation in the Mirabaud & Cie bank, in which the money was deposited, collected more than 80 questions related to the then head of the State, according to the documentation to which this newspaper has had access.

A battery of questions addressed to the Swiss bankers who moved that fortune, to Fasana, Canonica and Larsen, the German consultancy that finally received the money in the glassy tax haven of Nassau (Bahamas). All of them, including the bank, are being investigated for an alleged crime of aggravated money laundering punishable by up to five years in prison. Last June was the last time they paraded before the tough Bertossa who has already suggested to his lawyers that he is willing to take the case to trial.

Through the prosecutor's office, in a modern building that rises five minutes by tram from the center of Geneva, Álvaro de Orleans, a distant cousin of the king emeritus, has also appeared as a witness.

And Antoine Boisser, former director of the Mirabaud & Cie bank, the man who got the millionaire account for his entity.

A secret account that was kept in a safe and that only the six partners of the bank knew.

In the history of this private bank that has offices in Spain, there has only been one other client whose name was kept hidden from the rest of the executives, according to what Yves Mirabaud, president of the entity, confessed to the prosecutor.

“Historically, there may have been another beneficiary that only associates knew about,” explained this banker.

In Geneva, the awkward questions are not over.

Unlike in Spain, there is no deadline to close a judicial investigation.

The case could last another four years, although the lawyers of those investigated have the power to go to a Court of Appeal and ask for it to be concluded.

Bertossa does not want to leave unanswered questions such as the undated 65 million donation contract and others that have not been clarified.

And almost all the interrogations revolve around the king emeritus. Why did Saudi Arabia transfer that money to him?

Did the Mirabaud bank check with the Saudis about the reason for the transfer?

Is there a document that proves the cause of this donation?

Before the prosecutor, all those questioned have given almost identical answers to these questions. It was a “pure gift” (pure gift) from the King of Saudi Arabia to his “brother” Juan Carlos I; the bank did not check the testimony given by the account managers; there is not a single document from the Saudi donors that explains the donation.

"What is the reason that led Juan Carlos I to disinherit his son for a sum of about 60 million to give them to his friend Corinna Larsen?" Bertossa asked Dante Canónica, the lawyer who managed Lucum. “Juan Carlos I could freely dispose of Lucum's assets while he was alive. She had made the decision not to keep that money and give it to her friend. I do not know if his son Felipe was informed of the existence of the foundation and its assets, ”the Geneva lawyer replied. Sources from the Palacio de la Zarzuela affirm that Felipe VI was unaware of it.

In his writings, Bertossa links the receipt of those 65 million with the award of the second phase of the AVE works to Mecca, which was obtained by a consortium of Spanish companies and with a 30% reduction in the final bid. But he has not obtained evidence to support it, according to judicial sources who assure that "he does not have any ace up his sleeve."

In Spain the investigation of the prosecutors on the works of the AVE to Mecca has run into the same problem. After months of investigations, interrogations of suspects and investigations inside and outside of Spain, the indications do not lead to evidence that proves the payment of a commission, so the alleged crimes of money laundering, bribery and influence peddling will be difficult to sustain if they are file a lawsuit against the king emeritus, a scenario that seems out of the question. "The investigation is full of holes," the prosecutor Juan Ignacio Campos has confessed to a person he trusts.

The chief prosecutor of the Canton of Geneva will direct his investigation in other directions, according to sources close to the case.

From the statements to some investigated, it is clear that they did not apply due diligence in checking the origin of the funds.

And it was that weak point that Bertossa exploited during the last interrogation last June of those investigated, especially the representatives of the Mirabaud & Cie bank.

He suggested out loud that he can expand his investigation to new crimes.

“Bertossa is not going to close the case without prosecuting someone.

If he cannot prove the laundering accusation, he will accuse the bank or one of those investigated of lack of diligence in verifying the origin of the funds ”, predicts a source close to the investigation.

Despite not being investigated in Switzerland, the future of the emeritus king also depends on the prosecutor Yves Bertossa, the man who in the summer of 2018 uncovered the box of thunder. While the investigation into the tapes that Villarejo recorded for Corinna Larsen in 2015 was archived at the National Court, Bertossa opened hers.

The prosecutor searched the office of the manager Rhone Gestión in Geneva, in a yellow-painted building on the banks of the Rhone River, where the manager Fasana and two of his sons jealously guard the names of their 400 Spanish and Swiss clients, to whom moves 1,000 million deposited in the Picket and Mirabaud banks. Bertossa also entered Canonica's office, an expert in creating companies, and the bank's headquarters, and questioned Álvaro de Orleans. He lifted up the rugs of the characters Corinna Larsen pointed to in her conversation with the ex-cop. And found the money trail. 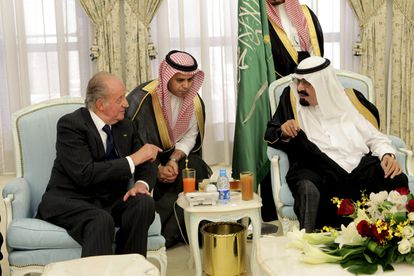 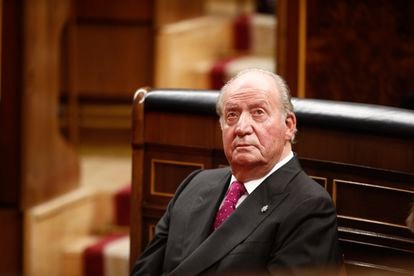 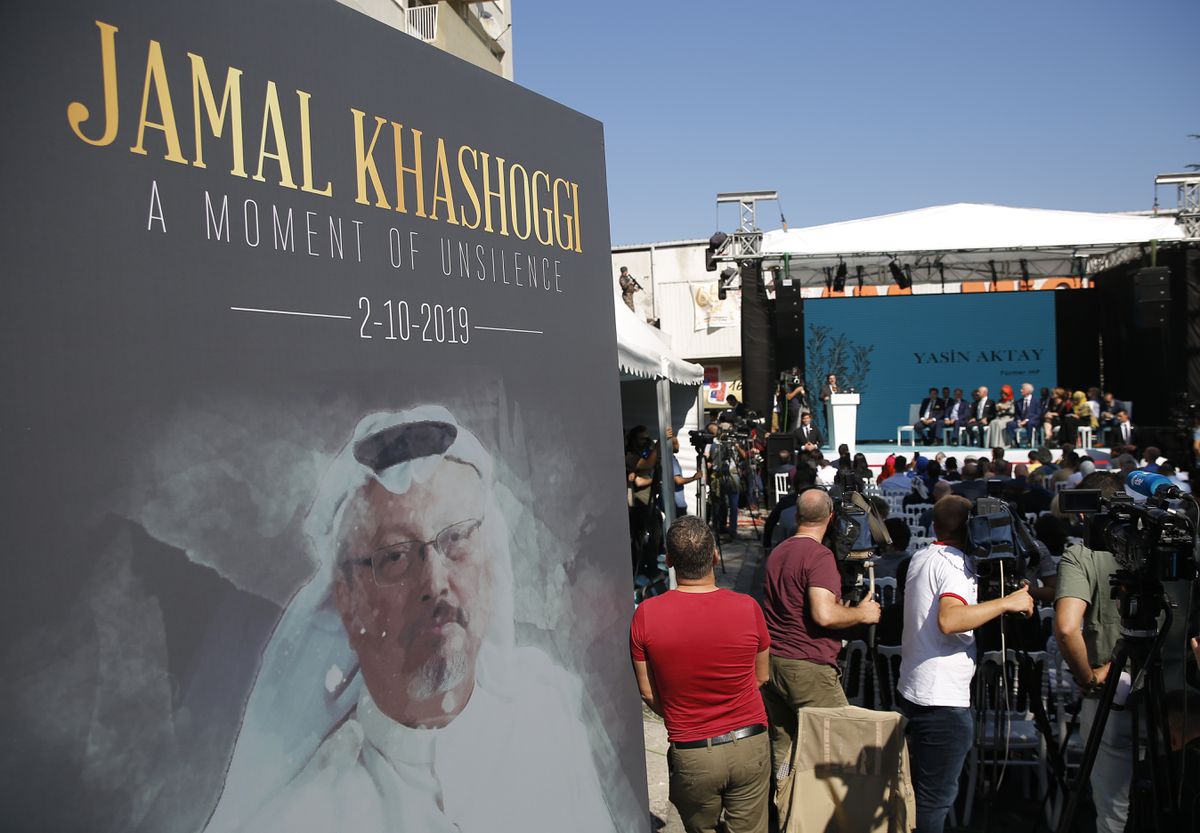 Saudi Arabia increases executions after hiatus from its G20 presidency, according to Amnesty International 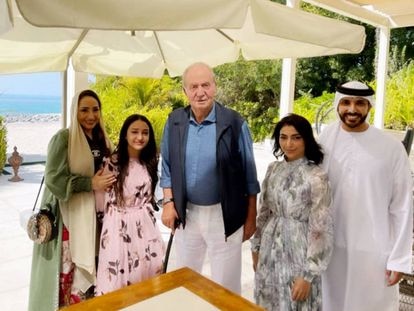 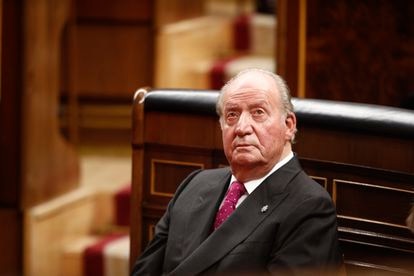 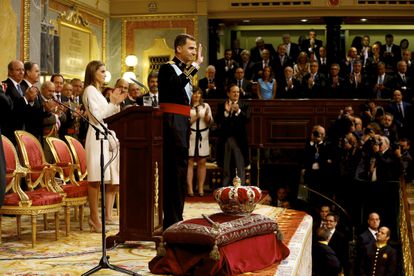