The eviction moratorium in the United States has just expired for millions of people who have been protected by this measure during the pandemic. What will happen now?&nbsp; 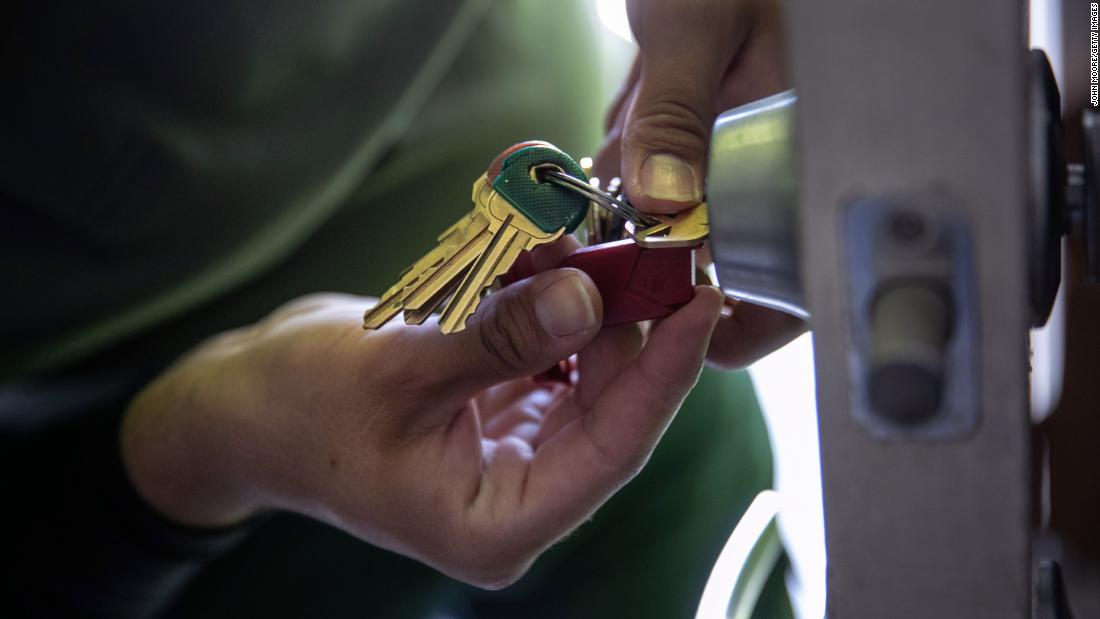 Deadline for US eviction moratorium has expired 3:35

It's as if the Democrats in the White House and Congress have forgotten the date.

Now it's the first of the month, and rent - and back rent - suddenly expires for millions of Americans who have been shielded from eviction during the pandemic.

Millions of households could face eviction over the next month - when lawmakers are on their annual August recess - and some have predicted a full-blown eviction crisis, as there is a surge in covid cases of the variant. highly contagious delta, prompting new calls for people to stay home and keep their distance.

"We only found out about this yesterday," House Speaker Nancy Pelosi told reporters Friday night after the House tried and failed to pass legislation that would extend the federal moratorium on evictions.

"There was not enough time to socialize him within our caucus, as well as to build a necessary consensus," he said, promising to return to the issue as soon as possible.

Probably after the break.

Pelosi was probably referring to the fact that the Biden administration only formally asked Congress to pass an extension on Thursday, two days before the program expired.

Some White House officials made a belated effort last week to reexamine the legal potential for President Joe Biden to extend the moratorium, but were told by attorneys for the administration that it was not possible, according to people familiar with the deliberations.

You would never know from the belated question from the White House or Pelosi's poor excuse that the Supreme Court was very clear a month ago: Either Congress would vote again to authorize the program or the evictions could go ahead.

Not that a successful House vote would have accomplished anything.

An eviction moratorium bill that cannot pass in the Democratic House would have been laughable in the evenly divided Senate, where the rules give any senator the right to delay anything.

There are many Republicans who opposed the temporary stay on evictions when it was first enacted during the Trump administration in September 2020. Today, there is a huge division over whether the government can or should tell private homeowners that they cannot evict tenants.

But this is a story of the failure of the Democrats to manage time as much as it is of the obstruction of the Republicans.

"We should have heard from the White House much earlier than we did ... However, there is still time to correct this mistake. I believe the White House and the CDC can act, they should act unilaterally. And if the courts us contest, that will still give these families time. "

And it's a clear sign that the government's extraordinary efforts to help Americans overcome the pandemic are temporary, even if the virus is here to stay.

The expanded unemployment benefits that the Democrats were able to maintain without the help of the Republicans will expire in September.

A new direct payment to parents, aimed at lifting children out of poverty, will end in 2022 unless they find a way to extend it.

What may be most frustrating for the Democrats who helped Biden enact his American Rescue Plan to fight covid this year is that they set aside money to help tenants, but most of it has yet to be spent.

'This is how people will have to live'

Democratic Rep. Cori Bush of Missouri slept on the steps of the US Capitol in protest Friday night, trying to raise awareness of the many Americans who could soon be left out of their homes.

"How are we on vacation when we have millions of people who could start being evicted tonight?" She said of her colleagues, dumbfounded, during an appearance on CNN on Saturday, wearing the T-shirt she had slept in.

"I'm dirty, sticky, sweaty. I'm still wearing what I was wearing last night. This is how people will have to live if we don't do something. 7 million, 6 million, 11 million, however many they are, they deserve human dignity and they deserve to be the people who represent them come out, do the work and make sure basic needs are met today, "said Bush, who had been evicted before coming to Congress.

The exact number of people the span could affect is not entirely clear, as some states and cities, such as California, New York and New Jersey, have enacted their own temporary eviction bans that last slightly longer.

More than 3.6 million renters were concerned about having to leave their homes due to the eviction in the next two months, according to a biweekly survey conducted by the US Census Bureau with data as of July 5.

Far more - 7.4 million Americans - reported being behind on their rent in the most recent survey, according to census data.

A review of Census data by the left-leaning Center for Budget and Policy Priorities explains that those who have trouble paying are more likely to be people of color and people with children.

The moratorium protects tenants from eviction for non-payment, but does not erase the rent owed.

The CDC declared the moratorium to help stop the spread of Covid-19.

It has been extended periodically and has now been extended for almost a year, but with the drop in covid cases this spring, the CDC promised that an extension until the end of July would be the last.

But now the delta variant is radiating from the south to the rest of the country and this tool to help people who cannot work and should not congregate in homeless shelters will disappear at exactly the same time that cities and states are watching. new restrictions.

Why didn't the White House extend the moratorium?

He couldn't, actually, due to a Supreme Court decision issued in late June.

At the time, with the clock ticking on this "final" extension of executive authority, the court sided with the tenants and rejected an emergency challenge to the moratorium filed by a group of homeowners, real estate companies, and real estate trade associations. .

Two conservative justices, Chief Justice John Roberts and Justice Brett Kavanaugh, sided with the court's liberals despite landlords arguing they were losing more than $ 13 billion in unpaid rent per month.

Kavanaugh said in a concurring opinion that he felt the CDC had overstepped its limits with the moratorium, but since this was the final extension of the authority and would only last until July, he let it continue to "allow more and more orderly distribution of funds from Congressional Assigned Rental Assistance ".

As CNN's Vogue's Ariane wrote at the time, Kavanaugh was very clear that if the government were to extend the moratorium after July 31, it would need "specific authorization from Congress."

That authorization did not arrive.

And now the evictions will continue.

Why was there an eviction moratorium?

The CDC launched it last September to help stop the spread of the coronavirus by keeping people in their homes.

But now that it expires, Emily Benfer, chair of the American Bar Association's Covid-19 Evictions Task Force Committee and a research partner at the Princeton University Evictions Laboratory, predicted that "widespread evictions" would start very soon during an appearance on CNN on Saturday.

Many of them could soon be in action.

She implored the landlords to seek help from the government instead of kicking out the tenants.

"The message to homeowners right now is, in truth, that public health is largely in their hands," Benfer said.

"Due to the eviction link and the spread of Covid-19, it is critical that they apply for rental assistance and wait to vacate due to long-term difficulties and also the immediate threat of increased Covid-19 this will create."

Congress allocated nearly $ 50 billion in assistance to both renters and landlords, but only a fraction of that has been spent as the states, the federal government, and the Treasury Department established a rental assistance program from scratch.

The pace has picked up recently, with more than $ 1.5 billion paid out in June.

But talking about red tape will sound like a foreign language to people now facing eviction.

"They don't know where their children are going to sleep on Monday night. They don't know how they will cover the back rent that they probably won't pay in their lifetime. Many of them have applied for rental assistance, but with only $ 3 billion from the US $ 46,000 million paid, they are on hold. And that is why they are in panic, they are desperate, they are in trouble. " 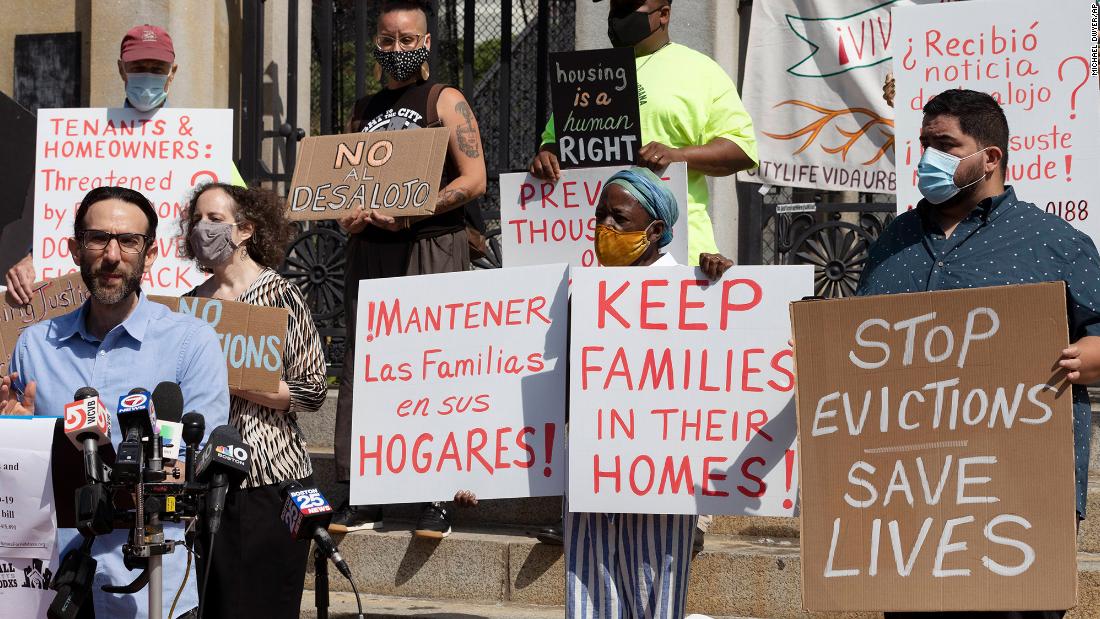 What's next for tenants now that the eviction ban has expired? 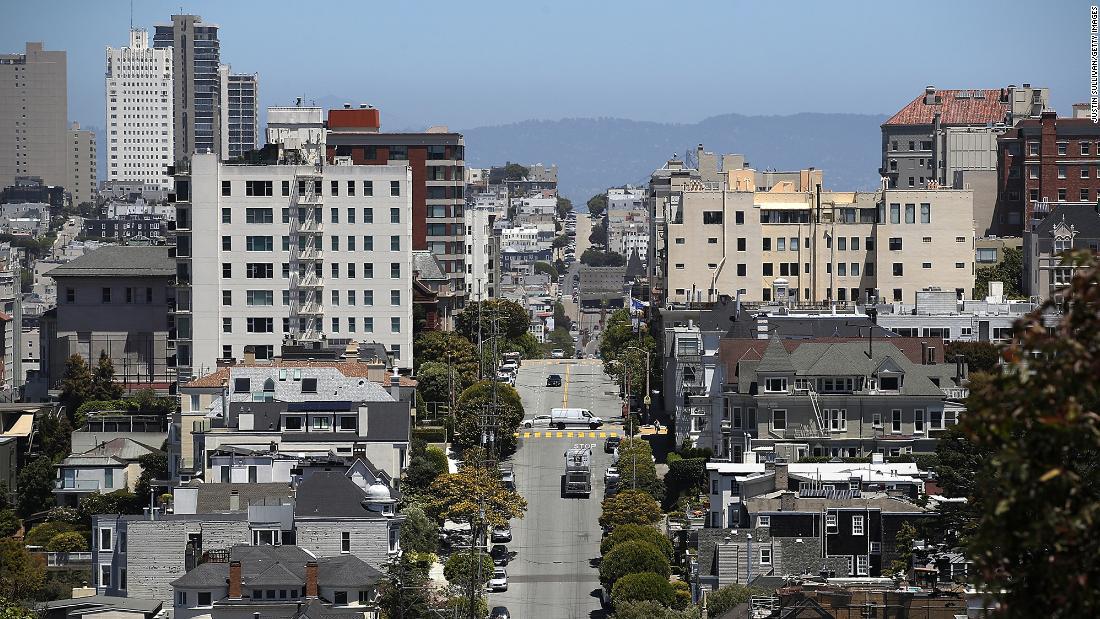 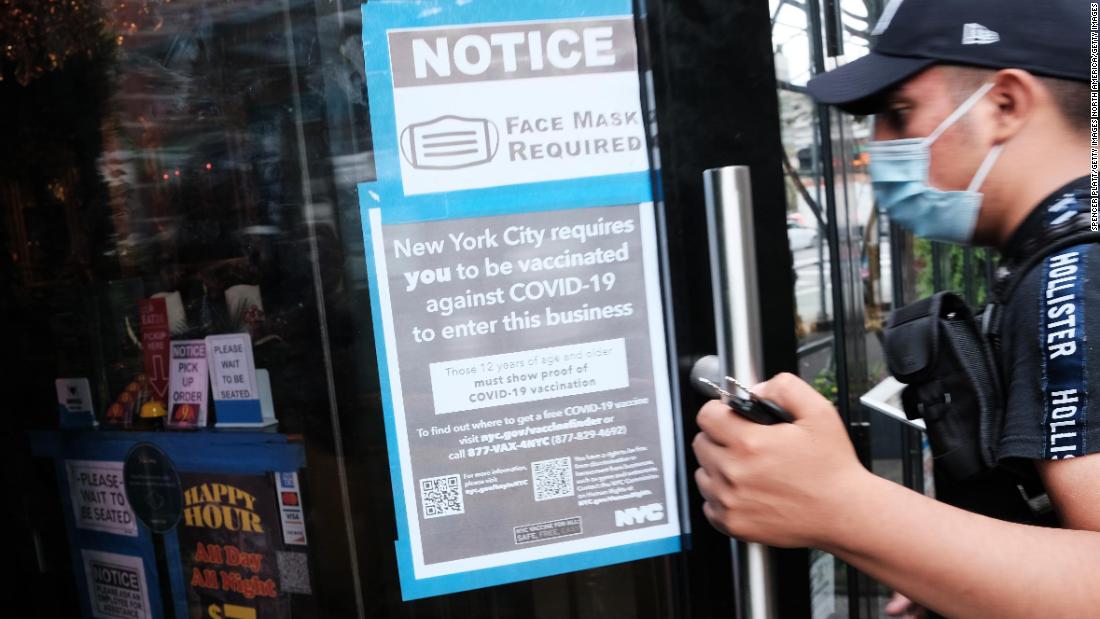 Let the unvaccinated pay for their deadly decisions (Opinion) 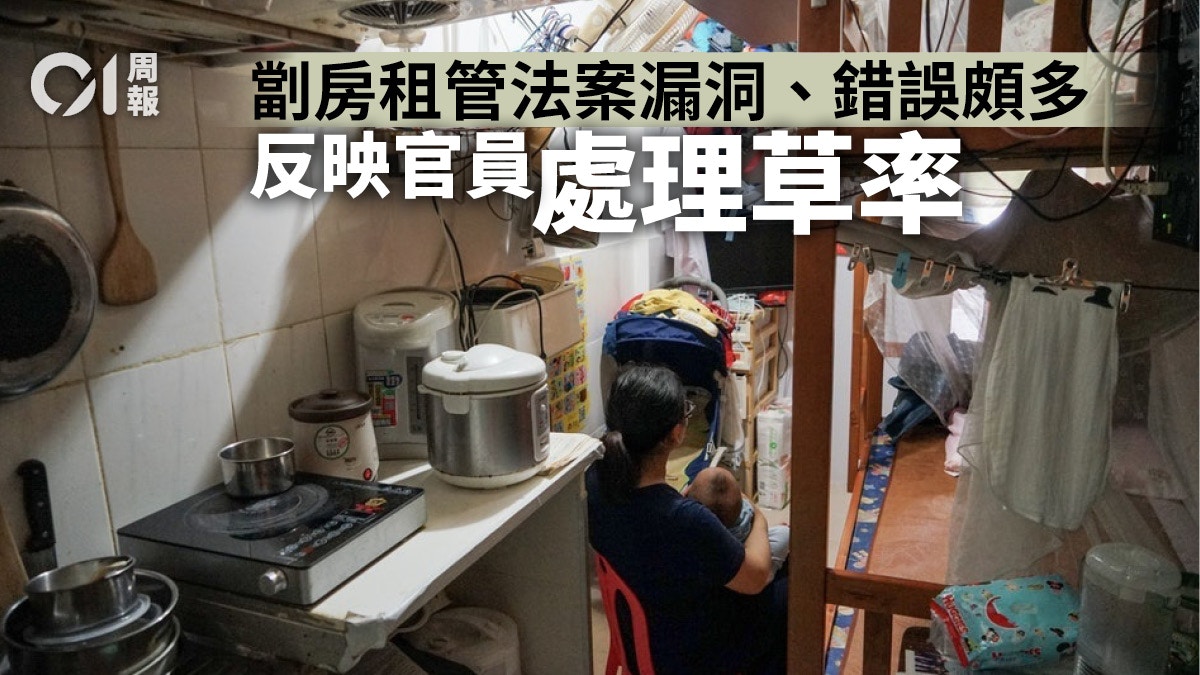 There are many errors and omissions in the rent control bill, not just one window period In the country of neoliberalism and free economy, millions of American tenants are threatened with eviction from their homes 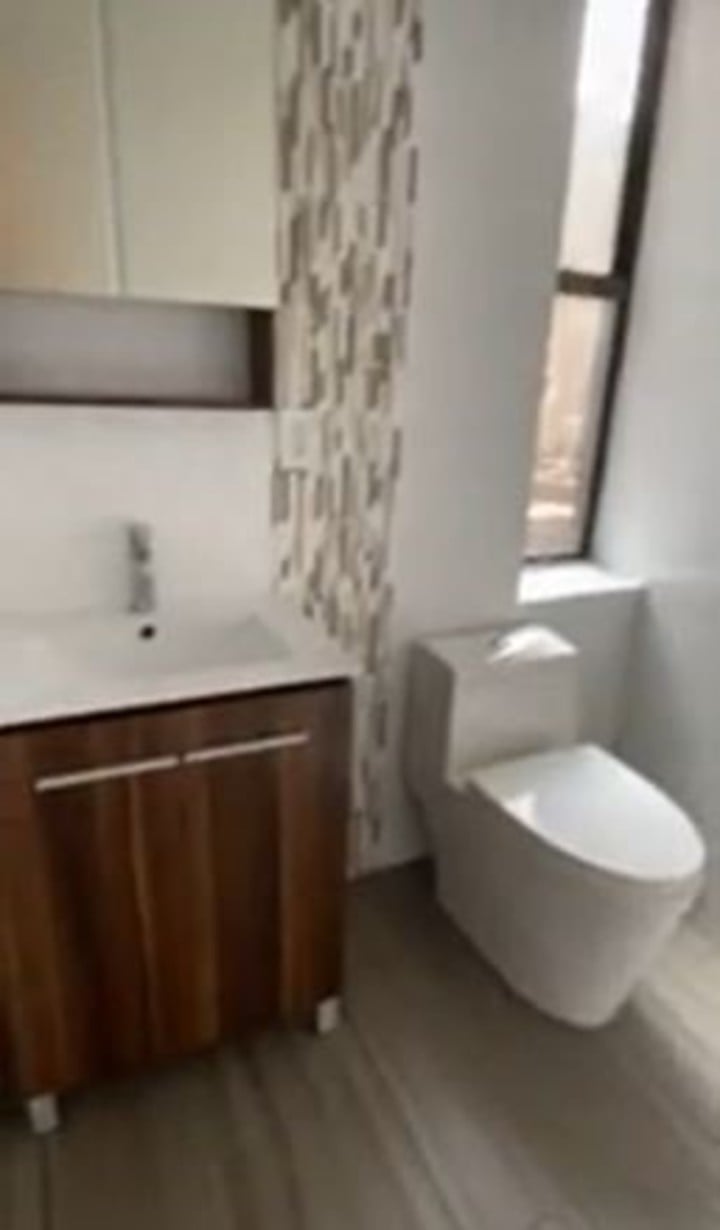