On Thursday evening, the Green Chancellor candidate Annalena Baerbock answered questions from the audience in “Clear text, Ms. Baerbock!”. The broadcast for reading.

The broadcast for reading.

At the end of the program, Bettina Schausten asked what would happen if Baerbock did not become Chancellor.

The Green Chancellor candidate replied that she came from the sport, she would like to continue fighting to create a new beginning with the Greens in the government.

This ends the broadcast, Peter Frey has announced a fact check that ZDF will publish on its website.

The last minutes of the broadcast are about the topic of retirement.

A pensioner reports on his case that he only receives a pension of 728 euros.

Baerbock replies that his pension needs to be topped up so that he can support his family.

Social policy in Germany has to change, says Baerbock.

A young man also wants to ask about retirement.

He says he has just finished his studies and does not trust the statutory pension.

Baerbock explains that, among other things, the low wages are also to blame, which is why the minimum wage should be increased.

An entrepreneur asks about CO2 emissions in industry.

This requires support from the federal government.

It needs faster funding notifications, Baerbock criticizes that it is currently taking too long.

She is convinced that the most climate-neutral products will be built in Germany in the future.

That will be of great value internationally.

"Clear text, Ms. Baerbock!": The Chancellor candidate of the Greens answers questions from the audience on ZDF.

Now it's about the topic of migration.

A young woman who is a member of the AfD asks about the evacuation flights from Kabul.

She wants to know: “How do you protect women in this country?” Baerbock replies: “Deportations to Afghanistan must be stopped.” The audience applauds.

As far as offenders are concerned, Baerbock emphasizes that Germany is a constitutional state.

A rapist would of course go to jail.

But deportations to Afghanistan are currently not justifiable even with a view to the Taliban regime.

A club operator from Frankfurt criticizes the 2G rule.

It would continue to divide society.

Baerbock says she sees it differently.

Otherwise Germany would run into a difficult autumn and winter.

"Slipping into a lockdown again is not possible."

topic is currently Corona and the effects on schools but also on health.

A Long Covid patient sits in the audience, asks about his serious illness and asks Baerbock for specific suggestions.

She calls for significantly more investments to be made in the research area.

“Everyone has to get vaccinated,” she adds.

"We have to get that well over 80 percent of the population are vaccinated."

Now it's about Baerbock's book and the plagiarism it contains.

“That was a big mistake,” she admits.

She announces that she will revise the book.

“Klartext” on ZDF: Baerbock faces the audience on TV - the first question is tough

A man asks about the fuel price and its planned increase.

Baerbock replies: "I grew up in the country myself, I know that you need a car there."

“I would like to take the public to work,” says the questioner.

“I have 14 kilometers to work, that takes two hours.

And grandma, who goes shopping, will certainly not buy an electric car. "Baerbock:" Well, that depends on how long she wants to drive. "The man waves away:" Oh, please! "

It makes it clear that a switch to electric cars is necessary.

"Otherwise our children and grandchildren say: How could you let that happen?" The question is: "Do we do something about it or do we leave everything as before?"

A member of the Fridays for Future movement asks about reaching the 1.5 degree target and why the Greens cannot promise that with their program.

“We have to massively promote the expansion of renewable energies,” replies Baerbock.

You cannot guarantee that the goal will be achieved.

But you will give everything for it in the next federal government.

has been going on for a few minutes.

A farmer accuses Baerbock of the fact that the green farmers, like her, are quick to put a negative label on them.

She asks: “Do you know what a liter of milk we get?

31 cents. ”She would need more than 20 cows to earn enough money.

"I want to ensure that we establish a transatlantic alliance for climate neutrality," says Annalena Baerbock when asked by the audience about the efforts of the Greens should they lead a government.

The questioner criticized that there was no consensus within Europe on climate issues.

The first question is

Bettina Schausten asks whether Annalena Baerbock would still play for victory in the poor poll ratings.

Baerbock emphasizes that she will continue to stand for winning the federal election with the Greens.

Let's go, Peter Frey and Bettina Schausten greet Annalena Baerbock and the 70 spectators in the audience.

“Clear text, Ms. Baerbock!” Begins in ten minutes. We accompany the ZDF election forum in the ticker for you.

election forum “Klartext, Frau Baerbock!” This evening at 8:15 p.m. to help turn the currently rather mixed survey results into a trend reversal.

Germany trend, which was published this afternoon at 6 p.m., the Greens are only 15 percent.

A few months ago, some polls saw Baerbock's party at 26 percent.

Berlin - Only a good week until the federal election *: The last few days could be a tremendous game for Armin Laschet *, Olaf Scholz * and Annalena Baerbock *. Although the SPD is the favorite in Fate Week for the first time in almost 20 years, the party is concerned about the impact the searches in the Ministry of Finance could have on its candidate for Chancellor Scholz. The Union of CDU * and CSU *, which is behind in surveys, is hoping for a change in mood for the final. And the Greens * and their candidate Baerbock still believe in a late turnaround.

The signs of voter favor, which reversed within a short period of time, held in the penultimate week of the election campaign: The SPD * is no longer rising in the polls, but the Union only has a few days left to catch up.

The personal popularity ratings have improved only minimally for Union Chancellor candidate Armin Laschet, while SPD Vice Chancellor Scholz is still by far ahead.

And the third in the league? Annalena Baerbock does not seem to be able to catch up with her arrears and to write off her claim to the Chancellery *. At least that's what it looks like at the moment. But Baerbock wants to continue fighting for every vote. In the evening she is a

on the program “Klartext, Frau Baerbock!”, The

election forum. There, the Green candidate will answer questions from the audience.

Olaf Scholz and Armin Laschet were already guests in the format and had to comment on topics such as Afghanistan, possible coalition alliances and misconduct in the election campaign.

So now it is Baerbock's turn as the last of the three candidates for chancellor. 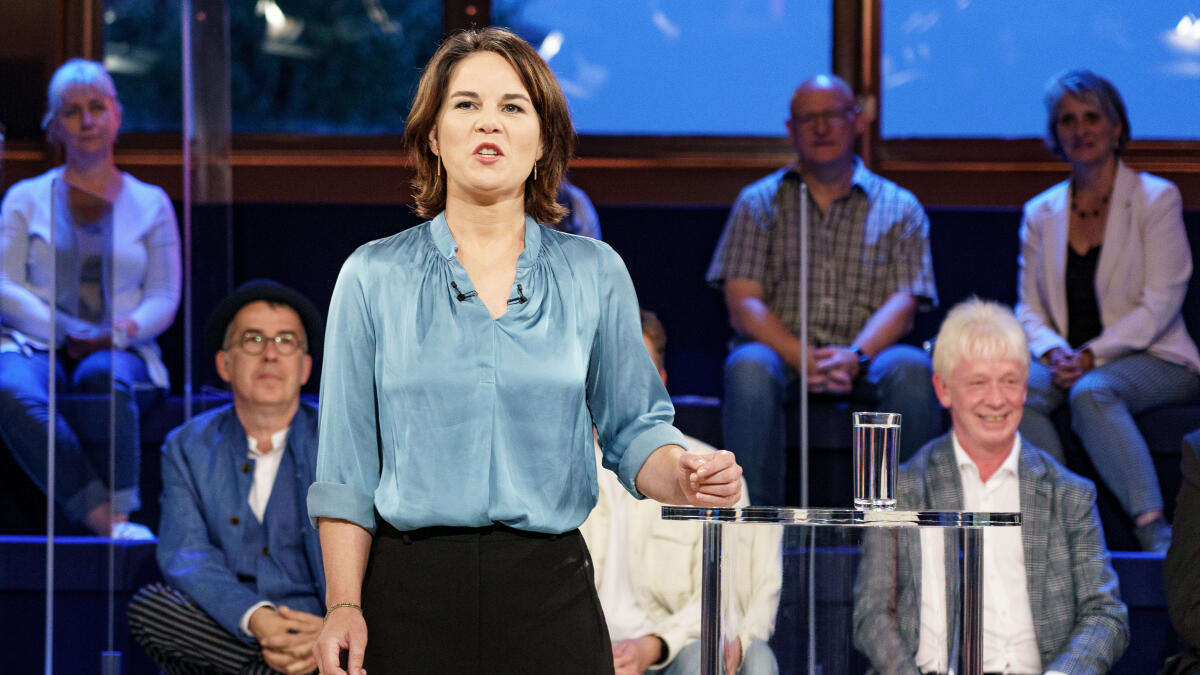 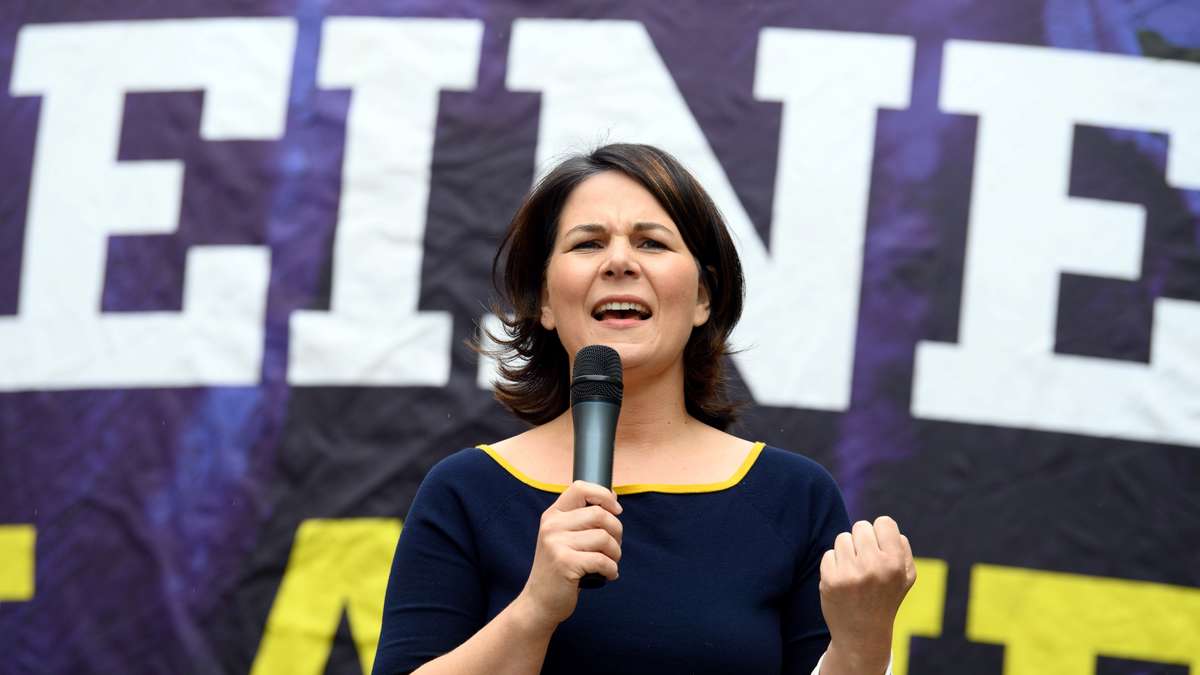 After a flood disaster, Baerbock has a clear demand and shoots head-on at Söder