How did the people in Erding vote in 2017, like in Kassel and in Norddeich? Our interactive map of the federal election shows the results from all 11,000 cities and municipalities. 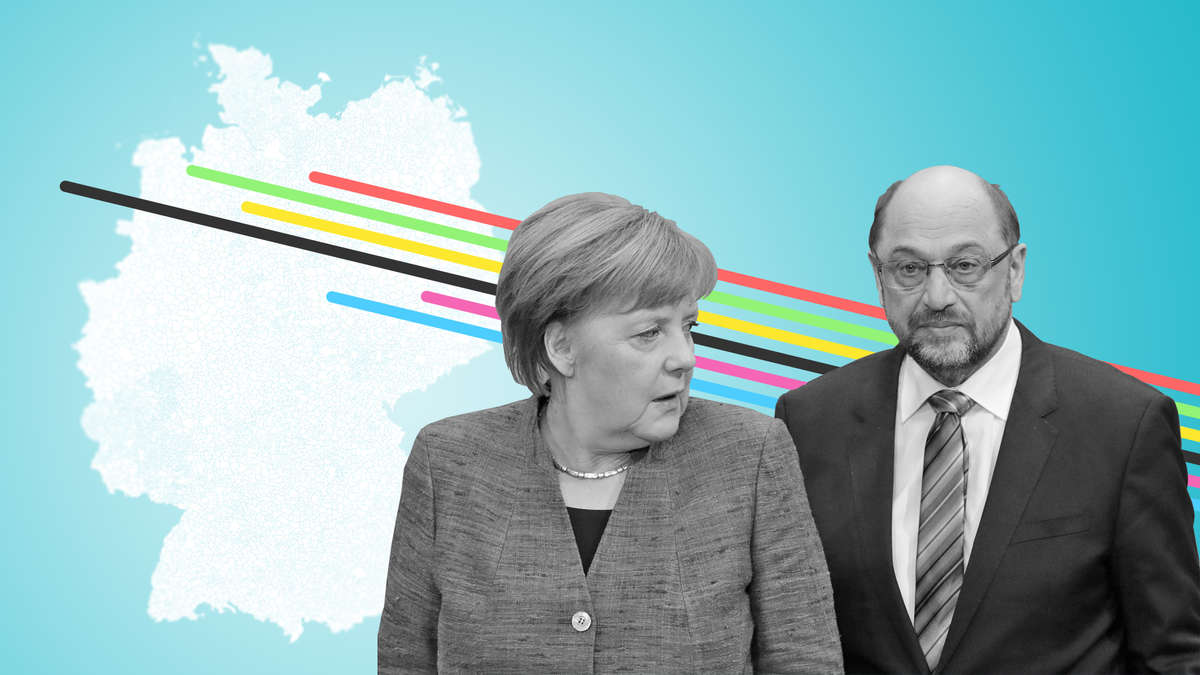 How did the people in Erding vote in 2017, like in Kassel and in Norddeich?

Our interactive map of the federal election shows the results from all 11,000 cities and municipalities.

Many of the last Bundestag election * in 2017 remember how Angela Merkel became Chancellor again.

And how their opponent Martin Schulz (SPD) clearly missed the move into the Chancellery in the end.

But what was the political mood like in Germany?

What drove the people at the lowest federal level of the municipalities?

This is shown by our new

for municipalities and constituencies, in which you can find all the first and time voting results from the previous 2017 federal election.

There is no consolidated official data source for the historical election results from 2017.

That is why we

converted and processed 22,000 raw data for you

in a data journalistic project

The result is the interactive map in this article, where you can find all the results for parishes and constituencies from north to south.

You can find more information about how we work in the background box "Transparency" at the end of the article.

The map gives a detailed insight into the political situation during the last federal election.

At the same time, we will gradually prepare a comparable interactive voting card for the 2021 elections at the end of September.

Interactive map: All the results of the 2017 federal election

interactive journey through their home community

and other German regions.

From the election Sunday of September 26th, all eyes will then be on where there are political shifts in German cities and municipalities.

Will the Germany map remain CDU / CSU black as it did in 2017, what role does the AfD play, where are new or different colors created by the strongest party or the strongest candidate?

In addition, on election evening of the 2021 federal election you will continuously find new community and city results in another interactive map, which we also put in relation to the previous federal election.

Election results of the federal election 2021

We will gradually map the election on September 26, 2021 for the 11,000 German municipalities and 299 constituencies.

We offer an interactive map in which you can find the counted votes.

With our large data journalism project, our vision is to integrate as many community results as possible via a variety of data sources with an extremely large amount of effort from election Sunday and the following days.

Transparency: Our data, sources and methods

There is no official or uniform source in Germany for nationwide election results at city and municipality level.

We have therefore laboriously calculated the 2017 results for all German cities and municipalities on the basis of several official sources.

The basis was the results of the Federal Returning Officer at the electoral district level - i.e. the individual polling stations.

With the help of data sets on municipal area reforms from the Federal Institute for Building, Urban and Spatial Research and the Federal Statistical Office, we have summarized 11,001 results at the municipal level from 88,514 electoral district results.

With this method, we have also taken into account changes such as municipalities that have merged or dissolved since 2017. Federal election 2021: results in the constituency of North Friesland - Dithmarschen Nord in the overview map Federal parliamentary elections 2021 in Bayreuth and Upper Franconia: There are also referendums in two municipalities