The debate on affordable housing in the capital moves to the national election campaign. The referendum on the expropriation of large landowners coincides with the elections

Mutual funds are raving about plots like this in the former municipality of Tegel, north of Berlin.

Well connected, with a subway and suburban stations, a minute's walk from a lake and green areas, this old industrial complex for water purification from the late nineteenth century is now a candy for real estate companies looking for central land in which to build. .

The current owner wanted to tear down the old brick buildings, build luxury homes in their place and excavate an underground car park.

But he met with Heinz-Jürgen Korte and Regina Schönfeld, a couple who took the case to court so that the place where they live and work - they have a motorcycle workshop in one of the old ships - does not end up being another impersonal complex of exclusive apartments.

The project is stopped and the neighbors have come together to try to buy the plot themselves and develop it with a social focus. "The housing situation in Berlin is dramatic," says Korte over a cup of tea in his workshop: "We do not refuse to build here, the city needs more flats, but we want them to be houses that normal people can afford" . In the residential building on the plot, several apartments have been empty since 2016 while the future of the old treatment plant is being resolved. The couple has been in a provisional one for three years. Yours was infested with mold due to lack of maintenance and has not been conditioned yet. It is a very common complaint in Berlin, where more than 85% of the population live in rent: the owners, usually large companies, many foreigners,they stop investing in real estate and simply reap the benefits.

A poster asks to vote 'yes' in the referendum held this Sunday in Berlin on the expropriation of large homeowners. Omer Messinger / Omer Messinger

The movement that denounces the escalation of prices in the big German cities has sneaked into the electoral campaign with force. The parties are launching proposals to encourage construction or to freeze rent increases in the developed country where more people live for rent - only Switzerland has a higher percentage of tenants. This Sunday, coinciding with the general elections, Berliners vote in a controversial referendum whether the city should expropriate the large landowners (from 3,000 homes). On that day regional elections are also held in the city-state, very focused on the problem of housing shortages, one of the most worrying Berliners. Die Linke, the post-communist party, has based its campaign on this slogan: "So that Berlin remains your home."

The problem is national, but Berliners are the most combative, perhaps because the city was once very affordable. Today the contrast with that "poor but sexy" Berlin that attracted young people from all over the world for its cheap rents is shocking. Although it is not the most expensive - it is surpassed by Munich and Cologne, among others - Berlin is the city where rents have risen the most in the last five years, according to a recent report by Deutsche Bank on the real estate market. Demand far exceeds supply. On average, for each apartment that remains free in the city there are more than 200 interested parties. Rents go up, but wages don't. The struggle of Berliners, who organize signature collections and demonstrations almost every weekend, has ended up becoming a national debate.

Jochen Möbert, an analyst at Deutsche Bank, explains that "in terms of housing, there are large imbalances within the country." While in economic centers and metropolitan regions, the target of internal migration, the supply is scarce, in rural areas it is estimated that there are two million empty homes. To the internal movements is added the arrival of workers from other countries, attracted by positions in the technology sector. The population is 82.3 million, "higher than estimated by official projections," recalls Möbert. To get the final cocktail, you just have to add the interest on the capital, which comes to invest in Germany in the heat of falling interest rates and rental yields of 4%. The result:Today the price of apartments is 90% higher than 2009 levels and rents have increased by around 50%. "It is estimated that the boom will continue for some time," says the economist.

The two main candidates for the Chancellery, the Social Democrat Olaf Scholz and the Christian Democrat Armin Laschet, have defended in the electoral debates that to get out of the housing crisis, more is needed to build. Experts such as Harald Simons, from the University of Leipzig, assure that this will be the workhorse in the coming years: more building land is needed and construction accelerated, a slow and expensive process in Germany. Construction in Berlin can't keep up with demand. Between 2015 and 2019, 63,000 flats were completed, explains Reiner Wild, president of the powerful Berlin Tenants Association. "But the vast majority are apartments for rent at high prices," he laments.

Berlin's failed attempt to freeze rents for five years and put a cap on prices - the Constitutional Court ruled last May that a region has no powers to do so - has moved the debate to a national level. If you can't a

It should be undertaken by the federal government, say activists such as the organization Deutsche Wohnen & Co Enteignen, which has led the collection of signatures to allow the Berlin referendum. The consultation is not binding, but it will add pressure to the parties that have to form a government after the elections. The polls of the regional elections in Berlin give an advantage to the Social Democrat Franziska Giffey, Family Minister of Angela Merkel's grand coalition government who resigned in May over a case of alleged plagiarism in her doctoral thesis. Within walking distance are Los Verdes and in third place the CDU.

The Conservatives' program proposes to build more than 1.5 million homes across the country by 2025 through tax breaks and reduced red tape. It's not talking about limiting uploads. The SPD also wants to promote the construction of 100,000 social housing units a year, but it is in favor of freezing rents so that they do not increase above the CPI. This could be a point of friction with the liberals of the FDP, who are emerging as one of the partners of the next coalition that governs Germany: they are against the limits on the price of the rent - in addition, they bet on the purchase - and could consider it a red line in negotiations. The question of whether there will be a rent cap similar to the one Berlin tried is repeated as the elections approach.Experts don't see it as plausible unless a left-wing coalition led by Scholz is formed with Los Verdes and Die Linke, mathematically possible but unlikely.

Last minute agreements before the consultation

The fed up of the citizenship by the increase of the rents has forced that the Government of Berlin (a tripartite of SPD, Greens and Die Linke) and the two biggest landlords of the city move token a few days before the referendum that will ask the Berliners if the flats of the large landowners must be expropriated. The city-state will buy 14,750 apartments from Vonovia and Deutsche Wohnen, which are in full negotiations to merge and create a real estate giant with more than half a million homes in Germany. Berlin will pay 2.46 billion euros. With the purchase, the city recovers a small part of the public housing stock that it sold to private operators in the 1990s and early 2000s, plagued by debt. Deutsche Wohnen, with more than 100,000 flats in the capital,it is the main objective of the campaign in favor of expropriation. "In addition to contributing to the expansion of the municipal housing stock, both companies are committed to regulating rent increases and building 13,000 new apartments in Berlin," said the CEO of Vonovia. 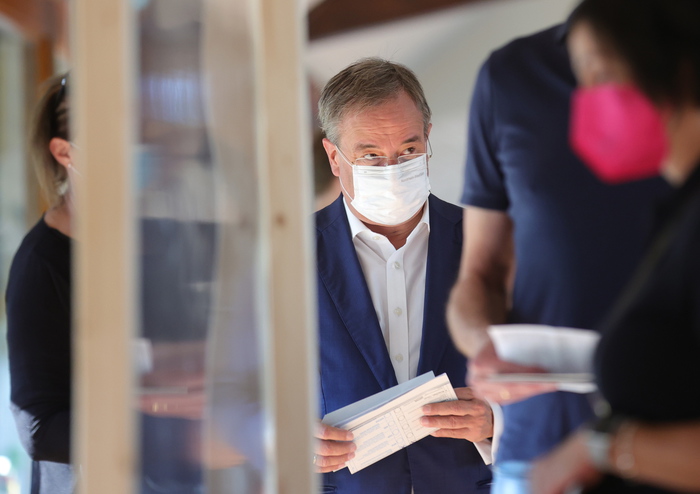 Laschet's gaffe, badly folded ballot with the vote on display Expropriation bang in Berlin! According to the extrapolation, referendum on rental madness has been successful Bundestag election: marathon and breakdowns cause chaos in Berlin

Federal election 2021: The important rules for the voting slip Chaos at the Berlin election: Journalist speaks of a "supergame" - breakdowns Reason for contesting the result?