The Union relies on unity in the last few meters of the election campaign - together with Laschet, Söder and Merkel in Munich. The Union relies on unity in the last few meters of the election campaign - together with Laschet, Söder and Merkel in Munich.

All three gave a speech, all three referred to the importance of this federal election - and warned of “red-red-green”.

Söder and Laschet in particular painted the Union's bogeyman on the wall and appealed to all those who were undecided to make their crosses with the CDU / CSU.

The rapprochement between Armin Laschet and Markus Söder is also noticeable. With whom he even wants to "govern together"

. The sister parties tried to work out the differences to the Greens and the SPD and to warn against a "left slide". However, it was clear to everyone involved: The federal election will be close, everything that is possible will be mobilized again in the last few meters.

Armin Laschet, Union candidate for chancellor, is received on stage with cheers. In his speech he underscores his connection to Munich, where he once studied. He thanks Chancellor Angela Merkel for her achievements. It is now up to them to carry on this legacy. Otherwise, everything that has been achieved in the past 16 years can be turned back.

The Union stands on the side of the middle class in Germany. Tax increases are not an adequate means - especially in view of the Corona crisis. He also goes into the possibility of red-red-green. He leads Juso boss Kevin Kühnert and pokes at Olaf Scholz. Kühnert brought a member's decision into play - if I were Olaf Scholz, I would be "very careful when it comes to member decisions".

In the direction of “Fridays for Future” and the current climate strike, Laschet says that the Union also stands for climate protection. But this cannot be achieved with a “planned economy”. He picks out Annalena Baerbock's quote "Bans are also drivers of innovation" and describes the statement as incorrect. Like Chancellor Angela Merkel, he is also addressing 88-year-old Charlotte Knobloch - and promises to fight the AfD in parliaments.

He also blows the attack against his fiercest competitor Olaf Scholz.

“To say I am Angela Merkel”, as Scholz says, according to Laschet, is “played” and not “authentic”.

With a view to Söder and a possible next coalition committee, Laschet says: “And this bundling - a North Rhine-Westphalian who is moving to Berlin and a Bavarian who is sitting at the coalition table.

That will be unbeatable, and I tell every coalition partner: Put warm clothes on!

Armin and Markus - it will be a great team and we will rule the Federal Republic together. "

Merkel and Laschet in Munich: Söder sees Union at an advantage over election and speaks of "immoral vibrations"

What runs through the CDU / CSU election campaign event: The warning of a “left slide” and “red-red-green”.

CDU General Secretary Paul Ziemiak railed against the SPD and the Greens in his role as a moderator.

They have long since lost their connection to the people and stand for “Berlin-Mitte” alone.

"Yes, it is very close, yes, it is closer than ever, but dear friends, we will still shoot the game on Sunday." The Union will be number one in Germany.

That is the declared goal.

A “red-green experiment” would damage the Federal Republic.

They stand with full conviction behind Armin Laschet as candidate for chancellor.

The head of the CSU sees the Union as having an advantage over the SPD just before the crucial election weekend. Since the CSU party congress, he has felt a jolt in Germany, said the Bavarian Prime Minister on Friday at the Union's election campaign in Munich. The SPD and the Greens were getting nervous and would accuse the Union of an unfair election campaign. “At the end of the election campaign, the arguments become thicker,” said Söder.

The Union does not want to paralyze Germany with new taxes after the pandemic, but rather give it space to develop. "We want to stimulate this country and not anesthetize it," said Söder. Germany had already experienced great damage after the “red-green experiment”. - In the end there were five million unemployed people and a mountain of debt to complain about. Germany “must no longer become an“ experimental field for left-wing spinning mills ”.

In the direction of Merkel, he says: “You have led us through huge global crises in an excellent way.

God reward you for this achievement. ”Now it's about Corona.

The country was well led through this crisis and the people were protected.

However, you are currently experiencing how bad thoughts become deeds.

"I'm tired of parties like the AfD inciting people who then challenge our democracy." He firmly condemns the lateral thinker movement.

"If someone thinks they can threaten us, then we say no."

Red-Green-Red is also cited as a nightmare in his speech. “This troop cannot lead our country.” He also railed in the direction of the SPD: “Scholz may be a nice person, he may be able to imitate the gestures of the Chancellor, but he doesn't have what it takes to be Chancellor.” Armin Laschet needs it for that . The Greens, SPD and Die Linke would distrust the people. The Union, on the other hand, wants to renew the country, not "anesthetize" it. Everyone in Bavaria is called upon to vote for the CSU. "Whoever chooses red-red-green unfortunately chooses the relegation of Bavaria."

At the same time, the closer election shows that between the SPD, the Greens and the Left there is “an unbelievable amount of kinship in spirit”.

"FDP does not only mean left voting, but not Bavarian," said Söder.

And: "The most senseless voting that can be made goes to the free voters." Some of the free voters are at their limit with their government work in Bavaria.

Therefore, the CSU boss asks: Both votes for Bavaria.

Chancellor Angela Merkel takes the stage and gives her speech shortly before the general election.

In the last few meters, the Union has to change the minds of those who are still undecided.

Merkel had so far held back in the election campaign of Union Chancellor candidate Armin Laschet.

In the last few days before the deadline on Sunday, September 26th, however, it shows presence.

"Because it doesn't matter who rules, we have always struggled together," says Merkel, referring to the CSU and especially Edmund Stoiber.

During her speech, the Chancellor named companions by name, such as Charlotte Knobloch.

In Bavaria, too, you can see that it doesn't matter who rules.

The Free State is doing so well because the CSU is in power.

Merkel repeats the sentence again and again in her speech: "It doesn't matter who rules Germany." She is certain: "In order for Germany to remain stable, Armin Laschet must become Federal Chancellor."

The joint election campaign of the CDU / CSU in Munich has begun.

CDU and CSU are preparing for their joint election campaign in Munich: CSU General Secretary Markus Blume posted photos from the event hall on Nockherberg in the afternoon - and wrote of “crucial 48 hours” before election day.

Meanwhile, an expert judgment after the TV “final round” on ZDF main speaker Armin Laschet could cause concern or at least anger.

#Politologist Moritz Kirchner saw the top candidate in the final round: inside @janine_wissler @dielinke in front.

The appearance of # CDU Chancellor candidate @arminlaschet was weak for him.

With the presence of @markus_soeder @csu, #Laschet was "pretty flooded".

The political scientist Moritz Kirchner attested in the “phoenix round” of the TV station of the same name a “double Söder paradox” at the expense of Laschet.

The CDU had thought of the appearance of the CSU boss in the group as "reinforcement", he speculated.

"But it has become very clear that the Union should have taken Söder and not Laschet, because, to be honest, it is pretty drowned." Kirchner saw the left Janine Wissler as the winner of the round - among other things, because she was in a dispute about apartment expropriations "played back the thing to Laschet" *.

However, the expert also had praise for FDP leader Christian Lindner and the Green Annalena Baerbock.

With Merkel and Söder - Laschet wants to outdo Scholz today, of all places, in Munich

Munich - the last polls before the day of the election * are slowly coming in - and the race for parliamentary majorities and the chancellery is still largely open. But it is also clear: Olaf Scholz and the SPD will be the favorites on election day *. The last undecided want to reach the Union, SPD and Greens on Friday at rallies. The CDU and CSU have probably the most spectacular plan shortly before the federal election.

Because Chancellor candidate Armin Laschet * (CDU) made his penultimate big appearance in Munich of all places.

So there, from where his competitor for the candidacy teased for months, sometimes angrily.

The Union probably wants to send out a signal of maximum unity.

In addition to Laschet, CSU boss Markus Söder is with the party on Friday afternoon - and Chancellor Angela Merkel (CDU), who had held back for a long time in the election campaign.

However, Laschet, Söder and Merkel do not go to Marienplatz, probably Munich's largest and most central traditional election campaign stage.

The Union has chosen the Nockherberg for its rendezvous.

Every year, politicians are “derbleckt”, ie made fun of, when the strong beer is tapped.

The CDU and CSU should of course have something completely different in mind - a great celebration.

What has struck the hour?

It should start at 4.30 p.m., after all, the election campaign managers in Munich have scheduled a full two and a half hours.

Brass music and an honor salute from the Truderinger Böllerschützen are also planned.

Laschet will still go one better: on Saturday lunchtime, he will perform in his hometown of Aachen.

Once more with Merkel, who is slowly going on a farewell tour - and is now beating the drum again for Laschet.

The two had also appeared in Merkel's still-constituency this week.

Bundestag election: Scholz and Baerbock are also still in action on Friday

Meanwhile, the SPD and the Greens are looking for contact with the voters again on Friday. Laschet wants to turn things around with Söder - but the expert warns after a TV round: "Quite drowned"

Election final with Merkel in Munich: Laschet surprises with statement on Söder's future - "govern together" 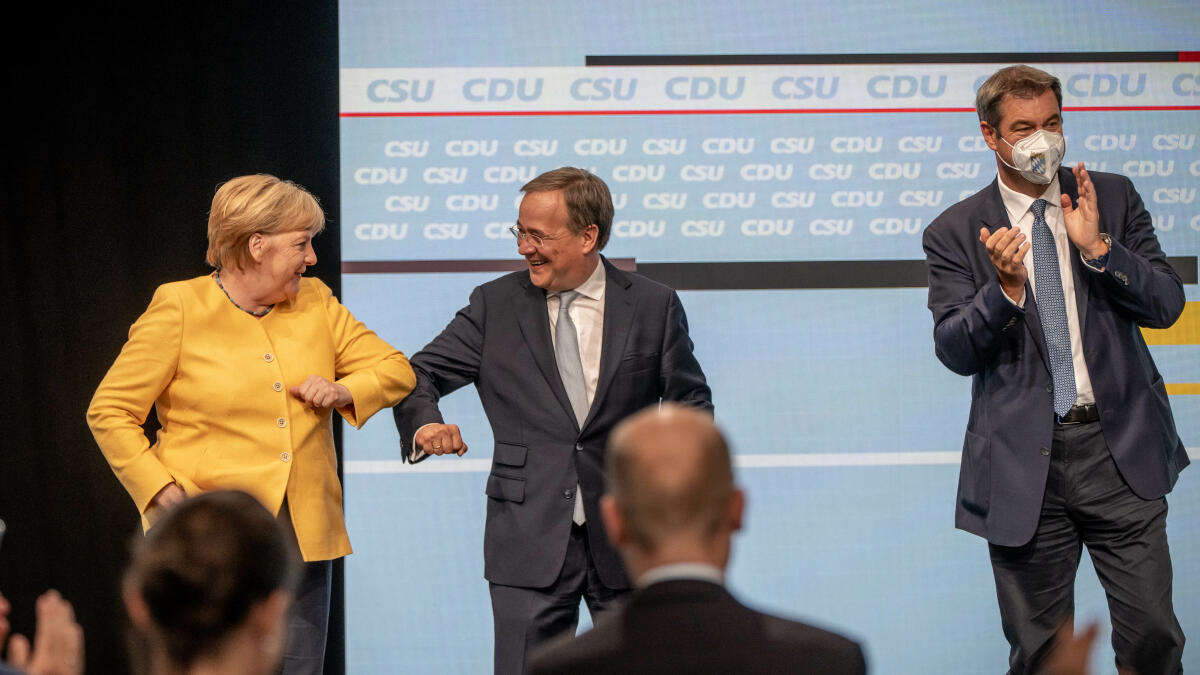 “Dear Armin” - a double U-turn in the Union: Merkel and Söder as Laschet's campaign engines

Merkel and Söder give Laschet a clear mandate: "I don't feel like it"

Merkel and Söder give Laschet a clear mandate: "I don't feel like it"