The volcano has been spitting lava on La Palma for around four weeks. An impressive video showing a “lava tsunami” has now been shared on Twitter.

The volcano has been spitting lava on La Palma for around four weeks.

An impressive video showing a “lava tsunami” has now been shared on Twitter.

La Palma - The volcanic eruption on La Palma has been going on for almost four weeks.

Thousands of people had to be evacuated, several earthquakes shake the Canary Island again and again.

On Friday (October 15th) the lava flow from the volcano has become more violent and much faster.

The volcanological institute of the Canary Islands, Involcan, even spoke in a tweet of a "lava tsunami" in view of the impressive video recordings.

The Twitter video shows the lava, which is more than 1000 degrees Celsius, flowing towards the sea at an enormous speed.

Impresionante velocidad y desborde del canal lávico / today one of our crew was able to film a truly lava "tsunami".

Amazing speed and overflow of the lava channel.

However, the geologist José Mangas, professor at the University of Las Palmas de Gran Canaria, emphasized that the image of a tsunami is a bit crooked in this context.

"In this case, we cannot speak of a tsunami, but of lava flows with a temperature of more than 1200 degrees, which become very fast because of the steeply sloping terrain," he said on the state TV broadcaster

The volcanologist Juan Carlos Carracedo even suspected that the volcanic eruption on La Palma, which had lasted for almost four weeks, had stabilized by the lava running out of the volcano without any obstacles until the pressure subsided.

But when that will be the case cannot be said.

Since the beginning of the volcanic eruption in the Cumbre Vieja in the south of La Palma, more than 7000 people have had to leave their homes below the volcano and get to safety.

The evaluation of the data from the European Earth observation system Copernicus showed that so far 1,548 buildings have been destroyed by the lava and an area of ​​700 hectares has been covered by lava and ash.

That corresponds to around 980 soccer fields.

Nobody has been seriously injured so far.

Sometimes the ashes were so high that only the top of the chimney stuck out of houses.

A German who lives there described the devastating situation on the volcanic island. Volcanic eruption on La Palma: Experts count up to 40 earthquakes - the situation on the holiday island continues to come to a head 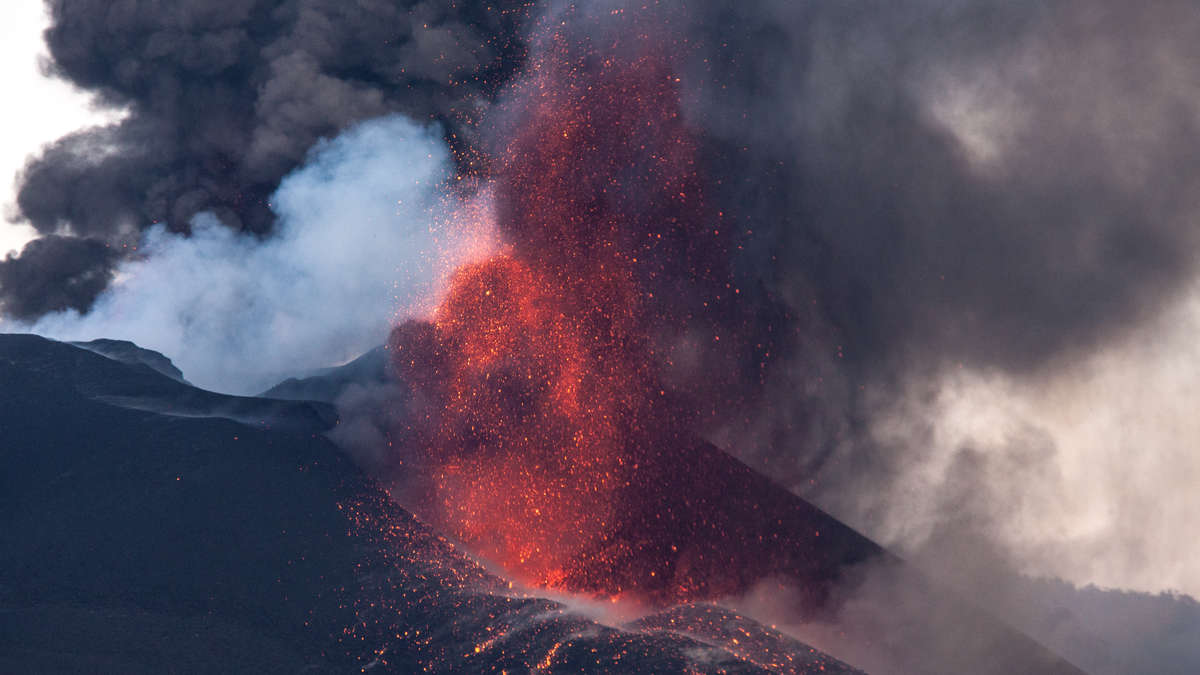