Fatal helicopter accident: three people are believed to have died in a helicopter crash in the north of Baden-Württemberg. Fatal helicopter accident: three people are believed to have died in a helicopter crash in the north of Baden-Württemberg.

Three people were killed in a helicopter crash in the north of Baden-Württemberg.

At first it was unclear whether there were missing people.

On Sunday afternoon, a police spokesman said: "We assume that there was a pilot and two passengers in the helicopter."

According to the police and public prosecutor's office, the single-engine Robinson R44 helicopter with four seats took off in Herzogenaurach, Central Franconia. He had crashed shortly before 1 p.m. over a forest in Buchen - near the border with Hesse and Bavaria - for an initially unexplained cause. Experts from the Federal Bureau of Aircraft Accident Investigation (BFU) wanted to investigate the crash site. Numerous investigators from the police, forensics, fire brigade and a public prosecutor were on site, as the spokesman said. "It's no longer about searching, it's about recovering."

The measures at the accident site continued in the evening and should also be continued on Monday.

However, the results of the investigation are not to be expected too soon.

"It will take a long time until all traces are secured and evaluated," said the police spokesman.

After such accidents, it often takes investigators several days to publish initial assumptions about the cause of the accident.

It usually takes several months before a final final report is available from the BFU experts.

The debris from the crashed helicopter has spread over several hundred meters in the forest.

The scene of the accident is Buchen, about 50 kilometers east of Heidelberg.

A spokesman was initially not aware of whether anyone was still missing.

The background to the accident in Buchen near the border with Hesse and Bavaria was initially unclear on Sunday.

Ambulance and fire services are currently in action.

, the helicopter crashed between the districts of Stürzenhardt and Steinbach.

Roland Burger, the city's mayor, is currently getting an idea of ​​the crash site.

"The situation is extremely depressing," said the police spokesman.

, the crashed flying object is a Robinson R44.

"The debris field is huge," said a local police spokesman.

It extends over several hundred meters in the middle of the forest.

“The situation is extremely depressing.” Some parts of the wreck were lying on the ground, others were hanging in the trees.

While the remains of a rotor blade could still be seen, other debris appeared to be massively compressed.

A body was discovered a good 50 meters from the crash site.

According to data from the Federal Bureau of Aircraft Accident Investigation, helicopter accidents are rather rare.

For 2020 it shows only five accidents with helicopters in civil aviation in Germany * and with aircraft registered in Germany abroad. 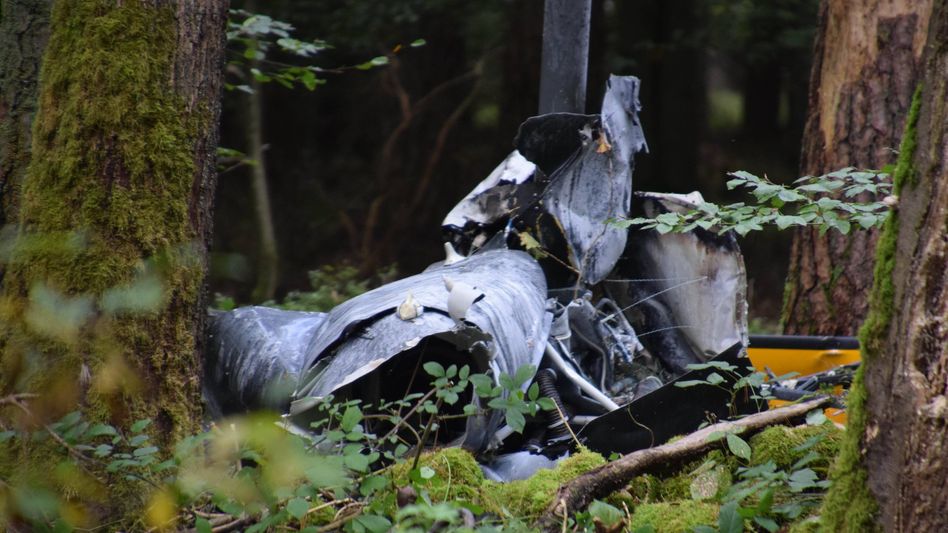