The discovery of the sword may indicate that the natural mooring, where the sword was found, was also used by ships during the Crusader period • Inspector of the Antiquities Authority's Robbery Prevention Unit:

Shlomi Katzin, a resident of Atlit, dived last Saturday with a snorkel in the Hof Hacarmel area.

During the dive, he identified to his surprise on the bottom antique items, which, apparently, were exposed as a result of the activity of the waves and currents, which drove the sand.

At the site he saw ancient stone anchors, anchors made of iron, fragments of pottery, and an impressive sword, whose blade was about one meter long and whose handle was about 30 cm long, about 900 years old.

Fearing theft of the finds or re-covering in the sand due to the activity of the sea currents, an officer took the sword with him and left the sea.

He discovered exemplary citizenship, located the phone number of the inspector of the Robbery Prevention Unit in the north, and reported to the Antiquities Authority.

An officer handed the sword to the state treasurers, and received a certificate of his good citizenship.

Nir Distelfeld, inspector of the Antiquities Authority's Robbery Prevention Unit, noted that "the sword, which has been preserved in perfect condition, is a beautiful and rare find and appears to have belonged to a Crusader knight. Which takes you in the imagination 900 years back in time, to another era, of knights, armor and swords. "

Kobi Sharvit, director of the Marine Archeology Unit at the Israel Antiquities Authority, explained: "There are many natural bays on the Carmel coast, which could be used as hiding places for ancient ships during a storm, and even larger bays, around which entire settlements and ancient port cities developed, such as Dor and Atlit. "Throughout the periods, merchant ships came to them, leaving behind many archeological traces. The recently found sword is just one of them."

The site where the anchors and the sword were discovered has been monitored by the Israel Antiquities Authority since June, after receiving reports of its first discovery from citizens Boaz Langford and Rafael Bahlul.

The finds at the site are revealed and covered according to the movement of the sands, so they are very elusive.

"The discovery of ancient finds by free-swimmers and divers is a growing phenomenon in recent years, with the expansion of these sports," Sharvit said.

"The underwater survey is dynamic. Every storm - even small ones - moves the sand and reveals areas on the seabed, and at the same time, covers other areas. Hence the great importance of reporting the discovery, which we will always strive to document on site to maximize archaeological information. Reported from the site, indicate that the place was used as a small and temporary natural anchorage for ships that found refuge in it. sleep".

Eli Escozido, director of the Israel Antiquities Authority, praised Shlomi for his good citizenship and said: "Every antique object that is revealed helps us assemble the historical puzzle of the Land of Israel. Diver makes a sensational find: the sword of a crusader recovered 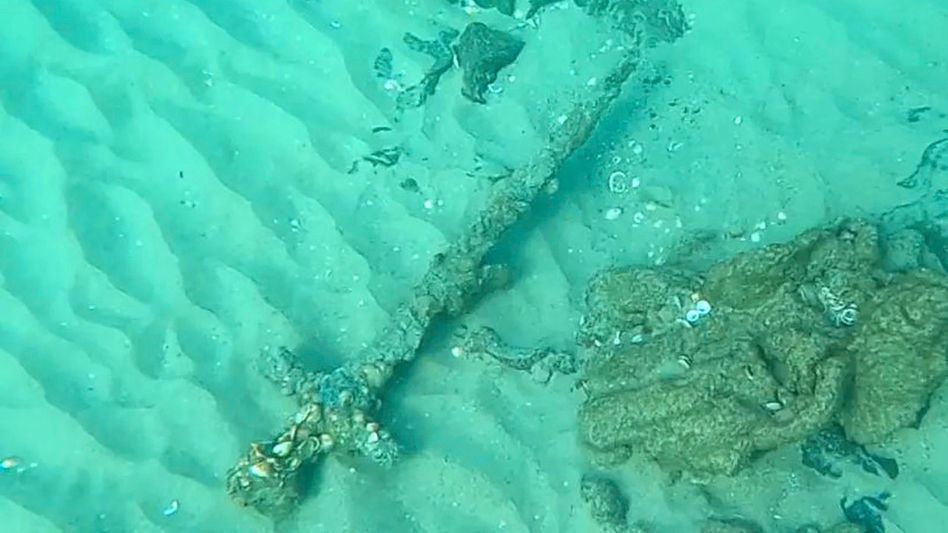 A mysterious island is found and censored in Google Maps - and no one has any idea what it is - Walla! Tourism