The SPD, the Greens and the Left in Berlin are now negotiating a coalition. They have been ruling together since 2016, but still want a "fresh start". They rate the start of their round positively.

The SPD, the Greens and the Left in Berlin are now negotiating a coalition.

They have been ruling together since 2016, but still want a "fresh start".

They rate the start of their round positively.

Berlin - Almost four weeks after the election to the Berlin House of Representatives, the SPD, the Greens and the Left have started coalition negotiations.

At the beginning on Friday, a so-called umbrella group came together, which consists of top politicians from all three parties.

In the course of the next few weeks she is supposed to make all the decisions about what will be included in the coalition agreement.

The government program for the next five years should be ready by the end of November.

In rapid succession: Berlin's parties are sounding out in close rhythm

The new week has started in Berlin with exploratory talks - and the next ones have already been agreed.

The winner of the House of Representatives election and SPD leader Giffey would like to be through with it in mid-October.

However, it remains to be seen whether this will work.

In rapid succession: Berlin's parties are sounding out in close rhythm

Bad omen for the federal government?

Berlin-Greens move away from traffic lights: "Long distances that we still have to go"

The soundings in Berlin are ongoing.

The Greens, however, deviate from a traffic light with SPD and FDP, election winner Franziska Giffey keeps all options open.

Bad omen for the federal government?

Berlin-Greens move away from traffic lights: "Long distances that we still have to go"

Who with whom in Berlin?

Who will rule Berlin in which constellation in the future?

It will be a while before that is certain.

After all, concrete talks begin.

In the end, the election winner SPD is spoiled for choice.

Who with whom in Berlin?

The suggestions for this are drawn up by 16 working groups that cover certain subject areas, were set up on Friday and are supposed to start on Monday. The most important groups include those for household and finance, for urban development, building, renting, for mobility and for business. The three parties, which have been ruling together in Berlin since 2016, each send five to eight representatives to the working groups.

After the eight-hour start of the negotiations, all those involved expressed their opinion positively. "The day went well," said Berlin's SPD chairman Franziska Giffey. First of all, it was about the financial framework for the next five years, among other things. “There is a colorful bouquet of wishes.” But it is now important to see what is possible and what is not. Because it is about investing on the one hand, but also pursuing a responsible financial policy on the other.

The leader of the Greens parliamentary group, Bettina Jarasch, and the top candidate for the Left, Klaus Lederer, also emphasized that Berlin did not want to “save up”.

Against the background of the Corona crisis, the goal is rather further investments in public infrastructure, in a functioning, citizen-friendly administration, in schools, daycare centers or climate protection.

But the new coalition must "prioritize".

In other words, only those projects that can be financed should be included in the coalition agreement.

The negotiations are based on 19 guidelines in an exploratory paper, which the parties agreed on a week ago.

These include an alliance for new residential construction and affordable housing, a “restart program” for the economy, the expansion of the subway and more staff for the police.

In the negotiations, it is now important to substantiate all of this in terms of subject matter and content, explained Giffey.

Jarasch was confident that the three parties can organize the “new start and departure” that Berlin now needs.

One is also “ready and willing” to talk about what has not gone so well in the legislative period that is coming to an end, and to learn from it.

There are points of contention.

A big chunk is the question of how the new Senate is handling the successful referendum on the expropriation of large housing companies, which, like the election for the House of Representatives, took place on September 26th.

The left are in favor of expropriations without any ifs or buts and are pushing for the citizens' vote to be implemented quickly.

The Greens see expropriations as the last resort to secure affordable housing, the SPD is against it.

According to the exploratory paper, an expert commission should examine the “possibilities, ways and prerequisites for implementation” of the referendum and develop recommendations for further action by the Senate within one year.

The exact formulation of the detailed work order will now be exciting.

Members of the “Deutsche Wohnen & Co. expropriate” initiative demonstrated in front of the talks at the Brandenburg Gate and called for the referendum to be implemented quickly.

An initiative for a car-free city center also drew attention to their concerns.

Once the coalition agreement is in place, party congresses must decide on it.

The Left is also planning a membership decision.

If all parties agree, Giffey could be elected as the new governing mayor on December 21st.

“Our common goal is for the new state government to be in place this year,” she said.

FDP: Want to continue to take responsibility for the city

Kapek: 20,000 new apartments per year are not a big problem

It remains difficult: the coalition question in Berlin remains open 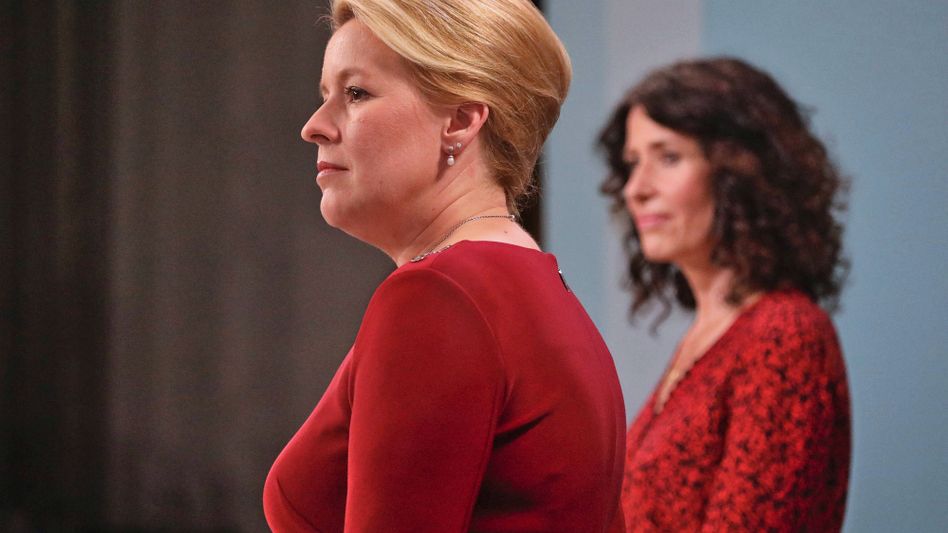 Müller: Surprise at the announcement of his resignation