The volcano on La Palma is more active than ever before. Huge fountains of lava shoot into the sky. Before that, the volcano's cone partially collapsed.

The volcano on La Palma is more active than ever before.

Huge fountains of lava shoot into the sky.

Before that, the volcano's cone partially collapsed.

Santa Cruz - The events overturn since the weekend on the vacation island of La Palma.

The volcano has hardly lost any of its strength.

After a partial collapse of the main cone, huge masses of lava flow into the valley.

Fate in the La Laguna district is still in jeopardy, even if the crowd is barely moving at the moment.

But more lava flows have broken up.

One in the southern area of ​​the volcano flows through the area of ​​Las Manchas.

According to calculations by the Geographical and Mining Institute of Spain (IGME) at around 50 meters per hour.

To do this, the lava rolls further down the northern flank.

Volcanic eruption on La Palma: no end in sight

The strongest earthquake since the beginning of the volcanic eruption (September 19th) shook the whole of La Palma with a magnitude of 4.9.

And the start of the sixth week after the outbreak hardly bodes well.

This Monday (October 25th) around 9.25 a.m. (Canarian time) another part of the volcanic cone collapsed.

The consequences are worrying: "A huge lava fountain", as the Volcanological Institute of the Canary Islands (Involcan) reports via Twitter.

Lava has been pouring out of it into the valley for hours.

The outbreak is enormous, as new video recordings on social networks show every hour.

The landslides have changed the appearance of the volcano.

The damage caused by the volcanic eruption on La Palma is enormous.

According to the data from the Copernicus satellite, which only analyzes buildings without specifying the type, 2146 buildings have been destroyed.

More than 900 hectares are covered by a meter-thick layer of lava.

If and when the volcanic eruption on Cumbra Vieja will end?

It is a question that researchers can hardly commit to at the moment.

Once the volcano took an eerie pause.

At the moment, however, the situation is very different. 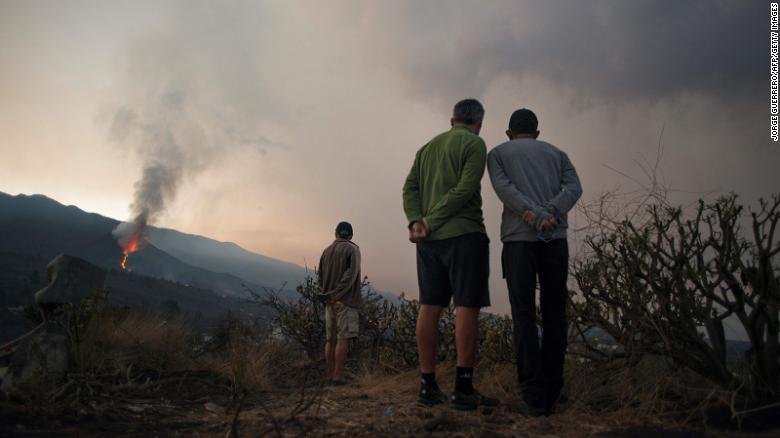