The North Rhine-Westphalian state parliament has elected Hendrik Wüst as the new Prime Minister - and said goodbye to Armin Laschet in political insignificance. About a day of contrasts. 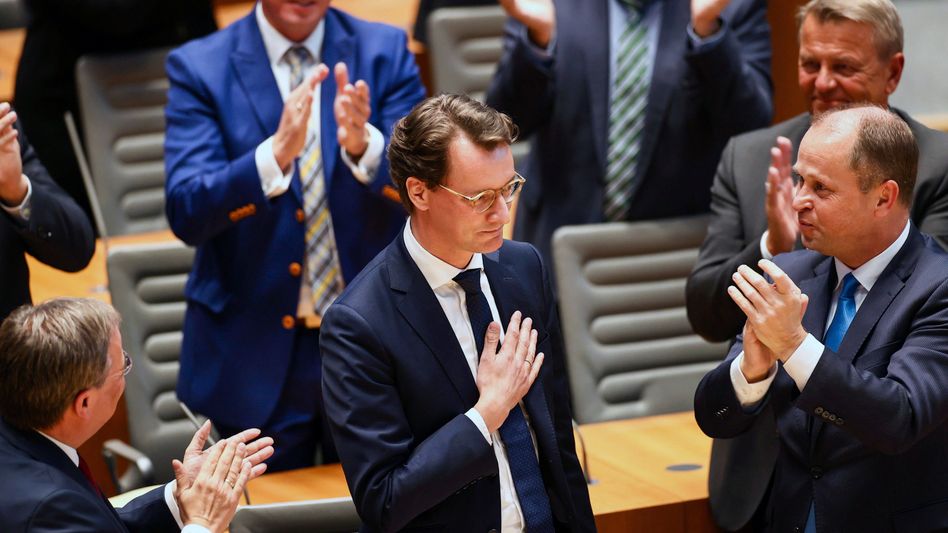 New Prime Minister Wüst: "A country where the internet is fast and CO₂ levels are falling"

Hendrik Wüst remains seated with folded hands while everyone around him jumps up and cheers.

The President of the State Parliament has just announced the election result: 103 MPs have voted for Wüst.

After a few seconds Wüst gets up from his seat, puts his right hand on his heart, nods devoutly.

Armin Laschet is standing next to him, he stretches his arm up and would like to clap with wildness.

But Wüst does not see Laschet's hand.

At this moment there is only one thing left for the previous Prime Minister: to applaud the newcomer.

Unless you're planning bridges or bike paths, then you've probably heard of him.

Wüst became Minister of Transport in Laschet's cabinet in 2017.

He has not attracted much attention since then, he was not someone who pushed his way forward, nobody who sat on talk shows like Health Minister Karl-Josef Laumann or Interior Minister Herbert Reul.

But in contrast to others who wanted to inherit Laschet, Wüst has a mandate in the state parliament.

This is what it takes to become Prime Minister of North Rhine-Westphalia.

This is what the state constitution says.

The mandate was his first asset.

His second was that Laschet recently spoke out in favor of his transport minister as his successor.

In the NRW CDU, Laschet's word still has weight, despite his performance as a candidate for chancellor, despite the debacle in the federal election.

On Tuesday Laschet took up his mandate as a member of the Bundestag, he is now doing politics in Berlin.

The project to elect a new prime minister during the legislature was a delicate political operation.

Things could easily have gone wrong for the black-yellow coalition.

The CDU and FDP only have one vote majority in the state parliament, one deviator would have been enough to screw up the tour Wüst.

A short swearing-in, then Wüst comes to the lectern for his first speech as head of government.

He accepts the task with respect, he says.

"I know courage and departure will pay off." He talks about his little daughter, she and his wife watch from the visitors' gallery.

Shortly before the special session, Wüst demonstratively pushed a stroller into the state parliament, past the waiting photographers.

He will be a prime minister who knows and uses the power of images.

After his inaugural speech, everyone can congratulate, the MPs stand in a row.

From him Wüst receives a bouquet of flowers and a pat on the arm.

On this Wednesday in the state parliament there is more to be seen than the enthronement of the twelfth Prime Minister of North Rhine-Westphalia.

It is a day on which the unexpected ascent of the one seals the tragic decline of the other, on which it becomes clear that one can get into the highest political offices in unconventional ways, as a largely unknown head.

And also how quickly you can get rid of your posts if you gamble yourself.

1 p.m., beginning of the meeting, first item on the agenda: »Farewell to the former Prime Minister«.

Laschet comes to the front to say "a few words of farewell".

He wanders through 16 years of state politics, talks about the refugee crisis and structural change.

So he thinks it is a good idea to defend his corona policy again.

The state government “did not fall into omnipotence fantasies” during the pandemic, says Laschet, everything was questioned, even if some outside of North Rhine-Westphalia “interpreted it as hesitation”.

Many greetings to Markus Söder, that's how it sounds.

It seems as if Wüst has to comfort Laschet

"It was a pleasure for me," says Laschet.

Then he sits down next to Wüst, who pats his forearm.

As a candidate for chancellor, Laschet announced months ago that he would go to Berlin after the federal election. At that time he was firmly convinced that the Union would win the election, that the movers would bring his desk, ashtray and paintings from the Düsseldorf State Chancellery to the Chancellery. Now his furniture ends up in a conventional representative's office in the Bundestag.

Laschet does not become chancellor, but he still keeps his promise to change. This is difficult for him under the changed circumstances. He is currently leaving one office after the other, not because he wants to, but because his plan did not work out and he has no other choice. It's a multi-stage retreat. It is like trying to peel a patch off your skin very slowly in the hope that it will hurt less. In truth, it hurts even more.

Last Saturday, the NRW CDU had elected Wüst as Laschet's successor at the head of the regional association.

On Monday, Laschet submitted his resignation as Prime Minister to André Kuper, President of the State Parliament.

A remarkable photo was taken.

The office was a "great honor".

You could feel: someone is suffering.

In the state parliament he also talks about how he said goodbye to his cabinet a few days ago.

Laschet will also soon give up the post of CDU chairman.

It looks like he will not play a formative role in the parliamentary group.

It is said that he will deal with international politics, with Europe.

From agitator to softie

The pandemic, reconstruction after the flood, affordable housing - these are the topics he named on Wednesday.

He wants a country, says Wüst, "in which the Internet is fast and CO₂ values ​​are falling".

Next week he would like to make his first government statement.

Wüst used to belong to the conservative CDU wing, he was considered an agitator.

Seen in this way, he has become a political softie.

Today he presents himself as a middle-class man, he talks a lot about "decency" and "attitude".

Wüst studied law and worked in a management consultancy.

In 2010 he resigned after the CDU had offered potential party donors one-on-one talks with then Prime Minister Jürgen Rüttgers.

Things then went better as Transport Minister, drawing more federal funds for roads and rails than his predecessor.

Wüst has to make an effort to stay up there

It was only six weeks ago that Wüst traveled through North Rhine-Westphalia as a minister and celebrated the start of construction of new cycle paths with a groundbreaking ceremony.

Now he is head of government in the most populous state.

He is the spokesman for all Prime Ministers because NRW took over the chairmanship of the Prime Minister's Conference on October 1st.

As head of the NRW CDU, he leads the largest and most influential regional association of his party.

It can go uphill that quickly.

But Wüst will have to make an effort to stay up there.

A new state parliament will be elected in May 2022.

In an Infratest survey for the WDR, the CDU in NRW only got 22 percent, the SPD 31st. Wüst wants to contest the state election campaign under the motto "You count".

And that is appropriate.

Laschet, Wüst does not leave a well-ordered house, but rather a shack, in great need of renovation.

CDU in NRW: Laumann no longer runs for the board

Laschet appeals to the unity of the NRW CDU

Wild boar controversy | once helped the Fisheries and Conservation Department to sterilize wild boar veterinarian to approve pig killing subordinate policy: it should be the last resort
2021-11-29T09:11:32.770Z

Teachers and students of Ling will be vaccinated when entering the campus next semester, and those who are exempted will be tested every seven days
2021-11-29T08:47:48.564Z

Coronavirus disease. Latest｜A total of 3 cases of Omicron variant virus have been recorded Chen Zhaoshi: not in the community
2021-11-29T08:36:12.008Z

Zhao Jiaxian’s Ear Biting and Slinging Case | The defense alleges that the defendant was affected by drunkenness and did not meet all the conditions of the disease
2021-11-29T08:30:09.288Z