In Austria - Stops Only Without Vaccines | Israel today

Austrian Chancellor: "Two-thirds of the population should not lose their freedom because of one-third" • The Netherlands and Germany are also focusing on restrictions on vaccine opponents 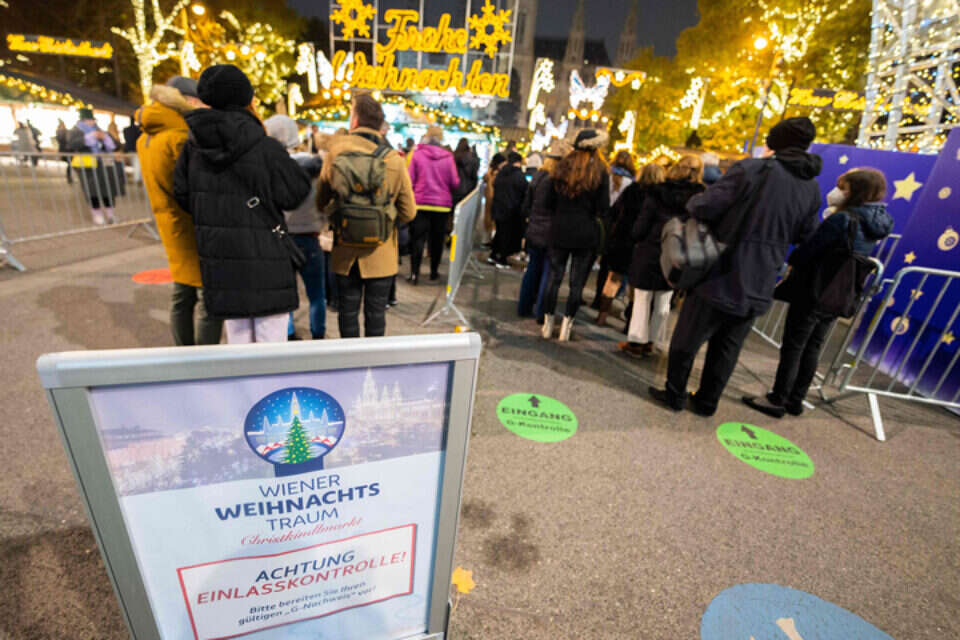 The fourth wave of the corona is hitting Germany, Austria and the Netherlands, prompting them to take dramatic action against the unvaccinated, to prevent the spread of the disease ahead of Christmas events.

Millions of Austrians are preparing to enter a full closure starting this coming Monday, after the state authorities announced that "there is no alternative but to implement the exceptional measure", which is intended for the unvaccinated population only, in view of the sharp rise in morbidity.

One of the hotspots that is about to suffer from the move is the province of Upper Austria, a country with extremely low vaccination rates and a significantly higher number of infections compared to the rest of the country.

However, it has not been explained how the selective closure will be enforced.

Although so far about 64 percent of the population has been vaccinated in two doses (5.7 million people), new Chancellor Alexander Schlenberg said on Thursday that he estimates it is a "very low" number, while the daily average of those infected over the past week was about 10,000 verified a day.

Following the selective unvaccinated closure will be limited to essential needs such as work and shopping in supermarkets only.

"I do not understand why two-thirds should lose their freedom because of one-third," Schlenberg explained.

A partial closure hovers over the European country, and is expected to last about three weeks, given new record numbers since the onset of the epidemic.

The bars and entertainment venues will close their doors earlier than usual, and sporting events will be without crowds.

The government announced the move yesterday after a weekend with more than 13,000 infected on Friday and another 16,000 on Saturday.

A police officer in Eindhoven prevents passers-by from entering a restaurant in the evening, Photo: IPI

"As for those responsible, they need to be dealt with better. We can not let things be measured in front of people who are not vaccinated or do not want to be vaccinated, that's not how it should be," a local resident told Reuters.

With numbers of almost 50,000 infected each day, the European superpower is facing a particularly difficult challenge against the backdrop of failed attempts to stop the spread of the virus.

As a result, some provinces in Germany are on the verge of tightening restrictions and repeating certain measures, such as free corona tests, after questions were lifted last month.

Earlier this week, Germany warned of doubling mortality in the country following the virus.

Virologist Christian Drosten, who advised Chancellor Merkel at the start of the epidemic, warned that the death toll in the country, which is approaching 100,000, could double, and Berlin had already announced restrictions on the unvaccinated.

While in Europe coronary heart disease is on the rise, the United States is in the process of vaccinating children aged 11-5, and so far more than 900,000 children have been vaccinated in the first week of the vaccination program.

Jeff Zaints, the federal immunization coordinator for President Biden, announced that more than 700,000 vaccines for Corona had been issued in pharmacies across the country and hundreds more had been received in hospitals and pediatric immunization centers.

"Millions of parents across the country are already breathing a sigh of relief, and we're just starting the process," Zaints said in a press release over the weekend.

The vaccination procedure suffers from delays due to the need to pack and ship the reduced vaccine doses for children, which were finally and officially approved only at the end of last month by the Food and Drug Administration and the Centers for Disease Control and Prevention in the United States.

A new outbreak in China

While China has not experienced a mass outbreak of the corona virus since it emerged into the world in late 2019 in the city of Wuhan, Beijing's zero infection's policy is in danger of collapsing in the face of more and more cases being discovered in various parts of the country.

It seems that the virus continues to spread, despite the strict closures and the uncompromising isolation policy.

In the northeastern city of Dalia, tens of thousands of students went into complete isolation following a large chain of infections with the delta variant of the virus, which was discovered in the city's various educational institutions.

City authorities have reported 52 symptomatic cases of corona disease, and experts fear hundreds of more cases have not yet been detected in the city. Austria returns to full closure, obliging all its citizens to get vaccinated against Corona - Walla! news

Austria celebrates revenge in Israel: "We had an open account with them" - Walla! sport