With a duty of isolation, without public transportation from Ben Gurion Airport: New corona regulations come into force - Walla! News

How many days of isolation will apply to returnees from abroad, how long will GSS personnel operate, what are the red states, how will it be possible to get back and forth from the airport, who will be required to stay in hotels and what has changed its green daughter? All the new regulations that will try to stop the outbreak of the South African variant in Israel

With a duty of isolation, without public transport from Ben Gurion Airport: the new corona regulations came into force

How many days of isolation will apply to returnees from abroad, how long will GSS personnel operate, what are the red states, how will it be possible to get back and forth from the airport, who will be required to stay in hotels and what has changed its green daughter?

In the video: congestion on departing flights despite restrictions on returning to Israel due to the discovery of the Omicron strain (Photo: Reuven Castro)

The new regulations approved by the government in an attempt to stem the eruption of the Omicron variant went into effect tonight (Monday) at midnight.

This, after it was located a second verified for the variant in Israel.

According to regulations, all those landing in the country will be required to be isolated and two negative PCR tests, public transportation for those leaving the airport will be stopped except for taxis, and Shin Bet will be activated until Thursday.

All returnees from red countries A week, when they first move from Ben Gurion Airport to a motel.

Upon receiving a negative result of the first test performed as usual at Ben Gurion Airport or at the end of 24 hours - they will continue with home isolation during which they will be required for further examination. For two tests.

Without public transportation: These are the new regulations for those landing at Ben Gurion Airport in the shadow of the Omicron

Exit from the field will only be possible by private car or taxi.

At Ben Gurion Airport, passengers from trains and buses arriving at the field will be allowed to drop off, but public transportation departing except for taxis will be discontinued. taxi service goes through, will operate in occupancy to 50% of a joint trip to a residential address.

also, given a 50% discount in parking lots for private vehicles, and will be an integral transportation field workers.

traveling from Eilat to Ben Gurion Airport for domestic aviation will land at terminal 3, there will Free shuttle service to Savidor Merkaz station in Tel Aviv, subject to presentation of a flight ticket from Eilat.

Returners from international flights will not be able to board a domestic flight and will be required to comply with the insulation obligation regulations.

The entry of foreigners into Israel will be banned from all countries, except in cases approved by the Exceptions Committee.

As for the green mark, yesterday the Corona Cabinet confirmed that in closed spaces, the mark will be applied at a gathering of more than 50 participants - instead of one hundred participants as was customary until now.

For now, the shows and activities on Hanukkah will be left unchanged, "in accordance with the outline approved last week, while adhering to the rules of the green label and implementing increased enforcement."

A 50% discount will be given at private car parks.

The government also approved the operation of GSS locations to locate the contacts of the Omikron verifiers, until Thursday. It was clarified that the GSS will not deal with the enforcement of the isolation rules and that in case of widespread morbidity, the use of locations will be stopped.

Health Minister Nitzan Horowitz explained after the decision that "the operation will be very temporary, very spot on, very controlled and limited. Unlike in the past, it will be for a limited number of people only to people suspected in front of this variant to interrupt the infection chains."

Horowitz, backed by top Ministry of Health officials, further stressed that the vaccine continues to be "critical" in the fight against the spread of the virus, even in the face of the new strain.

Without public transport: these are the new regulations for those landing at Ben Gurion Airport in the shadow of the Omicron - Walla! News

With a duty of isolation, without public transportation from Ben Gurion Airport: New corona regulations come into force - Walla! News

From eight passengers and up: Minister Michaeli's solution for public transportation on Saturday - Walla! news

The new Ben Gurion Airport regulations have come into force: these are the citizens who will not be required to be isolated back from abroad - Walla! news

5 days after the restrictions are lifted: The trains and buses at Ben Gurion Airport will resume operations - Walla! News

How many really got infected, and who is trying to locate: the spread of the Omicron variant in Israel - Walla! news 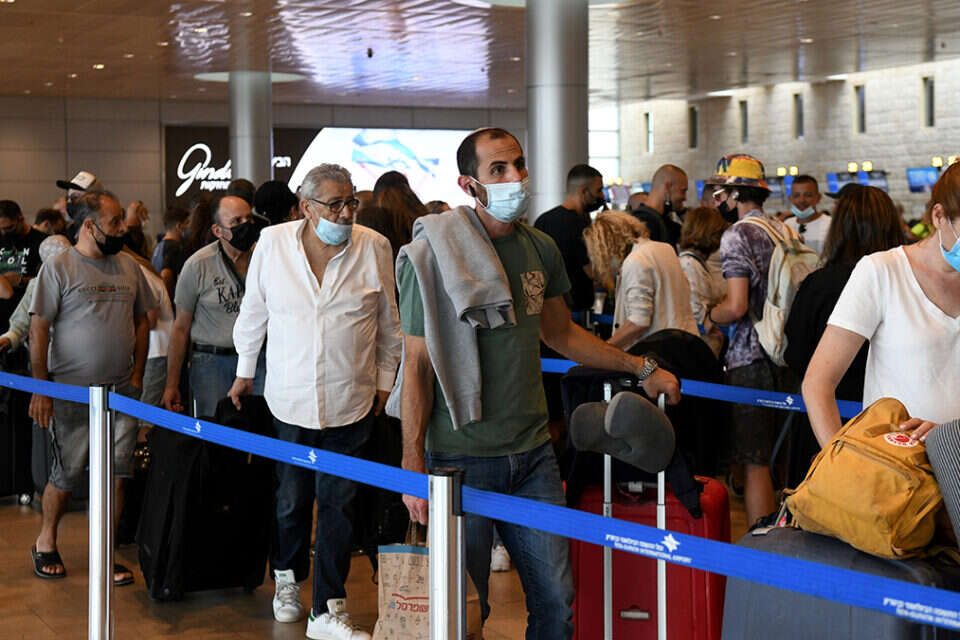 New regulations at Ben Gurion Airport: Those landing at the airport will not be able to use public transportation | Israel Today