The Hong Kong Journalists Association will hold its annual fundraising party on the 28th next month. The Chairman of the Association of Journalists, Chen Langsheng, revealed on the radio program this morning (29th) that some organizations and enterprises that had pledged to sponsor "buy channels" last year indicated that they do not need to publicly announce 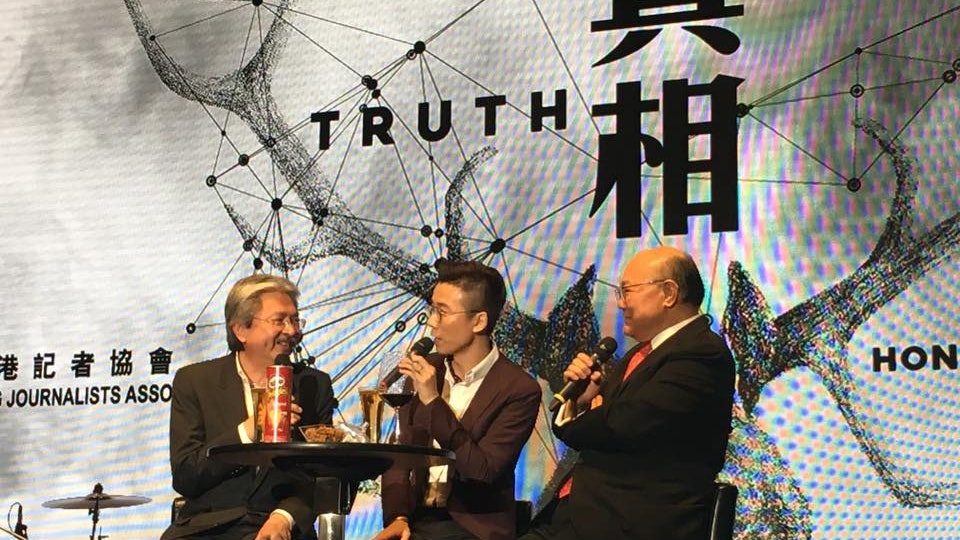 The Hong Kong Journalists Association will hold an annual fundraising party on the 28th next month. The Chairman of the Association of Journalists, Chen Langsheng, revealed on the radio program this morning (29th) that some organizations and companies that had pledged to sponsor "buy Taiwan" last year indicated that they do not need to acknowledge publicly, Chen described At present, the Association of Records is like "Don't get close to strangers", expressing understanding but also feeling sad.

It is reported that the Records Association has repeatedly dismissed fires with officials in the air in recent months, and the relevant decisions are likely to be related to political pressure.

In fact, the annual fundraising dinner is a tradition of the Association. In the early days when the media, the government, and the establishment had a better relationship, the attendees could be said to be star-studded, and there were many high-ranking officials and celebrities. Liang Zhenying, who was attacking the media, was once a guest, and even the reporters on the scene supported him to run for the chief executive.

However, time has changed. In recent years, political conflicts in Hong Kong have heated up, and the relationship between the media and the government has also become tense. In recent months, the Secretary for Security Tang Ping-keung has questioned the neutrality of the HKIA more times. "Avoiding the auspiciousness" at the banquet of the Association of Records was also expected.

Tung Jianhua was a guest speaker

In the early days of the reunification, the relationship between the government and the media was quite good. The banquets of the Association of Journalists were often crowded with fierce people from the political and business circles.

Former Financial Secretary Leung Kam-song and Tsang Chun-wah, the late "gambling king" Stanley Ho, and former Secretary for Financial Services and the Treasury, Ma Shi-hang, were among the guests at the HKIA's dinner.

These high-ranking officials and celebrities also have witty remarks from time to time. For example, when Liang Jinsong attended a dinner in 2002, he laughed and pointed out that Hong Kong reporters were "diligence and active, but they asked too many personal questions."

The Journalist Association often speaks on social affairs, which differs from the government’s position from time to time. The "Freedom of Speech Report" published every year mentions the threats to freedom of speech and press in Hong Kong. For example, it questioned Article 23 of the Basic Law in the 2003 report. Articles of legislation are "false security" and so on.

One or two years before he ran for chief executive, Liang Zhenying often visited people from all walks of life. For a time, he had a very friendly relationship with the media and made friends with reporters.

He personally attended the fundraising dinner of the Association of Journalists in May 2011. One of the hot topics at that time was the long working hours and low income of journalists.

The then "Headline News" host Zeng Zhihao asked how much the reporter's hourly salary should be worth. Liang Zhenying smiled and said "280 mosquitoes", and the "meal clock money" was doubled and the rest days were doubled.

Since Occupy Central in 2014, the society has been in opposition to "yellow and blue", but the annual dinner of the Association of Journalists still has the support of major public institutions, banks, and political parties to "buy Taiwan"; in the 2017 Chief Executive election, the Hong Kong Journalists Association held a candidate forum, Carrie Lam Some also attended and signed the "Press Freedom Charter" of the Journalist Association, promising to protect press freedom.

However, in anti-amendment cases, frontline reporters have conflicts with the police on the spot and the focus of their interviews from time to time. Reporters have repeatedly complained of being treated roughly. The police believe that the behavior of individual reporters may constitute an obstacle to the police, and they suspect that someone has been infiltrated. A group of reporters attacked the police.

In social and political incidents, the Association of Journalists was questioned by the establishment as lacking neutrality. In addition to the aforementioned interview highlights, "Liang Fan" columnist Qu Yingyan once questioned that reporters often stood between "Hong Kong independence mobs and Hong Kong police" and " Abusing the freedom of the press to block police enforcement" also claimed that the threshold for joining the Association of Journalists was low; Liang Zhenying also made a public prosecution, saying that he had edited a student newspaper, had been a director of a media organization and a radio current affairs program host, and asked for a membership card. The entry barrier for the Irony Journalist Association is low.

In 2017, Carrie Lam signed the "Press Freedom Charter" of the Association of Journalists.

Until this year, the relationship between the HKIA and the government was close to a break. The Secretary for Security Tang Ping-keung repeatedly criticized the HKIA for "infiltrating the campus", "suggesting" its public membership list and financial status, and even called its past condemnation. The statement owes neutrality and so on.

This year’s fundraising banquet has experienced many twists and turns, and it has been postponed many times due to the epidemic. Donors seem to not want to get involved in politics. The entire banquet is scheduled to only be attended by 240 people. It is conceivable that the star-studded picture of the dinner will no longer be seen. .

The sponsors of the fundraising dinner requested not to publicly acknowledge Chen Langsheng: If a stranger should not be near the "Headline News", he was accused of falsehood and the police were warned. Reporting Award" Journalist Association: I hope to re-run "The Economist" in the future. Journalists who are refused work visas will be renewed. The Journalist Association urges the Immigration Department to clearly explain the reasons 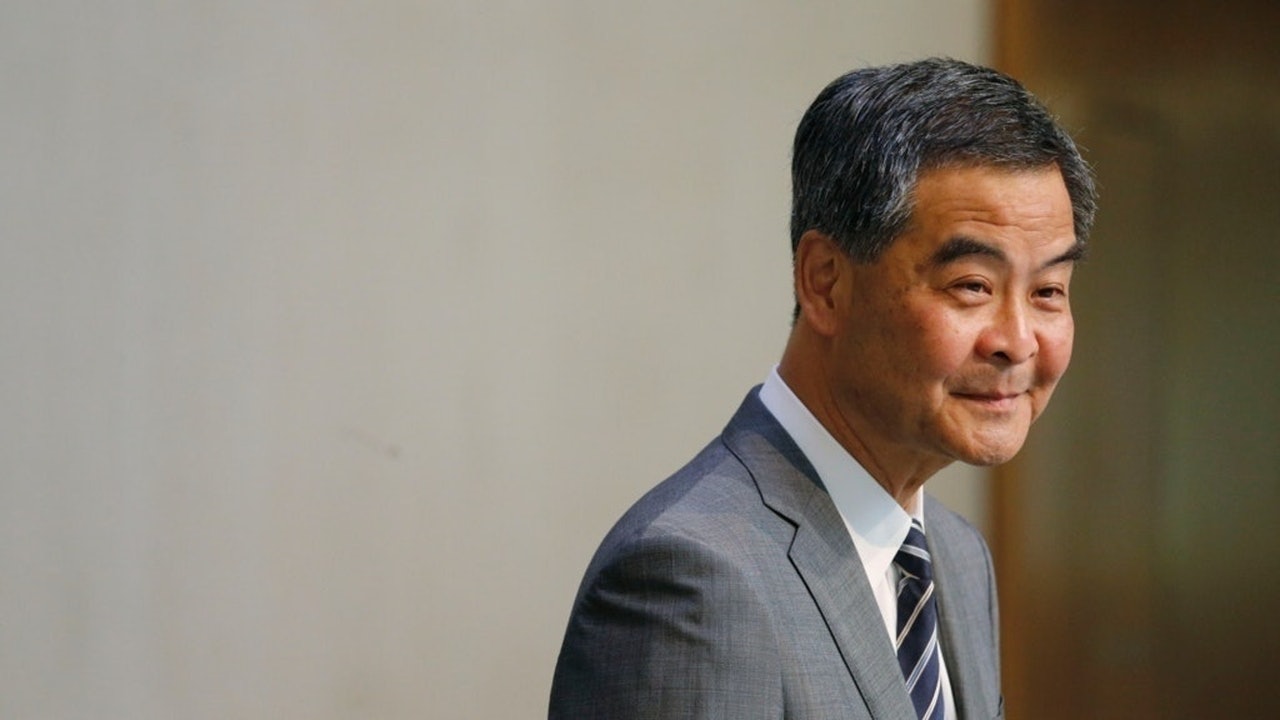 Should there be competition in the chief executive election? Leung Chun-ying: Let nature take its course and did not answer directly whether to fight or not 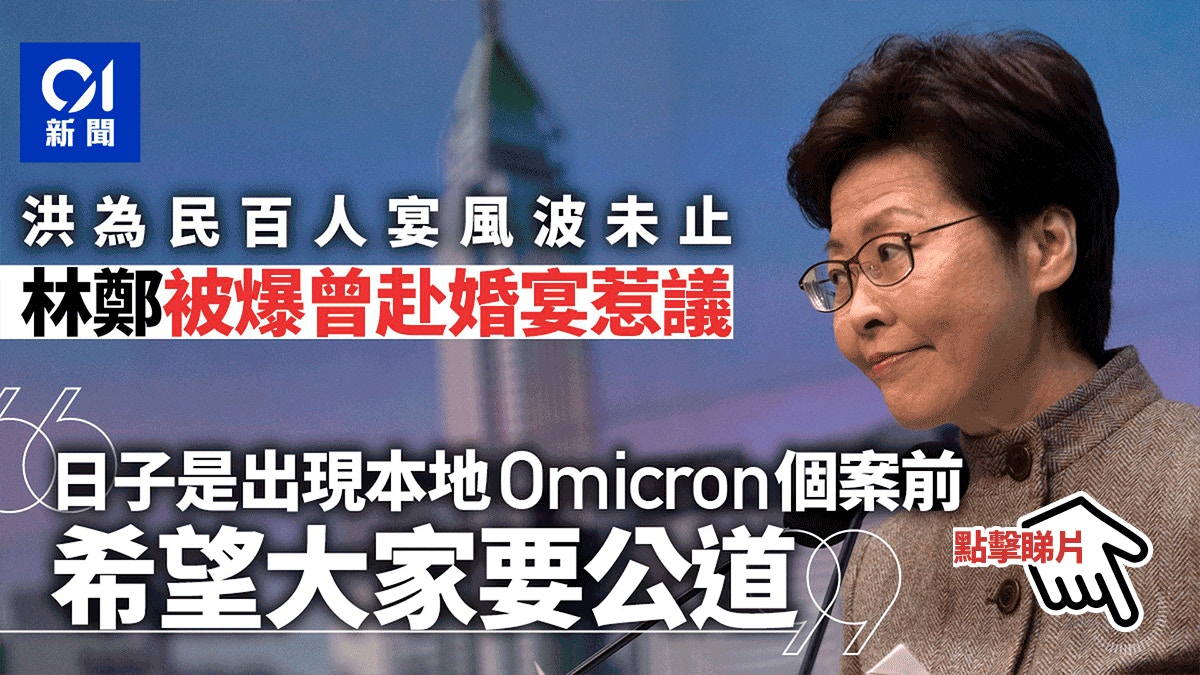 Carrie Lam counterattacked after being exposed at the wedding banquet: At that time, when the Omicron epidemic was not under control, he attended the meeting many times 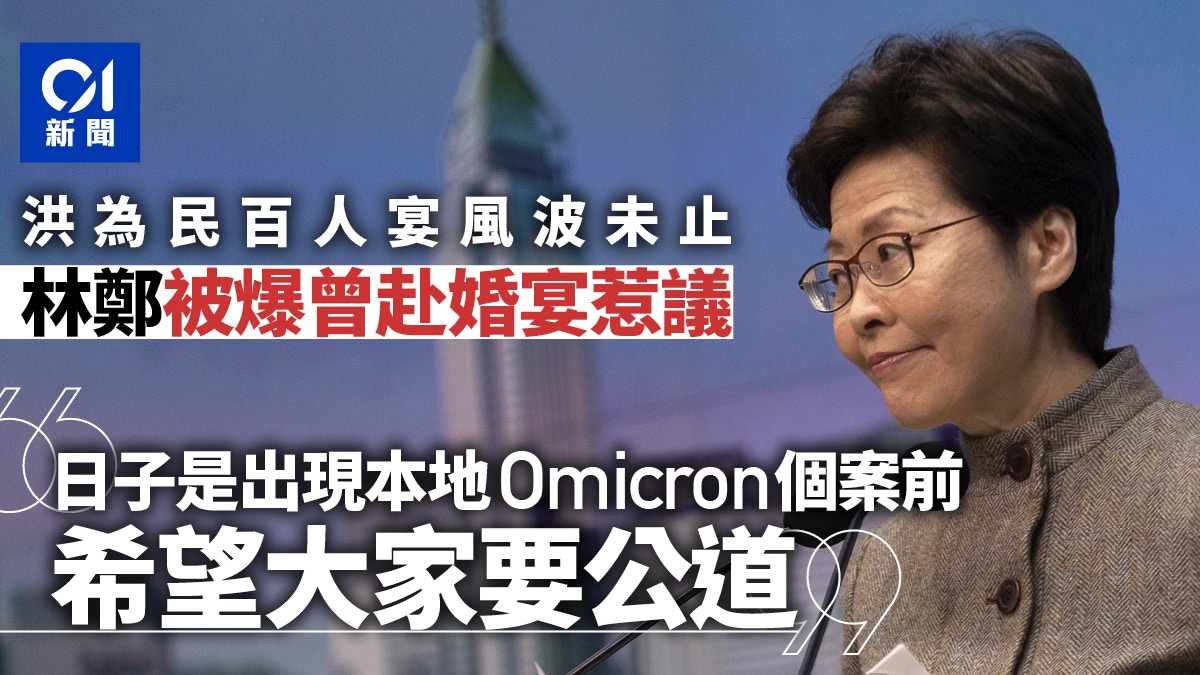 Lam Cheng counterattacked after being exposed at the wedding banquet: there was no Omicron epidemic at that time, and he went to many parties 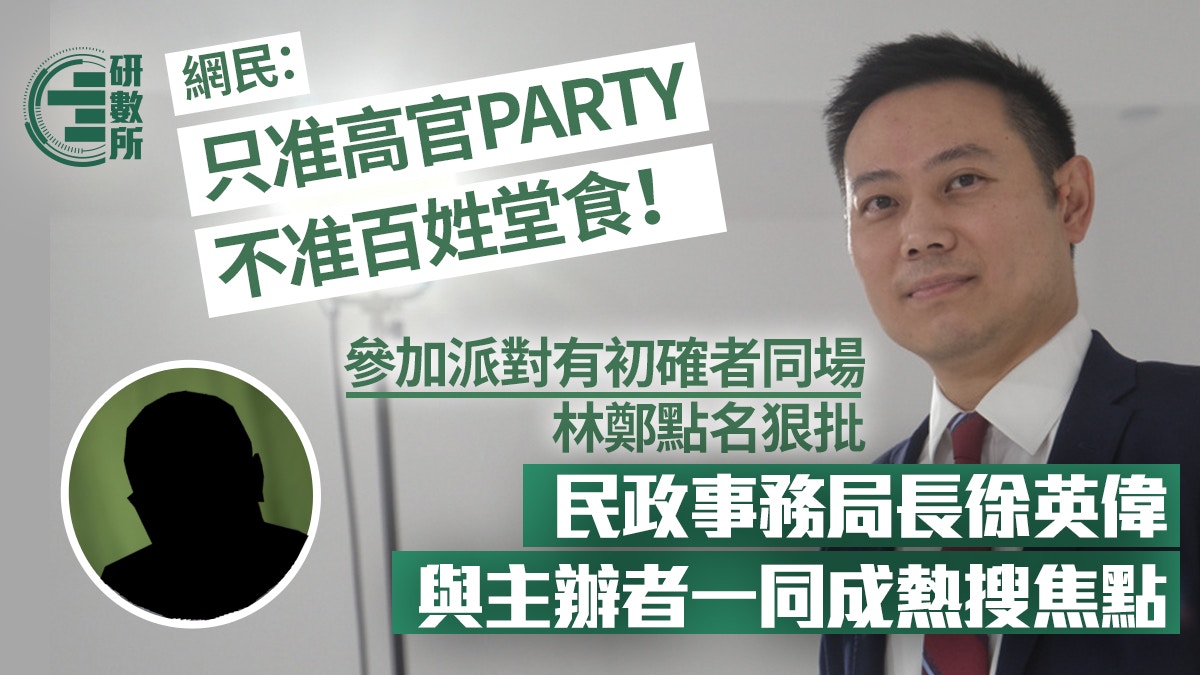 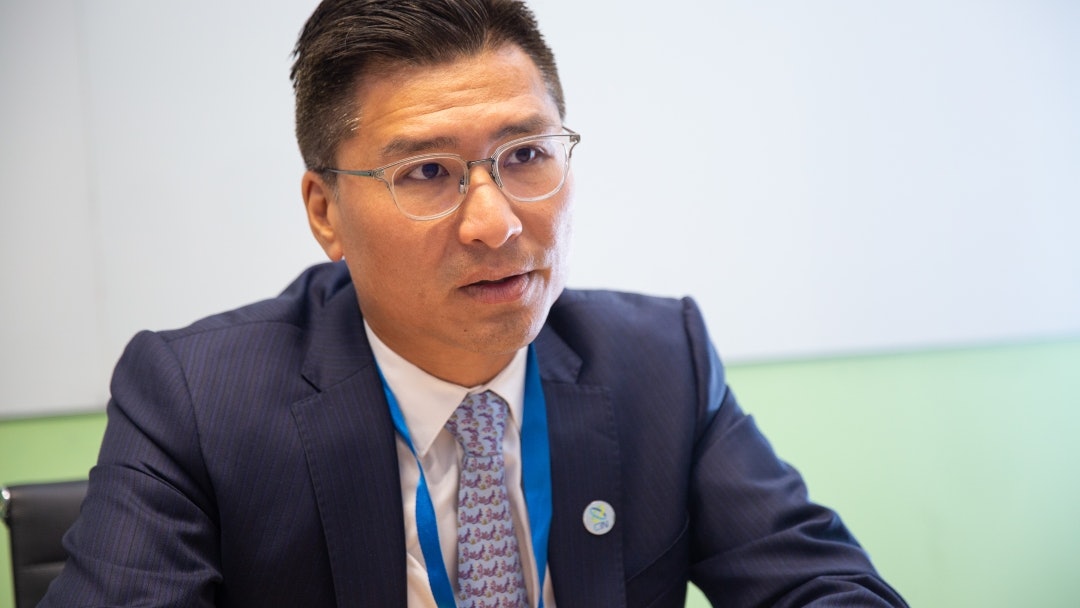 Party of Senior Officials│ Chen Zhongni and other 4 new members of quarantine and quarantine, Qiu Dagen, regretted that he was absent from the first meeting 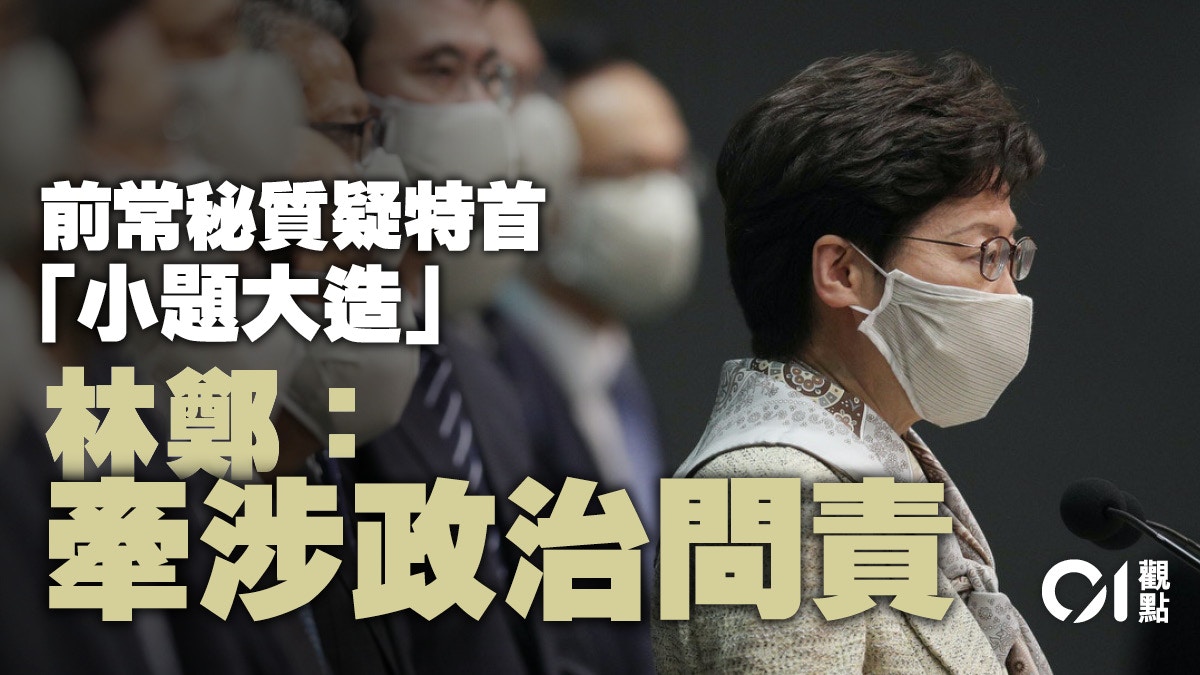 After all, it is a thinking without a sense of governance.

Omicron｜Pei Ho Street Market will close early at 7pm tonight for thorough cleaning and disinfection, and the stalls will reopen tomorrow
2022-01-21T08:25:53.302Z