With a theme called Gifts from the Heart, the first lady of the United States unveiled her first White House Christmas decoration. 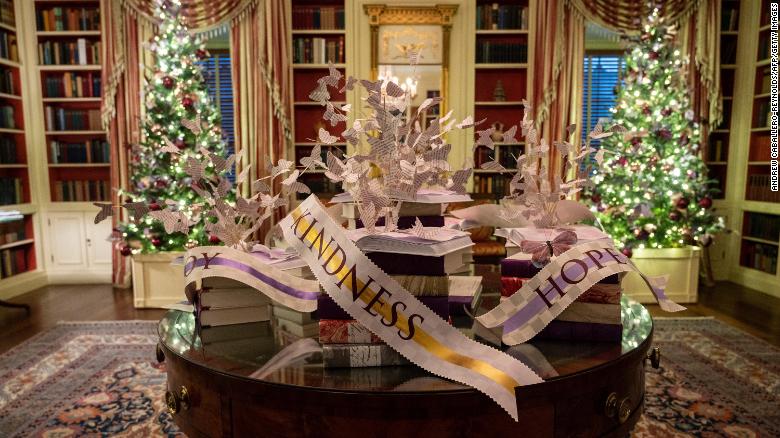 Which Christmas tree does less damage: natural or artificial?

The White House unveiled its Christmas decorations Monday, which follow the theme selected this year by First Lady Jill Biden, who titled her inspiration "Gifts from the Heart."

West Wing communications director Elizabeth Alexander told CNN that Biden's theme idea was to show "things that unite and heal, and unite us."

Biden and the east wing began planning the Christmas decorations in early summer, adjusting the ideas and beginning to envision how they would be realized.

This is what the decorations in the library look like during a press preview of the White House Christmas decorations in Washington on November 29, 2021. (Credit: ANDREW CABALLERO-REYNOLDS / AFP via Getty Images)

In each of the public rooms of the White House, which is closed to visitors due to the covid-19 pandemic, there is an individual representation of the subject.

The Library Room has butterfly decorations, reflecting the "gift of learning," while the Vermeil Room highlights the "gift of visual arts" with Christmas wreaths made of paint-dipped brushes and a tree of colorful sample ornaments. Pantone.

In the China Room, which displays porcelain items from previous presidential administrations throughout the year, a "Nana-style" table was set up, according to Alexander, a nod to Biden's favorite family dinners, with candle centerpieces. and flowers.

On the trees in the room, which had a "gift of friendship and love" theme, ornaments of paper hands hung in circles and stars, an idea that was also from the first lady, Alexander said.

The China Room of the White House is decorated for the Christmas season.

In the State Dining Room, two large trees were decorated with framed photographs of former White House families on vacation, and various images from Biden's private archive that had never been seen publicly before.

"The first lady spent the last few weekends when she was at her home in Delaware looking at photo albums and choosing her favorites," Alexander said.

There are also photos of previous administrations, taken from the archives of the White House: the Kennedys, the Clintons, the Johnsons, the Reagans;

in the back of one of the trees was a small framed photograph of Donald and Melania Trump.

Though more subdued than in recent years, the exhibit is Biden's nod to tradition and continues with personal touches, even as the country feels the shock of change and loss due to the ravages of Covid-19, Alexander says.

The fireplace in the State Dining Room has six stockings for each of Biden's grandchildren, woven by the same Delaware craftsman who made the stockings for the Biden family home.

Fewer decorations for this Christmas at the White House

Yet the lack of the copious amount of décor of recent years is felt and seen.

There are more undecorated corners, less fake snow and flickering lights, the Christmas trees in Cross Hall don't brush against the ceiling, and they're not crowded together.

In the Green Room there are only two purple trees and a handful of purple orchid plants, one of Biden's favorite flowers.

A statement from the east wing says the first lady was "inspired by small acts of kindness and experiences that lifted our spirits this year and during the pandemic."

The yearly gingerbread White House, a 160-kilogram replica of the original, which pastry chef Susan Morrison and her team members took several weeks to build, was accompanied by other smaller bread "buildings." gingerbread and icing, including a hospital, fire station, police station, warehouse, and school.

A gingerbread replica of the White House located in the Dining Room on November 29, 2021. (Credit: ANDREW CABALLERO-REYNOLDS / AFP via Getty Images)

Elizondo added that the first lady also wanted this year's gingerbread White House to include something that had never been done before, so Morrison placed a large, illuminated wreath on top of the north portico.

President Biden and the first lady took a look at the decorations Sunday night after returning from their Thanksgiving weekend in Nantucket, Massachusetts.

Jill Biden placed the last (edible) figure in the installation: a little teacher made of gingerbread, leaning next to a stair railing made of angel hair paste painted with black food coloring.

Christmas decorations at the White House.

The entire exhibit, except for the table it rests on, can be eaten, Morrison said.

On Monday afternoon, Biden will personally thank the more than 100 volunteers who hung up the decorations over the past week.

Many of them arrived before Thanksgiving to begin their work;

By Sunday, it was "all set," Alexander said, as the finishing touches were applied.

Typically volunteers from across the country apply for decorating positions, but due to the pandemic, this year it was only locals from Washington, Alexander said. 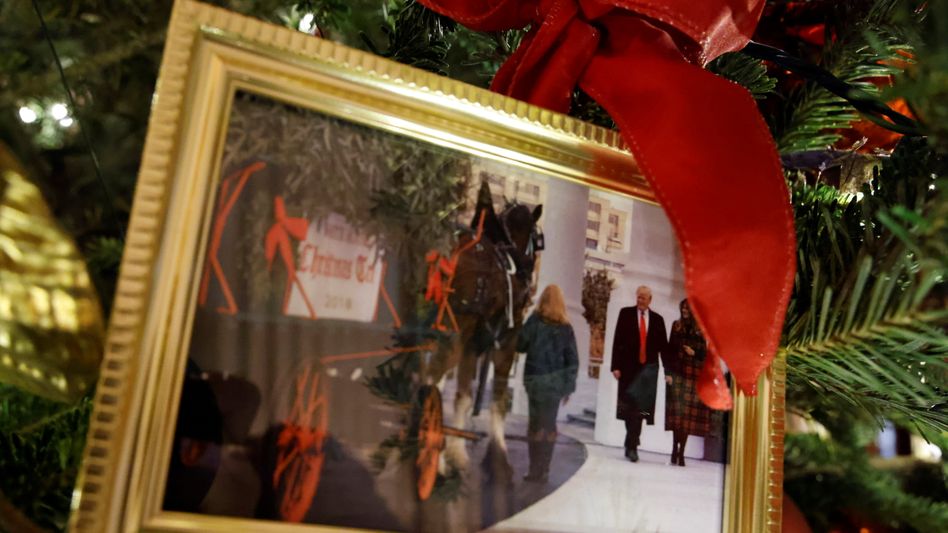 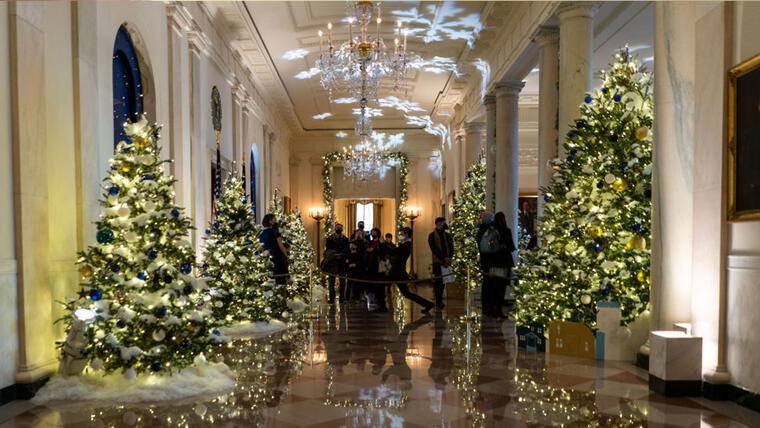 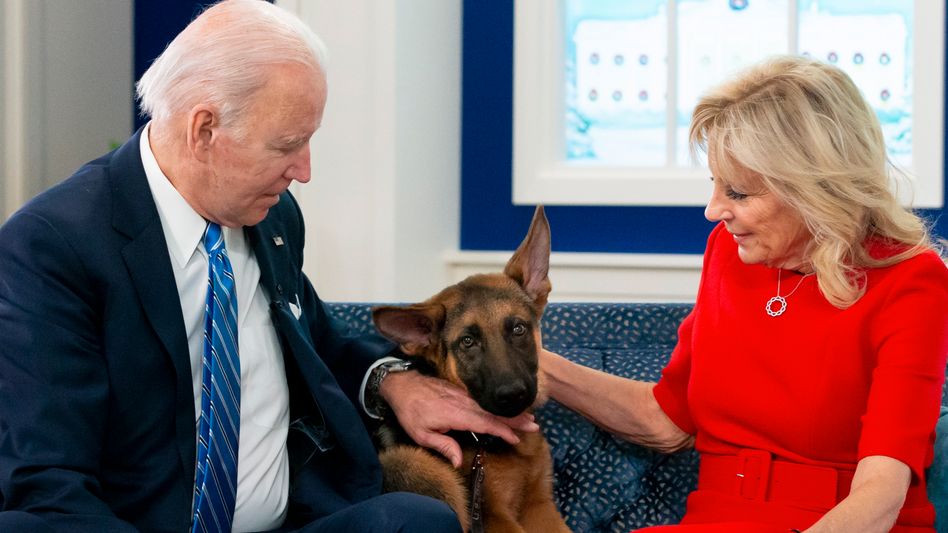 All ready for Christmas in the White House 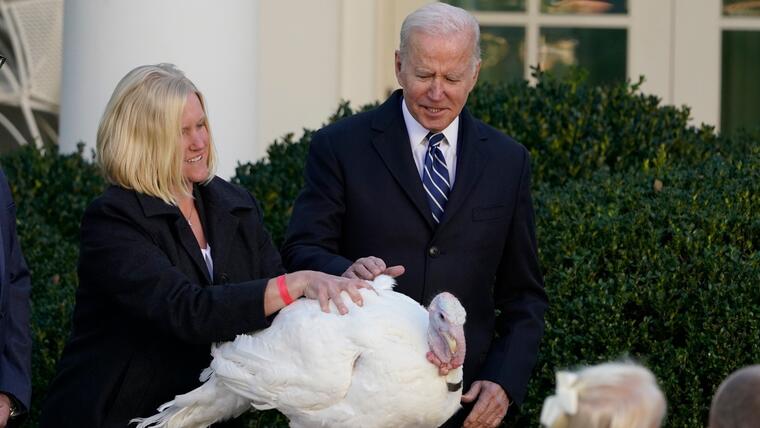 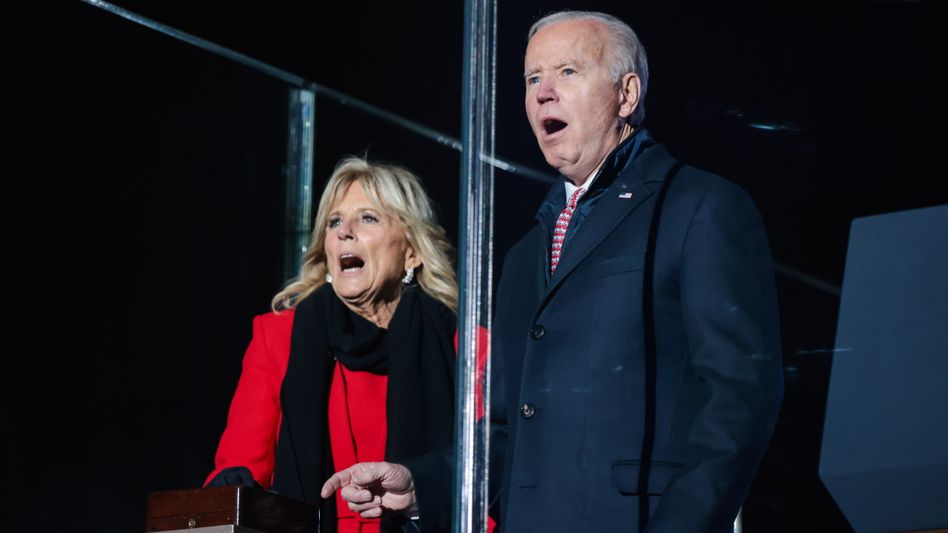