"The children now upstairs will give the parents strength to be healed": Rai and Hillel Oded, who were killed in an accident in Samaria, brought to rest | Israel today

The 6-year-old and the 3-year-old were buried in the cemetery in Rehovot • The grandfather: "My two pure grandchildren are lying before us now without doing anything wrong" 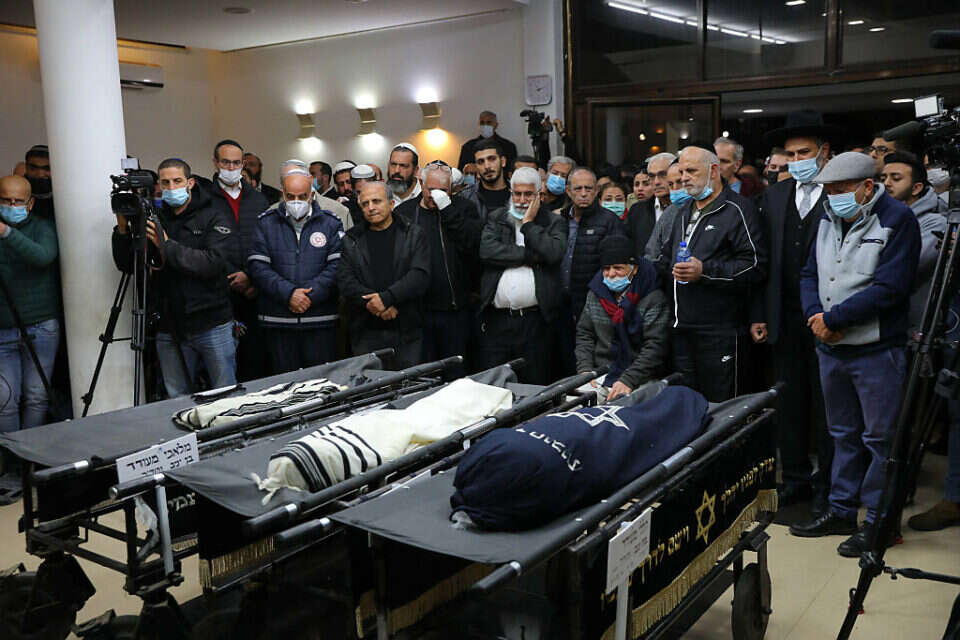 "The heart is torn" - the tragedy of the Moeded family:

Hundreds last night (Saturday) accompanied 6-year-old Hillel and 3-year-old son Rai to rest, after they were killed in a fatal car accident on Friday at Ofarim Junction.

The parents, Yaniv and Hoodia, are hospitalized at Beilinson and Sheba Hospitals, respectively.

The mother was admitted to the operating room during the funeral, the father was anesthetized and resuscitated.

The fetus that was removed from its mother's womb and did not survive the accident was buried as well.

He was given the name Malachi.

Grandpa Shiki Rauchberger and Grandma Esti, Hoodia's parents, said that the grandchildren stayed with them for two days to allow the parents to arrange the move and reorganization in the Baruchin settlement, to which they moved from Rehovot.

"My two innocent grandchildren are laid before us now without having done any harm," the grandfather said.

"Innocent children and the heart is torn who ended their lives on Saturday night. We will miss Tubush's sweet smile and Hallel's rolling laughter. We accept the decree of the name."

Funeral for the children of the Moeded family, Photo: Liron Moldoven

Funeral for the children of the Moeded family, Photo: Liron Moldoven

The scene of the accident in Samaria, Photo: Fire and Rescue

Rabbi Gideon Binyamin, rabbi of Nof Ayalon where the couple lived: "There is nothing to say, something that has no explanation. There is no understanding and hidden ways of Gd. The children are now up under the chair of honor and will give the parents strength to heal."

The funeral was attended by the heads of the Samaria Council, Yossi Dagan, as well as many members of Elon Moreh, where Father Yaniv studied, as well as educators from Beit Shemesh, where the father serves as an educator.

Many also came from the Shvut Rachel seminary where Hoodia studied.

Earlier, Ahuva and Rafi Moeded, Father Yaniv's parents, said at their home in Petah Tikva: "At 19:30 in the evening, a police officer came to our house and gave the bitter news. Every Friday they call before Shabbat to wish Shabbat Shalom, and this time he did not call. "And we did not understand. We thought maybe he was busy because he had just moved, in the end it turned out that he had an accident."

Ahuva added: "The heartache is up to the sky. How can it be digested?".

Halli's father and Tov Rai who were killed in a car accident have returned to full consciousness - Walla! news

Halli and Tov Rai who were killed in an accident in Binyamin will be laid to rest in the Rehovot cemetery - Walla! news

"The children now upstairs will give the parents strength to be healed": Rai and Hillel Oded, who were killed in an accident in Samaria, brought to rest | Israel today

The tragic accident in Benjamin: Deterioration in the condition of the father whose children were killed Israel today

The accident on Road 465 in Binyamin: The father of the family regained full consciousness and his condition improved Israel today

"I cut off the emotion": the paramedic who treated the call - the uncle of the children killed | Israel today Administrative Development invites graduates of the first technical institutes to specify the desires of their appointment
2022-01-06T11:14:09.145Z

Palestinian Prisoners Affairs warns of the deterioration of the health status of the two prisoners, Raddad and Matan
2022-01-06T11:13:38.413Z

Xu Yingwei was criticized by Lin Zheng for being isolated for attending the party and criticizing the hot search host
2022-01-06T11:08:23.218Z

Maintenance work stopped at Tel Tamer power plant due to the attacks of the Turkish occupation and its mercenaries
2022-01-06T11:07:44.877Z

10 Officials went to a banquet under the epidemic, Lam Cheng: especially disappointed with Xu Yingwei. Officials are responsible for their actions
2022-01-06T11:02:03.593Z