30,000m³ of waste would have been identified by firefighters against 1000m³ authorized. Pollution levels comparable to those in Beijing: in Saint-Chamas, a small town in Provence, the fire, for nearly two weeks, of thousands of cubic meters of waste from a private sorting center worries the inhabitants: “ Qu is burning? What are we breathing? "" We feel a lot of anger, it's been burning since Boxing Day anyway! », Summarizes Nathalie Galand, referent of the France nature environment

Pollution levels comparable to those in Beijing: in Saint-Chamas, a small town in Provence, the fire, for nearly two weeks, of thousands of cubic meters of waste from a private sorting center worries the inhabitants: “

What are we breathing?

We feel a lot of anger, it's been burning since Boxing Day anyway!

», Summarizes Nathalie Galand, referent of the France nature environment association (FNE) for this town of 8,000 inhabitants.

On the edge of the Etang de Berre, some fifty kilometers from Marseille, Saint-Chamas, with its small fishing port and its nature reserve, had hitherto felt rather "

" by pollution, despite its proximity to the enormous industrial-port area of ​​Fos-sur-Mer, one of the largest in France.

Until the fire - which is the subject of a police investigation - of the company Recyclage Concept 13, which stored waste brought by industrialists in order to sort it and then resell it to recycling companies.

Twelve days after the start of the fire, the site looks like a "

", in the words of Nathalie Galand.

The 3,200 m2 storage warehouse was completely destroyed and the metal roof collapsed on a mountain of waste six meters high.

In a cloud of unbreathable smoke, the firefighters fight against this fire "

Thursday, they hoped to come to the end of the fire, "

by the end of next week

" according to Lieutenant-Colonel Pierre Bisone.

The prefecture forced the company to have the building demolished so that the firefighters could finally have access to all the waste.

At the height of the fire, pollution reached 800 micrograms of fine particles per cubic meter of air at certain times of the day when the daily alert threshold to preserve health was ten times lower, levels comparable to those experienced by Beijing during pollution peaks.

The mayor of Saint-Chamas Didier Khelfa took the decision on Tuesday to ban outdoor sport and asked school directors to prevent children from going out for recess.

Read alsoToxic waste in Wittelsheim, the urgent need for a solution

The tired face, he does not take off: "

It is a disaster beyond measure, if a person falls ill, I will not get over it

". The city councilor had alerted the authorities as soon as the company Recyclage concept 13 was installed in March 2021: "

The law must be changed: this type of company can be set up simply with a declaration on the internet, they have taken over an abandoned warehouse. , on land without a fire hydrant ...

From April, he multiplies the calls to the services of the State, panicked by the amount of waste that he sees accumulating on the site.

"In September, the state services noted"

manifest irregularities in the environmental code

In mid-December, the prefecture demanded that the company reduce the volume of waste before the end of the year.

In a car which serves as her office in front of the burning warehouse, the sales manager of Recyclage Concept 13 fulminates: "

Non-compliance of the installation

You see pollution there, but that [the waste] was our income!

We are not up to standards, but we assume, we do not shirk our responsibilities

," she says, pointing to a backhoe loader from the company which clears the waste piled up in front of the building. According to her, when Recyclage Concept 13 took over the activity with another company in March, “

there was already too much waste

”. Recycling Concept 13 had recruited a research firm to "

bring itself into compliance

had filed an authorization request for a greater

Read alsoEnergy, water, waste: operators of vital importance are organizing themselves against the Omicron variant

It is in non-compliance

", asserts the sub-prefect of Istres Régis Passerieux to AFP, also assuring that "

there has been no request filed with the administration

Today, the inhabitants wonder about the nature of the burnt garbage.

The prefecture, however, promises that they will be analyzed "

The inhabitants also say they are vigilant: Nathalie Galand will recover sensors so that citizens can take their air samples themselves in the coming weeks.

Soil and water analyzes will also be carried out. In numbers.. How much does environmental pollution cost the economies of the countries of the Middle East and North Africa? A year after the tar disaster: This is what the shores of Israel look like now - Walla! Tourism 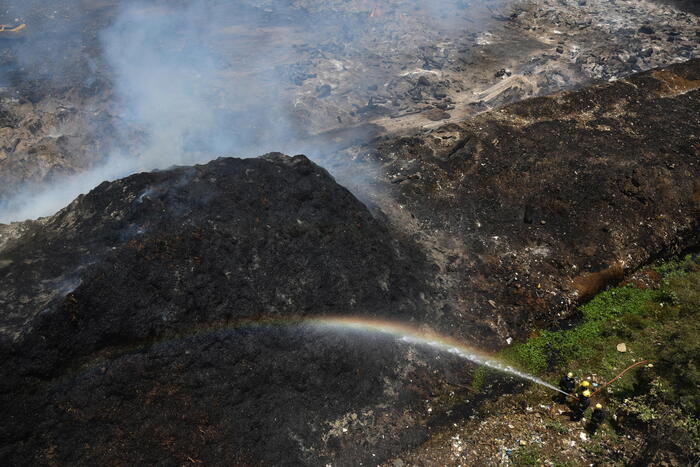