Vaccination by infection dynamics matter? Virologist Brinkmann irritates Illner - and then explains Created: 01/15/2022 06:06 The talk show on "Maybrit Illner" (ZDF). © ZDF (Screenshot) Not much was missing and Maybrit Illner would be sitting alone in the ZDF studio in Berlin. Most of the guests let themselves be connected via monitor. That fit the topic: The highly infectious virus variant Omi 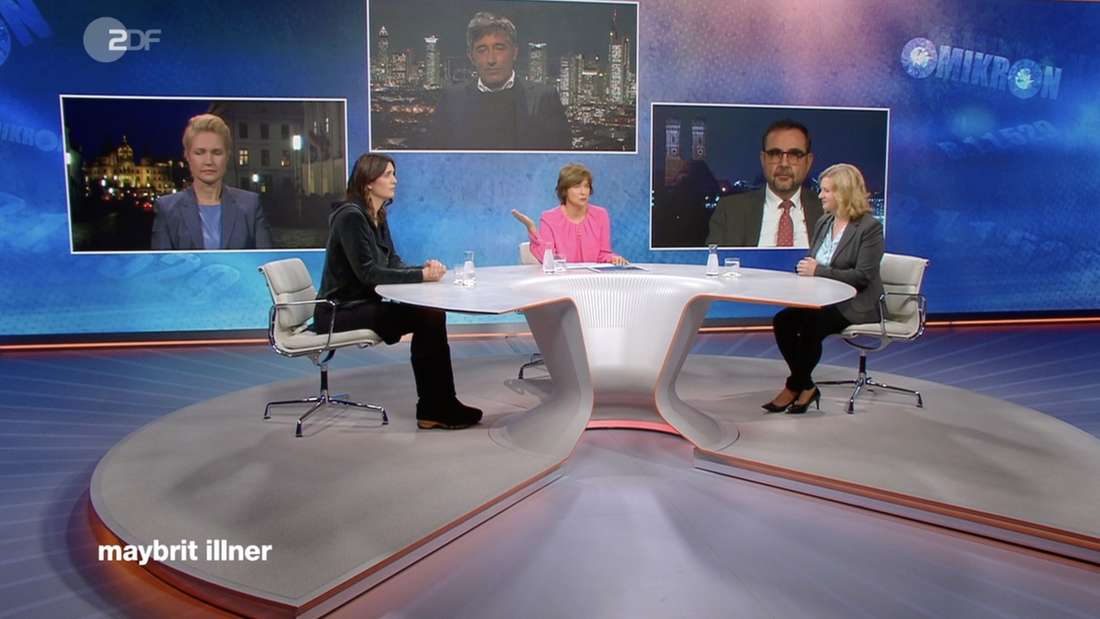 Not much was missing and Maybrit Illner would be sitting alone in the ZDF studio in Berlin.

Most of the guests let themselves be connected via monitor.

That fit the topic: The highly infectious virus variant Omicron.

Berlin – Undoubtedly the most diligent talk show guest, Health Minister Karl Lauterbach, is not in the round with Maybrit Illner, but gets his fat off properly. Together with Olaf Scholz, he is in the line of fire – topic: compulsory vaccination. Moderator Illner gives the steep template and asks the group: “Announce compulsory vaccination, but then have no idea how to implement it – was Olaf Scholz particularly clever?”. And alludes to the pending proposal for implementation of the planned vote in mid-March.

Lauterbach's Bavarian ministerial colleague at state level, Klaus Holetschek from the CSU, does not miss the opportunity: "I am in favor of this vaccination requirement," he admits to the camera at first, albeit with the restriction of a time limit - but then he lashes out: "That Topic must be a matter for the boss and the chancellor has to deliver now!” and demands a bill “with a view to the future” from the “leadership in Berlin”.

"Maybrit Illner" - these guests discussed with:

Omikron has created a new problem in the corona sky: Politicians are no longer concerned with the risk of severe courses and the overloading of the health system - the failure due to quarantine measures is the new problem in dealing with the pandemic. The "critical infrastructure", medical care, administration, municipal utilities, but also education, regulatory offices, jurisdiction and police order through to the food supply are currently being paralyzed in places. Prof. Melanie Brinkmann made it clear that boosters protect against severe courses in most cases, but not against infection: "The infection dynamics do not care about the vaccination."

The virologist admits: "The quarantine is a burden", advocates quick "free testing", but also urges care, since the test capacities are already overloaded.

Brinkmann campaigned again in a dramatic appeal for vaccination.

It's a really serious illness.

The narrative - that "nature is better than vaccination is fundamentally wrong".

It is often "cruel".

People forgot that research "through vaccines saved many lives."

100 years ago one in ten people died from smallpox.

Science would have “got it under control” through vaccination.

But Holetschek also gets his fat off.

Illner questions the announced turn to more pandemic looseness in Bavaria and quotes Markus Söder: "Corona is not the end of the world".

Holetschek explains the new course due to Omikron's "significantly lower severity of the disease": "We're now taking the time to balance that out.".

Schwesig grumbles indignantly from her monitor: "I'm amazed that Bayern is doing this!

Patients were just flown out there a short time ago!” Illner, recalling the past Prime Ministers' Conference, is also of the opinion: “You are thwarting a joint decision!”.

Schwesig announces a crisis team that she has set up in her state to be prepared for the worst case and does not rule out that up to a quarter of the population could soon be in quarantine.

When it comes to compulsory vaccination, the journalist Eva Quadbeck is also against the Minister of Health: "Lauterbach said on January 5 that he would submit a proposal." Nothing has happened so far, that is his "very big contradiction", according to Quadbeck and is Lauterbach should have put himself at the "head of the vaccination movement", through his reluctance he "lost trust." The political journalist is also visibly dissatisfied with the current situation in terms of digitization and the personnel situation - too little and too badly paid: "Then you have said: We have to change something and then nothing changed!” Brinkmann agrees, because attempts have been made since 2003 to bring the healthcare system into an electronic form. The “urgency” has become even clearer as a result of the pandemic.

Schwesig defends the missing application for compulsory vaccination: desire for debate is correct

Prime Minister Manuela Schwesig can hardly stay on her chair with so much criticism of her party comrades. She initially jumps into the breach for Lauterbach and first makes it clear: “He is a really good health minister! He can justify everything scientifically!”

Schwesig justified the lack of an application for the implementation of compulsory vaccination with the possibility of a parliamentary debate. A suggestion by Lauterbach would have "outshone" a debate. The Bundestag is also "sensitive". You can't first say: "Debate!" And then: "1,2,3... - that's how it's done." Quadbeck makes it clear that the traffic light coalition debate is useful - not the other way around - because it alone "does not bring a majority for compulsory vaccination “ came about and need the faction-open debate to enforce. The only thing that remains silent is an iron smile.

The science journalist Ranga Yogeshwar, who is connected from Frankfurt, hits the nail on the head from the other side and hands out school grades "In terms of communication", the government deserves a "four or five".

On the one hand, Yogeshwar criticizes opaque to incorrect data lists - caused by the delayed digitization of the offices - which would make people suspicious.

On the other hand, the split caused by a polarizing debate about compulsory vaccination.

Yogeshwar: "We have allowed camps to form where we speak of anti-vaccination" and thereby promoted "defiant reaction" and "hardening".

Conclusion of the "Maybrit Illner" talk

It is interesting that in view of climate change, the foreign policy situation at the European borders or the development of China, the talk shows are almost exclusively devoted to this one topic: Corona and its national effects.

With “Maybrit Illner” alone, Yogeshwar dared to think outside the box and found that omicron originated in largely vaccinated Africa and suggested a look at the international situation and responsibility.

But the proposal stayed the same.