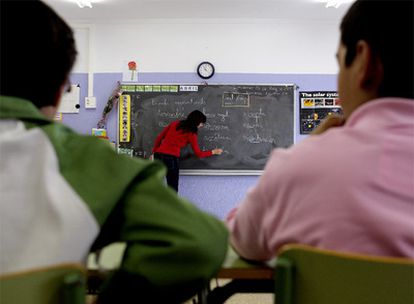 Catalan class in a school, in a file image.

The High Court of Justice of Catalonia (TSJC) has declared this Friday the finality of the ruling that requires 25% of Spanish to be taught in Catalan classrooms.

As established by law, the Generalitat now has a period of two months to execute it voluntarily.

The clock will start once the Department of Education has confirmed that it has received the resolution, for which it has a period of 10 days.

The Minister of Education Josep Gonzàlez-Cambray has described the decision as "an attempt to prosecute the Catalan school model".

In principle, Education does not plan to apply the measure during this voluntary period and would wait for the order of forced execution to arrive, which must be requested from the central government because it was the plaintiff.

At the end of November, the Supreme Court inadmissible the last appeal of the Catalan Government against the decision of the TSJC of December 16, 2020 that set that minimum of Castilian for the Catalan educational system in its entirety.

The decision provoked protests from the Generalitat and from a large part of the educational community in Catalonia, which considers that Catalan should be the only vehicular language at school.

About two decades ago the sentences to apply this 25% of Spanish are falling by the dropper, but they only affected the student who denounced it.

What is relevant about this 2020 ruling is that, for the first time, the measure was extended to the entire system.

The Minister of Education Josep Gonzàlez-Cambray has not been surprised by the resolution.

“We already knew that it would happen because it is part of the procedure”, he commented, but he has once again rejected this type of sentence that affects the linguistic immersion model.

"We are facing an attempt to prosecute the Catalan school model, a model that has been successful, of social cohesion and of equal opportunities for decades."

Asked if Education will apply the sentence, Cambray has assured that its normative reference is the Catalan law.

“We will comply with the provisions of the Catalan Education Law: that at the end of the compulsory stage, 4th ESO, all students achieve the skills in both Spanish and Catalan.

Learning languages ​​is not about percentages, it's about pedagogy”, he added.

but already at the end of November he assured that he had no intention of requesting his execution, because that corresponds to the courts.

Then, any association or natural person could request the execution, but in that case, the procedure would not be automatic, but rather the court must assess the legitimacy of the person or entity that claims its application.

The Assembly for a Bilingual School - entity that promotes the demands of this 25% in the classrooms - has already been willing to request it.

The beginning of this judicial mess dates back to 2015, when the Ministry of Education, then in the hands of José Ignacio Wert, sued the Generalitat for "inactivity" when guaranteeing the "right of students to receive the teachings in both official languages” in the autonomous communities that have more than one, although no percentage was claimed. In December 2020, the TSJC, with the aim of "correcting the current situation contrary to the law", set this 25%, considering that it is the "minimum below which it cannot be understood that the vehicular use of the language reaches the condition normal within the system. Then, the Generalitat filed an appeal before the Supreme Court, which was rejected last November.

The president of the Generalitat, Pere Aragonès, has rejected the notification of the TSJC, which closes the battle for the use of Catalan in schools, has sparked a cascade of political reactions. “Catalan is not touched and the Catalan school, neither. Enough of attacks on the language, education and the entire country. We will not allow social cohesion to be put at risk. We are working on the regulatory deployment to reaffirm the Catalan school model. Enough politicizing education”, he reacted on Twitter. Sources close to Aragonès have added that their objective is to squeeze the Catalan Education Law to try to avoid strict compliance with the sentence in the sense that it is each school that sets its linguistic quotas based on the social environment in which they are. But nevertheless,it is not clear from these sources how they will do this without flagrant disobedience.

The majority educational union, Ustec, has urged the Department of Education to ignore the sentence, which they brand as "ideological" and that "does not correspond to any pedagogical criteria."

Its spokesperson, Iolanda Segura, recalled that the academic results guarantee a good knowledge of the two official languages.

Education already saw the shelving of the judicial journey coming for 25%. To compensate for this, Minister Cambray recalled this Friday that a language plan has been rolled out to find out the situation of Catalan in the classroom, since some centers -mainly located in the most populous municipalities in the Barcelona metropolitan area- no longer apply strictly the linguistic immersion model due to the high percentage of immigrant or Spanish-speaking population. In fact, a report by the Educational System Evaluation Council indicated a decline in the use of Catalan by students and teachers. In this sense, Cambray has announced that a new regulatory framework is being prepared "to update the linguistic model based on the current model of educational innovation".

A month ago, Education also announced the hiring of reinforcement teachers for the classrooms affected by the individual sentences of 25% -currently 46-, who will focus on attention in Spanish. "The sentences affect the normality of the centers and so that the children are less affected, we put more resources," they point out from Education. This formula makes it possible to abide by the sentences, but also to respond to the demands of many other families who defend the immersion model and complain that it should be changed at the request of a minority. The Department, at the moment, does not specify how many of these teachers will be hired and when they will be incorporated.

Likewise, at the beginning of January, the Government published a resolution to “legally protect” officials in the education sector. Specifically, it is about making legal advice and defense services available to teachers in case they need it, since on some occasions the directorates have become the focus of complaints and have been designated as responsible for executing the sentences. "What we want is to protect by all means the people who work in the schools against the illegitimate attacks that they may suffer", justified then the spokeswoman for the Government, Patrícia Plaja.

The issue of the vehicular language in schools in Catalonia has caused a harsh political confrontation in recent months. The last episode of great intensity was when, in December, the court ruled that in a school in Canet de Mar the quota of 25% of Spanish in the class of a student whose parents had requested it be applied. Then a protest movement was generated and the parents of the student, as well as various associations in favor of school bilingualism, denounced harassment and pressure from those opposed to it.

Before knowing today's announcement from the TSJC, Ciudadanos has presented a motion in Parliament to urge the Government to abide by the sentence, and to take "the necessary steps to apply it in all educational centers in the shortest possible time". In the text, which has been presented by the deputy Nacho Martín Blanco and which will be voted on in the plenary session next week, they ask that "the Government's stubborn inclination to disregard the judicial rulings that protect the right of all Catalan students to receive at least 25% of teaching hours in Spanish”.

The president of the Assembly for a Bilingual School, Ana Losada, has expressed her fear that the Government will present an appeal for reconsideration of the TSJC resolution, but has indicated that it seems "perfect" that the court has declared the sentence final. He has also indicated that, if the Generalitat does not apply the ruling and the central government "does not force it to do so", then his association will file "a class action lawsuit before the TSJC to ensure that it is applied and for which we have the support of 300 families”.

The Parliament of Catalonia has already joined the voices that call for non-compliance with the sentence.

The three pro-independence groups in the Parliament (ERC, Junts and the CUP) and En Comú Podem added their votes on December 16 to reject a PP proposal that asked for the judicial mandate of 25% of hours to be applied in the next academic year in Spanish.

However, in centers such as the one in Canet de Mar, the judicial resolution that affected him has begun to be fulfilled. 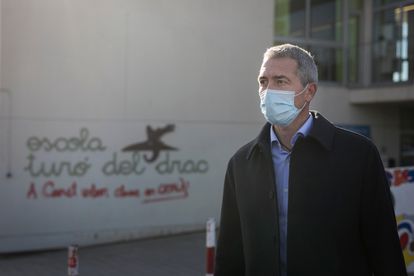 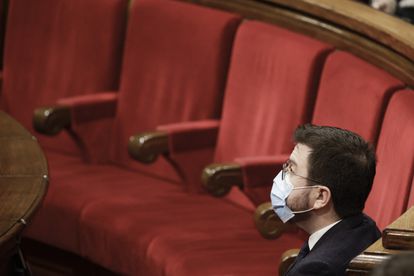 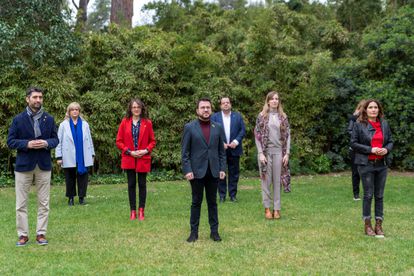 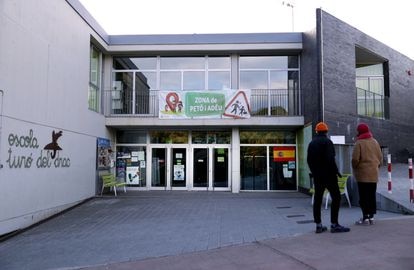 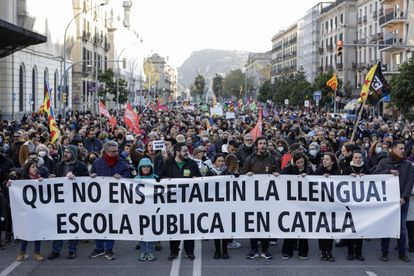 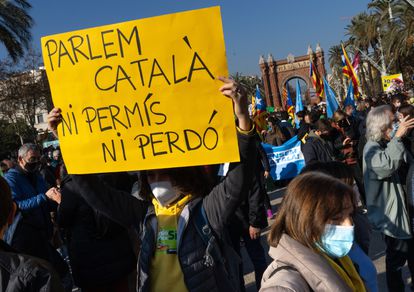 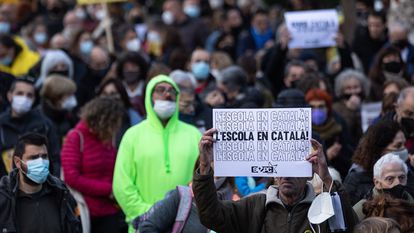 The five magistrates who mark (reluctantly) the public agenda in Catalonia 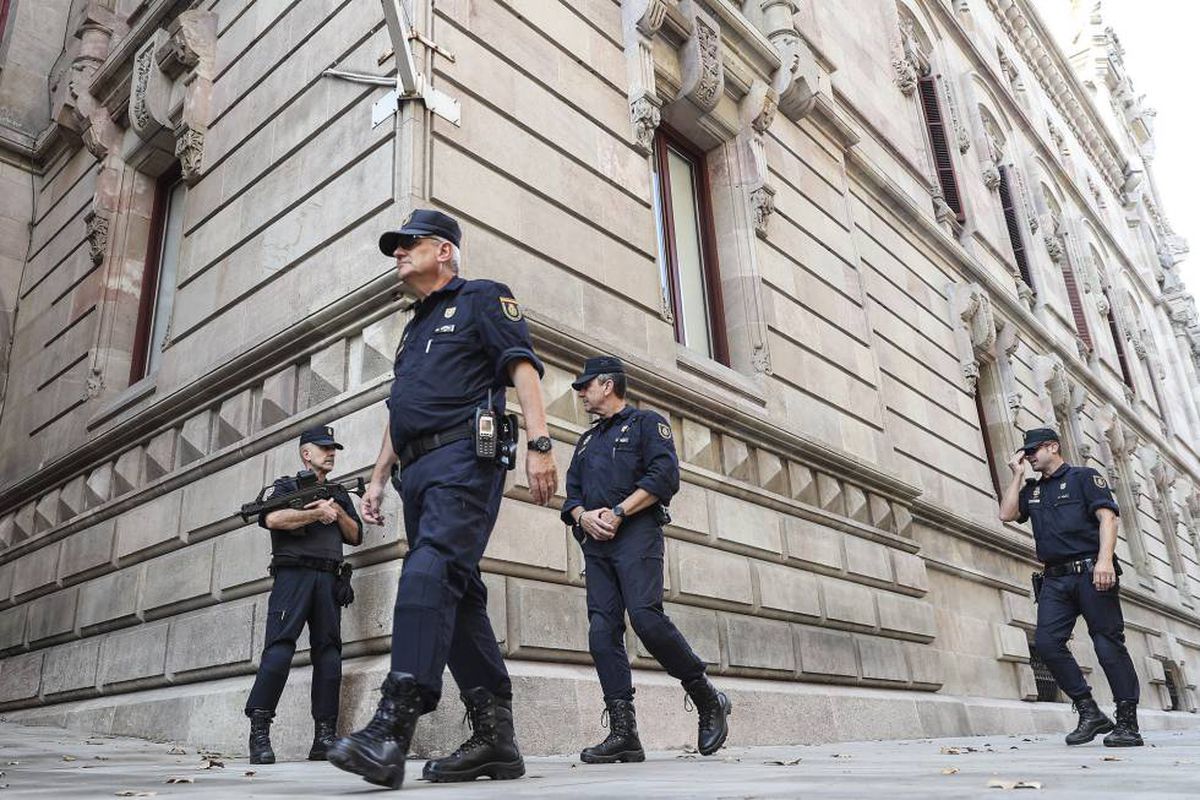