Preparations for G7 summit: stress test for the police

Preparations for G7 summit: stress test for the police Created: 01/25/2022, 11:00 am By: Andreas Seiler Potential for conflict: As at the premiere in 2015, protests are again expected at the G7 summit in Elmau. This picture was taken in Garmisch-Partenkirchen. ©epd The police are preparing for the G7 summit, which will take place in Schloss Elmau at the end of June. A feat for the officials. T Preparations for G7 summit: stress test for the police

Potential for conflict: As at the premiere in 2015, protests are again expected at the G7 summit in Elmau.

This picture was taken in Garmisch-Partenkirchen.

The police are preparing for the G7 summit, which will take place in Schloss Elmau at the end of June.

A feat for the officials.

The plans from 2015 serve as the basis, when the heads of state of the seven largest western industrial nations met in the luxury hotel in the Isar valley.

But the world has changed since then - and with it the security situation.

District – When Federal Chancellor Olaf Scholz (SPD) receives the heads of government and state of the leading Western economic powers at Schloss Elmau from June 26 to 28 this year, it will be really expensive for the taxpayer.

The Bavarian Ministry of the Interior calculates costs of around 166 million euros for the 2022 G7 summit.

The lion's share, around 147 million euros, is earmarked for the police.

Concrete team strengths are not yet known.

Not only Bavarian state police officers, but also colleagues from the federal police, the other federal states and from neighboring Austria.

Major event in the midst of the corona pandemic

The major event is a huge challenge for the law enforcement officers because a thick bundle of demanding tasks has to be mastered - and that in the midst of the corona pandemic. It's not just about protecting the world's most powerful and their delegations. Traffic also needs to be regulated, the expected protests kept under control, and the security of citizens and their property ensured. The linchpin is the newly founded G7 summit planning staff, which began work in December and is currently still based in Munich. The two heads of this police control center, Werner Sika and Dominik Fischer, were recently guests of the Garmisch-Partenkirchen municipal council to give an initial insight into the preparations.

The 2015 concept, with the help of which the summit meeting was extremely peaceful, serves as a basis.

"That's the only way we can get this sorted out," reported Sika.

After all, this time the lead time is extremely short at five months.

But the old plans cannot simply be adopted one-to-one.

Because many basic conditions have changed.

Institutions that are responsible for the so-called critical infrastructure - this includes, for example, the electricity and water supply - must therefore be given intensive advice.

And then there is still a big question mark over the assessment of the demonstrations.

So far, three permanent events (each from June 25th to 28th) in Garmisch-Partenkirchen, Mittenwald and Klais and a large rally in Munich (June 25th) with 20,000 expected participants have been registered.

The police are not only counting on opponents of the summit, but also on representatives of current trends, which makes things even more difficult.

Traffic control is a big issue.

In the hot phase (from June 20th), the police want to try to fan out the traffic flows at the borders of the Free State, as it is called in technical jargon.

In the district, drivers must then expect checkpoints and closures.

"Our goal is to keep the restrictions as low as possible," said Fischer.

And the population should be taken along and informed as best as possible, for example with the help of a citizen hotline.

However, the police also have to contend with logistical challenges.

So accommodation and bases have to be created on a large scale - and that in the middle of the holiday season and in a passion year.

The Olympic ski stadium, the ice sports center and the congress center in Garmisch-Partenkirchen are under discussion as operations centres.

Addressing the police representative, she said: "I know we can count on you."

However, some tangible concerns could also be heard from the ranks of the municipal council: Daniel Schimmer (free voters), local chairman of the hotel and restaurant association, recalled, for example, impairments in tourism, Markus Baur (CSU) of the difficulties for school operations, Michael Simon ( SPD) to the loss of sales for the retail trade and Alexandra Roos-Teitscheid to the negative external impact.

Elmau will be presented as an "island of happiness" during the summit - and Garmisch-Partenkirchen as the place of the demos.

"I dislike that," said the Green politician critically. 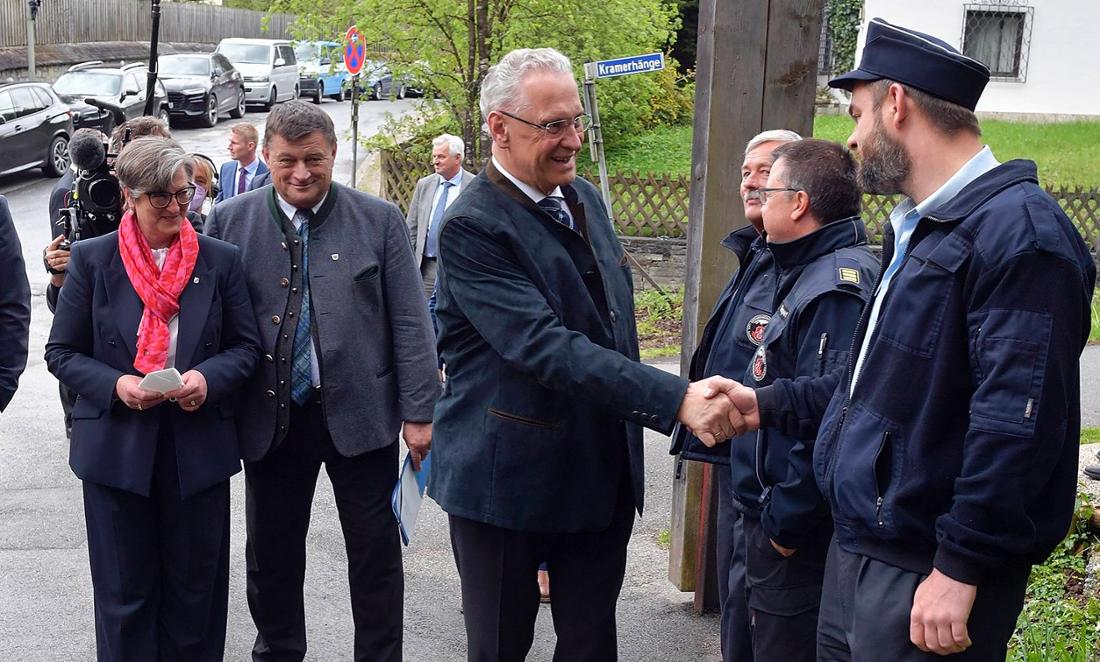 G7 summit in Elmau: Great fear from locals - Herrmann with a clear message For the G7 summit: Bavarian police sets up a citizens' hotline and email address for inquiries