The new Galician baron of the PP dominates the springs of the Administration, but his electoral pull is unknown 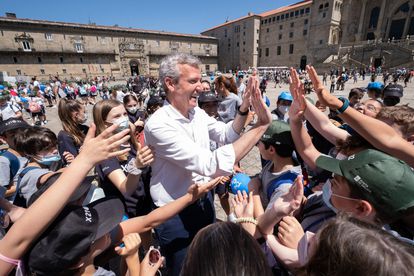 The Popular Party already has a new baron in Galicia.

Alfonso Rueda Valenzuela (Pontevedra, 53 years old) will take office this Saturday as the sixth president of the Xunta and in a week he will be officially proclaimed leader of the popular in an essential territory for the party.

Galicia, birthplace of the founder Manuel Fraga, is a fortress in which the conservatives have resisted for the last 13 years with an absolute majority, weathering several crises, the Gürtel or the bites of Ciudadanos first and the extreme right later.

Rueda, a municipal official and a high-ranking official in the regional administration since Fraga's time, has remained at Feijóo's side for more than 16 years, both in the government and in the party.

All this without ceasing to be unknown even among many Galicians.

Rueda has been in politics since he was very young.

He began putting chairs in meetings and became president of New Generations in Pontevedra.

After graduating in Law, being a banking commercial and taking an exam, he worked as a local official and then as a municipal secretary, currently in special services and with a position in the City Council of Marín (Pontevedra).

He became Feijóo's right-hand man in 2006 thanks to a political veteran who noticed him: Xesús Palmou, former councilor of the Xunta with Fraga and former general secretary of the popular Galicians.

Rueda was his chief of staff and his general director of Local Administration between 2000 and 2005. And it was Palmou who gave Feijóo his name when Fraga's successor and now leader of the PP was looking for a general secretary for the party.

Palmou highlights his "extraordinary preparation" in the Administration, his "dedication" and his "responsibility".

All those consulted who have worked with Rueda emphasize that he moves like no one else through the intricacies of bureaucracy.

“He has a very technical profile, he is not a populist”, affirms the writer and political analyst Rodrigo Cota.

Pontevedra like Rueda, Cota has known the new Galician president for many years.

He assures that he is “even more discreet” than his predecessor and, “like Feijóo, he is not very conditioned by ideology”: “he is rather practical;

he knows what works and what doesn't work”.

When he joined his destiny to that of Feijóo, Rueda took charge of the uncomfortable matters, those that entail the greatest risk for the image of a politician, both towards his own and towards his opponents.

He was the one who gave voice and face to the aggressive campaign with which the now national leader of the PP reconquered the Xunta in 2009. With the economic crisis drowning the Galicians, Rueda baptized the austere professor of Economics as "sultan of Monte Pío". Emilio Pérez Touriño, then socialist president in coalition with the BNG.

He repeated that Touriño was “addicted to luxury” and made a scandal out of buying an armored Audi like the one Fraga was already using as an official car.

Socialists and nationalists do not forget that campaign.

“Then she made it clear what her ethical standards are,” the BNG leader, Ana Pontón, snapped at her inauguration this week, referring to that time.

Rueda also demonstrated then along with Rosa Díez, from UPyD, and some groups to reproach PSOE and BNG for measures to promote Galician that the PP had supported with Fraga as president.

"It was a strategic issue at a certain time," says Cota.

"His position on the Galician is not that now and it was not then."

Those messages permeated and Feijóo reached the presidency of the Xunta.

As general secretary of the Galician PP, Rueda was in charge of putting the party at the service of Feijóo.

The position earned him internal enmities and reaped some noisy failure, such as when he unsuccessfully tried to dislodge the Baltar family from the leadership of the PP in Ourense.

In 2016, after losing much of his municipal power, Feijóo dismissed Rueda and placed

to Miguel Tellado, current head of Organization of the national leadership of the PP.

He took stripes from the now president of the Xunta and put him at the head of the Pontevedra PP to try to repair the electoral fall of the conservatives in this province.

Mayors of the area assure that when the crisis broke out in the national PP that has put the helm of the Xunta in the hands of Rueda by surprise, he was focused on the Pontevedra city councils to try to show off in the municipal elections of 2023.

Alfonso Rueda, last Tuesday in the Obradoiro surrounded by pilgrim children after his investiture speech, in an image broadcast by him on Twitter.

In his 13 years as counselor and vice president of the Presidency and Justice, Rueda has been in charge of matters with little flash.

The degree of knowledge of him among Galicians is low, according to polls, and he has never been an electoral poster.

The pull of him is, therefore, unknown and the communication teams of the Xunta begin these days to color the image of him.

Married to Marta Coloret Lamas and with two teenage daughters, a biker and an athlete, the politician has released a photo hugging his mother for Mother's Day and, after his investiture speech, he was photographed in the Obradoiro in a casual attitude with a crowd of pilgrim children.

“Rueda now has to project his image, transmit everything he does to society.

He must cultivate proximity so that his image as a trained and capable person reaches the public”, Palmou recommends, citing the example of the evolution of Feijóo, who “gained a lot in image”.

The relatives of the new Galician baron of the PP assure that behind the coldness of the manager hides a "pleasant" and close treatment person.

“I am convinced that he will mark his own profile.

It cannot be a continuation of Feijóo, it would be finished”, says Cota.

His father, Rajoy's right-hand man in the eighties

Alfonso Rueda belongs on his mother's and father's side to a lineage linked to politics and business.

His father, José Antonio Rueda Crespo, who died in 2012, was vice president of the Pontevedra Provincial Council in the eighties when this institution was chaired by a young man named Mariano Rajoy who had not yet turned 30.

The father of the new Galician president, who was not a member of the Popular Alliance but of the Galician Coalition, a Galician center formation, then experienced first-hand an internal schism that ended the government of the conservative Xerardo Fernández Albor and led to his ceasing to be Rajoy's right hand.

In that rupture of the Galician center-right, Rueda Sr. aligned himself on the opposite side to Rajoy and Fraga and his political career in the front line ended.

the president of the association of property developers of the province of Pontevedra Javier Garrido;

and the former Minister of Agriculture of the Xunta Fernando Garrido.

His great-uncle Ramón de Valenzuela was a renowned Galician who was retaliated against by the Francoists. 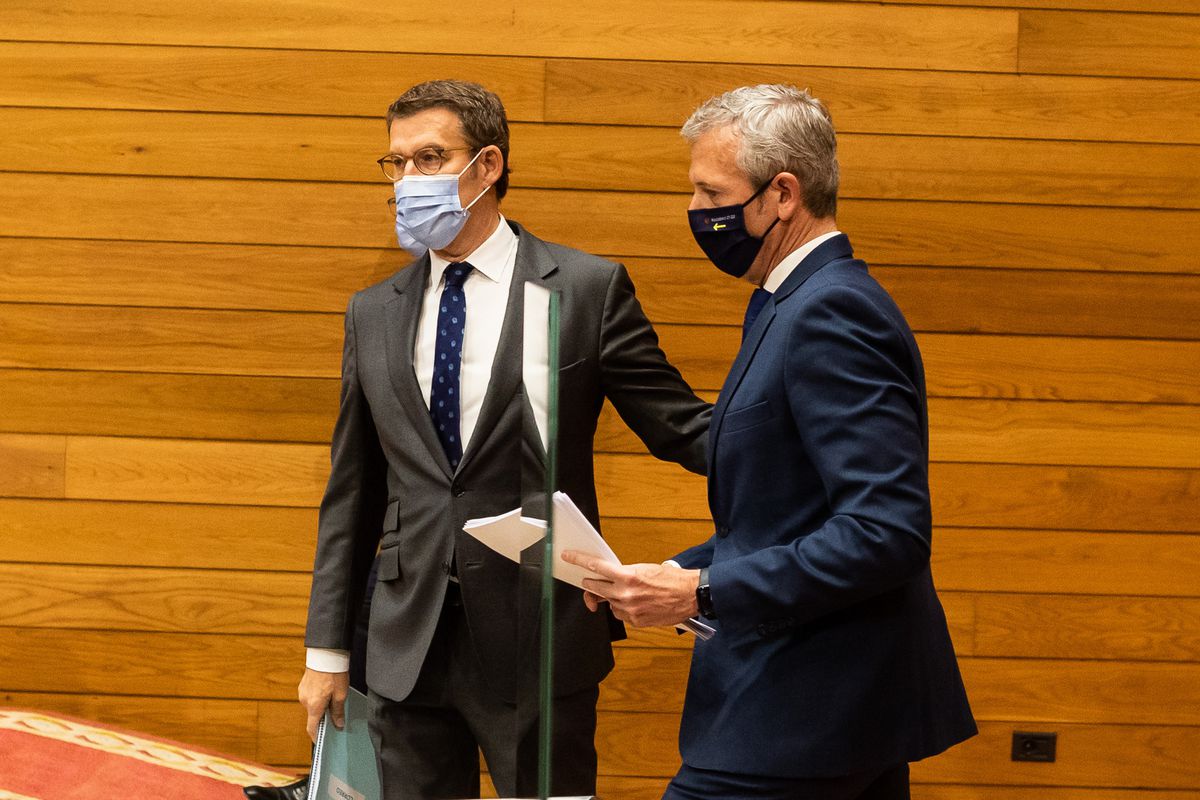 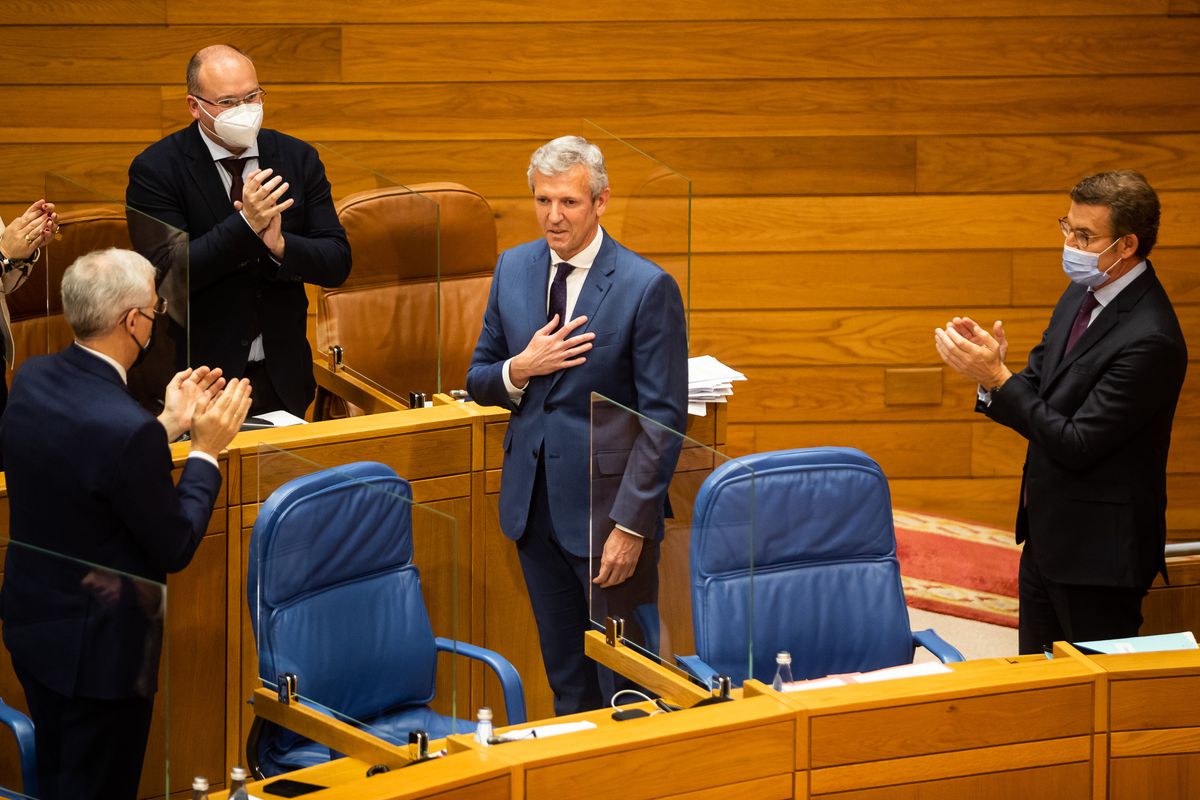 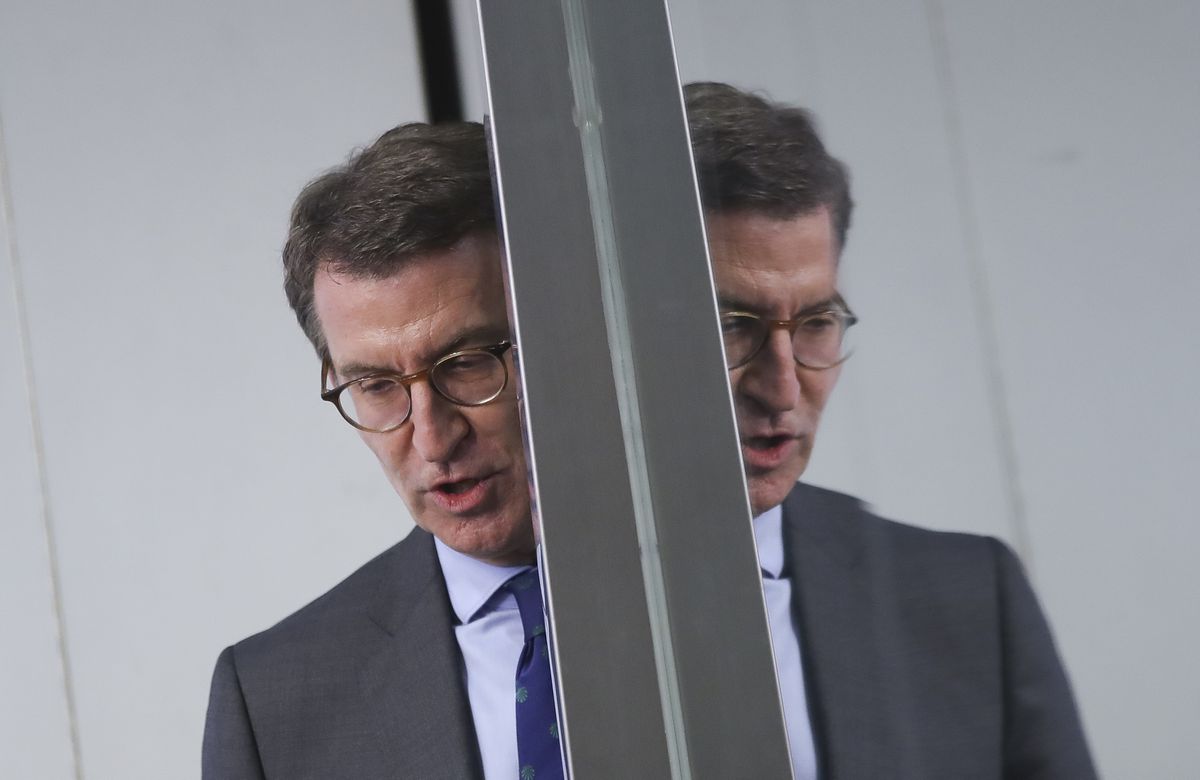 Feijóo, out of his comfort zone when landing in national politics 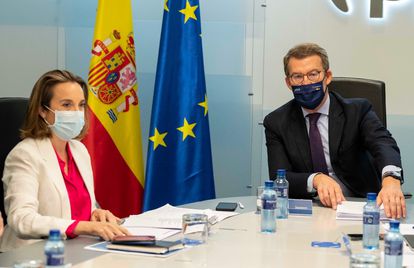 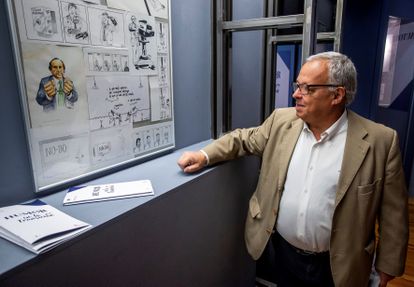 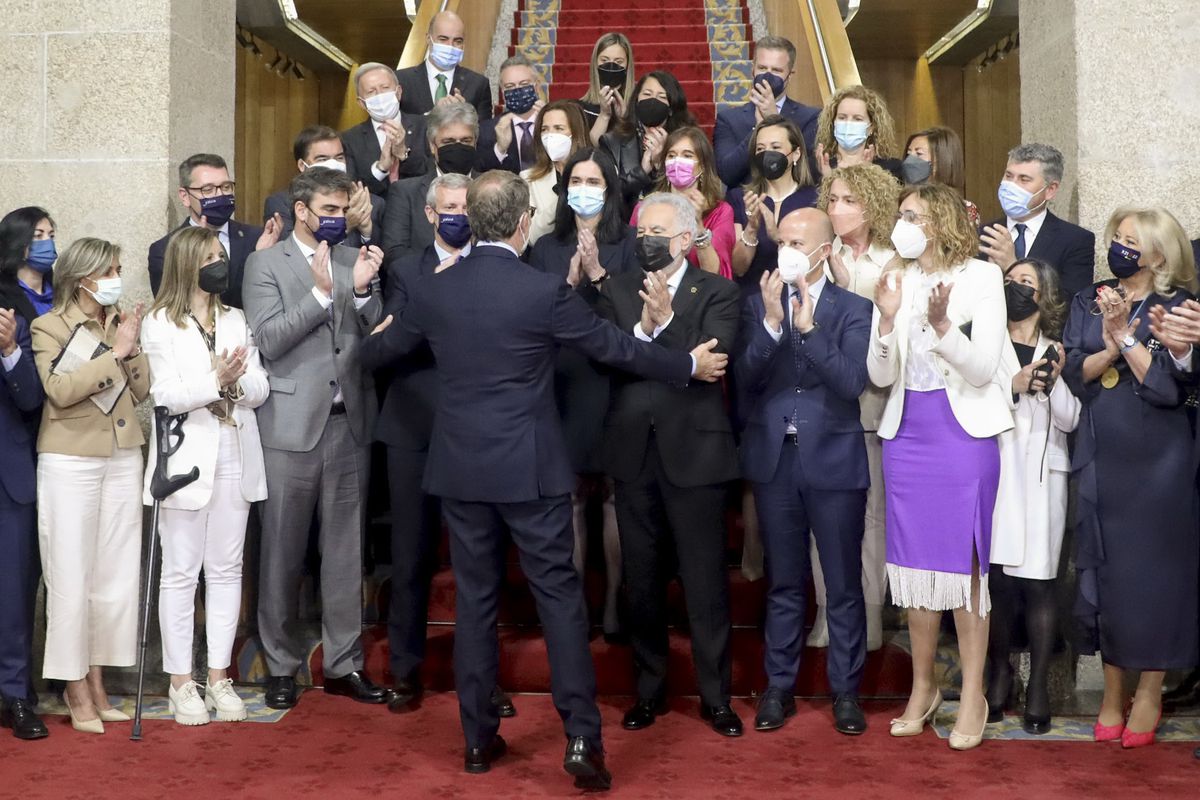 The Galicia that Feijóo leaves 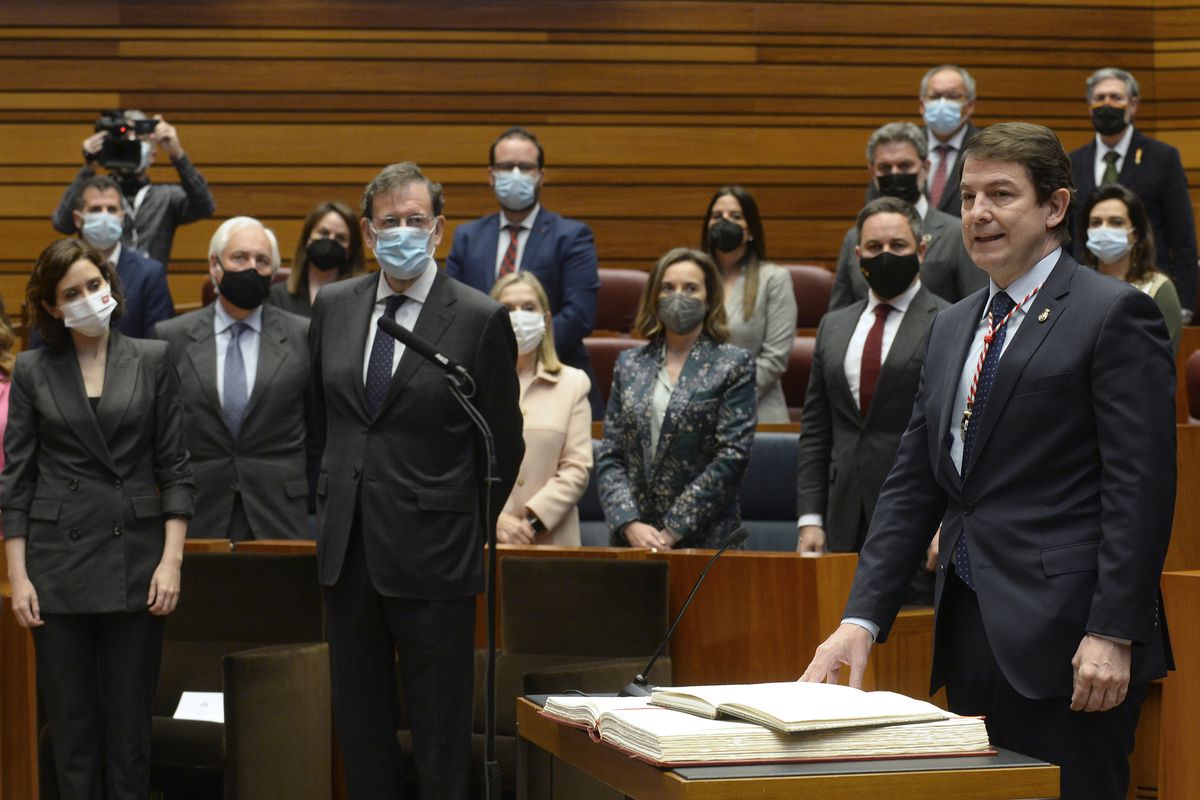