War in Ukraine: Steelworks in Mariupol under attack again

War in Ukraine: Steelworks in Mariupol under attack again Created: 05/14/2022, 11:18 am By: Tobias Utz, Sandra Kathe, Teresa Toth, Katja Thorwarth, Daniel Dillmann, Nail Akkoyun, Andreas Apetz The situation in the Ukraine war continues to deteriorate: military, diplomatic and humanitarian - the news ticker on the war on Saturday, May 14th. Battle for the Donbas: The events in the Ukraine war a War in Ukraine: Steelworks in Mariupol under attack again

The situation in the Ukraine war continues to deteriorate: military, diplomatic and humanitarian - the news ticker on the war on Saturday, May 14th.

According to Ukrainian information, the Russian military has again fired on the contested steel plant in Mariupol – despite the ongoing negotiations.

Mariupol city council deputy Petro Andryushchenko said on Telegram that there were both air and ground attacks.

Not only those defending Mariupol would be attacked, but also their families.

Along with the Telegram message, the deputy also published a video that is said to show the Russian attack on the steel mill.

So far, however, it has not been possible to independently check where and when the recordings come from.

Smoke rises from the Azovstal Steel Works in Mariupol during shelling.

The government in Kiev now sees the Ukraine war in the “third phase”.

In "phase one" Russia tried to overrun Ukraine "in a few days", explained Viktor Andrusyw, adviser in the Ukrainian Ministry of the Interior, on Friday.

In the second phase, the Russian army tried to encircle the Ukrainian armed forces: "And they didn't manage that either," said Andrusyw.

Now, in the third phase, the Russian military is trying to defend the territory it has gained so far.

"It shows that they want to make a long war out of it," Andrusyw said.

According to Oleksiy Arestovych, adviser to the Ukrainian President Volodymyr Zelenyky, the image of Russia’s military as the “invincible, second largest army in the world” has already turned out to be a “fake”.

As he told the Unian news agency, the heavy casualties are proof of that.

Red.] threatened to dismantle NATO, but has already failed in two villages in the Sumy region (in north-eastern Ukraine)," said Arestovych.

However, the head of the Ukrainian military intelligence service assumes that a change of power is imminent in Russia.

There was also one death, as Governor Pavlo Kyrylenko said on Friday.

There had been Russian shelling in several settlements.

According to the US Department of Defense, the Ukrainian armed forces can continue to hold their own against the offensive by Russian troops in Donbass.

Pentagon spokesman John Kirby said on Friday evening that there was "tough" and "effective resistance" in the east of the country.

According to Kirby, around 105 battalions of the Russian army are currently on site.

The Pentagon spokesman also announced that US troops stationed in Europe will soon “rotate”.

What Kirby meant by that, he left open.

However, he was referring to Secretary of Defense Austin Lloyd.

Negotiations on the fate of the Ukrainian soldiers who are still locked up in the Azovstal steel plant in Mariupol are ongoing.

This was announced by the head of the military administration of the Donetsk region Pavol Kyrylenko.

"We don't have to talk about it until people are safe.

Negotiations are ongoing and they are really very difficult.

Because, first of all, the Russian Federation keeps changing them [the conditions],” Kyrylenko said.

In addition, one cannot rely on the agreements made with Russia.

During the Ukraine war, the breakaway conflict region of South Ossetia in Georgia wants to vote on July 17 about possible accession to Russia.

This was announced by its ruler Anatoly Bibilov by decree on Friday (May 13, 2022).

Known for his pro-Russian politics, Bibliov announced in March that unification with Russia was his "strategic goal".

The Georgian government calls such a referendum unacceptable.

During the Russian war in South Ossetia in 2007, Russia recognized the region as an independent state.

Since then, several thousand Russian soldiers have been stationed in the Georgian mountain region.

Ukrainian forces destroyed a pontoon bridge and parts of a Russian tank column trying to cross a river in the Donbass region.

The Ukrainian military announced this in a video on Friday.

Ukraine has pushed back Russian troops from the city of Kharkiv, making the fastest advance since Kremlin troops withdrew from Kyiv more than a month ago.

For a long time, Kharkiv was considered a hard-fought area and an important position for Russian troops.

According to information from the Reuters news agency, Ukraine now has an area up to the bank of the Siversky Donets River, about 40 kilometers east of Kharkiv.

The fighting in Ukraine's second largest city is said to have calmed down for two weeks.

In Ukraine, the first trial for alleged war crimes against a Russian soldier is scheduled to begin next week.

According to Ukrainian media reports, the hearing was postponed to Wednesday (May 18) by a court in the capital Kyiv at the request of the prosecutor's office so that it could be open to the public.

The soldier was provided with a public defender and a translator.

Current pictures from the steelworks in Mariupol show that many of the Ukrainian fighters who are still trapped are injured, some of them seriously.

The 21-year-old is accused of shooting dead a 62-year-old in the Sumy region in north-eastern Ukraine because he was on the phone.

The soldiers had previously taken over a car from civilians because their own vehicle had been destroyed.

The suspect described the events in a video confession published by the SBU secret service.

A conviction is therefore considered certain.

Russia fired on the city of Kremenchuk in the Ukraine war.

Aerial photos released by the Russian Defense Ministry are said to show a destroyed oil refinery near the city.

The attack was carried out by a Russian warship and by medium-range missiles.

The events in the Ukraine war are shifting more and more to the east of the country.

According to the US news channel CNN, the Russian army is launching two new attacks on Luhansk and Donetsk.

According to CNN, the Kremlin's troops are making "moderate gains in area".

According to its own statements, Russia has gained control of Rubischne.

The city with 60,000 inhabitants is located northwest of Luhansk.

To prevent counterattacks, Russian troops destroyed a bridge near the city over the Seversky Donets River.

This is reported by the Ukrainian Ministry of Defense.

According to information from the Kiyv Independent news portal, Russian troops have launched a new offensive on the Azovstal steel plant in Mariupol.

Ukrainian soldiers continue to occupy the Mariupol Steel Plant, but have repeatedly urged the Ukrainian and international leaders to find a way to free them from the besieged plant.

In the Black Sea, a Russian supply ship is said to have been damaged by a rocket attack by Ukraine, reports the news portal ntv.

The damaged Russian ship is said to be near Ukraine's maritime border with Romania.

According to British findings, Ukrainian drone strikes have so far prevented Russian troops from dominating the Black Sea.

Almost two and a half months after Russian troops invaded Ukraine, according to Ukrainian President Volodymyr Zelenskyy, Russia’s strategic defeat is “obvious”.

Moscow's defeat was "obvious to everyone in the world and also to those who still communicate with them (the Russians)," Zelenskyy said in his daily video message on Thursday evening.

Only Russia does not have the courage to admit defeat.

"They are cowards trying to hide this truth behind new missile, air and artillery strikes."

Aerial photos of the city of Kremenchuk show an oil refinery destroyed in the Ukraine war.

An air raid by Russian forces on Nowhorod-Siverskij in the Chernihiv region hit two schools and several administrative buildings.

This was announced by the North Command, according to the Ukrajinska Prawda news portal.

Several rockets hit a local school, a boarding school, the regional administration building, a medical school dormitory, a shop and some private homes.

At least three people were killed and twelve injured.

When trying to take other towns in the Donbass, the Russian military failed in several places on Thursday.

This was announced by the General Staff of the Ukrainian military, according to the news portal The Kyiv Independent.

For example, an attack on the village of Oleksandrivka in Donetsk Oblast was unsuccessful, and the Ukrainian fighters were also able to successfully defend the town of Voyevodivka in Luhansk.

In the eastern Ukrainian region of Luhansk, Ukrainian troops say they have destroyed two pontoon bridges belonging to the Russian military over the Siwerskyi Donets river.

A third bridge will surely soon be destroyed.

He also presented drone footage of dozens of destroyed vehicles and armored vehicles.

The pictures were already circulating the day before.

The video shows two Russian soldiers standing in front of the fence of a company premises and opening fire on two unarmed civilians.

The incident is said to have happened at the beginning of the war in Ukraine, when Russia tried unsuccessfully to capture the Ukrainian capital, Kyiv.

According to information from the US broadcaster CNN, the Ukrainian military has admitted Russian advances in some areas in eastern Ukraine.

However, the extent of the progress is difficult to measure.

In its daily situation report, the General Staff said Russian forces had crossed the Siverskiy Donets River towards Lyman in the Donetsk region.

Lyman is a city northeast of Sloviansk, one of the strategic destinations of Russia.

Several bridges across the river had been destroyed in previous fighting.

The Cherson region in Ukraine apparently wants to ask Russia to annex the area, reports the Moscow Times news portal.

The Russian military took control of the Kherson region at the end of April, replaced the Ukrainian leadership with a pro-Moscow “military-civilian administration” and completed the conversion to the Russian ruble.

So far, the Kremlin has neither confirmed nor denied plans to annex Kherson.

The decision should be "with the residents of the region."

According to a report by the organization Human Rights Watch, the Russian armed forces have used internationally banned cluster munitions in Ukraine.

As a result, hundreds of civilians died and schools, residential buildings and hospitals were damaged, the human rights organization reported on Thursday in Geneva.

The Ukrainian army also used such ammunition at least once.

There is an international treaty that has banned the use, stockpiling, trade and production of cluster munitions since 2010 (Cluster Munitions Convention).

Strictly speaking, however, only the 110 contracting states are bound by it.

Russia and Ukraine are not among them.

Nonetheless, the widespread condemnation of so many countries has made the use of these weapons internationally outlawed. 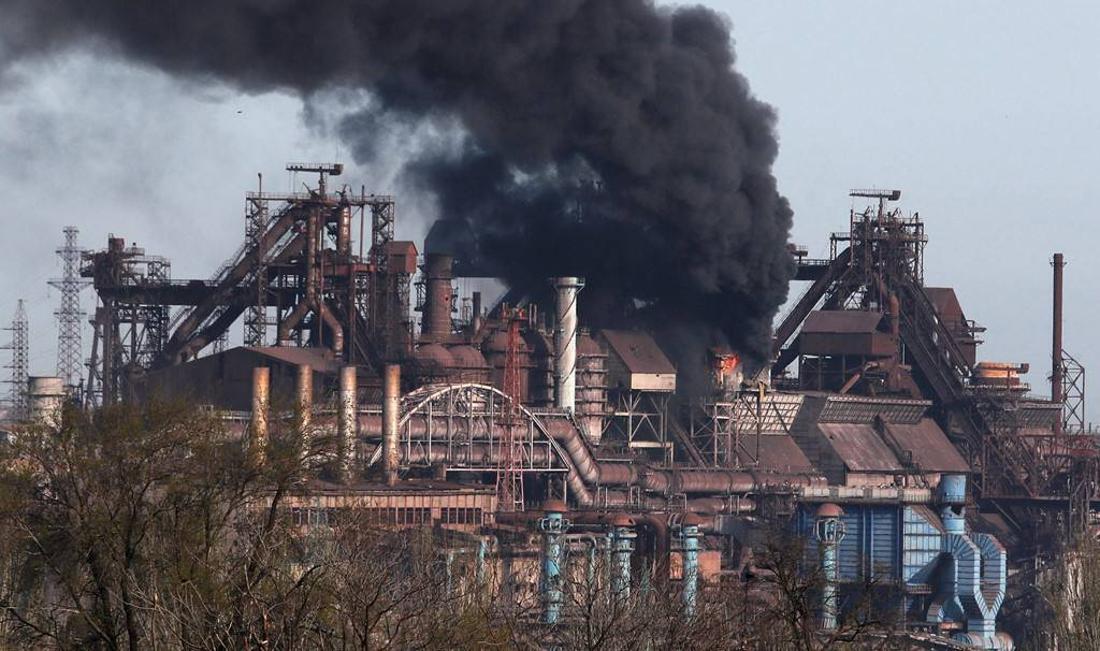 Mariupol: Battle draws to a close 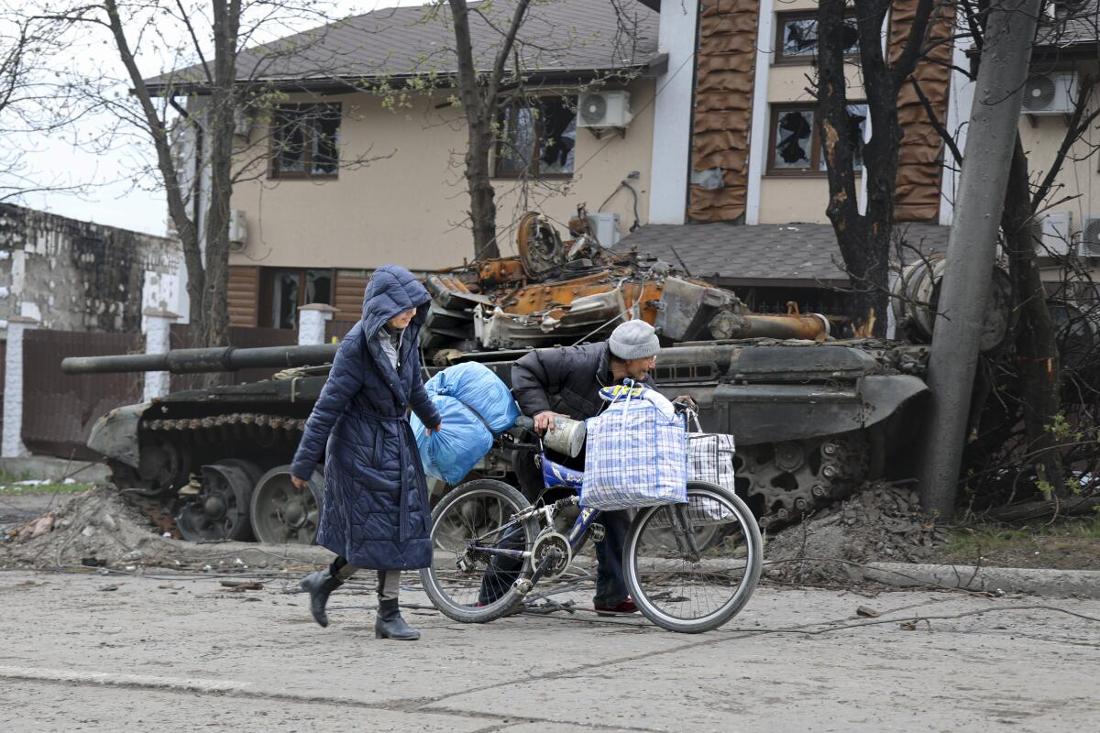