Waiting for weapons on the Luch front: "Not even my commander has a decent machine gun"

In a war where killing is done from drones and missiles fired from bases hundreds of miles away, a heroic Ukrainian battalion stares the Russians in the face 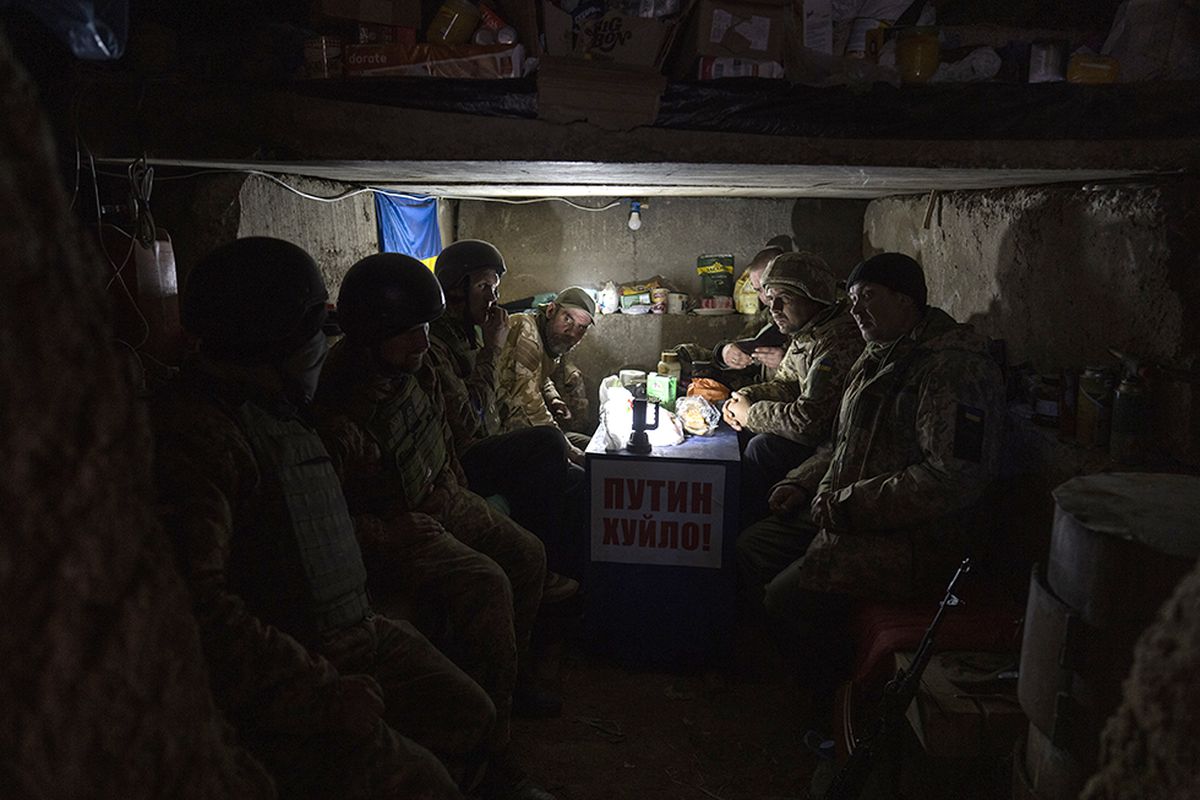 The first six soldiers to arrive at the detachment take a break leaning against the wall.

The first loosens his boot laces, the second finishes his cigarette, and the third wipes the sweat with a handkerchief as black as his cartridge belt.

Two more, exhausted, appear behind him carrying a cumbersome machine gun and behind them, with the Kalashnikov rifle hanging in his right hand, the last one reaches the detachment dragging his feet inside a vest from which hangs all the possible accessories: bullets, magazines,

, flashlight, rubber bands to make a tourniquet, four grenades and a knife at shoulder height that today has not been used to kill enemies, but to peel an apple.

The six remain silent except for the tall one who mutters and clears his throat until he spits up blood that he wipes away with the black handkerchief.

The war in Ukraine, live

Leaning against the destroyed wall of what was the doctor's house, the dejected battalion embodies the cruelty of the battlefield and the courage of an army that combines professionals with enthusiastic volunteers in the trenches.

In a war in which people are killed from drones and attacked with missiles that come from bases located hundreds of kilometers away, the soldiers and militiamen stationed in Luch are the front line of a resistance that comes face to face every day. Russian soldiers move.

An army of soldiers like them, which is barely seven kilometers away, if the day has been good.

Wrapped in sweat and mud, the battalion slowly regains their speech.

The first thing is to call home.

Although the commanders forbid the troops to give their location, in the conversation the most often calls to say that everything is fine, but he is not even able to deceive the family because the bombs sound every few minutes and slip through the line.

Sometimes Russian artillery blasts sound 30 minutes apart and other times the ground shakes three times in less than a minute.

Sometimes the pauses are long and disturbing.

It is difficult to know if the enemy has gone to rest or the worst is coming.

Sergei, who before the war worked in a shipyard repairing ships and did not smoke, now eats his cigarettes.

Luch, the place they protect as an outpost, is a small town located 20 km from Mikolaiv, considered the main parapet of Odessa, the large city in the south of the country, 135 kilometers away.

With half a million inhabitants, until before the war Mikolaiv was an important economic engine of the country that lived from the three shipyards and the port on the Black Sea that feed the city.

Paradoxes of history, many of the Russian ships that today launch the missiles that have punished Odessa and Mikolaiv since February have been manufactured here.

Just this week, when all eyes were on Moscow, both cities

on Victory Day receiving a barrage of missiles from Vladimir Putin that destroyed military targets and civilian homes in equal measure.

After more than two and a half months of attacks, the consequence is that Mikolaiv, located in the largest estuary in Europe, has no water and the daily image of the city is that of thousands of people queuing in front of tanker trucks. .

In this part of the country the war is fought inch by inch.

Just 90 kilometers southeast of Mikolaiv is Kherson, a city controlled by Russia.

In Kherson, the use of the ruble is forced, the Ukrainian flags have been replaced by red, white and blue Russian ones and the mayor imposed by the Kremlin called for a referendum for immediate annexation to Russia.

And in the midst of both follies—the Mikolaiv without water and the Kherson that pays in rubles—a small town, Luch, and the detachment leaning against the wall that defends it.

Until February 24, Luch was a quiet, tree-lined town with clean sidewalks located between two beautiful estuaries that had a school, two churches and a playground in the center.

On each side of the main street there were simple two- and three-story buildings that the Russian artillery has reduced to a heap of rubble, broken glass, broken doors, collapsed walls, kitchens that were blown up, and halls devoured by fire.

Where before there were children playing, women shopping in the market and peasants on bicycles, it is now a ghost town in which the undergrowth has begun to devour the swings.

The old tree-lined streets are now a succession of shell holes into which a vehicle can fit.

Two streets in a straight line and one to the left from the playground appears the first glimpse of life.

It's about Andrei, a 62-year-old electrician who, after a week living in the basement, finally rears his head like a scaredy mole.

Tired of preserves and canned food, he has decided to go out to the garden and cooks a mushroom soup with firewood, the only thing he has found with the possibility of flavoring the water.

Has this week been tough?

“See that hole?” he says pointing to the crater in his garden, “it's from three days ago.

“If he wants to go see them, watch out for the mines and stay on the trail,” he clarifies.

To explain the level of destruction, Andrei hesitantly shows the jug in which he used to heat milk, an iron bowl shattered to shreds by shrapnel from the last shell.

"The Russians have killed more than the Nazis when they passed through here."

The background music of the conversation is the explosions of the projectiles.

After many weeks, Andrei has learned to distinguish even the model of the projectile “that is a cluster bomb.

That longer sound is a grad,” he says.

And why doesn't he go away?

“Because here is my house, my neighbors, my cats…” explains the electrician with a log in his hand to put on the fire.

Pride prevents him from admitting that many people from the villages do not want to go to cities where they do not know anyone, even if their lives are in danger, so as not to end up living on charity in other shelters surrounded by strangers.

Put to live in a basement for weeks, they prefer their town.

Andrei, who does not want to give his last name, seems to be the only inhabitant of Luch until he invites the journalist to see his new home, a small hut that looks like a tool cellar.

But the place contains a secret, namely 30. When Andrei opens the door, he reveals a staircase leading to a cold, dark cellar, lit only by a couple of light bulbs from a generator.

10 meters below ground, silence and humidity are thick.

At the end of the stairs there is a corridor where cans of preserves are stored and then a curtain that Andrei draws back and behind which a dozen elderly people appear waiting on cots.

“I knew a few words in Spanish”, says the most adventurous old man, an old man with white hair and a mustache happy to see a foreigner who is not Russian: “Long live Spain, paella,

sangria”, and he laughs generously to himself before returning to the silence of the wake.

In the next room, 20 other neighbors have been doing the same thing for days.

Every so often, the ground shakes with the explosions.

“Before we had animals: pigs, chickens, rabbits… but they ran away with the shelling,” Andrei says back to the surface to explain the colorless water in his soup.

“Where are the weapons that Europe sends?”

Morale among the troops is not the highest.

After more than two months of war, patriotic enthusiasm has given way to the wounded, the blood, the invalids, the evacuees and the thousands of militiamen who initially signed up to fight against Russia have discovered the hardship of sleeping underground every day in a warehouse surrounded by worms, cans of preserves, explosives, cans of tuna and a blue and yellow flag.

“This is where I sleep,” says soldier Sergei, pointing to such a place underground.

Sergei, who wears a khaki suit several sizes too big, thinks that Russia "is using old weapons, but when they come with the new ones it will be a horror," he says, dejected after a hard day at the front.

“Where are the weapons that Europe sends?

They are not coming here.

Look, my weapon is an old pot,” he says of the 25-year-old Kalashnikov hanging around his neck.

"Not even my commander has a decent machine gun," he says, pointing to the superior who leads the group of heroes protecting a pile of rubble, a playground, a school and two churches.

Next to the cold bunk every night, Sergei is the image of fear.

His eyes water as he details the day to day on the front line.

So he tries to change the subject by showing the journalist on his mobile some photos of his previous life in the shipyard.

Then he moves his finger with such speed on the phone that when the photos of boats, iron, and welding are finished, a photo of a woman appears and then some parents and a family... and the thick silence returns, that in which nobody is calm .

The Ukrainian authorities forbid giving details about the number of men, weapons, so some details have been omitted and some names have been changed.

Waiting for weapons on the Luch front: "Not even my commander has a decent machine gun" 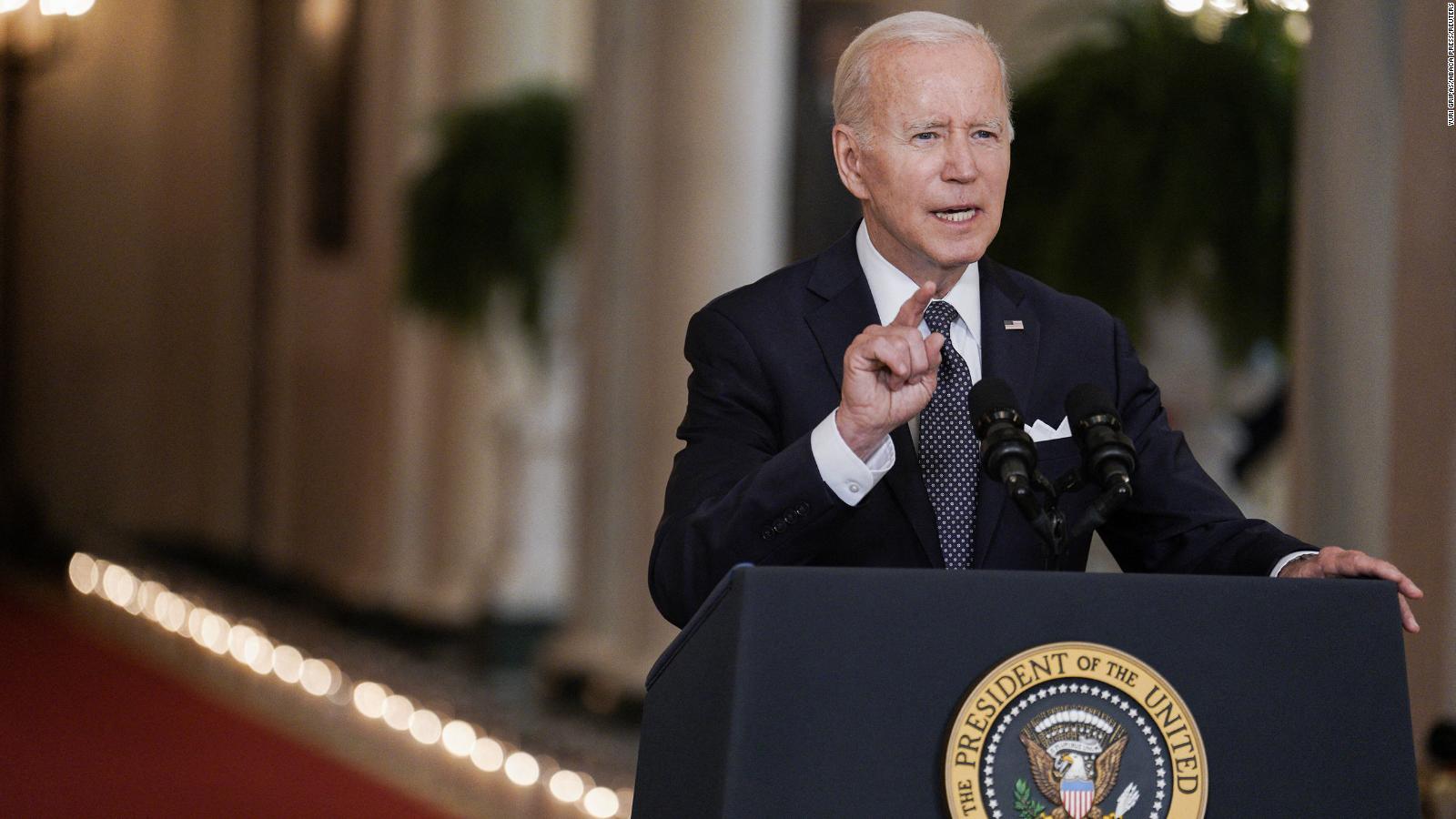 The key moments of Biden's speech calling on the country to take action on the use of weapons in the US. 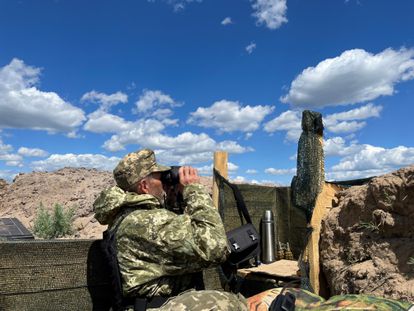 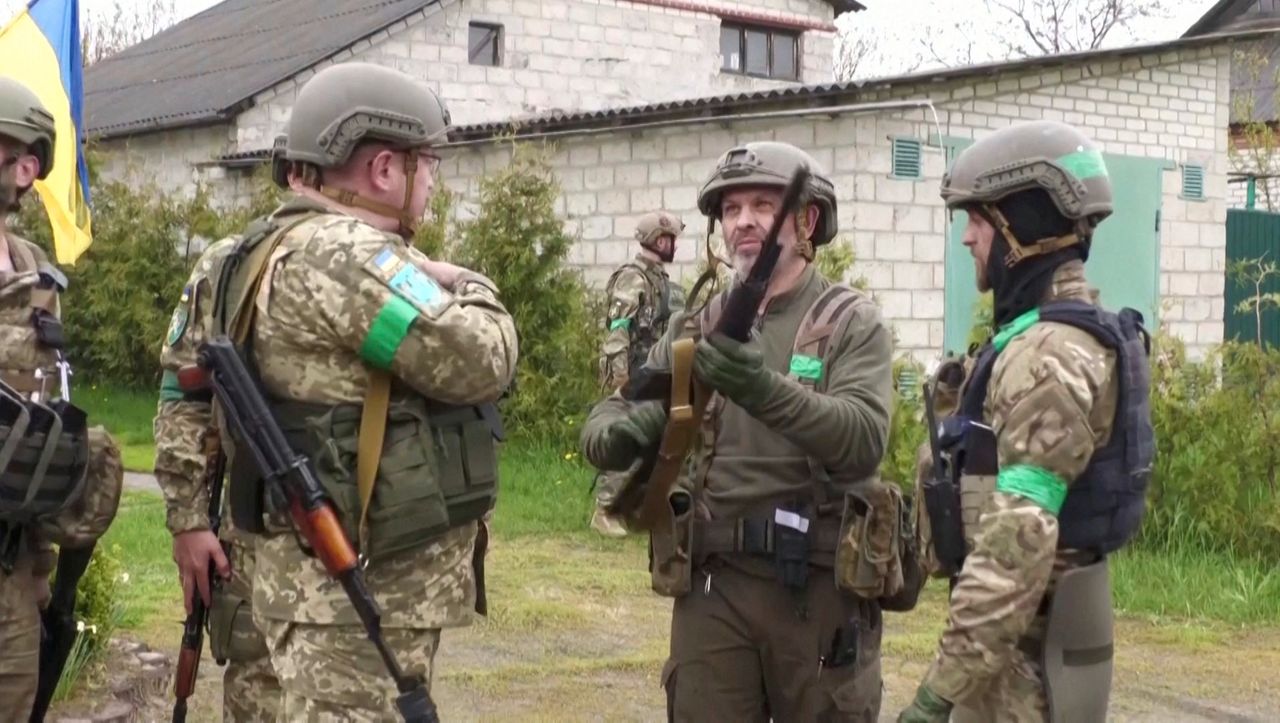 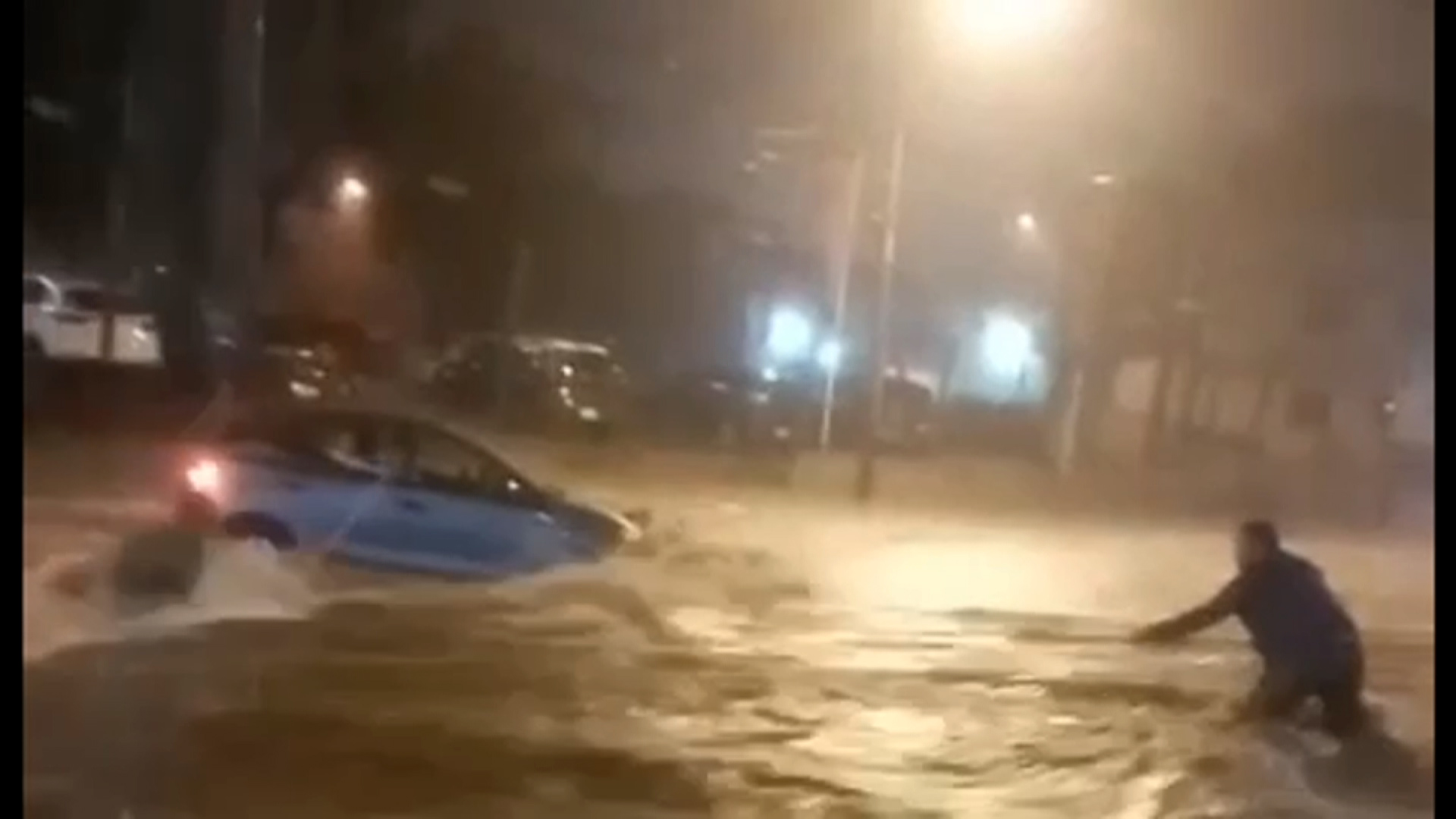 Assumption Festival was suspended due to rains and floods 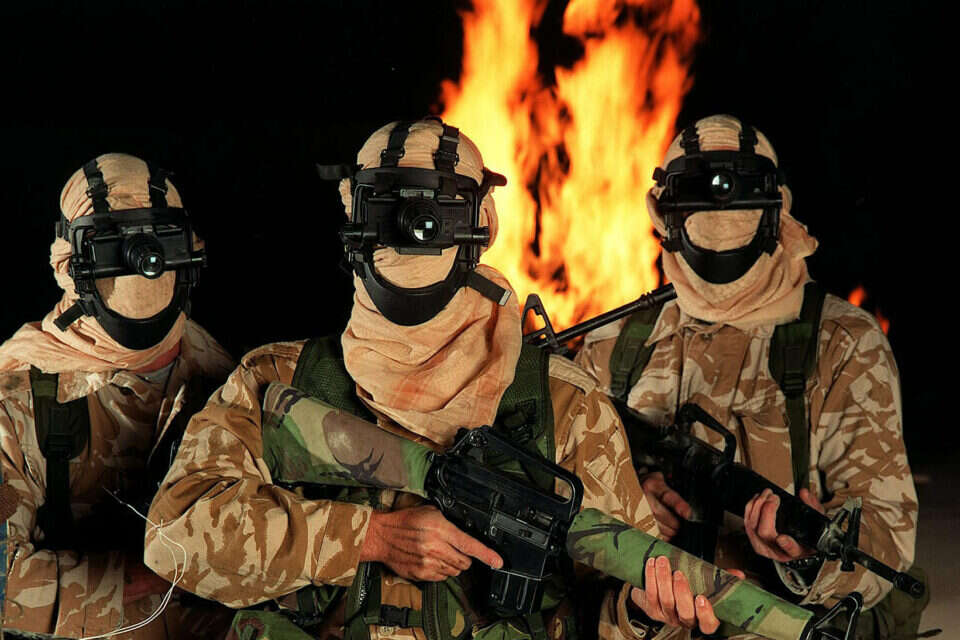 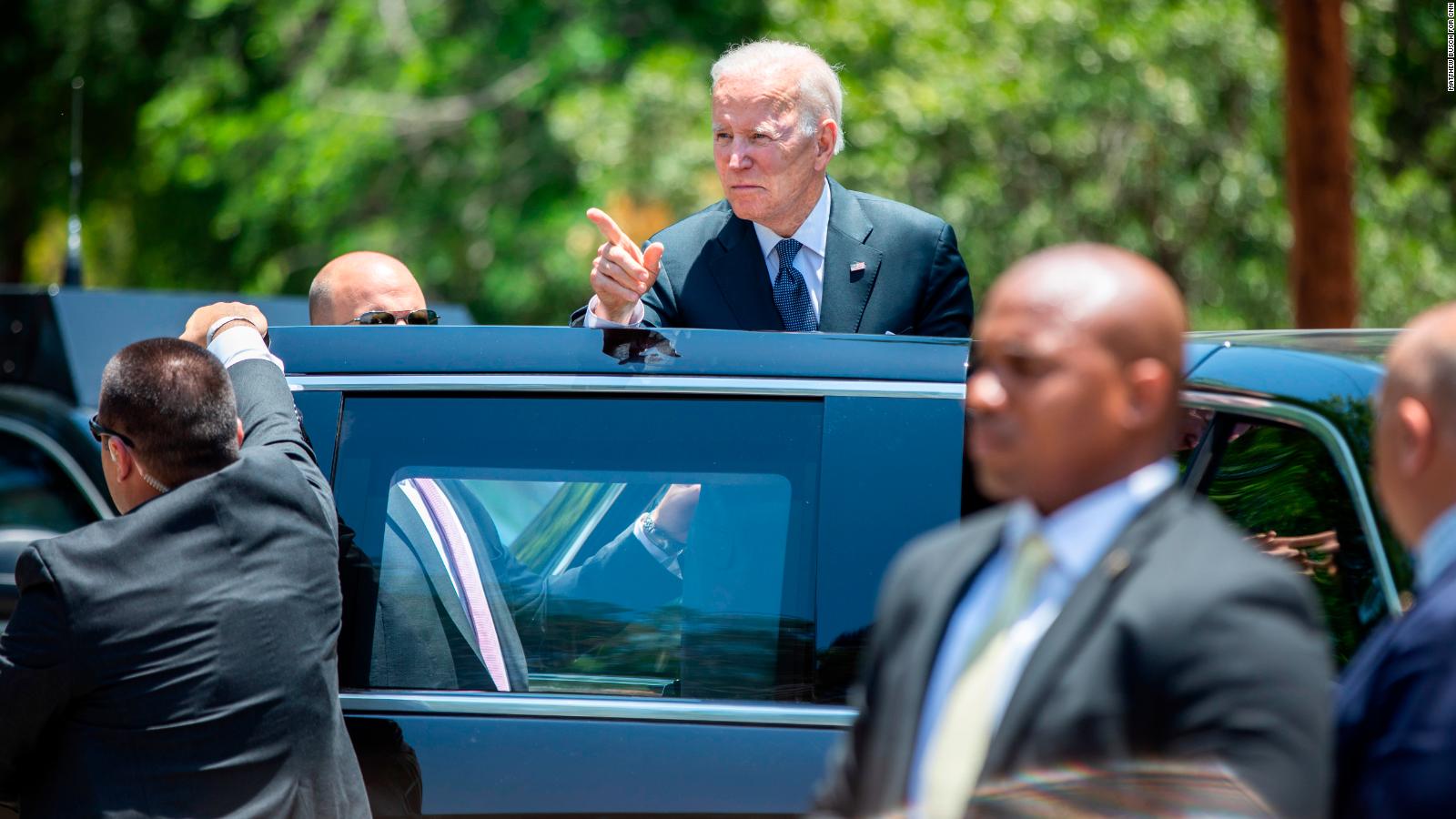 ANALYSIS | Biden accompanies the families of Uvalde in mourning him, but it will be difficult to fulfill his promise to "do something" about gun control 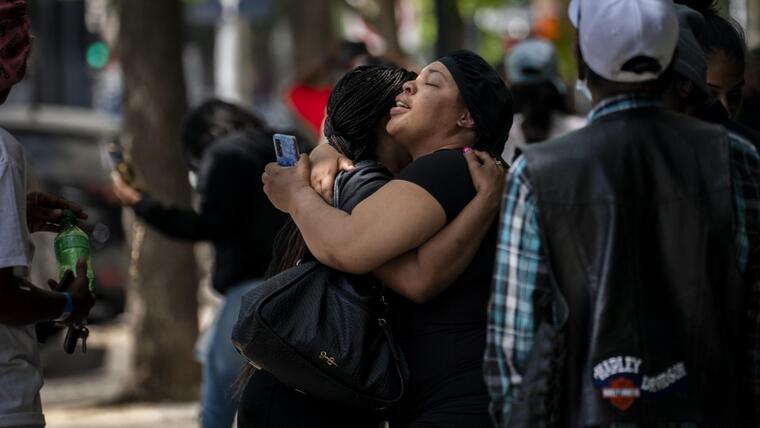 Will a "smart gun" finally hit the market?