Dried up: The Hackenseebach in spring 2022. The spawning waters it fed in the Teufelsgraben then dried up as well.

Newts and toads in the Teufelsgraben are threatened with extinction.

This is the balance of this year's amphibian migration.

The Bund Naturschutz is now considering concentrating on Sufferloh.

Holzkirchen - "It doesn't look good for the amphibians in the Teufelsgraben," says Helmut Schneider.

"If it snows so little again next year and the summer is dry, I don't know where the amphibians will be able to spawn."

Schneider coordinates the amphibian protection project of the Holzkirchner local group of the Bund Naturschutz.

In the spring, he and other friends of Toad and Co. helped the migrating amphibians across the street in the Teufelsgraben and in Sufferloh.

Over a period of four to five weeks, the team documented exactly which and how many animals were rescued on the way to their spawning grounds.

Their record for the Teufelsgraben is bitter: never since the start of the amphibian protection campaign in 1998 have so few animals been carried across the street as this year.

Only 774 migratory amphibians were counted, down 35.6 percent from last year.

Helmut Schneider, here with rescued amphibians in the Teufelsgraben, coordinates the protection project - and is considering transferring the resources to Sufferloh in the future.

Schneider attributes the rapid decline to the fact that the two spawning waters fed by the Hackenseebach in the Teufelsgraben have dried up.

As does the Hackenseebach itself over a long stretch.

According to the observations of the Holzkirchner amphibian protectors, the situation has been coming to a head since 2016.

Since then, the meadow south of state road 2073 has been flooded less and less frequently during the snowmelt.

However, the meltwater is necessary because it feeds the spawning waters through a drainage pipe under the road.

A few dry summers followed, so that in 2019 the spawning waters in the Teufelsgraben only held water intermittently for the first time.

Although the situation improved again last year, the result of this year's census shows that the long-term trend is unlikely to be reversed.

The development has consequences for the amphibian protection project: "We have to check to what extent the protection of amphibian migration in the Teufelsgraben still makes sense and is justifiable given the high amount of work involved," says Schneider.

The BN local group does not want to end the project in Teufelsgraben next year, but may reduce it - in favor of the protection project in Sufferloh.

The idea is to move one of the two protective fences in the Teufelsgraben.

Namely the one that is supposed to protect the amphibians that migrate back to their summer quarters after spawning.

In the past, 600 to 1,400 females migrated back during the mating season each year.

"This year there were 36," says Schneider, "so basically zero".

Not a single newt was among them.

In Sufferloh, on the other hand, where there is no protective fence for returning amphibians (only the way to the spawning grounds is secured), a return migration took place for the first time this year.

In any case, the population in Sufferloh is developing well: 1,442 amphibians – almost exclusively common toads – helped Schneider's team across the street.

An increase of almost 72 percent compared to the previous year.

"We don't yet know what caused this pleasing development," says Schneider.

However, in view of the limited resources, it might make sense to secure the return migration here instead of in the Teufelsgraben.

You will receive a selection of all relevant news and stories regularly and directly by e-mail in our free newsletter. The frogs’ migration season is approaching: helpers are getting ready 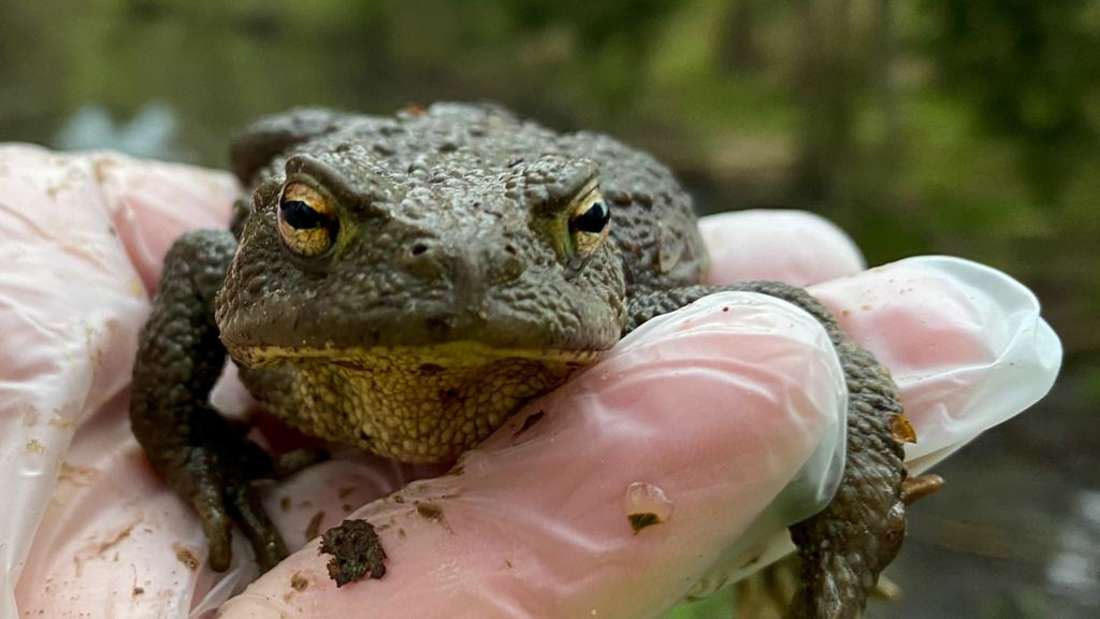 Key point is done: Teufelsgraben cycle path will be finished in May

Bye bye mountains of laundry: With these tips, you'll never have to iron again