The new battle in the suburbs of kyiv: rebuilding the life that shattered Russia

Scared of the fear of a possible return of the enemy, the surroundings of the Ukrainian capital that the Russians occupied are focused on rising from the rubble, reopening businesses and recovering essential services 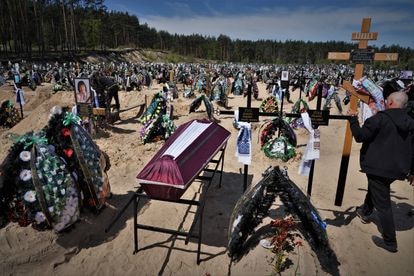 “Mom, where are you?

How to survive without you?

Between sobs, Natalia Mirko, 52, hugs the coffin of her mother while she invokes her.

Professor Anna Starostenko, 73, was one of the few neighbors who stayed in her house in Irpin during the month of occupation of this Ukrainian city by the Russians.

The woman survived the fighting and the lack of water, electricity and gas.

On May 9, a little over a month after the invaders had withdrawn and when the city was beginning to come back to life, her heart said enough is enough.

Life in Irpin continues its course.

The grave of this doctor in Economics appears surrounded by dozens of others, all covered in flowers, of the approximately 300 civilians who died under the yoke of the Russian occupation in this town on the outskirts of kyiv.

The specter of a possible return of Kremlin troops, omnipresent in the first days after the Ukrainian authorities regained control, seems to have vanished.

But getting back to routine in the suburbs of kyiv is not going to be easy or immediate.

Of the approximately 100,000 people who lived in Irpin when the invasion began on February 24, only about 5,000 stayed.

So far, some 20,000 have returned, according to the data that she offers in her office Julia Ustych, deputy to the mayor and responsible for humanitarian affairs at the municipal level.

In other words, 75% of the inhabitants still have not returned home.

Ustych, whose 17-year-old son is fostered by a family in Zaragoza,

Live, the last hour of the war in Ukraine

Another of the main battlefronts is to restore essential services.

On the stairs that give access to the Town Hall several people take turns next to a power strip with several plugs.

“Gas has recently arrived at my house, but many things depend on electricity, such as the radio, the washing machine, the telephone…”, laments Svetlana, 46, as she unwinds the charger for her mobile.

Next to her is Aleksander, 59, waiting for his laptop's battery to charge.

"In my house there is still no water, no heating, no electricity," he says.

He endured the war and the Russian occupation in his house, but died of a heart attack on May 9. Luis de Vega

Equipped with orange vests, a group of young people is busy clearing up a half-ruined building.

They are volunteers of the District One Foundation, born in 2018 in kyiv to fight against gentrification.

With the outbreak of the conflict, they began to help looking for funds to support the Army and get medicine or food.

Now they focus on reconstruction.

Coordinated with the authorities and once the demining and location of explosives and artifacts teams have passed, they get to work.

Paul, 36, is one of the more than 400 who make up the WhatsApp group in which they are organized.

Covered in dust, he is outraged at what he had to do while cleaning up a school in Borodianka that the Russians occupied.

"In the library they shit on the floor and wipe their asses with our flag."

In recent days in Irpin some shops have been reopening, especially food stores, where there are even fresh products such as meat or fruit.

But the streets remain almost deserted and the city does not wake up all day.

There are few children who are seen on the street with their parents.

School number two, in whose courtyard Sasha was buried, a neighbor of the building opposite whose body has already been transferred to the cemetery, remains closed and with significant damage caused by the projectiles.

The columns of smoke had barely disappeared when Irpin's marriage, made up of Cristina, 25, and Andrei, 26, resumed their cafeteria project in neighboring Bucha.

They had been given the keys on February 23.

But on the morning of the 24th, the invasion stopped everything.

Now they are waiting for the last windows to be installed to open the doors of Ristretto.

It will do so right on Station Street, renamed Tank Avenue after a Russian armored column was shelled at this point on its way to take kyiv.

The silence, only broken by the passing of some vehicles, and the desolation continue to impose their law in Irpin.

As in school, the open wounds of the fighting in houses and buildings are still visible to all.

The damage is especially serious in the area that separates this town from Bucha.

On the main avenue, Maxim, 44, and other workers from the Best Internet company work replacing the damaged wiring with new one.

“Today the internet is used for everything”, he comments while a yellow public bus adds a note of color against the black of the fire that has painted the facades of the buildings dotted with rosettes from the impacts.

Eugeni Plashenko, 41, a police chaplain from Bucha, during a visit to Irpin.Luis de Vega

In one of them lived Natalia, 45, who returned last Tuesday from western Ukraine, where she took refuge.

She escaped when the clashes had just started and she left only the broken windows of her apartment, a third.

Upon returning, she has verified that the flames have devoured everything.

In the midst of the desolation, a red saucepan stands on one of the stoves.

The echo of the crystals when stepping on the ground is the only thing that is heard in a deserted and uninhabitable building.

Natalia, who spends hours on the street killing time, was one of the thousands of inhabitants who set foot in dust among the ruins of the bridge that connects Irpin with the capital.

It was destroyed with explosives by the local Army to stop the Russian advance and ended up becoming a symbol of the war.

Beyond that strategic location, just five kilometers from the entrance to kyiv, the Kremlin troops never passed.

But blowing up the bridge made it difficult to evacuate Irpin and other besieged towns.

Up to 40,000 residents fled the fighting, according to estimates by the municipal authorities, passed through the planks as a precarious footbridge that allowed fording the river.

Those images went around the world.

That dynamited infrastructure has not yet been rebuilt,

“The aggressors finally managed to enter our city and 70% of the infrastructure was destroyed or affected.

But at the same time, the municipal employee proudly recalls that she was the last shield in front of kyiv.

"Irpin became a fortress to protect the capital from the Russian occupiers," she says.

Now, the shiny asphalt that runs alongside the ruins of the bridge symbolizes the desire to win the battle of reconstruction. 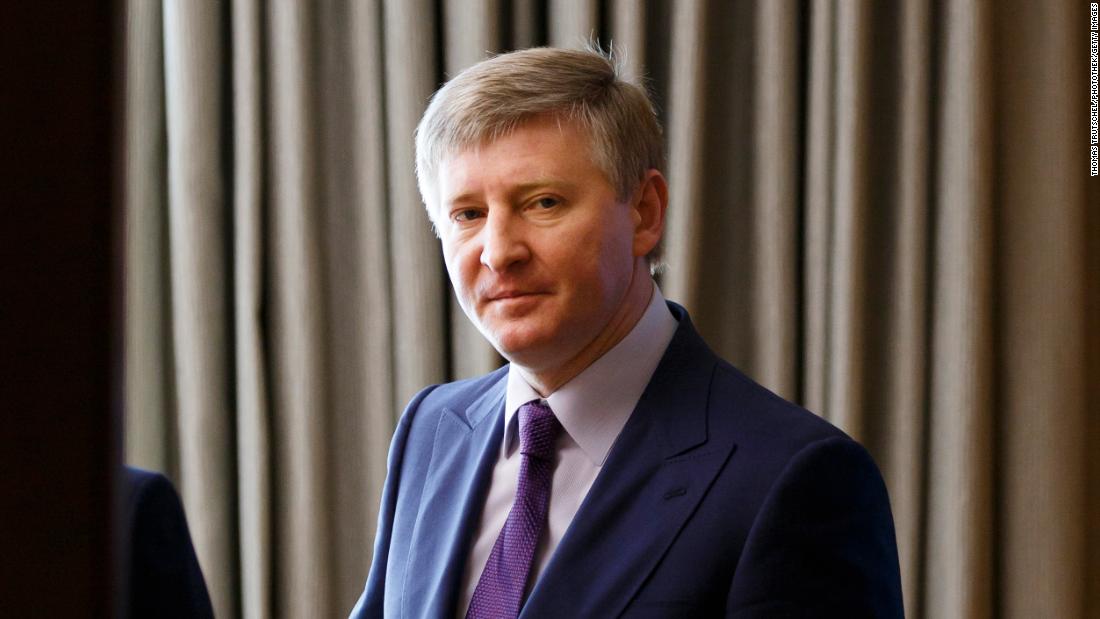 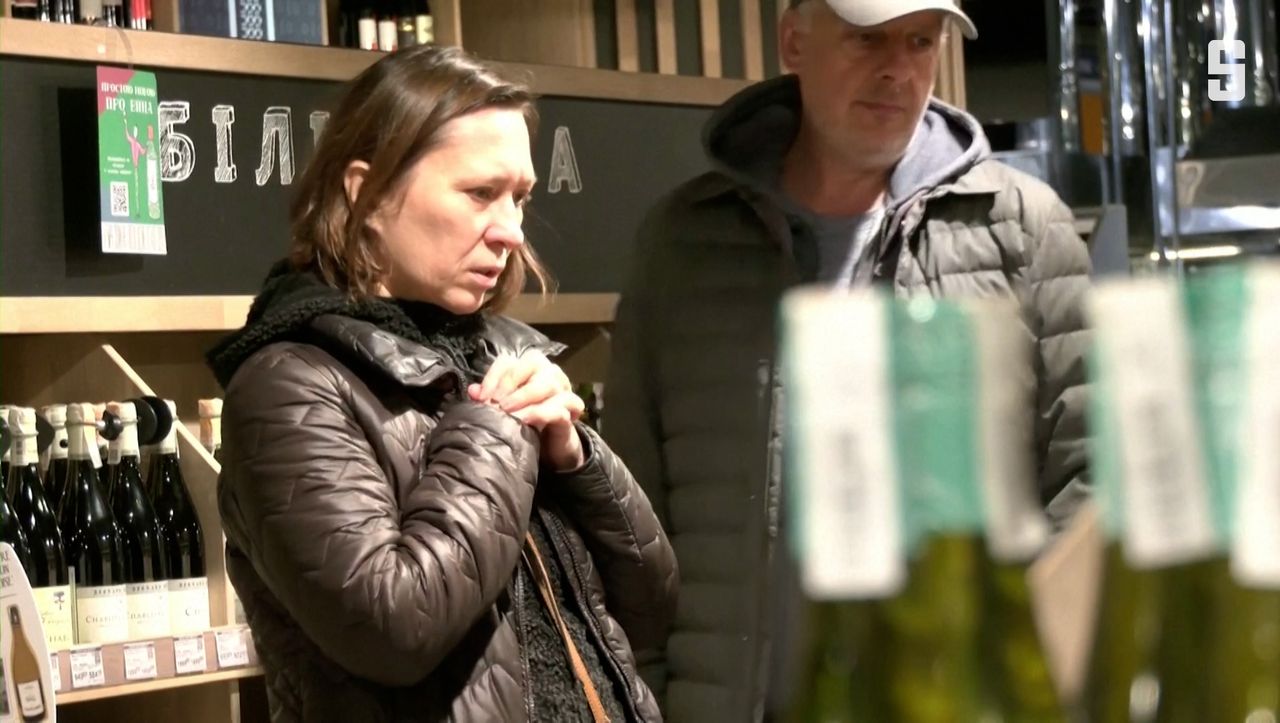 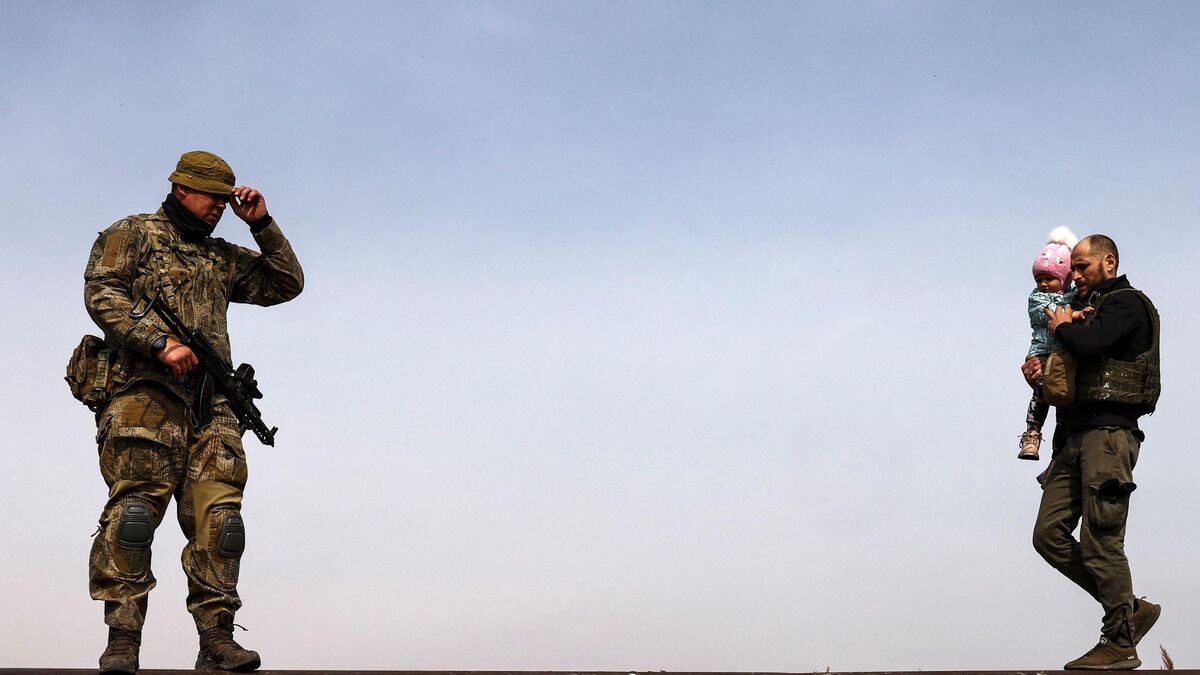 War in Ukraine: Zelensky at the UN Security Council, Boutcha, Russian redeployment... the point on the 41st day of the conflict 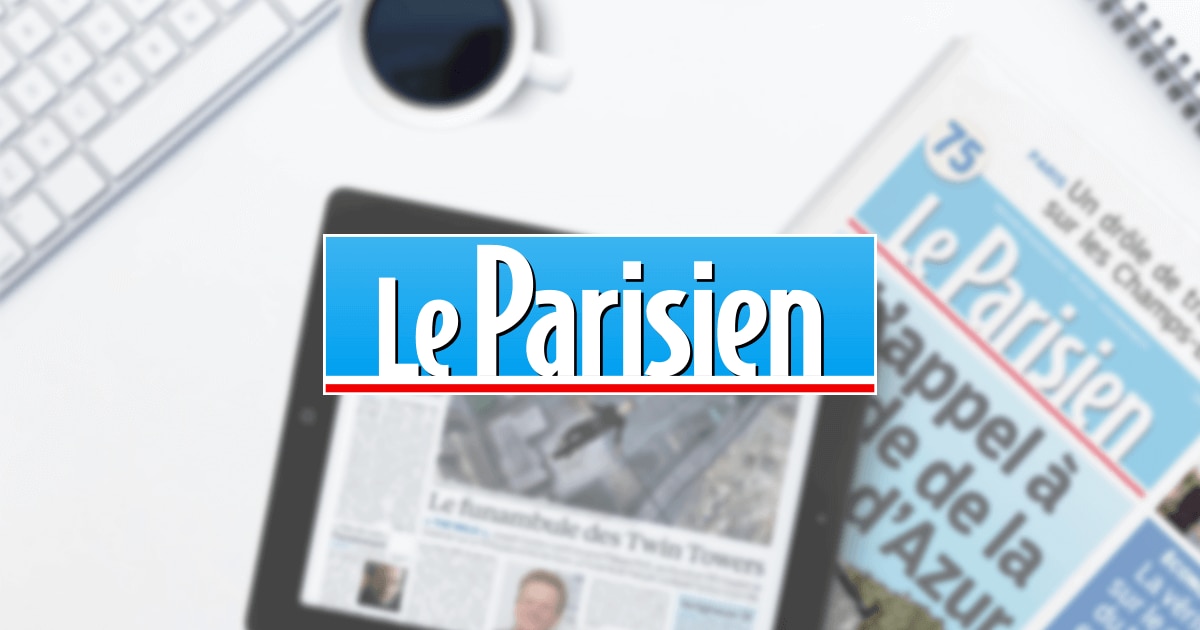 War in Ukraine live: Mariupol close to the precipice, the pressure is increasing in the East 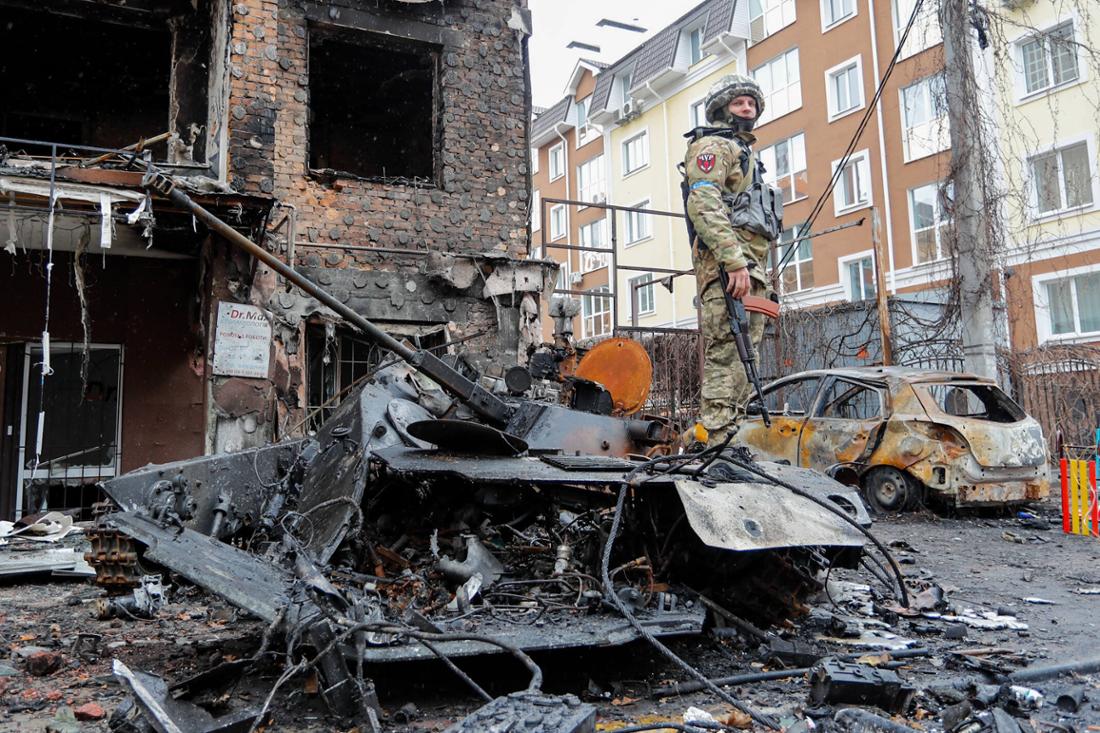 Battle for Kyiv: Russia defeated? "No guns, no food - they just run away" 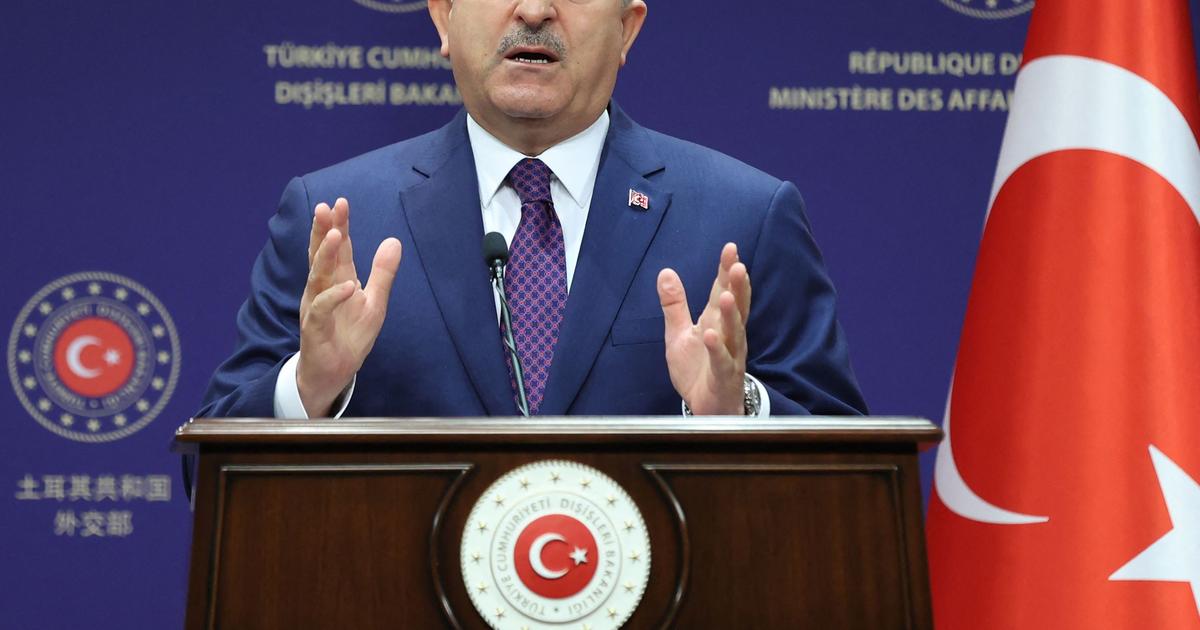 Decades will be needed to "restore trust" with Moscow, Ankara judge

Battle for Kyiv: Russia defeated? "No guns, no food - they just run away" 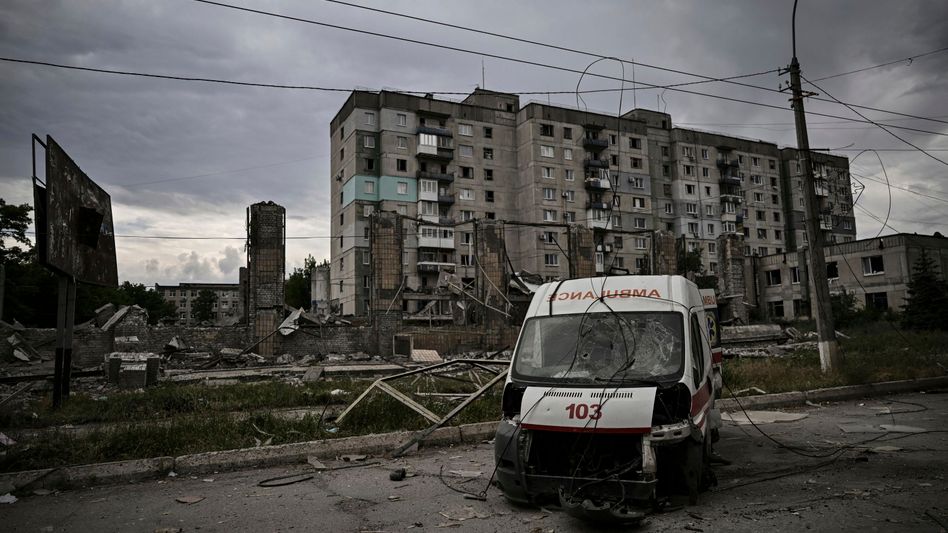