ANALYSIS | China is under alert by the Quad strategic security group, but its warnings only strengthen it

The Quadrilateral Security Dialogue, better known as "Quad", made up of the United States, Japan, India and Australia, will meet this week in Tokyo. 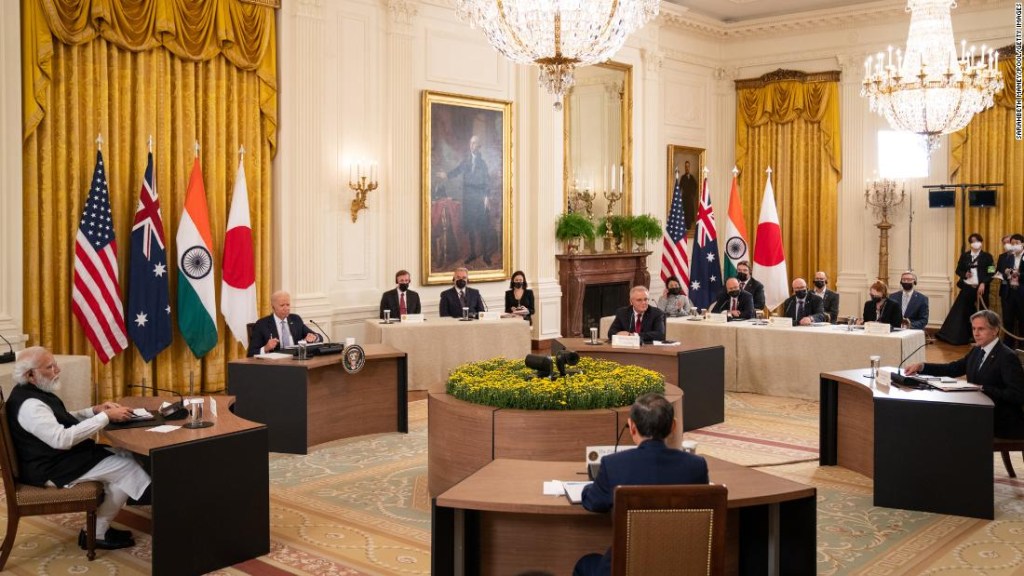 When the United States, Japan, Australia and India first resurrected their informal security group known as the Quad after a decade-long hiatus in late 2017, China was sure it would fail soon.

"There never seems to be a shortage of headline-grabbing ideas," Chinese Foreign Minister Wang Yi said dismissively of the grouping in early 2018, months after it convened its first working meeting in Manila.

"They are like sea foam in the Pacific or the Indian Ocean: they may attract attention, but they will soon dissipate," Wang said.

On the contrary, it has grown in momentum, profile and influence.

Convened around the mantra of promoting a "free and open Indo-Pacific," the four countries have held two naval exercises since 2020. Their leaders have met three times since last year, including an in-person summit at the White House.

This Tuesday, the four leaders will meet again face to face in Tokyo.

His summit will be one of the highlights of Joe Biden's first trip to Asia as US president, as he seeks to bolster alliances and partnerships to counter China's growing influence in the region.

The restart of the group's activities has turned China's initial contempt into alarm, as Beijing sees the group as part of Washington's attempt to surround the country with strategic and military allies.

Foreign Minister Wang called the grouping the "NATO of the Indo-Pacific", accusing it of "touting the Cold War mentality" and "stoking geopolitical rivalry".

The leaders of the Quad nations during their first in-person summit at the White House in September 2021.

That concern has only increased since the Ukraine crisis.

Beijing's backing of Moscow has further damaged its global image, leaving it more isolated on the world stage.

Nor does China's insistence on a zero-Covid policy help their cause, in which strict border restrictions are isolating the country from a world that has largely overcome the pandemic.

As Biden travels the world to bolster ties, his Chinese counterpart Xi Jinping has not left China in 25 months.

Biden's latest flurry of diplomacy, with stops in South Korea and Japan, has especially rankled Beijing.

"The US-engineered Indo-Pacific strategy, in the name of 'freedom and openness,' is actually interested in cliques," Wang said on Sunday, as Biden wrapped up his trip to Seoul and headed to Tokyo.

"It claims that it aims to 'change China's environment,' but its purpose is to contain China and make Asia-Pacific countries serve as 'pawns' of US hegemony," Wang added.

But experts stress that the Quad is not an Asian NATO nor does it aspire to become one.

Rather, they say its flexibility as an informal forum allows it to create more partnerships and broaden areas of cooperation, including on the new Indo-Pacific Economic Framework that Biden is expected to unveil in Tokyo.

"The Quad is trying to emphasize that it has a positive agenda, which is much more about delivering what the Indo-Pacific region needs, than it is about becoming a NATO-like anti-China entity, which is a reputation it has been trying to combat. in the region," said Kristi Govella, deputy director of the Asia Program at the German Marshall Fund.

The momentum behind the Quad

China's initial rejection of the Quad was based in part on precedent.

An earlier version of the Quad, proposed in 2007 by Japan's then Prime Minister Shinzo Abe, lasted just a year due to diverging interests and pressure from Beijing.

It fell apart in January 2008, when Australia announced its withdrawal from the grouping to strengthen trade ties with China.

But the geopolitical and strategic calculus in the region has changed dramatically in the last decade.

Instead, it has pursued a more assertive foreign policy, easily displaying its economic and military strength.

A year after Xi's inauguration, China began building and militarizing more and more artificial islands in the disputed waters of the South China Sea.

It has stepped up its military posture toward Japan, sending Chinese coast guard ships into the waters around the disputed Senkaku Islands (known as the Diaoyu Islands in China) and flying warplanes into the surrounding airspace.

A Chinese airstrip is clearly visible next to structures and buildings on the disputed Mischief Reef in the Spratly group of islands in the South China Sea on March 20, 2022.

Early in the pandemic, China imposed a series of trade sanctions on Australia after Canberra called for an independent investigation into the origins of Covid-19.

And along its disputed border with India in the Himalayas, Chinese and Indian soldiers clashed in their deadliest conflict in four decades.

The tensions have brought these countries closer to the orbit of Washington, which under Biden has made the strategic rivalry with China a central piece of its foreign policy.

"The biggest driver of the Quad's resurgence is China's growing assertiveness and aggressiveness," said Yuki Tatsumi, co-director of the East Asia Program at the Stimson Center.

"Its behavior not only in the East and South China Seas, but also in the Indian Ocean, up to the Pacific Island area, has made the Quad countries' perception of China more similar."

As Beijing grows further away from the West and its allies, it has drawn ever closer to Moscow, but their "boundless" partnership has become a liability for China as Russia's unprovoked aggression against Ukraine arouses global outrage.

"Beijing's support for Moscow has reconfirmed China's image as a disrupter of the existing international order from which all countries in this region have benefited, and continue to benefit," Tatsumi said.

Although the Quad has never explicitly mentioned China in public, the thinly veiled references are hard to miss.

Last September, when the four leaders met in person in Washington, they pledged to "promote a free, open and rules-based order, rooted in international law and undisturbed", a clear rebuke to increasingly aggressive China in the region.

In response, Chinese diplomats have repeatedly lambasted the Quad for "disturbing regional peace and stability."

"If allowed to continue unchecked, it will bring unimaginable consequences and ultimately push the Asia-Pacific to the brink," he said.

It is not the "NATO of Asia"

NATO's swift and coordinated response to Russia's invasion of Ukraine likely alarmed Beijing, according to experts, who suggest its leaders are watching the Western reaction to Ukraine with an eye to Taiwan.

China regards Taiwan's autonomous democracy as a breakaway province and has not ruled out the use of force to achieve unification.

Tensions between Beijing and Taipei are at their highest point in decades and the Chinese Army is sending a record number of warplanes near the island, a show of force that does not go unnoticed by other countries in the region. .

When Quad leaders met in March to discuss the Ukraine crisis, they agreed that "unilateral changes of the status quo with force like this in the Indo-Pacific region should not be allowed."

Japanese, Indian and Australian ships sail in formation during the Malabar exercises in August 2021.

But Jean-Pierre Cabestan, a Chinese policy expert at Hong Kong Baptist University, stressed that the Quad is not a formal alliance like NATO.

"It cannot be Asia's NATO. What structures the security of the region is a set of bilateral alliances concluded by the United States after World War II: with Japan, South Korea, Australia and the Philippines. So there is no NATO in East Asia," he said.

And unlike Japan and Australia, India is not an ally of the United States, following a foreign policy tradition of neutrality adopted by the country since its independence.

There are also structural differences.

Experts say that in recent years the Quad has moved away from focusing on security issues to include more areas of cooperation, in an attempt to better address regional needs.

At their first virtual summit, held in March last year, Quad leaders pledged to deliver one billion Covid-19 vaccines across Asia by the end of 2022. The Quad has also formed task forces on change climate change, technological innovation and supply chain resilience.

During his trip to Tokyo, Biden is expected to unveil the Indo-Pacific Economic Framework, a long-awaited plan to intensify US economic engagement in the region.

Experts say the framework could drive closer economic cooperation between the Quad countries, for example on infrastructure and supply chain resilience.

From Beijing's perspective, these efforts will likely be seen as a direct challenge.

On Sunday, Wang said that while China is always glad to see proposals that favor regional cooperation, it opposes attempts to create division and conflict.

"Anyone who tries to isolate China with some framework will only isolate themselves. The norms created to exclude China are destined to be abandoned by the events of our time," he said.

But the Quad will have to prove that it can deliver on its promises.

Previous US attempts to boost economic ties with the region, such as the Trans-Pacific Partnership, have failed, and the US will have to convince potential allies and partners that it will maintain its commitment to the region beyond the Biden's term.

Susannah Patton, a researcher at the Lowy Institute in Sydney, said the Quad has already exceeded many analysts' expectations.

"The Quad is a vehicle for (its members) to present a different vision of how the region should function, and to signal to Beijing that it won't do things its way all the time," she said.

"As for the future, its evolution will largely depend on China's behavior. If China continues to undermine regional norms and coerce other countries, the Quad will respond." 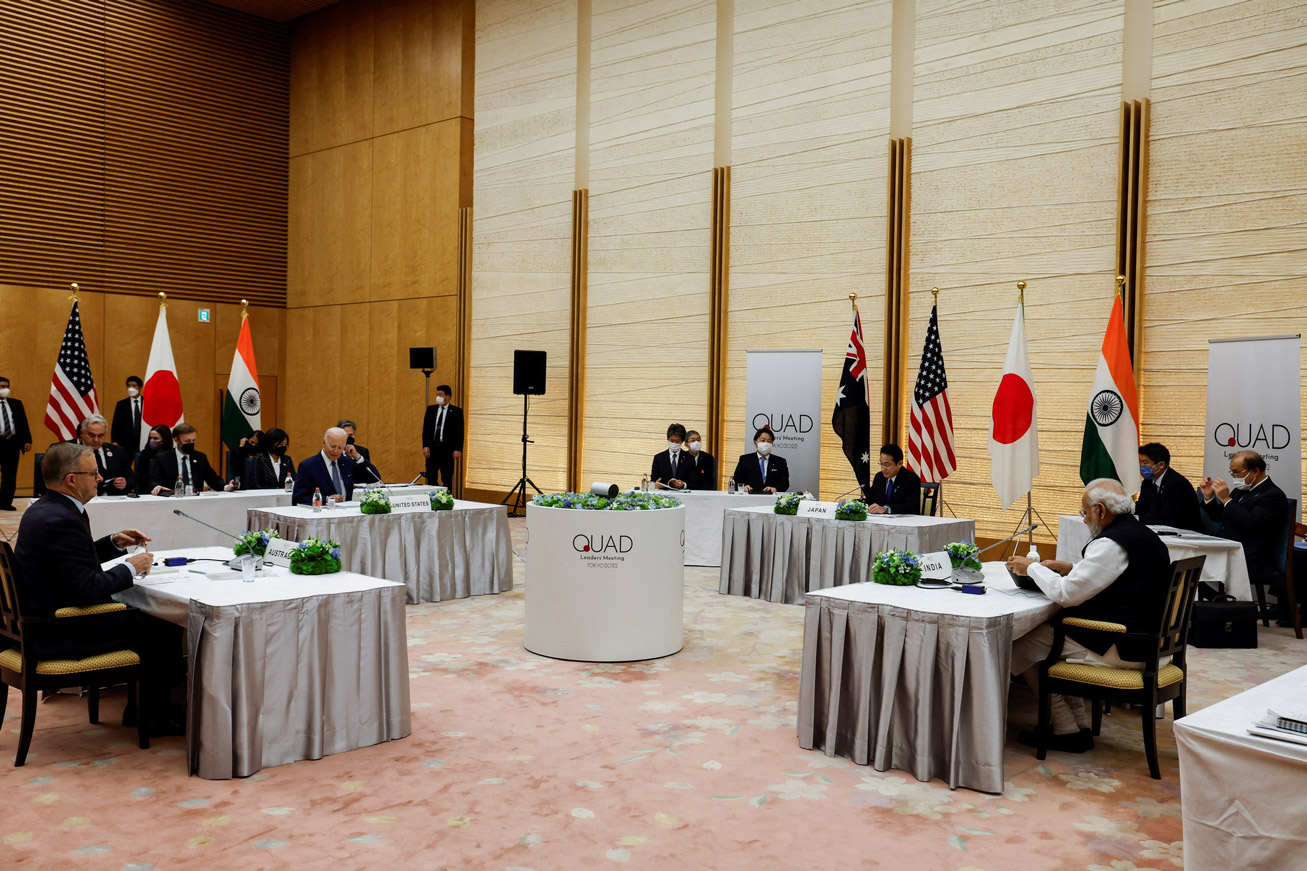 The United States, Australia, India and Japan kick off the Quad summit with an eye on Ukraine 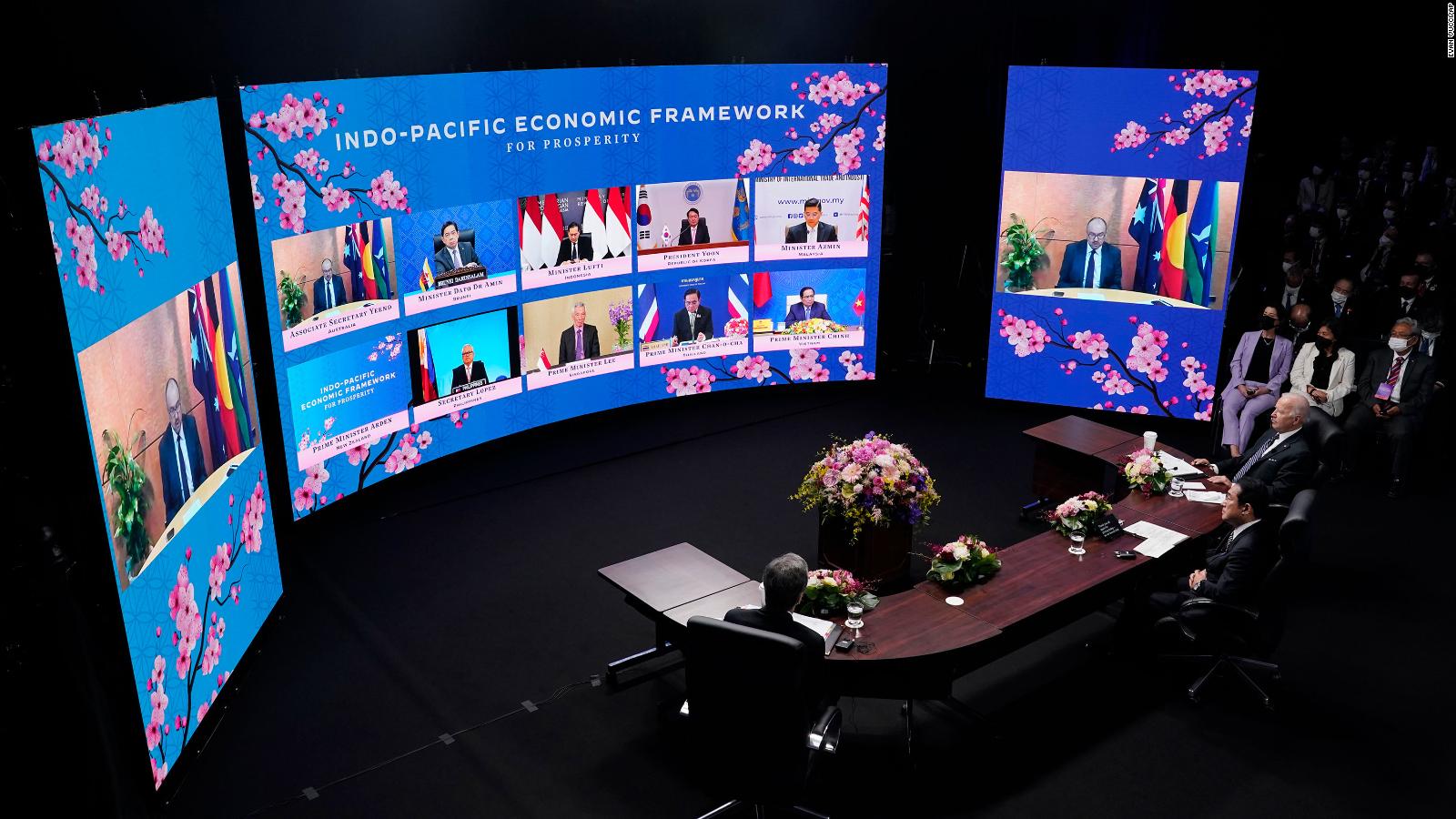 OPINION | Biden should not confuse Taiwan with Ukraine 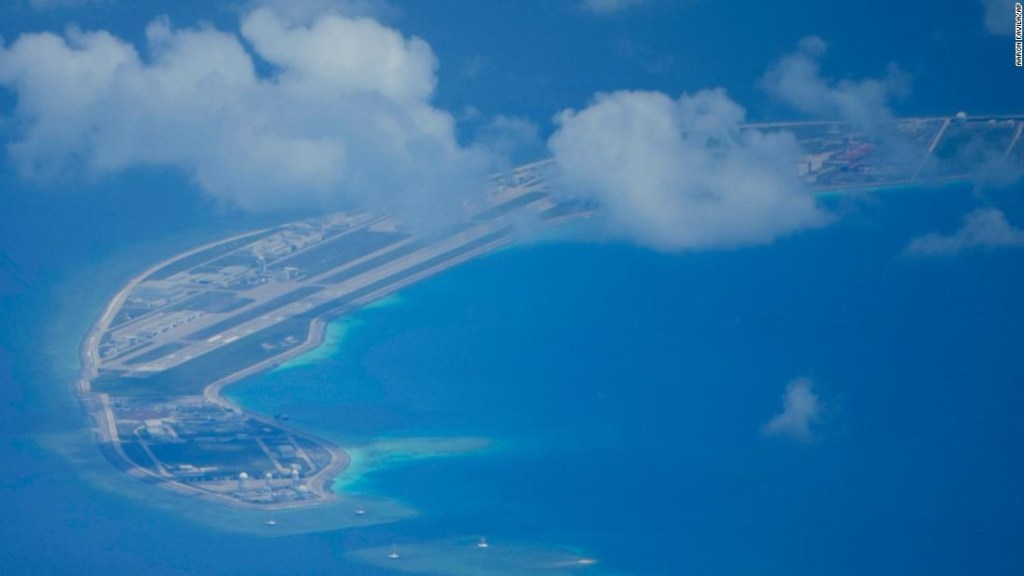 ANALYSIS | China is under alert by the Quad strategic security group, but its warnings only strengthen it 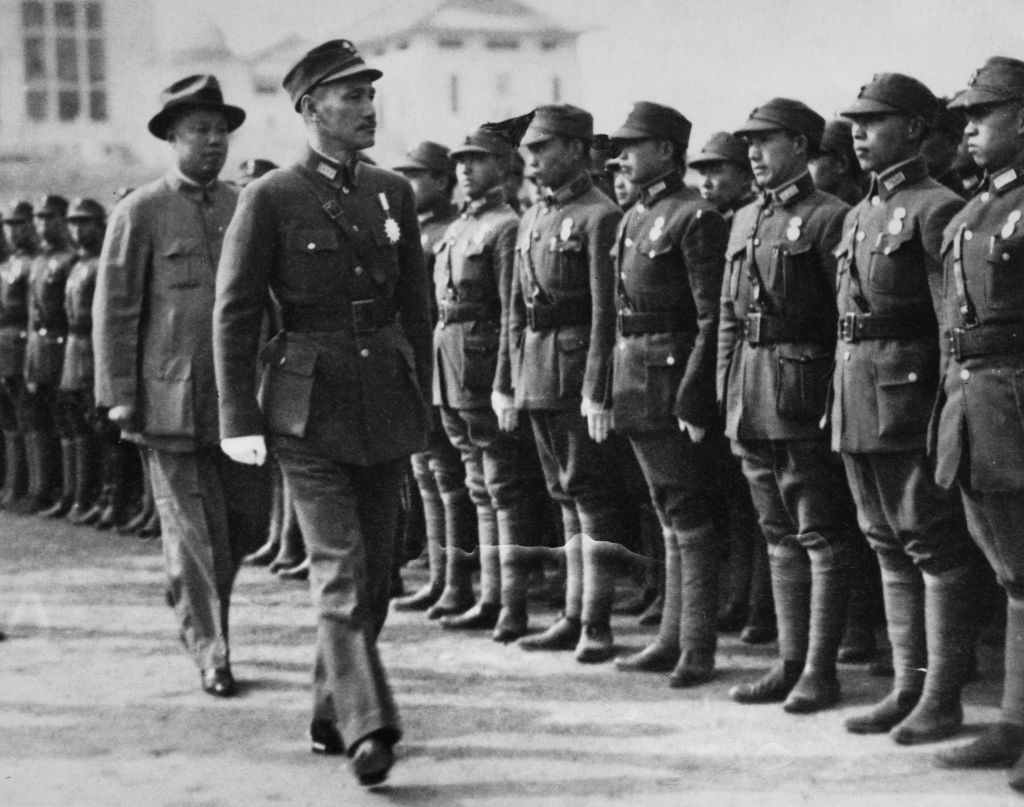 What happens between China and Taiwan? Everything you need to know about the dispute 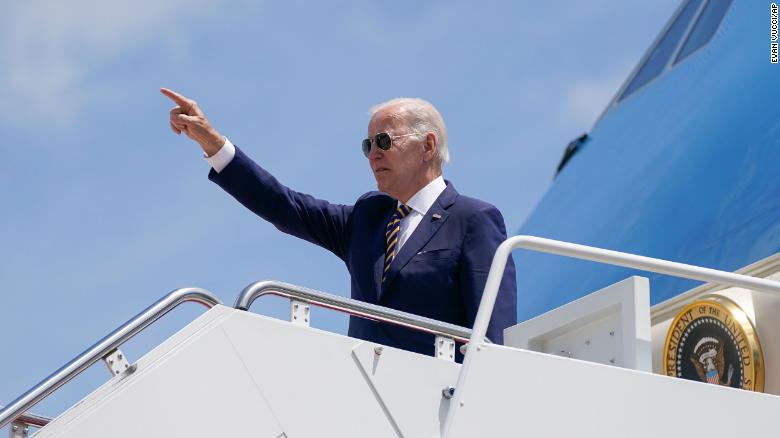 Four against China: Quad alliance wants to ensure freedom of the Indo-Pacific - but they disagree on one issue 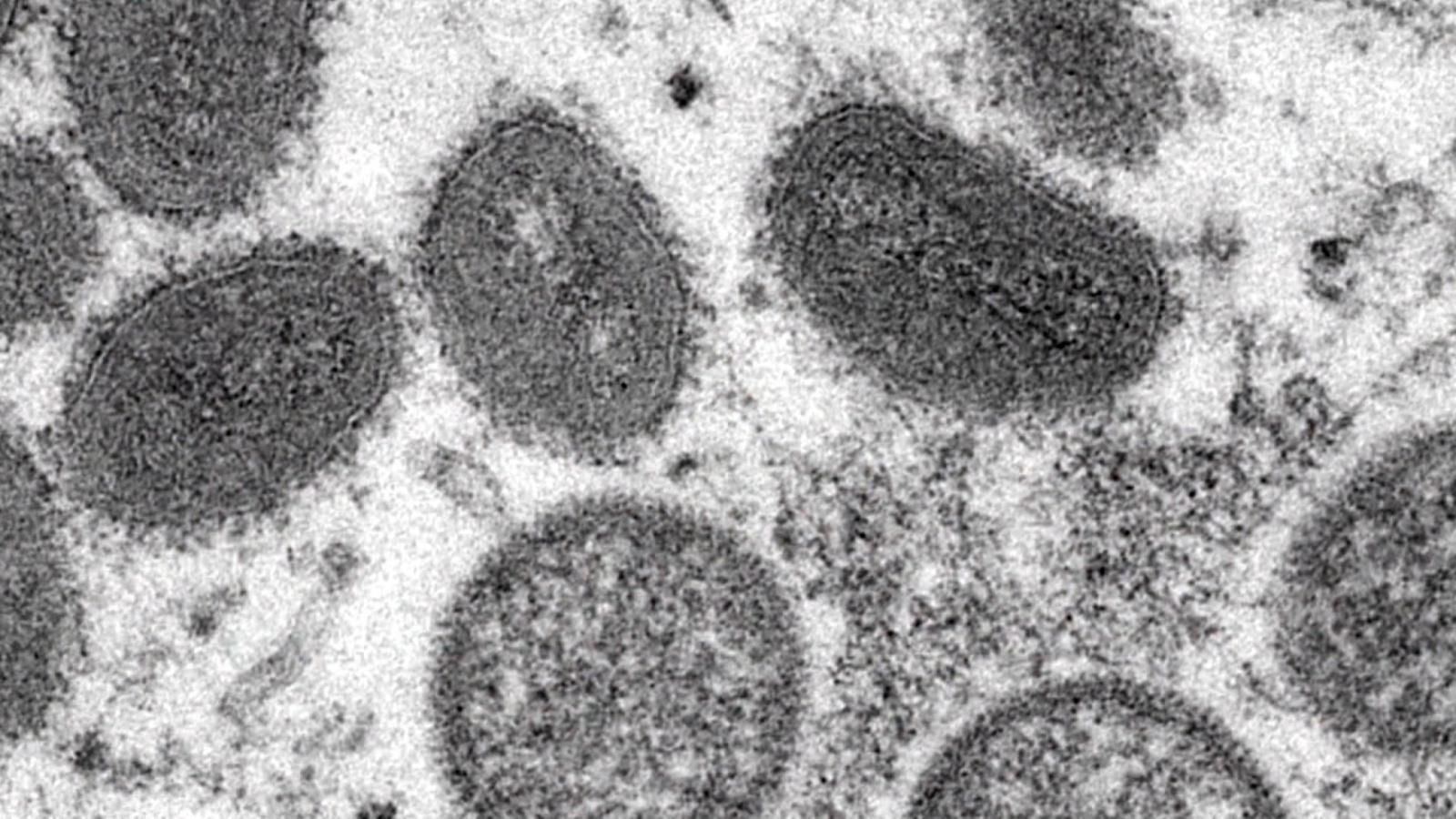 The 5 things you need to know this May 24: What makes monkeypox different 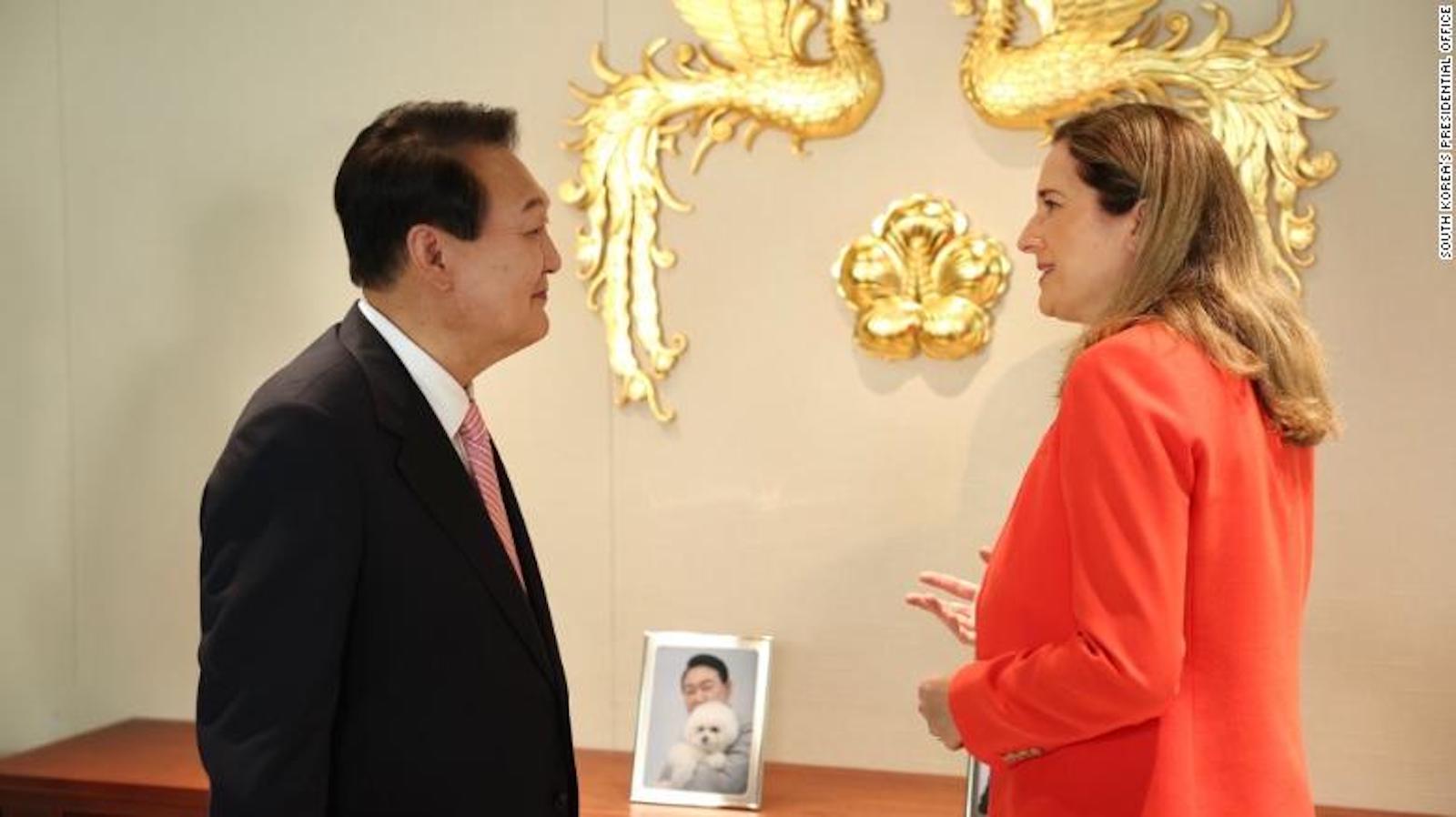 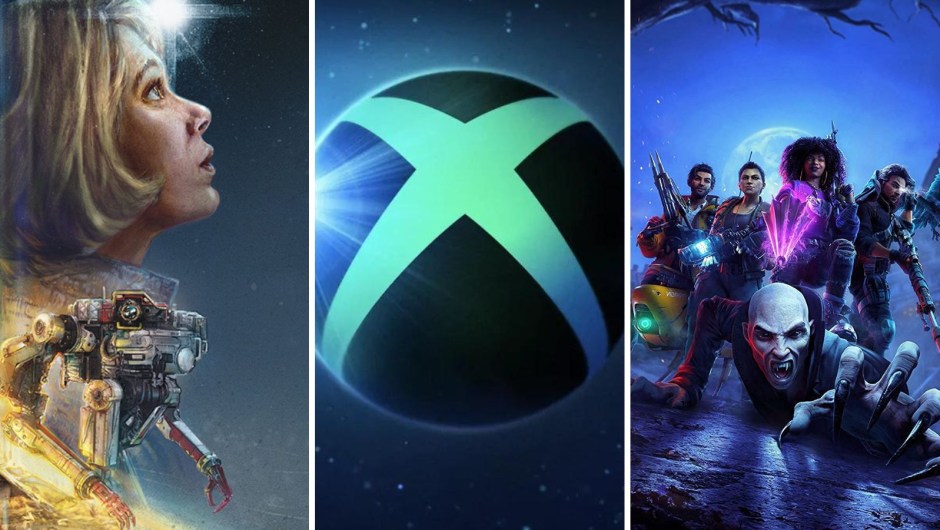 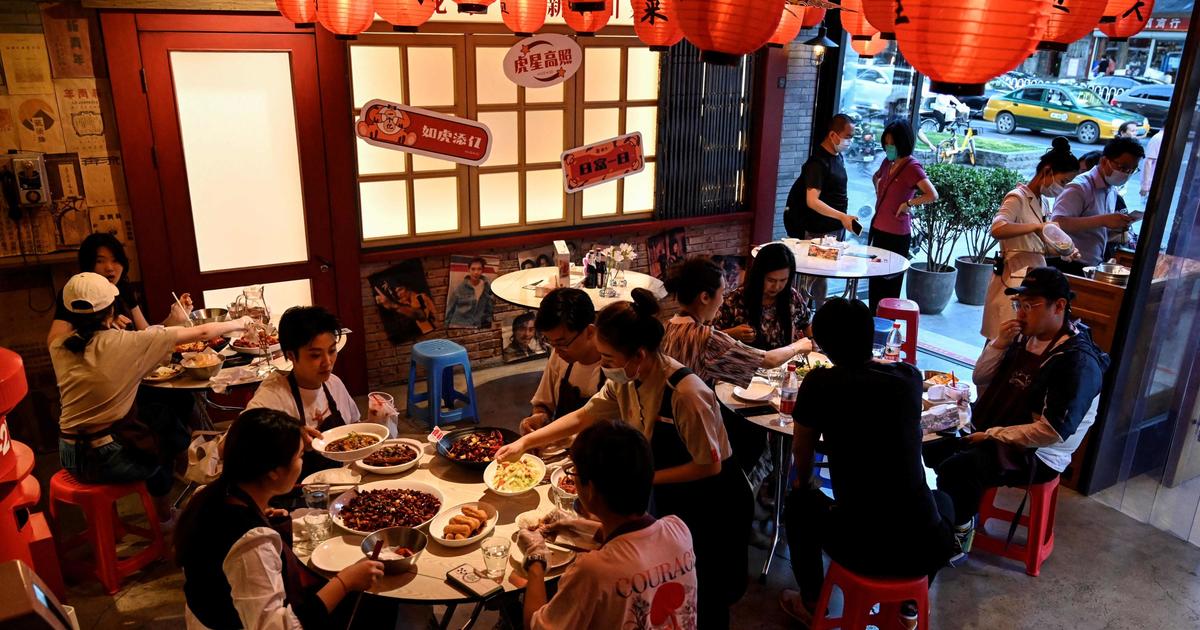 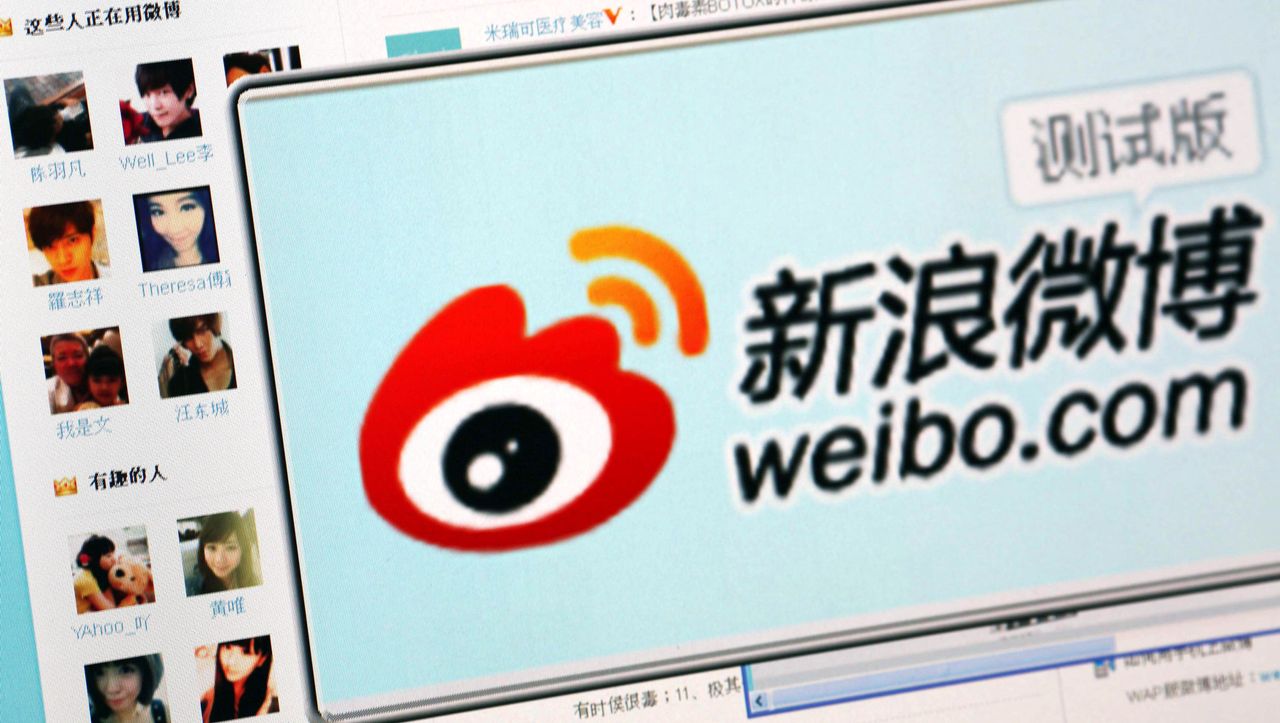 Dragged out of the restaurant: brutal attack on women causes horror in China 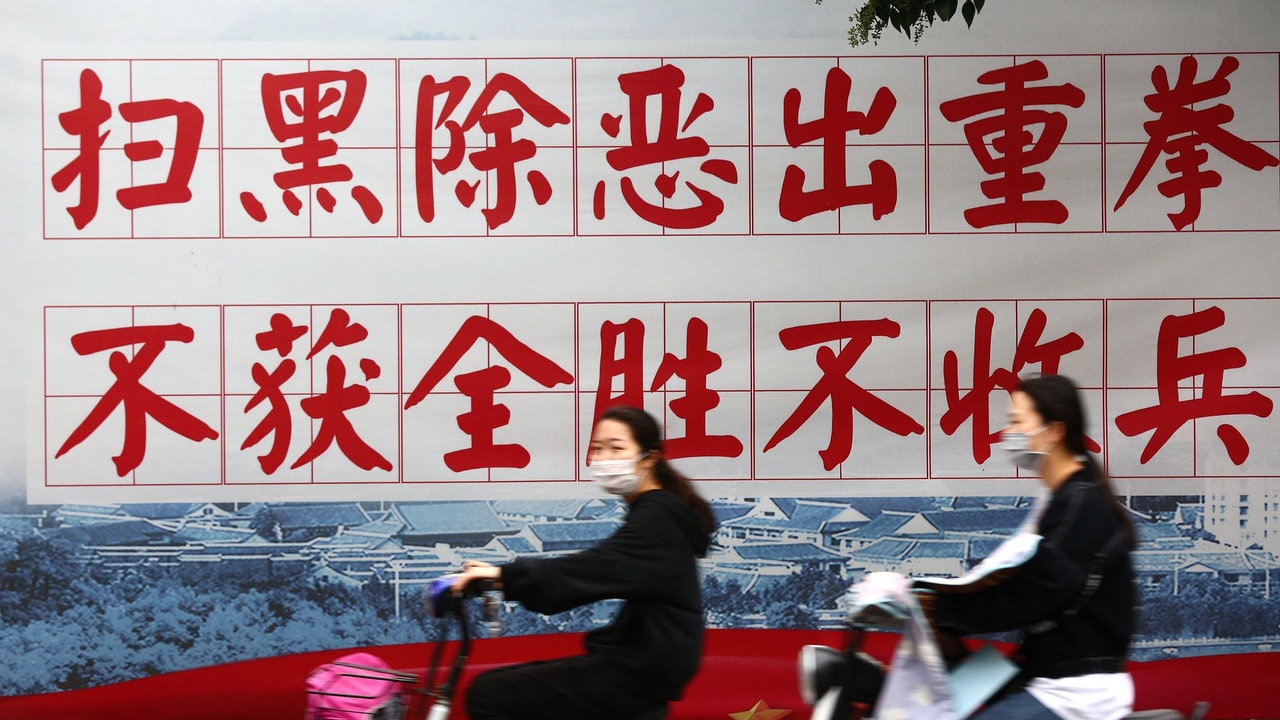 Damascus Governorate: Supplying all means of transportation with the fuel oil designated for them since yesterday evening
2022-06-12T08:56:15.312Z

Farmers of the liberated Idlib countryside begin harvesting wheat in the areas contracted with the Multiplication Corporation
2022-06-12T08:44:11.878Z

Carrie Lam: The media should consciously safeguard national security Li Jiachao: As long as the freedom of the press is not violated
2022-06-12T07:55:56.225Z

Communications announces the end of the deadline for the objection of workers or retirees who are excluded from support through the platform
2022-06-12T07:44:32.562Z