Munich is not Hamburg - Reasons for a quiet G7 demo start Created: 06/26/2022, 17:49 Police officers are looking for shade under a tree at the rally in front of the demonstration of the "Stop G7 Elmau" alliance. © Angelika Warmuth/dpa A big summit meeting in Germany? Many are probably thinking of the Hamburg G20 summit five years ago, which got completely out of hand. In Munich it will be rathe 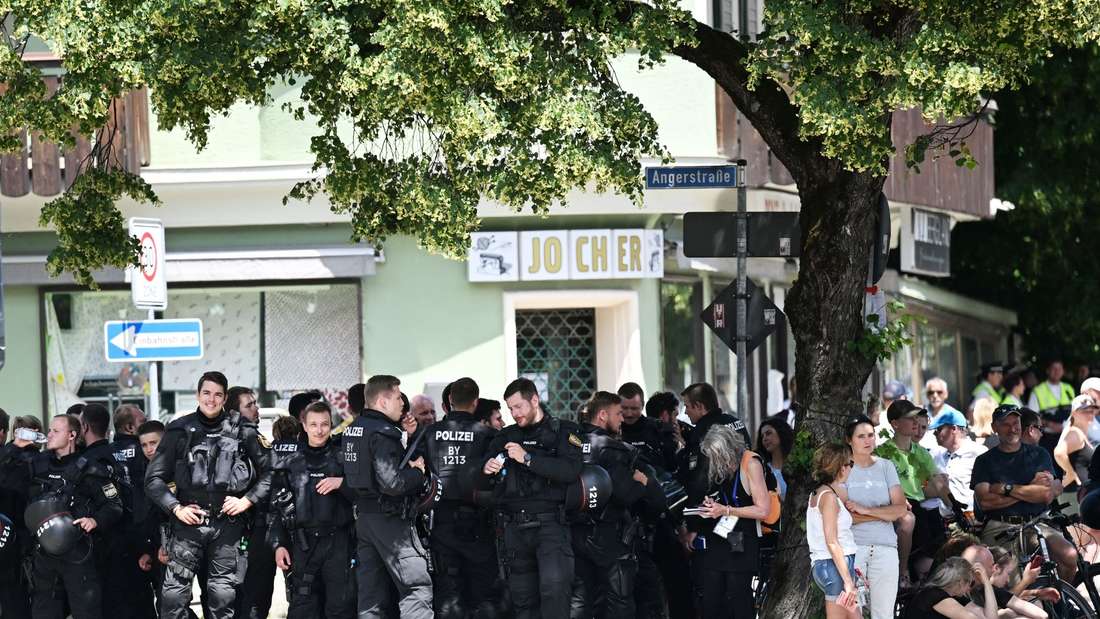 Police officers are looking for shade under a tree at the rally in front of the demonstration of the "Stop G7 Elmau" alliance.

A big summit meeting in Germany?

Many are probably thinking of the Hamburg G20 summit five years ago, which got completely out of hand.

In Munich it will be rather quiet on Saturday - there are reasons for that.

It was to be expected that there would be no riots like five years ago on the Hamburger Schanze in the Bavarian state capital on Saturday before the G7 summit.

But the only about 6,000 participants in the demonstration were surprisingly few - compared to the first G7 summit at Schloss Elmau seven years ago, when almost 35,000 protested in Munich against the meeting of the powerful.

The left-wing “black block” also remained rather a block.

According to the police, 900 participants took part in the largely peaceful march through Garmisch-Partenkirchen, near the meeting place of the powerful in Elmau, on Sunday.

For comparison: in 2015 there were four times as many.

Is this the turning point with the Ukraine war?

Or just the calm before the storm?

1) Munich is not Hamburg

There were already indications of fewer protests than at the 2015 G7 summit.

The mobilization is lower than it was then, the police said in unison in the past few days.

Manfred Hauser, president of the police headquarters in Upper Bavaria South, saw it that way, as did the Munich operations manager and police vice president, Michael Dibowski.

The left-wing scene in Munich and throughout Bavaria is generally weaker.

And: Chancellor and host Olaf Scholz definitely wanted to avoid a Hamburg 2.0.

In 2017 he experienced a bitter surprise as the first mayor at the G-20 summit in the Hanseatic city.

There were violent riots just a stone's throw away from the summit event in the Hamburg exhibition center.

The pictures went around the world.

The fact that everything went picture book-like in Elmau in 2015 may have influenced the choice of the conference location again.

Here, too, pictures went around the world - but precisely: beautiful ones.

2) One peak chases the next

The G7 meeting is right between the EU and NATO summits, which will take place in Madrid immediately afterwards.

The international mobilization could also be influenced by this and therefore be less strong than in 2015, Dibowski suspects.

It is being mobilized primarily nationwide, he says.

Some militant demonstrators from other European countries traveled to the G20 summit.

3) G7 is an anti-Putin meeting this time

Uwe Hiksch, who registered the Munich G7 demonstration, explains the rather disappointing number of participants with the war.

"We have the impression that a lot of people are unsettled by the war in Ukraine," he says.

Especially in the red-green spectrum, which is usually mobilized for the demos, many are currently saying: "Now is not the time to take a counter position to the heads of government." The war overshadows the summit, agrees Annemarieräder from the Bund Naturschutz .

She also cannot really oppose the actions of the G7 against Putin.

"The G7 has to deal with the war of aggression." Classic G7 protest issues such as hunger and climate are pushed into the background by the war.

On Sunday, a spokeswoman for the rally issued the slogan: "We will not let them destroy our planet and our future."

G7 summit in the live ticker: Biden and Macron disturbed when greeting - Scholz gives the first details from talks

4) Neither Trump nor TTIP polarize

At the 2015 summit in Elmau, the "sword of Damocles" TTIP mobilized many people, explainsräder - the free trade agreement where many feared that consumer and workers' rights could get trampled underfoot.

Thorben Becker (50) from Berlin, also from the BUND, also believes that one exciting topic was missing this time.

Donald Trump mobilized his opponents at the G20.

Therese Gmelch, 67, from the communist MLPD, traveled by train from Bamberg.

"I talked to the people in the wagons," she reports.

"But nobody wanted to come here." She believes: "Corona, war, inflation - everything is pouring down on people."

The police have deployed massive forces for the G7 and have practiced crackdowns in Bavaria: Many people know that - including activists.

Some are considering whether to drive off from Hamburg and risk being intercepted in advance or ending up in Garmisch-Partenkirchen in one of the 150 specially set up detention cells - "with flimsy arguments", says York Runte, who runs the action camp in Garmisch -Partenkirchen registered and significantly organized.

The Bavarian authorities have announced that they will remove potential troublemakers.

For three weeks, controls are carried out at German borders with neighboring countries.

Checks are not only carried out on roads, but also on trains and hiking trails.

Only the autonomous ones were masked at the demo in Munich.

Nevertheless, the fear of the corona virus and the summer wave could have spoiled some people's desire to protest.

Another aspect: In Corona times, only lateral thinkers took to the streets in large numbers.

The demonstrators for a better world may have to warm up again after the two years of the pandemic.

Speaking of warm: Was it because of the summery weather?

Probably not, because a demo is always more pleasant in sunshine than in continuous rain.

The police had said in advance that in good weather one could even count on more than 20,000 registered demonstrators.

Nevertheless, it cannot be ruled out that some had other plans because of the sunshine: "It is very hot, many are perhaps at the lake",

7) The trend is towards smaller and more regional

York Runte, who registered the action camp in Garmisch-Partenkirchen, points out that there are rather smaller rallies, especially when it comes to the climate.

“In my opinion, large demonstrations are decreasing.

The whole thing is becoming a bit more regional and flexible.” Another reason for the G7 summit is the short preparation time of just over six months.

"If someone already had certain plans for 2022, then not everyone will drop their original concept," says Runte. Little interest in the G7 demo in Munich: participants disappointed