Zelenskyj speaks of thousands of liberated places - and also praises the West for "strong results" Created: 08/07/2022Updated: 08/07/2022 09:32 By: Bedrettin Bölükbasi In the Ukraine war, Russian troops and equipment are probably gathering in southern Ukraine. According to Kyiv, Iran is supplying drones to Russia. The news ticker. Russia reports more than 400 dead Ukrainian soldiers after arti In the Ukraine war, Russian troops and equipment are probably gathering in southern Ukraine.

According to Kyiv, Iran is supplying drones to Russia.

, this was announced by Volodymyr Zelenskyj on Telegram.

However, most places would need to be demined and rebuilt.

The information could not initially be independently verified.

The Ukrainian president praised his forces for successful counterattacks and "strong results" in destroying Russian wartime logistics - emphasizing the role of Western weapons in the process.

Zelenskyy thanked western partners for previous arms deliveries, referring in particular to the USA: "Any attack on the enemy's ammunition depots, on his command posts and on accumulations of Russian technology saves all of our lives, the lives of Ukrainian soldiers and civilians," he said.

The Ukrainian army is coming under increasing pressure in the eastern region of Donetsk - but according to its own statements it has initially fended off all Russian advances.

Picture taken on August 5: A Dnipro-1 soldier stands guard in the Donetsk region.

Ukraine-News: Pressure in the Donetsk region is increasing

The Ukrainian General Staff reports that the armed forces in the defense of the Donetsk region are coming under further pressure.

However, successes have also been achieved.

According to their own statements, all Russian advances were repelled for the time being on Saturday.

Russian offensives in the direction of the cities of Sloviansk, Bakhmut and Avdiivka had been repelled, the Ukrainian general staff said in its evening report.

Fierce fighting has been raging around Bakhmut in particular for days.

The day before, the pro-Russian rebels had reported that fighting was already taking place within the city limits.

The information provided by both sides cannot be checked independently.

The small town is considered a cornerstone of the defense system surrounding the last Ukrainian-held metropolitan area in Donbass.

Should Bakhmut and other small towns fall, the way for the Russian troops would be largely free in the direction of Sloviansk and Kramatorsk.

The Russian military claims to have killed almost 600 Ukrainian soldiers with air and artillery strikes.

"Near the village of Bilohirka in the Kherson region, the temporary base of the 46th Ukrainian air assault brigade was hit by airstrikes and artillery fire," said Russian Defense Ministry spokesman Igor Konashenkov.

More than 400 "nationalists" were killed.

In addition, more than 70 other soldiers were killed and 150 injured by rocket attacks on the front in Cherson.

More than 80 "foreign mercenaries" died in rocket attacks in the Dnipropetrovsk region.

Konashenkov also reported on the destruction of several artillery systems in Ukraine.

A battery of Olcha and Himars rocket launchers was destroyed.

The information cannot be independently confirmed.

"Today he was flown from Crimea to Moscow in an artificial coma on a special plane," reported the Russian Telegram channel Baza.

Saldo is in Moscow's Sklifosovsky Institute for Emergency Medicine - a special clinic that also specializes in poisoning.

He was initially hospitalized with suspected heart attack and stroke, but the suspicion was not confirmed.

Instead, the doctors expressed the suspicion that he had been poisoned.

His health deteriorated rapidly over time, putting him in a coma.

Saldo is considered one of the main targets of Ukrainian partisan activities.

According to information from Kiev, the Russian troops are attacking Bakhmut with all severity, a cornerstone of the defense system around the last Ukrainian-held conurbation in the Donbass.

"The enemy is launching an attack on Bakhmut, fighting continues," the Ukrainian general staff said in its situation report.

The day before, the pro-Russian rebels had reported that fighting was already taking place within the city limits.

The information provided by both sides cannot be checked independently.

The Ukrainian line of fortress Siwersk - Soledar - Bakhmut is now beginning to falter in several places.

Russian troops are also in front of Siwersk and Soledar.

However, the heaviest fighting is currently taking place around the Bakhmut traffic junction, which the Russians are shelling with artillery and tanks.

The fighting is also continuing in front of the former regional capital of Donetsk, which has been in the hands of pro-Russian separatists since 2014.

In the area of ​​the small town of Avdiivka, north of Donetsk, there had been several attempted attacks that had been repelled, the general staff reported.

In the south of the country, on the other hand, the initiative is passed to the Ukrainians.

There, the Russian troops concentrated on defending their positions in the occupied territories, according to the situation report.

The Southern Command of the Ukrainian military previously reported that it had destroyed at least six Russian arms and ammunition depots and two command posts in the Kherson region.

There is no independent confirmation for this information either.

Munich – In the Ukraine war, a counter-offensive by Ukrainian forces is taking place in the south of the country.

Kyiv aims to retake the Kherson region, which had already been lost at the beginning of the invasion, from the troops of Russian ruler Vladimir Putin.

According to the British Ministry of Defense, Russia could now have new plans for the south.

Russian troops would "almost certainly" gather in the south, the British intelligence update said on Twitter.

The reason is either the Ukrainian counter-offensive or the intention of the Russians to launch a new attack in the region.

These are long convoys of tanks, artillery and other weapons that Moscow is sending to the south-west.

In addition, Russia will most likely send battalion combat groups from Crimea, among others, to the Kherson region.

According to the British MoD, Kyiv is also targeting the strategic rail link between Crimea and Kherson.

The ministry in London also announced a "new phase" in the war: the heaviest fighting would now gradually take place in a 350-kilometer front line from near Zaporizhia to Kherson.

Apparently Iran has already supplied Russia with drones in the background of the Ukraine war.

This was announced by the US think tank "Institute for the Study of War" (ISW), citing the adviser to the Ukrainian President Volodymyr Zelenskyy, Oleksiy Arestovich.

According to the Ukrainian diplomat, Tehran has already delivered 46 drones.

According to the ISW think tank, these are at least partly “Shahed 129” drones.

According to the think tank, Russia could use these to attack American Himars multiple rocket launchers.

It remains unclear whether Iran delivered more drones than just 46.

So far, Ukraine has relied on drones.

The Turkish Bayraktar TB2 in particular was used to great effect. Attacks on civilians "part of the war system"? Expert expresses suspicion: “Russians are trimmed for it”

Attacks on civilians "part of the war system"? Expert expresses suspicion: “Russians are trimmed for it”

Attrition tactics of Putin? According to experts, Russia is launching militarily meaningless counterattacks

Putin's "bloodhound" now issues urgent warning: "There will be an offensive" 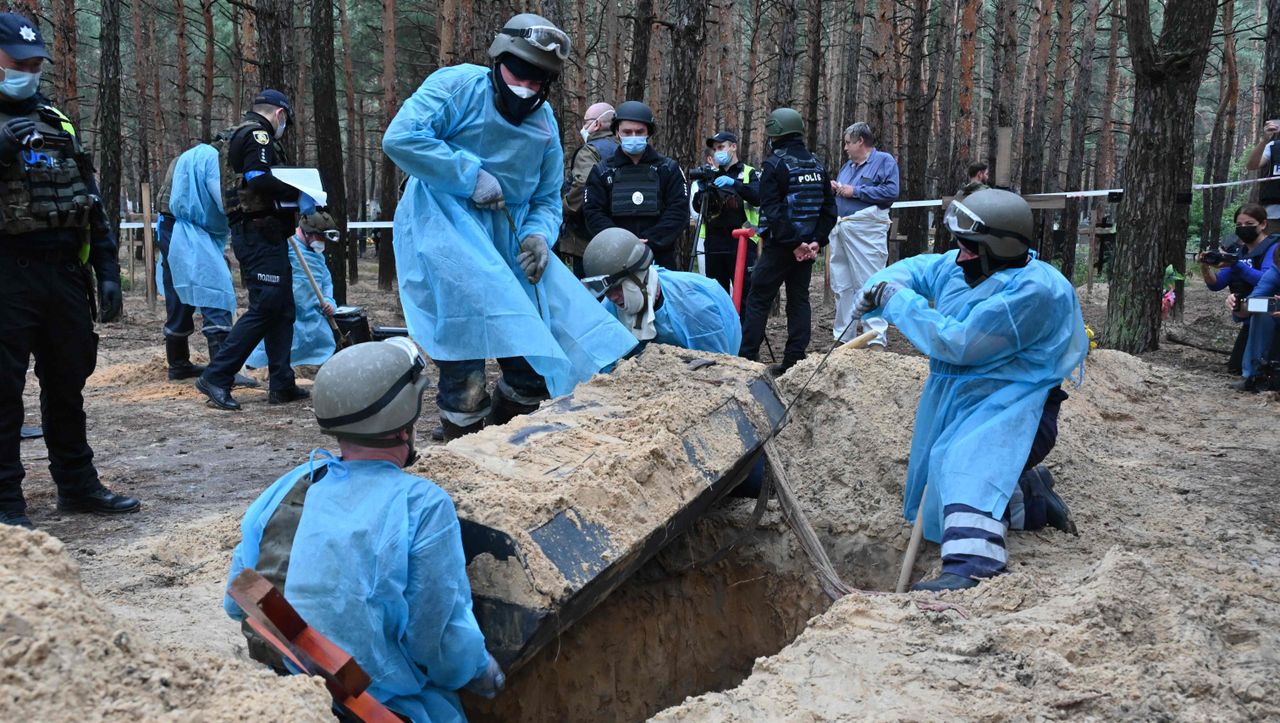 Selenskyj speaks of a "mass grave" in Izyum