How Putin wants to destroy Ukrainian culture - and what the West can do about it Created: 08/09/2022 05:47 From: Foreign Policy Fight against army and culture: Russian attack on a residential area in Kharkiv. © Daniel Ceng Shou-Yi/dpa Russia is trying to erase Ukrainian identity. The West must support those working to preserve it - the sooner the better. For Ukraine, the war against Russia is Fight against army and culture: Russian attack on a residential area in Kharkiv.

The West must support those working to preserve it - the sooner the better.

Berlin – Russia's war against Ukraine is being waged with tanks, grenades, trenches and terror.

Central to this are propaganda, intimidation, false reporting and a campaign of cultural annihilation.

For Ukrainians, clinging to their national identity, history and culture is at the heart of a tenacious resistance.

At a time when international conflict touches on issues of ethnicity, national identity, language and history, culture is not just caught in the crossfire.

She herself is a battlefield.

Russian President Vladimir Putin has not focused his campaign against Ukraine solely on conquering territory or suppressing resistance.

He also wants to subjugate Ukraine culturally, linguistically and territorially to Russia and deny it its existence as a sovereign, independent nation.

Ukraine war: For Putin, the country belongs to Russia

In a televised address that started the war, Putin denied that Ukraine had ever had "real sovereignty."

He described the country as part of Russia's "own history, culture and intellectual space." The history of Russia and Ukraine is closely intertwined.

However, their societies, traditions and artistic forms are shaped by different and unique guiding principles that have stood the test of time and have become even stronger during Ukraine's independence since 1991.

Unlike Russia's one-party state, where Putin has ruled since 2000, Ukraine has 349 different registered political organizations vying for influence at the last count.

There have been five different Presidents in the last 20 years.

While Putin's attempt to disguise his expansionist drive under the guise of national cohesion met with little approval in the West and fierce opposition in Ukraine, it was better received elsewhere.

His propaganda offensive has helped many Latin American, African and Asian countries stay out of the conflict.

This is consistent with their stance of blaming the United States and the West for global unrest.

War in Ukraine: The Russians succumb to the constant propaganda of the state media

The collective restraint of these countries has weakened international sanctions aimed at Russia's economy and has backed Beijing to remain on Putin's side.

Above all, however, Putin's view of things has prevailed in Russia.

Putin's portrayal, tirelessly promoted by the state-controlled media, has helped sell the costly war at home.

Polls (as far as they can be relied on, given the risks Russians face in voicing their opinions; as of May 2022) show overwhelming Russian public support for the failed military invasion.

By shutting down independent media, labeling dissidents as foreign agents, and banning civil society organizations, Putin solidifies his version of geopolitical events as the basis for continuing the Ukraine war.

Many who disagree have simply left the country, including journalists, writers and artists.

Fight against national identity: Other countries are also taking action

Putin is not the only authoritarian ruler who has targeted culture.

The Chinese government has long waged a campaign to erase Uyghur cultural and national identities in order to repress a troubled region and maintain territorial hegemony.

In addition to mass incarceration of Uyghur citizens in re-education camps that attempt to instill Chinese national dogma and pride, Beijing has targeted Uyghur writers, scholars and artists.

The culture was subverted as criminal.

Those who write about Uyghur traditions, values ​​and communities are accused of inciting ethnic hatred or advocating separatism.

Beijing's long-running campaign of "Sinicization" in Tibet also aims to wipe out the region's language and religion, including by forcing children into Chinese boarding schools.

In Hong Kong, too, China is trying to smother the embers of democracy with an aggressive attack on the island's culture.

Beijing is in the process of replacing the Cantonese language with Mandarin, which must be taught in schools.

Paintings and sculptures are removed from public view and academic and press freedom dwindles.

And so it is elsewhere in the world.

In Afghanistan, the Taliban are destroying what remains of the young, vibrant society that took root after its fall two decades ago, when access to education expanded, artistic expression flourished, and scientists and writers were free to take risks.

Amongst the onslaught of desperate Afghans who fled the country last year were hundreds of writers, intellectuals and artists who were directly targeted and forced into exile or hiding in the wake of the Taliban advance.

In Myanmar, too, a decade of artistic and cultural flourishing that came with the end of junta rule has given way to a new oppression from which cultural luminaries have fled or faced arrest, detention or, in some cases, state-sanctioned torture and killing .

Traditional approaches to preserving culture in times of war have tended to focus on tangible, physical manifestations of culture—the protection of works of art or artifacts.

During World War II, the "Monuments Men" - curators, art historians, librarians and artists - banded together to save cultural treasures threatened by Nazi attack.

In recent years, UNESCO has worked to protect antiquities in Mali, Syria and Yemen.

The US Department of State's Ambassadors Fund for Cultural Preservation protects objects, works of art, and manuscripts endangered by natural disaster, conflict, or neglect.

This type of work remains vital, including in Ukraine, where Russian forces bombed the memorial to the 1941 Babi Yar massacre, targeting a nearby TV tower.

Since the start of the war in Ukraine, the Kharkiv State Academic Opera and Ballet Theater has been reduced to rubble, along with 120 other cultural sites, including museums, historical buildings, libraries and religious institutions, according to UNESCO.

But international responses to cultural obliteration as a weapon of war need to improve to keep up with the world's autocrats.

One way is the digital preservation of historical and cultural treasures.

Since the 2013-2014 Maidan protests that toppled Moscow-backed Ukrainian President Viktor Yanukovych, Ukraine has declassified reams of documents on Soviet repression.

At the beginning of the war, historians and archivists took some of the papers to safety.

Ukraine war: did the Russians set fire to the archives of the Ukrainian security service?

The Russians have reportedly set fire to the archives of the Ukrainian Security Service in Chernihiv, which house Nazi-era documents related to the extensive KGB activities in Ukraine.

The United States and its allies, along with UNESCO and private donors, should digitize cultural archives threatened by conflict.

After archiving, the copies of the materials should be kept safely abroad so that they cannot be totally destroyed.

Securing these cultural artifacts for posterity would help complicate, and even prevent, efforts toward cultural extinction.

Culture encompasses much more than just relics and records from the past.

The sophistication of Putin's well-equipped and globally tailored information warfare demonstrates the central role of communication and cultural projection as tools of modern warfare.

Global cultural institutions have spontaneously tried to meet this challenge by including Ukrainian artists in their programs and presenting their works.

When nations under attack are offered intelligence and material support, they should also be given funds for cultural protection and their own information warfare.

Such efforts should not only draw on government messages, but also seek out authentic, independent voices whose work and messages can be amplified and shared.

Investing in translation, video and audio production, and international travel by cultural workers visiting foreign capitals and engaging with the media can help counteract disinformation by proving the cultural integrity of oppressed peoples and nations.

Cultural influencers have the greatest impact when they can stay in the country.

Almost all of PEN Ukraine's 140 writers managed to stay within the country's borders throughout the conflict.

Some are fighting at the front, while others have relocated.

These writers realized that by going into exile they risked losing some of their power as chroniclers of the conflict, able to describe the invasion and resistance in the eyes of the world.

Writers in Ukraine found their normal sources of income from public speaking and writing dried up.

They, and also those who have been displaced or forced to leave the country, will need means to continue to express themselves creatively.

For writers, artists and dissidents in exile, reintegration assistance from universities, arts institutions or cultural organizations can mean the difference between continued influence and having to reinvent their lives from scratch, sometimes as an Uber driver or restaurant worker.

Supporting organizations that coordinate and support creative communities in the midst of conflict can be an important form of resistance.

Grants and scholarships can help to empower displaced people and support their eventual return home.

The growing number of exiled writers, artists, thinkers and activists from Afghanistan, Hong Kong, Myanmar, Belarus and now Ukraine and Russia makes it an opportune time for Western governments and NGOs to create new tools to help the displaced - both as a mouthpiece for oppressed cultures and as a catalyst for new visions of the future.

Strengthening the cultural spheres cannot wait until the bombs are gone.

Putin is learning the hard way in Ukraine that men, machines and macho attitudes may not be enough to win a war.

At the same time, the traditional instruments of promoting and defending democracy are beginning to falter in the face of authoritarian expansionism.

While a strong culture is not an indicator of national strength, it can be an important source of inspiration, belief and vision for a better tomorrow.

Ukrainians are struggling not only for their survival or supremacy, but also for identities, ways of life, autonomy and traditions.

As Russia and China become more eager to weaponize culture, the West and those who believe in open societies must become more adept at mobilizing culture as a source of defense.

is the CEO of PEN America and a member of the board of directors of Facebook.

Previously, she was Deputy Assistant Secretary of State for International Organization Affairs at the US Department of State.

This article was first published in English in the magazine "ForeignPolicy.com" on May 16, 2022 - as part of a cooperation, it is now also available in translation to the readers of the IPPEN.MEDIA portals. 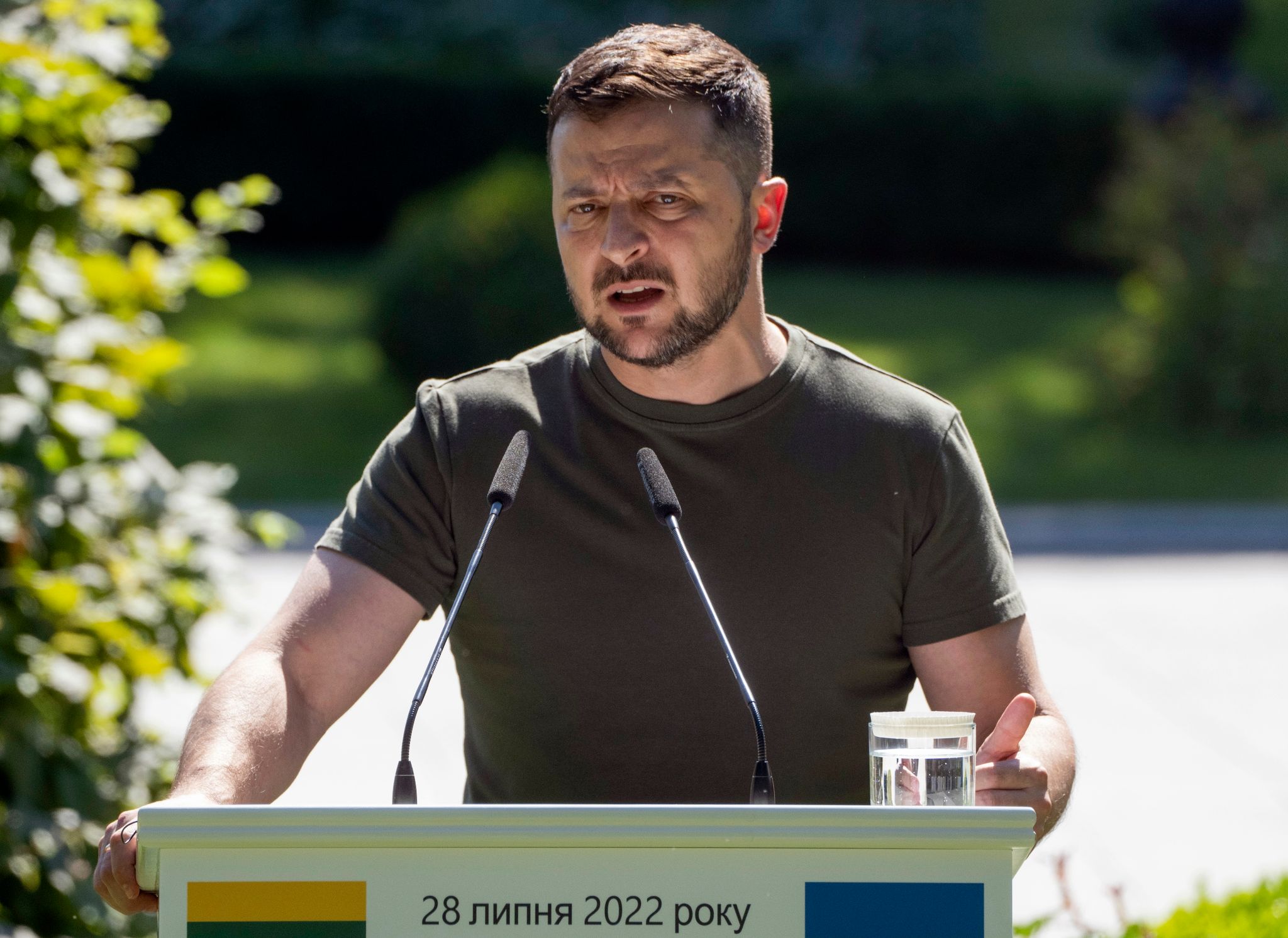