Galicia, Castilla y León, Extremadura, Andalusia, Catalonia or Navarra already suffer from lack of water. The reserve falls to 39%, the lowest percentage since the great shortage of 1995.

Spain has been officially installed in the drought.

Spain's water reserve has fallen this week to 39.2%, the lowest level since 1995, the year in which severe restrictions on human consumption were imposed and agriculture collapsed.

The situation is more serious in Galicia, Castilla y León, Extremadura, Andalusia, Catalonia and Navarra due to the scarcity of water resources, but areas of the Duero and Ebro basins have also entered an emergency scenario, while the cuts of water spread.

And there is no prospect of improvement: it will continue to be hot as it should be in summer, it is not expected to rain intensely enough in the coming quarter and the reservoirs are falling rapidly because there is a lot of tourism and agricultural irrigation is skyrocketing , precisely to try not to lose the crops.

The one from the Ministry of Ecological Transition is that irrigation and “minor systems” of human supply will be greatly affected, although “it is not foreseeable that there will be major problems in maintaining supply” in large cities.

And Greenpeace's is that the situation is going to get worse, because some reservoirs can no longer extract the water they store.

because some reservoirs can no longer remove the water they store.

because some reservoirs can no longer remove the water they store.

Lindoso Reservoir (Concello de Lobios), which already had a very low level of capacity on August 4 due to the drought that has been occurring in the autonomous community in recent months and that is causing restrictions on the use of water in Galicia. OSCAR CORRAL

of the Ministry of Ecological Transition.

The persistence of temperatures above 40º, evaporation and evapotranspiration (loss of moisture by evaporation in soil and plants), the increase in irrigation and the fact that the demand for water has not stopped growing (especially when Spain is full of tourists ) are to blame for reserves falling weekly by more than one percentage point.

"And the data will be worse, because there are reservoirs that are clogged with sediment and have less water than is officially allowed and in others it cannot be extracted because they are around 10% and the intakes are higher," Julio explains. Barea, hydrogeologist and head of the Greenpeace water campaign.

The August with the least reservoir water of the millennium: the reserve drops up to 1.5% weekly as consumption and evaporation skyrocket

Drought, in any case, "is consubstantial" to the Mediterranean climate.

The "pertinacious drought", which was said during the Franco regime, especially after those suffered in the 40s and 70s of the last century.

“In Spain there have been droughts, there is a drought and there will be droughts.

However, climate change accentuates these events”, admits the ministry.

In fact, they are periodic.

Last year it rained 5% less than normal and the first five months of this hydrological year were "quite dry".

In this way, in February the word drought was already being considered, but the intense rains in March gave some hope.

"May and June were once again very dry, which has caused a worsening of the situation, especially in the Guadalquivir and Guadiana demarcations," according to sources from the General Water Directorate.

"The rains made everyone forget and we didn't restrict the use of water in time," adds Barea.

The accumulated rainfall so far this year is 447.7 millimeters, when the average of the historical series since 1981 indicates that it should be 574 at this point in the summer.

And the prediction is that it will not rain with sufficient intensity in the coming months, since the Aemet does not expect abundant rains until well into October.

And all without counting the water used in hydroelectric production (177 hectometers only this last week).

The rains in the form of storms that are expected for this week will not serve to alleviate the state of things either.

The situation of lack of water has worsened in the districts of Guadiana and Guadalquivir, vital for Andalusia and Extremadura, whose reservoirs are at 25.8% and 24.2%, respectively, of their capacity.

This last basin has been on alert since June and has 19 reservoirs on alert, three in an “emergency” situation (Sierra Boyera, Martín Gonzalo and Dañador) and only three of the 25 in the system are normal.

Melilla's supply, which depends on this body, is on pre-alert.

The Guadiana Hydrographic Confederation, which limited water for agricultural use at the beginning of the year, has six points in emergency and the situation is the most critical in this century, according to demarcation sources.

Navarra has been declared in drought,

The reservoirs of the Tajo Hydrographic Confederation are also in an “exceptional” situation, or at level 3, and the perspective is that they remain in this state “for the rest of the semester”, explained on Tuesday the authorization published in the BOE for send 10 hectometers from the Entrepeñas-Buendía reservoirs to the Tajo-Segura transfer system in the current month of August.

The situation is such that, "taking into account the consumption of supply and irrigation estimated in the coming months, the reserves would run out in just over two months."

However, a basin is not declared in drought until the entire system is, explains Greenpeace.

"A basin like the Duero cannot be declared in drought, as was done in 2017, because all the subsystems of the basin would have to be in drought."

This is the case of the enormous Yesa reservoir, which supplies Aragón and Navarra, which is below 39% of its capacity.

The drought stain is reaching areas where water scarcity seemed unlikely, such as Galicia or the Basque Country.

The Miño-Sil system already has two reservoirs on alert, but the problem of the aforementioned communities is that many areas are not usually supplied by swamps, but by local rivers and wells.

In fact, there are already almost 400,000 Galicians from fifty municipalities who are suffering cuts in supply because those sources have dried up.

Meanwhile, the Biscayan town of Bermeo is preparing to receive two million liters of water per day by ship because the rivers and springs from which it usually supplies have dried up.

💧The Spanish water reserve is at 39.2% of its capacity

The Government fears that the problems will begin to spread in agriculture, especially in irrigated agriculture, since giving water to humans takes precedence over giving it to plants.

In Malaga and Granada, for example, avocado and mango trees are already being uprooted because there is no supply to wash them down.

One of the reasons is that the La Viñuela reservoir in Axarquia has so little water that it is considered dead, falling to around 11% of its storage capacity.

In fact, if the rains do not remedy it, irrigation will be "the sector potentially most affected by the drought and the scarcity of water resources, since the supply has preference in the water distribution systems", consider sources of Ecological Transition.

"The situation is serious because, in addition, it continues to be irrigated, as I have just seen in many fields in Castilla y León, where they were irrigating large areas with pivots [propelled equipment that supplies rain]," says hydrogeologist Julio Barea.

Greenpeace assures that despite the fact that climate change is warning that it will rain less and less, all basin plans include an increase in irrigation.

“In Spain there are already four million hectares of legal irrigation, and in Andalusia, especially in the Guadalquivir basin, 87% of the water goes to irrigated agriculture.

And there are strange things.

How is it possible that the olive grove, which is rainfed, takes 700 hectometers a year [the equivalent of the water consumed this past week in Spain]?” asks Barea.

Headwaters of the Aracena reservoir in the municipality of Carboneras, Huelva. PACO PUENTES

The current drought situation has led to the review of the current Special Drought Plans, approved in 2018, scheduled for the end of 2024, being brought forward to the summer of 2023. At the same time, the Water Economy Forum has called for the application of "urgent and exceptional" measures to deal with the drought, such as establishing restrictions on the supply of water in some regions and using alternative sources, fundamentally through the reduction, reuse of water and desalination, as well as increasing investments in optimization of the supply network.

Water in boats or tank trucks, hourly cuts in the domestic supply, closure of showers and public fountains... Water restrictions are spreading in Spain as the summer progresses and the reservoirs empty.

The apparently most exotic cases occur in the Basque Country, which has almost full the swamps of the internal basins, but it will have to take drinking water by boat from the Santurce estuary so that the residents of Bermeo, Mundaka, Sukarrieta can drink and Busturia;

and that of Ribadavia (Ourense), where there is distribution of water in jugs.

The restrictions affect at least 350,000 inhabitants of Galicia and some 450,000 of Catalonia, where 150 municipalities already have water rationed: an average of 134 liters per person per day.

At the moment, no large city has suffered appreciable supply cuts, although in Catalonia they are already preparing to face that possibility.

Madrid, on the other hand, is experiencing a normal situation, since only one of the 13 reservoirs dependent on the Canal de Isabel II (El Vado) is below 40% of its capacity.

Seville, for its part, has agreed to buy water in case it soon finds that it cannot maintain the city's supply.

The stamp of queues to await the arrival of the tanker truck is already being seen in some towns, such as the Catalan one of Solsona, which has been using this system for several weeks, as well as in points in Tarragona or in Perladeda de San Román.

Far from there, in Huelva, 11 towns in the Sierra de Aracena and Picos de Aroche region, a traditionally humid area, are experiencing limitations of between seven and 13 hours a day.

The town of Cumbres Mayores, with 2,000 residents, is going to celebrate its Day of the Jars party on Saturday "in a symbolic way" by the courts.

In Baena (Córdoba) supply closures are being imposed at night, while in several coastal towns in Malaga the water for showers and footbaths on the beaches has been cut off,

Navarra, also unaccustomed to the lack of water, is suffering from the depletion of springs or river headwaters from which many municipalities are supplied, such as those in the Erro valley, where night restrictions have been imposed.

The problem will worsen if the Yesa reservoir is not filled, in a state of emergency.

And the rains that could remedy it are going to come torrentially: the Pyrenees, Gúdar, Maestrazgo, Bajo Aragón and the Ebro Valley are on yellow alert for storms. 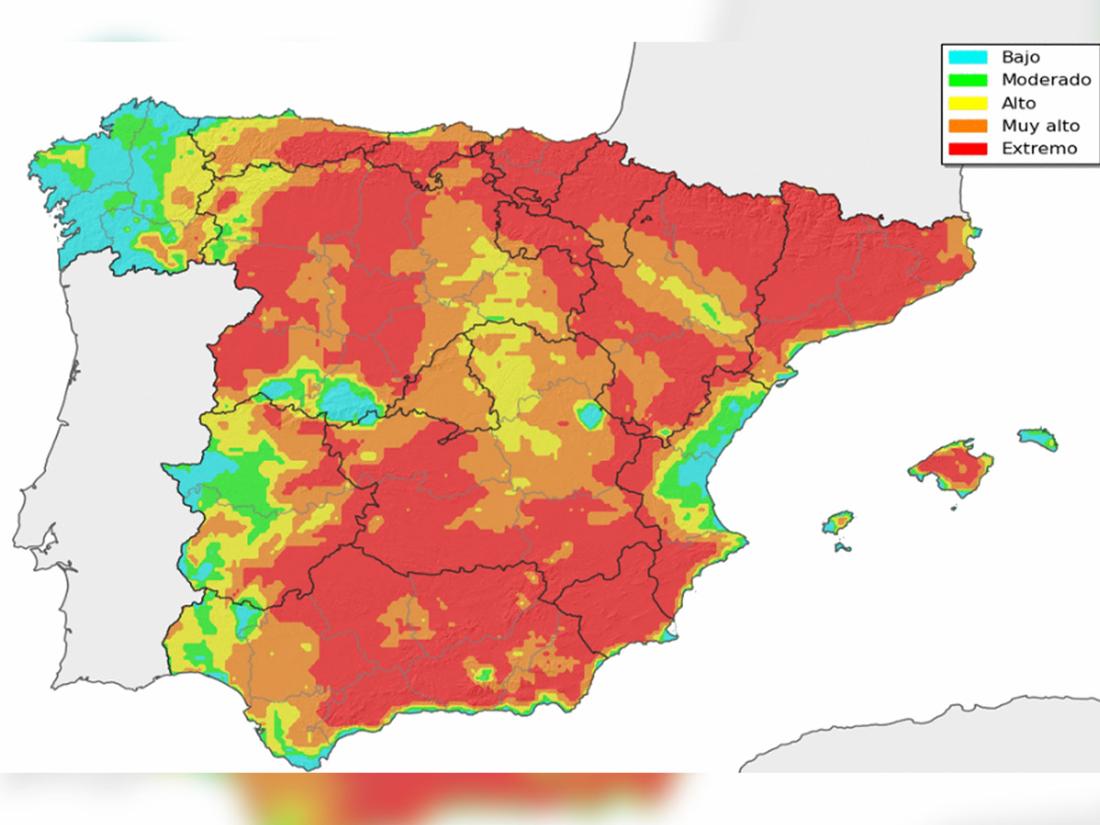 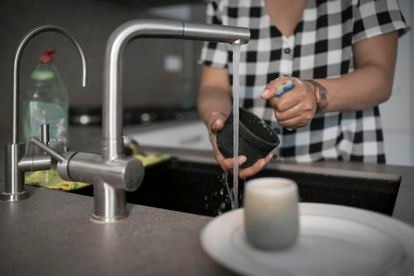 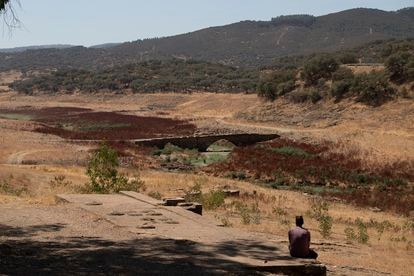 "Southern Europe is being cooked": Heat wave is rolling towards Spain - sometimes 45 degrees 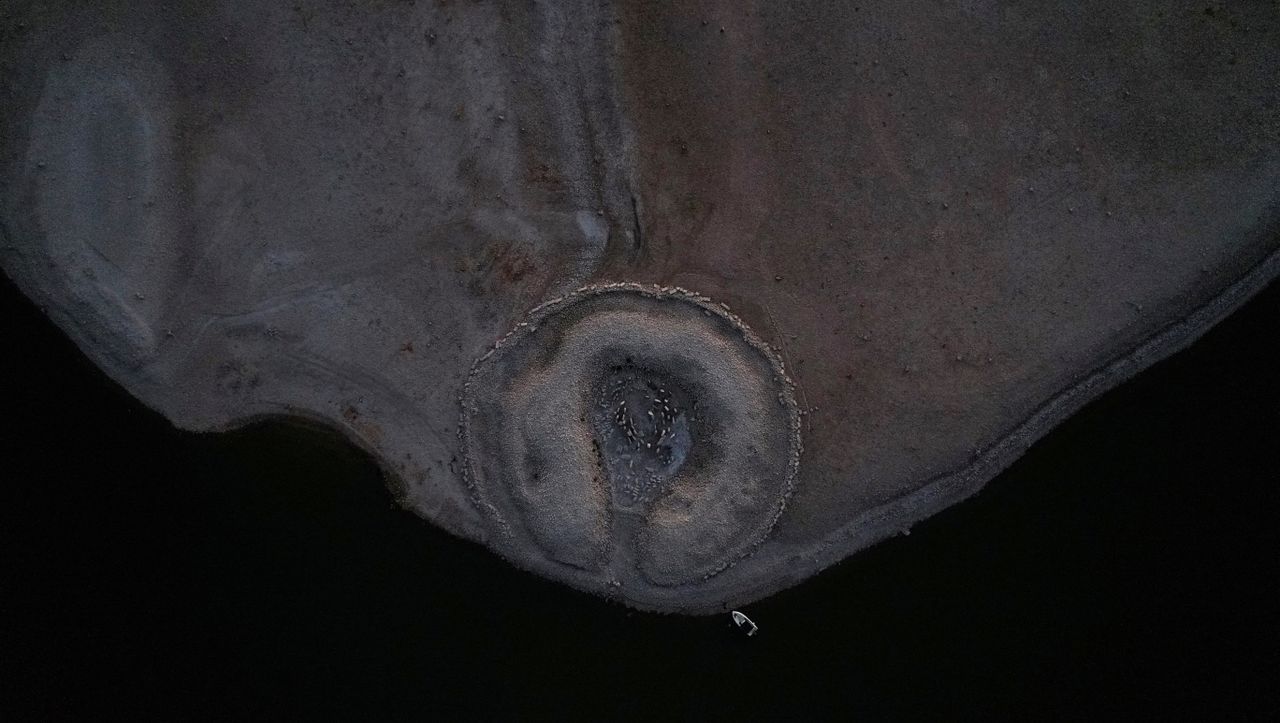 Drought Uncovers Ancient Place of Worship: The Return of the Dolmen 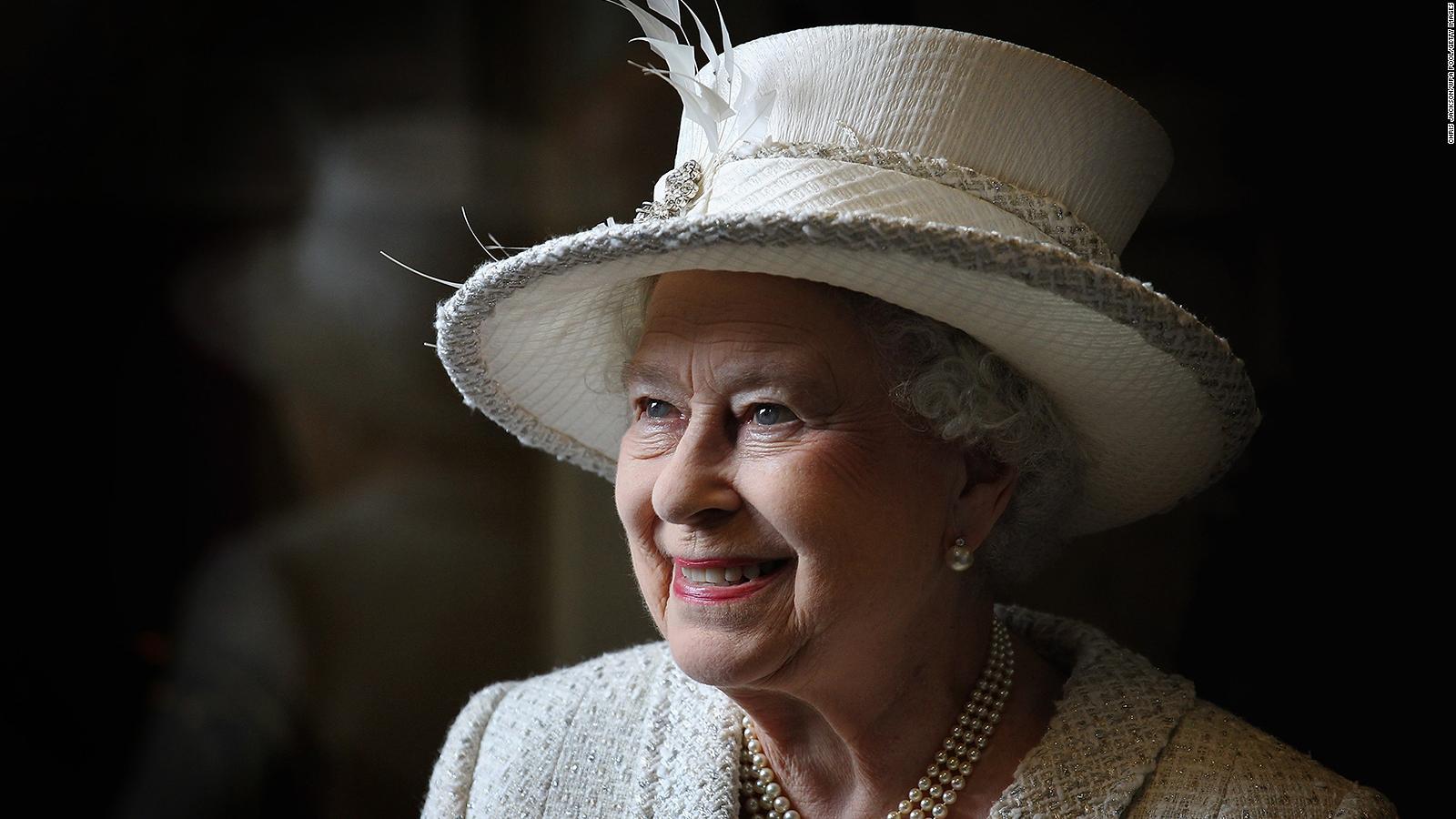 What does it mean that Queen Elizabeth II is under medical supervision? Dr. Huerta explains 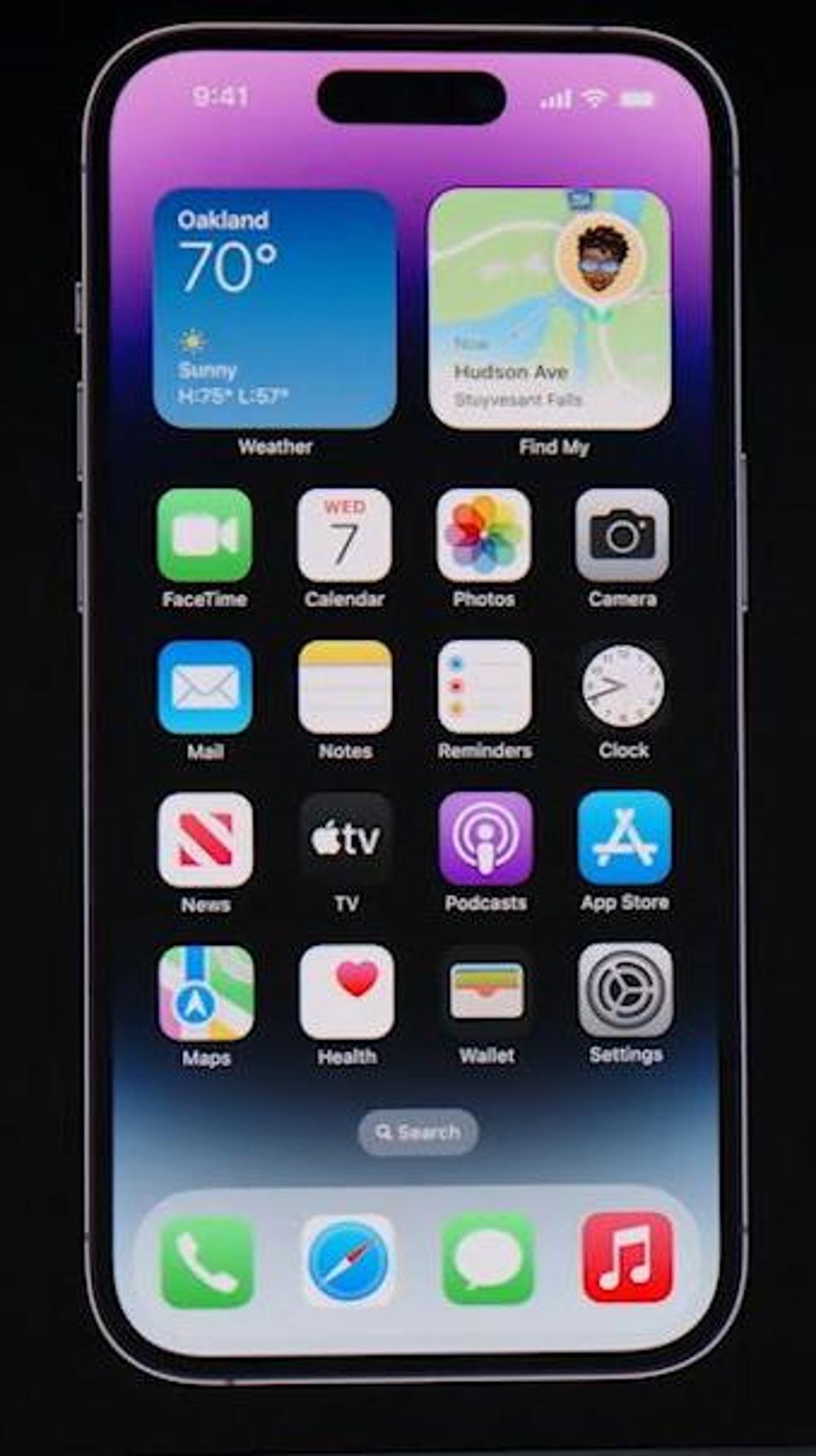 Apple Keynote: First pictures - This is what the new iPhone 14 looks like 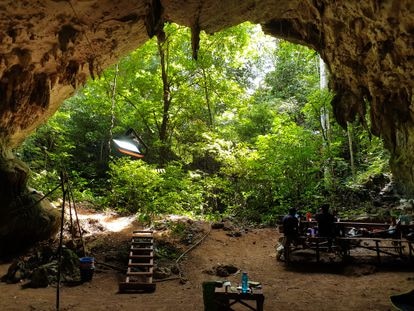 The remains of a child whose foot was amputated 31,000 years ago illuminate the origin of the surgery 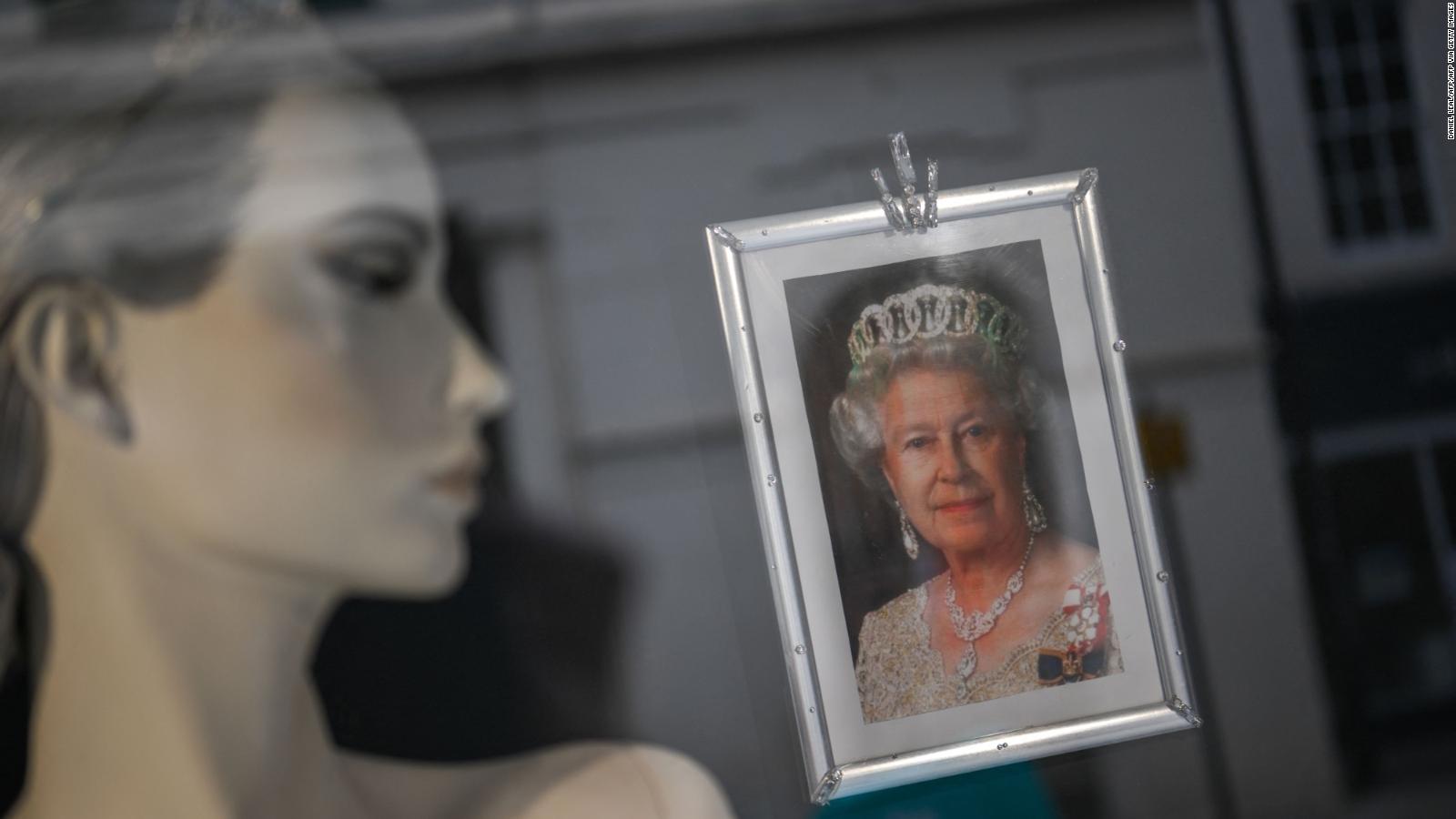 How does the "London Bridge" operation work, the protocol of the Royal House in the event that Queen Elizabeth II dies? Russian Defense: Destruction of the headquarters and arms depots of the Ukrainian forces and the elimination of dozens of Ukrainian soldiers
2022-09-08T14:42:40.342Z

The Prisoner’s Club warns of the deterioration of the health condition of the prisoner Nasser Abu Hamid in the occupation prisons
2022-09-08T14:31:59.167Z

Minister Salem: Working on a significant decrease in the prices of basic materials, with their availability in abundance in the markets
2022-09-08T14:30:59.653Z