News about the Russia-Ukraine war: This happened on Thursday night (August 11)

According to new footage, at least seven Russian warplanes were destroyed in the explosions in Crimea. A brewery fire is causing concern in Donetsk. And: Selenskyj announces revenge. The overview. 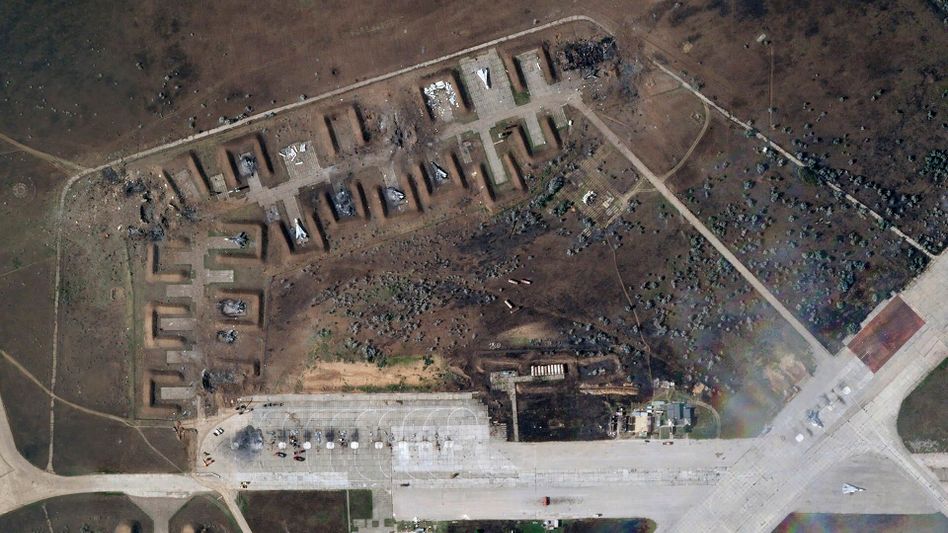 The Russian base at Saki in Crimea: The Planet Labs PBC image was taken after the explosions and is said to show at least seven destroyed fighter jets

It is still unclear what exactly led to the violent

explosions at a Russian military base on the Crimean peninsula

, the information is sometimes contradictory.

In the meantime, however, there are increasing reports of the damage that has been caused.

According to Ukrainian President Volodymyr Zelenskyy, nine Russian warplanes were destroyed in one fell swoop at the Russian air base in Saki.

Russia, on the other hand, claims that no aircraft were damaged.

are said to show that at least seven fighter jets were completely destroyed and others damaged.

The images were taken after the explosions on Saki.

Several intact aircraft can still be seen in photos of the same base that were taken before the detonations.

The US broadcaster CNN also reports on the new footage: Measured by the number of aircraft destroyed, it could be one of the most destructive days for aircraft in the Russian Air Force since World War II, the report says.

In the meantime, according to local authorities,

in the eastern Ukrainian separatist stronghold of

The fire in a brewery was caused by Ukrainian artillery fire, the Donetsk Territorial Defense announced on Wednesday.

The gas is distributed within a radius of two kilometers.

The population was asked to stay indoors and keep windows closed.

Ammonia - known for its pungent odor - is used as a coolant in beer brewing.

Since 2014, the front between Ukrainian troops and Moscow-controlled separatist units has been running just a few kilometers northeast of the largest city in Donbass.

There is heavy fighting there these days.

Russian troops try to break through the well-fortified Ukrainian lines.

The reports are usually not independently verifiable.

called on the residents of the Russian-occupied territories to resist.

They should send information about the enemy or collaborators to the Ukrainian armed forces through secure channels, he said in his nightly video address.

Zelenskyj also expressed the expectation that the Russian occupiers would soon flee.

“You already feel that the time has come to flee from Kherson, and in general from the south of our country.

There will come a time when they will flee Kharkiv region, Donbass and Crimea.”

In addition, the President announced retaliation for Russian air strikes on the Dnipropetrovsk region.

13 civilians were killed during the night on Wednesday.

How long the war will last depends on Russian losses, Zelensky said.

"The higher the occupiers' losses, the faster we can liberate our country." This in turn depends on foreign military aid to Ukraine.

The more decisive it is, the sooner Ukraine and Europe can live in peace again.

The government in Kyiv announced on Wednesday that it would like Switzerland to represent its diplomatic interests in Russia in the future.

According to Ukrainian media, the Swiss Foreign Ministry confirmed the agreement.

However, Moscow rejects this solution.

The Russian Foreign Ministry referred to statements by Minister Sergei Lavrov that mediation from a country that has joined sanctions will not be accepted.

According to a statement quoted by the newspaper Kommersant, Switzerland's neutrality has been devalued by its acceptance of EU sanctions.

At this point, the transitional period for the coal embargo against Russia, which the EU states had decided in April as part of the fifth sanctions package, ended.

At the time, the countries had agreed on a transitional period of 120 days so that the industry could adapt to the import ban.

The aim of the import ban is to further weaken the Russian economy against the background of the war in Ukraine.

According to the EU Commission in April, the coal embargo could mean a minus of around eight billion euros per year for Russia.

"I can already tell you that we are unable to pay," Moldovagaz chairman Ion Ceban told Moldovan news site Newsmaker.

“We will cover July but we cannot make the advance payment for August.

The ex-Soviet republic is hoping for a postponement and a new, cheaper contract with Gazprom in the fourth quarter.

The south-eastern European country, which has just been granted EU candidate status, is struggling with inflation at 29 percent and has repeatedly struggled to pay its gas bills over the past year.

At the time, Gazprom repeatedly warned Moldovagaz that it could stop deliveries.

what is happening today