600 liters of heating oil flow from the Trimini into the Kochelsee: the authority gives an assessment of environmental damage Created: 09/27/2022, 15:26 By: Veronika Ahn-Tauchnitz An attempt is being made to narrow down more precisely where the oil is running into the lake. © Fire Department Kochel An oil film spread on the Kochelsee on Saturday. About 600 liters of heating oil from the "Trimi 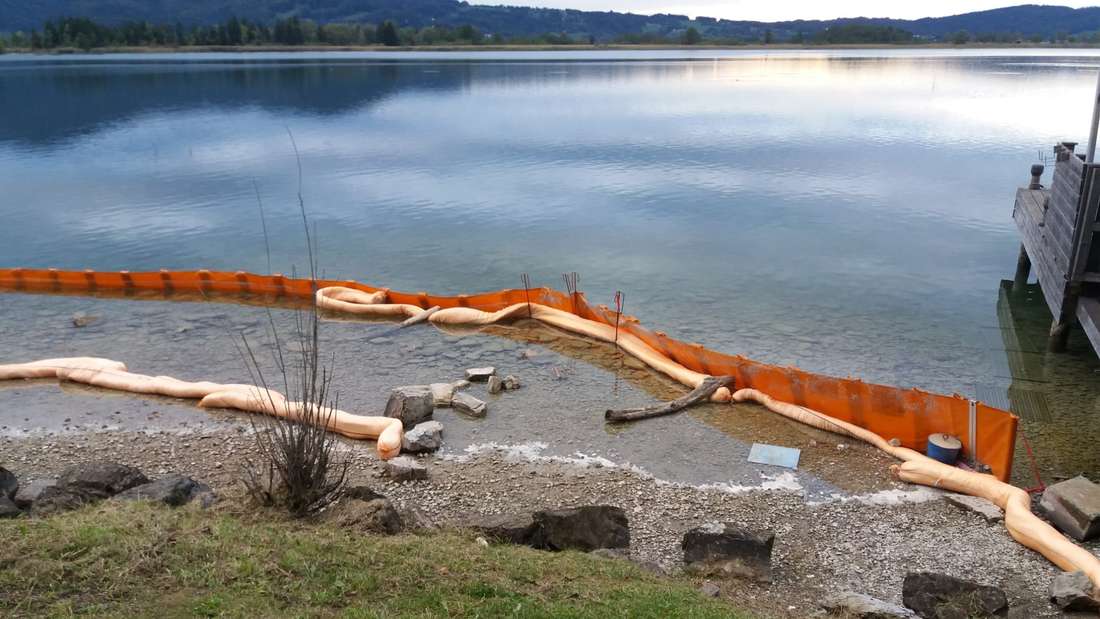 An attempt is being made to narrow down more precisely where the oil is running into the lake.

An oil film spread on the Kochelsee on Saturday.

About 600 liters of heating oil from the "Trimini" seeped into the ground and further into the lake.

– Good news from Lake Kochel: According to current assessments, “no damage can be observed in zoology,” says Katrin Knief, Head of Technical Water Supervision at the Weilheim Water Management Office.

Damage cases like the one at Kochelsee fall under their responsibility.

There, as reported, heating oil from the Trimini had seeped into the ground and from there also got into the water.

However, it is not a thick layer that can be dangerous to animals, but primarily streaks that have been driven on by wind and waves, says Knief.

The greater damage is probably in the ground.

"Of course we're not happy," says the water management office

The easily accessible bathing area in front of the Trimini is also primarily affected, not the much less accessible reed belt.

"Of course we're still not happy," says Knief when asked.

Now, with the help of the Kochel fire brigade and their oil barriers, attempts are being made to pinpoint exactly where the oil got into the water.

It's also about getting the tailings out of the lake.

There are different possibilities for this.

One of them is oil cloths that float on the water surface, absorb the pollutant and then collect it, as the department head explains.

A skimmer could also be brought in, which sucks in the water and filters out the oil.

How big is the damage caused by the heating oil that seeped from the Trimini into the ground and into Lake Kochel?

On Monday, representatives of the district office, water management office, municipality and also the fire brigade got an idea on site.

"At the moment, it is assumed that 600 liters of heating oil got into the ground," says Marlis Peischer, spokeswoman for the district office, on request.

How much of it went further into the lake is currently unclear.

According to Peischer, a shimmering film has formed on about 1000 square meters of lake surface.

Operation at the Kochelsee: fire brigade tries to bind oil in the lake

The Kochel volunteer fire brigade has been taking care of containing the oil since Saturday.

The sea area, separated by a floating oil barrier, has now been "divided into two chambers", says Commander Hubert Resenberger.

By increasing the limitation, they want to find out exactly where the oil seeps into the lake.

"We also bring in various materials to bind the oil," says Resenberger.

"Some of the Italians are very desperate": Opinions from the Tölz region on Meloni's election victory

Pest kills the box tree - "I'd rather fight before I surrender"

In the coming days, experts will have to clarify to what extent and how specifically the damage must be repaired.

The Kochelsee is not closed to water sports enthusiasts.

However, according to Peischer, all users are asked to keep a certain distance from the fire brigade's oil boom in the Trimini area.

The Kochel fire brigade laid oil barriers on the lake and tried to bind part of the oil.

The original report from September 25th: Kochel am See

– It cannot be overlooked in the pictures taken by the Kochel fire brigade: A dazzling film is floating on the water surface of Lake Kochel.

"You saw the streaks and smelled the oil," says Mayor Thomas Holz, who was at the site on Saturday.

At 11:10 a.m., the volunteer fire department was alerted.

According to Commander Hubert Resenberger, around 20 volunteers deployed to lay a floating oil barrier around 250 meters long on the lake.

Because the Kochlers did not have enough material, the Tegernsee fire brigade provided support.

In addition, attempts were made to bind the oil on the water.

The fire brigade checked the barriers all weekend to keep them in the right place despite the wind and current.

A dazzling film of oil could be seen on the Kochelsee on Saturday.

According to the Oberbayern Süd police headquarters, the damage occurred sometime between Thursday and Saturday.

In any case, on September 22nd there was a delivery of heating oil for the Kristall-Therme Trimini.

Heating oil had run into a shaft.

The swimming pool called in an expert who assessed the situation.

"But it was not assumed that the oil could seep outside the shaft," says Sunday.

By the way: Everything from the region is also available in our regular Bad Tölz newsletter.

Operation at the Kochelsee: Heating oil from the Kristall-Therme Trimini seeps into the ground

But that's obviously what happened.

The oil seeped into the ground and eventually ended up in the lake.

In fact, it was important to "react quickly" because there are many sensitive areas on Lake Kochel, says Holz.

There breed, rest and overwinter numerous rare and protected European bird species such as the great crested grebe, the great egret or the gadwall.

Oil film on Kochelsee: Specialist authorities must now say how to proceed

Representatives of the district office also got an idea of ​​the situation on site at the weekend.

It is currently unclear how much oil has seeped into the lake and how extensive the clean-up work will be.

All of this and the other measures would be examined and determined by the specialist authorities from this Monday, says Holz.

Only then can the amount of property damage also be quantified, adds police spokesman Sunday.

The Kochel am See police have definitely started investigating the water pollution.

You can find even more current news from the region around at Merkur.de/Bad Tölz. 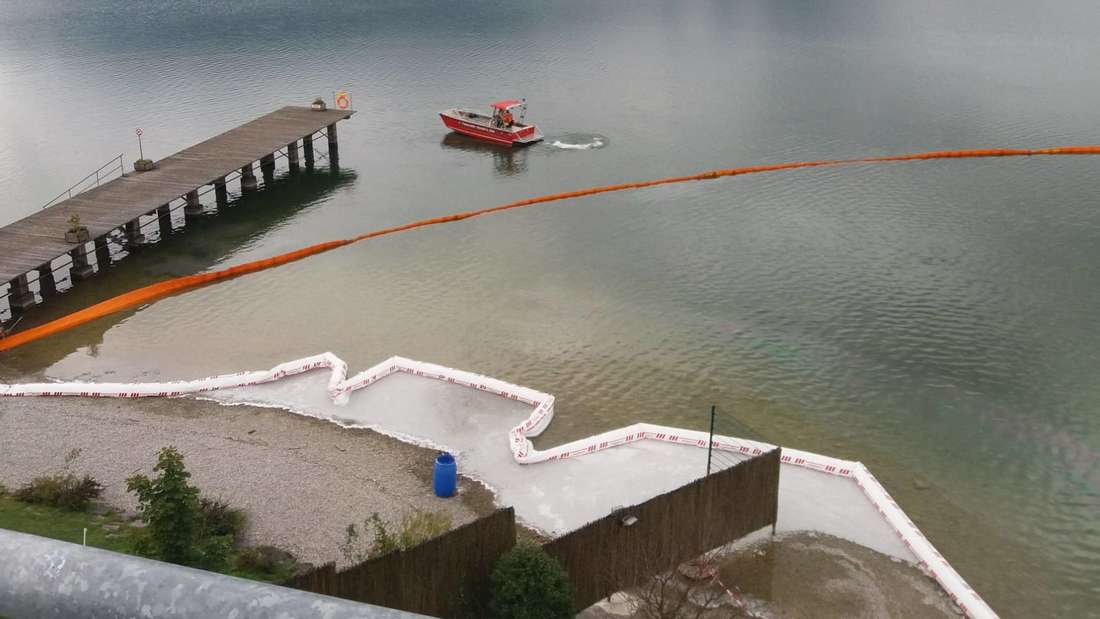 Heating oil runs out: 600 liters seep into the ground and Kochelsee 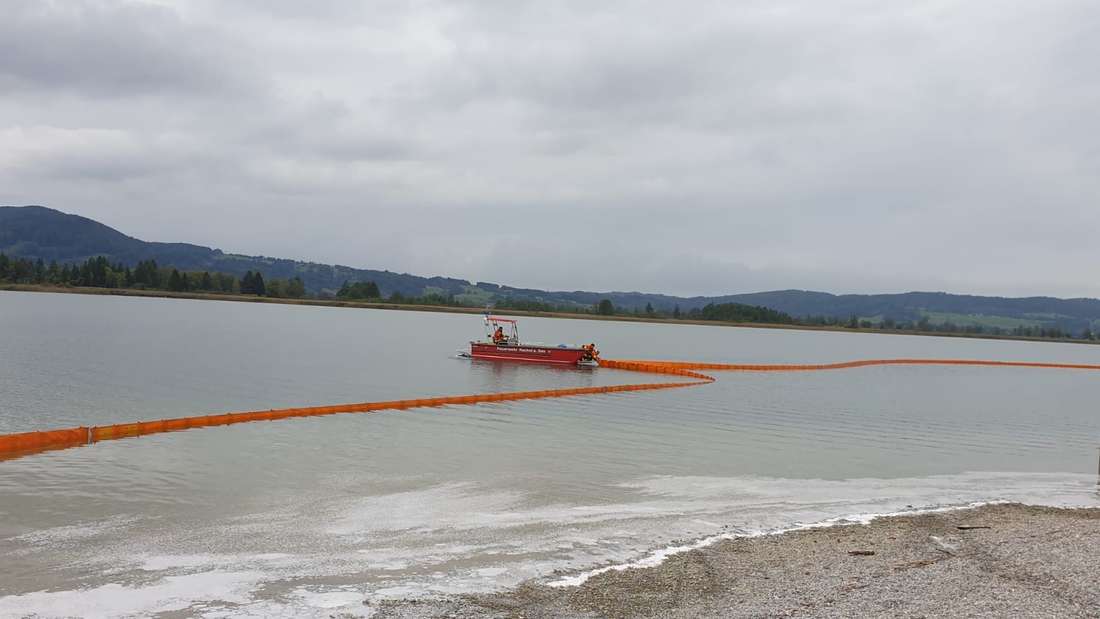 Heating oil in the Kochelsee: Three contaminated spots found in the ground 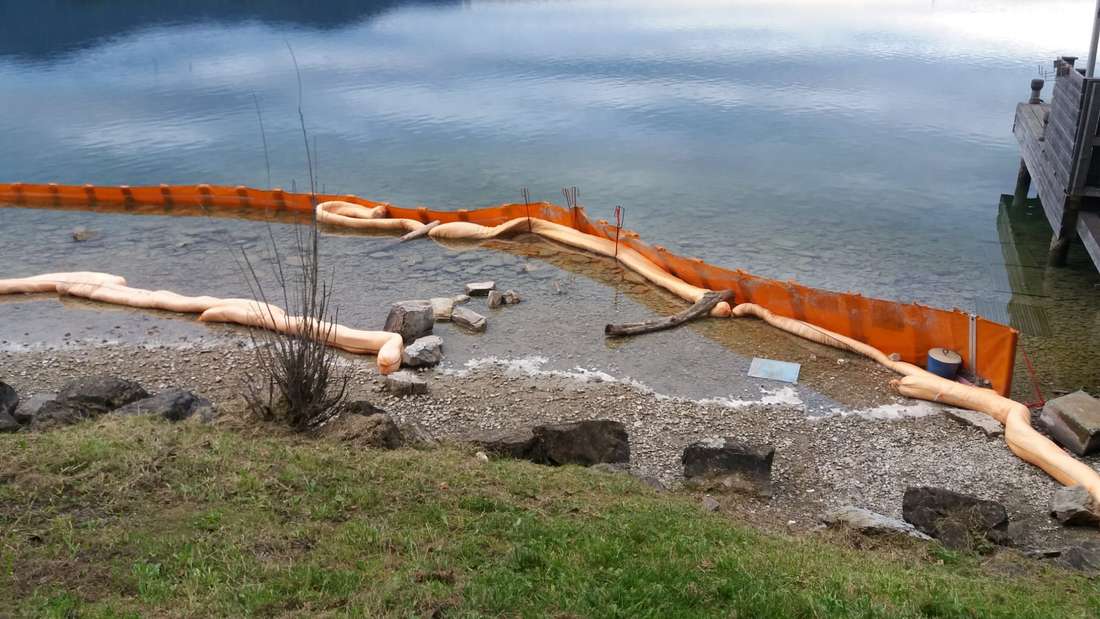 Kochelsee: oil film is declining - no sick animals found yet

Heating oil runs out: fire brigade has to set up oil barriers on the Kochelsee Lenggries relies on solar roofs instead of bricks