More travel towards Cecina again Created: 09/27/2022, 16:45 By: Stefan Reich In the streets of Cecina, Alessandro Regoli (President of the Targa Association, 2nd from left), Gilching's Mayor Manfred Walter (3rd from left) and Jakob Promoli (Chairman of the Cecina Association of Gilching, right) met local politicians from Cecina as part of the Targa parade, in which the "Guichinger customs" also 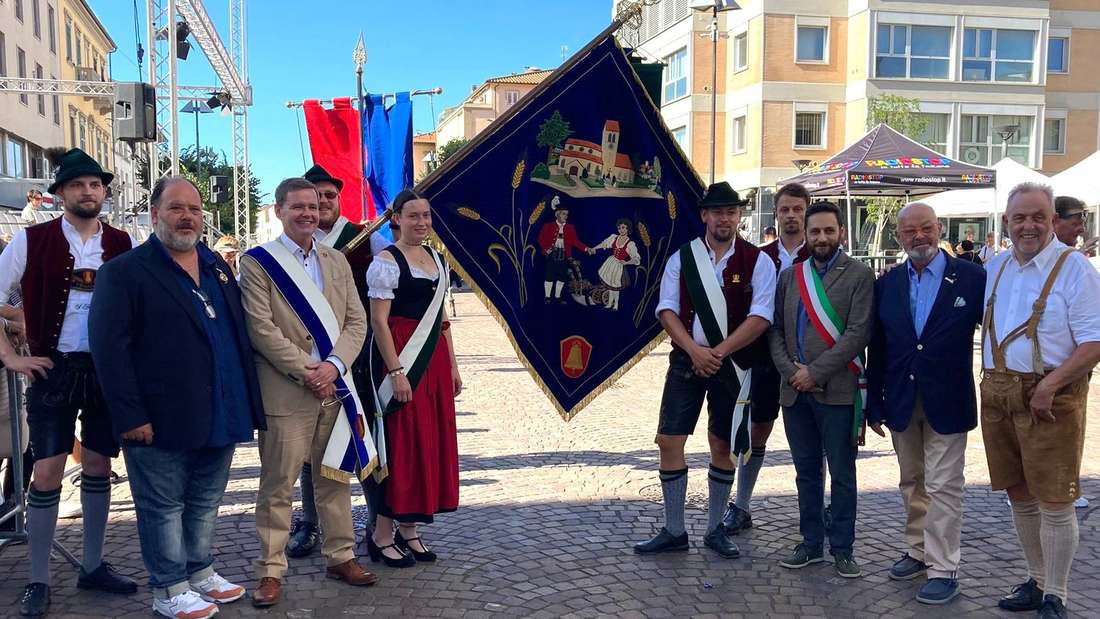 In the streets of Cecina, Alessandro Regoli (President of the Targa Association, 2nd from left), Gilching's Mayor Manfred Walter (3rd from left) and Jakob Promoli (Chairman of the Cecina Association of Gilching, right) met local politicians from Cecina as part of the Targa parade, in which the "Guichinger customs" also took part.

The pandemic has not allowed the partnership between the municipality of Gilching and Italian Cecina to cool down, despite reduced face-to-face meetings.

Now they visit each other again and make new connections.

– After two years with reduced travel to Tuscany due to the pandemic, a larger delegation from Gilching made its way to the Italian partner municipality of Cecina again this year.

The "Association for the Promotion of the Cecina-Gilching Partnership" was there, as was the "Guichinger Customs" and a delegation from the community with Mayor Manfred Walter and partnership officer Karin Keil.

Gifts were exchanged, as was Oktoberfest beer, appropriate to the season.

And many a conversation was held about projects that should deepen the partnership and allow new connections to grow.

The highlight, however, was once again the participation in the Targa Cecina, a city festival that is almost a hundred years old in its origins and includes a large procession in which groups from the districts of Cecina compete, among other things, to see who can design the most beautiful float.

Now the members of Guiching's customs with flags and costumes and the mayor with a blue and white sash again marched through the coastal town in Tuscany, together with delegations from Cecina's Spanish and French twin towns.

During the visit, Manfred Walter also met with the mayors of Cecina, Sagunto in Spain and Sin-le-Noble in France to discuss cooperation within the framework of an Erasmus project.

Teachers from Cecina were also there.

The EU's Erasmus program is used for educational exchange.

"The idea is that students from Gilching, Cecina, Sagunto and Sin-le-Noble deal with topics together and also visit each other," reported Walter after returning.

"What that can look like exactly should now be discussed at the schools in the four locations."

At the meeting, Walter received the sheet music of his composition “Warm greetings from Cecina to Gilching” from Massimo Ferrini, musician and composer from Cecina, the response to a hymn written two years ago by a Gilchinger to the friendship between the two communities.

"I haven't heard the piece yet," said Walter.

"I will now play the melody myself on the guitar and then hand over the sheet music to our music school."

For Thomas Haidt, who represented the Guichinger customs, the exchange with the Targa Association was also on the agenda.

He is dedicated to local customs and organizes the annual Targa parade.

The association had invited the people from Guiching after representatives had visited Gilching on May 1st this year.

Jakob Promoli, chairman of the Gilchinger partnership association, had encouraged the exchange between the traditional associations, originally as a project to apply for public funding.

Now, even without them, it looks as if the connection to Tuscany, which has existed for more than 30 years, will be further deepened with the exchange.