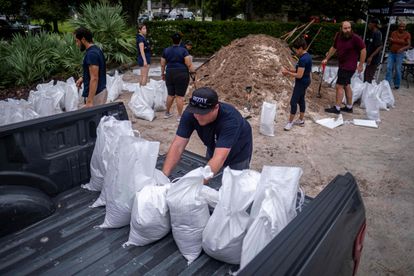 Volunteers fill sandbags in Tampa, Florida, on Tuesday to prepare for the arrival of Hurricane Ian. RICARDO ARDUENGO (AFP)

Stores have run out of bottled water, some basic foods and items related to hurricanes such as propane gas, planks, batteries and everything that is used to face a storm.

Fuel is scarce at some service stations.

For hours there have been queues of cars to move from the most threatened sites.

Florida is preparing for Hurricane Ian, which is expected to hit the western coast of the state this Wednesday with torrential rains and strong winds.

In fact, after the hurricane passed through Cuba, this Tuesday the rains have already hit part of Florida.

The Tampa airport, near the bay, has announced the cessation of its operations from Tuesday afternoon indefinitely due to the risk of winds and floods.

It will reopen when it can operate safely.

Other smaller airports in the state have also announced the closure, but the one in Miami remains operational for now.

The National Hurricane Center (NHC, for its acronym in English) has declared a hurricane alert for most of the western coast of the peninsula, including Tampa Bay, where the third largest city in the State, Tampa, is located, with about 335,000 inhabitants, only behind Jacksonville and Miami.

The NHC forecasts that the eye of the hurricane will reach the coast this Wednesday around 2:00 p.m. (8:00 p.m., Spanish peninsular time) and cross Florida diagonally to the northeast.

Forecasts suggest that it could become a category 4 hurricane on the Saffir-Simpson scale before making landfall, that is, with sustained winds of 131 to 155 miles per hour (210 to 250 kilometers per hour).

Others have also made non-binding recommendations in this regard.

A hundred shelters have been set up and hospitals and health centers have also been evacuated.

The president of the United States, Joe Biden, has indicated this Tuesday in an act in the White House: “Citizens of the potentially affected area must obey the instructions of local authorities: evacuate when ordered and be prepared for the winds of the storm when it comes.

Biden issued an emergency declaration this Saturday that affects numerous counties in Florida.

With it, he authorizes the Department of Homeland Security and the Federal Emergency Management Agency (FEMA) to coordinate all disaster relief efforts and provide appropriate assistance.

"The forecasts may change, but for now the experts say that it could be a very severe hurricane, with danger of death and with a devastating impact," the president said on Tuesday.

Biden has called several Florida mayors from the areas potentially affected by the hurricane this Tuesday, as reported by the White House.

Instead, she has not spoken with DeSantis, with whom the relationship is especially tense since he chartered planes with immigrants to Martha's Vineyard (Massachusetts).

The Florida governor is considered a potential candidate for the 2024 presidential election.

Queues at a gas station in Port Charlotte, Florida.

Most hurricanes usually reach Florida along the eastern coast, which is very used to meteorological attacks.

This, however, will mainly affect the western part of the State.

Those that have remained in the memory are those of 1848 and 1921, which had devastating effects and even redefined the geography of Tampa Bay.

The water level of the floods in 1921 exceeded three meters, affecting the center of the city and destroying a good part of the structures built on the coast.

There are signs in Tampa indicating the risk of catastrophic flooding like these.

in 2004, which hit Punta Gorda and Port Charlotte, just south of Tampa.

in 2018, it affected the northern part of the coast, the Cape San Blas area.

The hurricane season in the Atlantic started this year with some delay, but in September it has made up for lost time.

The first storm to reach the category of a hurricane was Danielle, at the beginning of this month, when it is normal for there to be a hurricane in August.

Earl (who affected the Caribbean islands), Fiona (who especially punished Puerto Rico) and now Ian have followed him.

In between, there have been other tropical storms that have received names, but have not reached hurricane status.