Does not incite with his voice, does not disturb the instigators: Netanyahu's activation version in the fifth election - voila! 2022 election

Netanyahu moderates the incitement in order to scrape 2 mandates. Like Trump, he does not support delusional theories, but neither does he oppose them. That's where it came to the Capitol attack. Here, for the time being, only protesters are being attacked

Not inciting with his voice, not disturbing the inciters: Netanyahu's operating version in the fifth elections

In order to scrape two more mandates, the Likud chairman gave his vulgar campaign of incitement, but the activists he nurtured are breaking records with the "left-wing Nazis" theory. Netanyahu, like Trump, does not support the delusional theories, but neither does he speak out against them. There it came to the attack on the Capitol. Here for now They "only" attack demonstrators

On video: Attack on protesters at Gesher Hamad (Walla system!)

His videos are smiling, have relatively positive messages while legitimately and measuredly attacking the opponents.

The prominent agents of incitement (Amsalem, Karai, Regev, Distel-Atbarian and Co.) are in a deep media freeze.

Those with keen eyes and ears will notice that the familiar media eunuchs have also turned down the volume.

This is no coincidence of course.

Netanyahu's vulgar campaign of incitement during four election cycles was very effective for the purpose of forming a loyal cross-party camp.

It is exactly this glass ceiling that Netanyahu is trying to break in the current campaign.

He is doing everything to scratch those two mandates that shy away from incitement and incitement against entire sectors of Israeli society - leftists, Arabs, etc. - and also against the law enforcement authorities.

There's just one problem with this plan: a poison you've been injecting for so many years doesn't go away just because you tone it down a bit.

The lies that have been spread for years by Netanyahu's people have not only not disappeared from the web, they are multiplying, developing, and gaining distorted mutations.

The cocoon created by Netanyahu and his emissaries stands up to its creators and has an independent life of its own.

Unlike the previous campaigns - positive messages in a smiling atmosphere.

Netanyahu, in the bus with the armored glass (photo: official website, no)

Take for example the holocaust materials, the morbid and creative use of which has been made on social networks has recently reached its peak.

The physical attack seems shocking to law enforcement officers, but to Ben Yehuda and his supporters it is probably natural.

After all, what is more natural than attacking Nazis who roam freely like this inside the State of Israel.

Well, it turns out that for a long period of time, in internal and public discussions on social media, Netanyahu's operatives have been engaged, what do you know, in locating Nazis.

It turns out that Ben Yehuda is the new Shimon Wiesenthal.

When Ben Yehuda got on the same bridge, among the many curses, he also shouted through the megaphone into the ears of the protester Rami Matan, the following text: "The aliens are from Germany, your mother was raided by the SS."

This text sounds closed and strange, but in a short time the mystery was solved.

The people of the "checkers" project on the Twitter network checked and found tweets and Spices conversations on Twitter that explain everything.

In another Spices conversation, one of the participants said: "These are tens of thousands who entered Israel and stole the identities of Jews who perished in the Holocaust."

Well, Chaim Moshe Shapira, who was the political leader of religious Zionism for many years, as part of his struggle in 1948 over the immigration policy in Israel, did raise a concern that Israel would welcome "foreign women", some of whom belonged to the Nazi party.

Ben Yehuda and his friends discovered that this is wonderful material to work with: from now on, all Ashkenazi leftists will be accused of being the son, or grandson, of a Nazi gentile (funny that Ben Yehuda makes sure to use the archaic term "gentile" that Shapira used).

If the Ashkenazi leftist also holds a sign against Netanyahu, the indictment will become a conviction.

A Likud activist attacked anti-Netanyahu demonstrators - and was suspended

The theory of the leftist Ashkenazi descendants of the Nazis

But it doesn't end there.

Ben Yehuda and his friends develop the idea in one of the Spices conversations: "Our problem is that Kastner's granddaughter controls us, her grandfather sold Jews to Eichmann, and she wants to sell us to the Islamic Jihad."

Israel Kastner was a political activist in the 1950s, and during the Holocaust he was a member of the rescue committee for the Jews of Budapest.

In a high-profile libel trial, it was determined that he "sold his soul to the devil" when he obtained the 600 certificates for "privileged" that were taken out of the ghetto on the "Kastner train".

After he was shot to death by assassins, the Supreme Court overturned the district court's decision.

Kastner's granddaughter is the Minister of Transportation, Merav Michaeli.

Another participant added his own insight: "Ganz is the son of a woman who was on the train (of Kastner, BK).

Lapid is the son of Tommy Lapid, who was Kastner's advisor." "A group of privileged Kastner survivors rule the country," concludes Ben Yehuda, adding that in order to save the "privileged", Kastner sold the religious in Budapest to the Nazis. The rest of the people of Israel sold to Eichmann." Ben Yehuda also added a personal note to all this. He said that his elementary school was run by a "damned Bolshevik", and in his high school "there were two teachers who were Holocaust survivors, cruel, cruel, they would come, beat, give the students baked goods".

So now everything works out;

The left-wing Ashkenazim are divided as follows: either they are descendants of Mihassi Kastner (probably two of whom beat Ben Yehuda as a child);

Or are they really descendants of Nazi alienation, including Rami Matan, one of the heroes of the Battle of the Chinese Farm from the Yom Kippur War.

"As a historical fact," writes a tweeter named Noam Golani, "all traitors to the State of Israel and all traitors to the Jews before the establishment of the State of Israel were left-wingers, a fact! The fact that some of you are indeed descendants of Nazis who infiltrated Israel in the first years of its establishment is also an absolute fact that was written even in the press of those days".

Tweeter Avital Director wanted to be practical: "It turns out that it's really true, that there were Nazis who stole the identities of Jews they murdered and immigrated to Israel with them... I would do a DNA test on the trash in the picture (the protester Amir Hashakal, BK), to locate the Aryan genetic family tree his and then pass his sentence accordingly." Avital thinks practically.

It turns out that he is the new Shimon Wiesenthal.

All these poisoning things grew in well-fertilized soil.

Even if in the last months Netanyahu ordered his emissaries to follow the laws of laying waste on this land - no fertilizer, no manure, etc. - then the land has reached the months of laying this land ready.

Take for example the opening day of Netanyahu's trial.

After inciting for many minutes against the law enforcement authorities, shamelessly, inside the Jerusalem District Court, he told about a meeting he had before they came to trial with Holocaust survivors: "They (the survivors) tell me... One woman tells me: 'We were in the woods , we pray for you,' another tells me: 'The wolves are coming to devour you, you are not alone.'"

At best, Netanyahu wanted to liken the police and the prosecutor's office to wolves.

Netanyahu Jr. was less implicit, he frequently used Nazi analogies, in part when he compared the Israeli police to the Gestapo.

He said of the Balfour protesters that they were like "the Nazis in the 1930s".

Of course, the verbal outcry also reached the other side.

Avigdor Lieberman called Netanyahu "Goebbels", and received too mild condemnations from the heads of the political parties, including from the Prime Minister.

The bed of blasphemies may freeze Amsalem and Krei in the freezer, but not Ben Yehuda and his friends at the intersections, whose poison has already become their fuel.

As usual, the distance between incitement and physical violence is short.

In the last three weeks, there have been five incidents of attacks on the bridges.

Three weeks ago, protesters were attacked at Gesher Rashonim in Israel with stones and sticks (with songs supporting Netanyahu playing in the background). The victims were injured, bled and needed treatment at the hospital. A week later in Hod Hasharon, a group of motorcycle and ATV riders arrived and stopped near the protesters. The riders beat one of the protesters with his helmet That Saturday, at the anchor interchange, one of the demonstrators burned the sign she was holding.

The poison became his fuel.

So on the one hand, in order to scratch the two lost mandates, Netanyahu avoided taking an active part in the incitement, as he did in the last four elections.

On the other hand, apparently he still wants to keep the hate agents active.

Otherwise, how can one explain his silence.

Not one word of condemnation, not even lip service, has come out of his mouth so far.

Not about the incidents of violence, nor about the Damascus plots and the Protocols of the Elders of Zion version 2022. Ben Yehuda was paid by the Likud party, even though in the past he was already involved in many violent incidents both verbal and physical.

He uses his mouth, threatens, incites rudely throughout the election campaigns, and now also beats.

Just give them a chance to photo op with him.

Now the Likud party has announced that it is suspending Rami Ben Yehuda until the circumstances of the case are clarified.

We will wait anxiously.

Netanyahu, like Trump, will not say anything thanks to the theory, but of course he will not worry about denial.

There, in the United States, it reached the Capitol attack.

In Israel, meanwhile, only protesters are attacked at intersections.

Netanyahu in closed talks: If Shaked passes - she will extort the prime ministership from me like Bennett - voila! 2022 election

Does not incite with his voice, does not disturb the instigators: Netanyahu's activation version in the fifth election - voila! 2022 election

Lapid in response to Netanyahu's words about the negotiations with Lebanon: "Harms Israeli interests" - Voila! Elections 2022

The so routine elections can end in a whirlwind roller coaster - voila! 2022 election 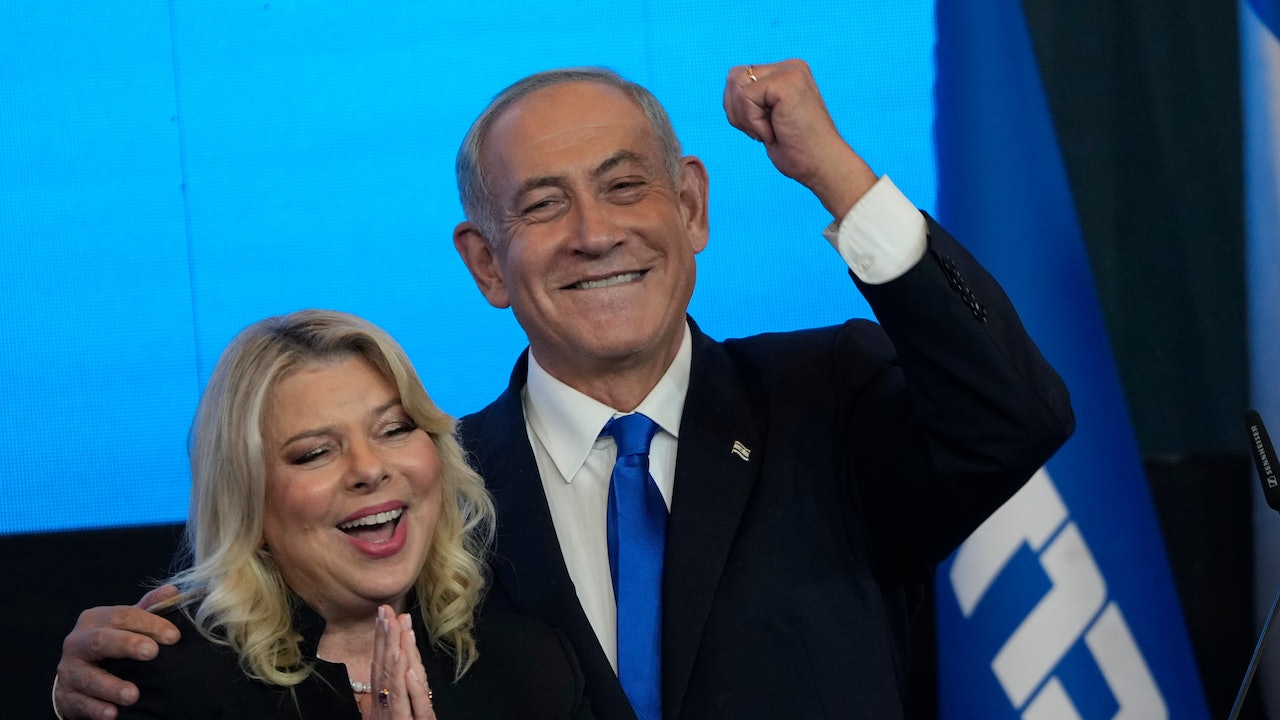 Ayelet Shaked: There will be a unity government, there is no such government without the Likud - voila! 2022 election