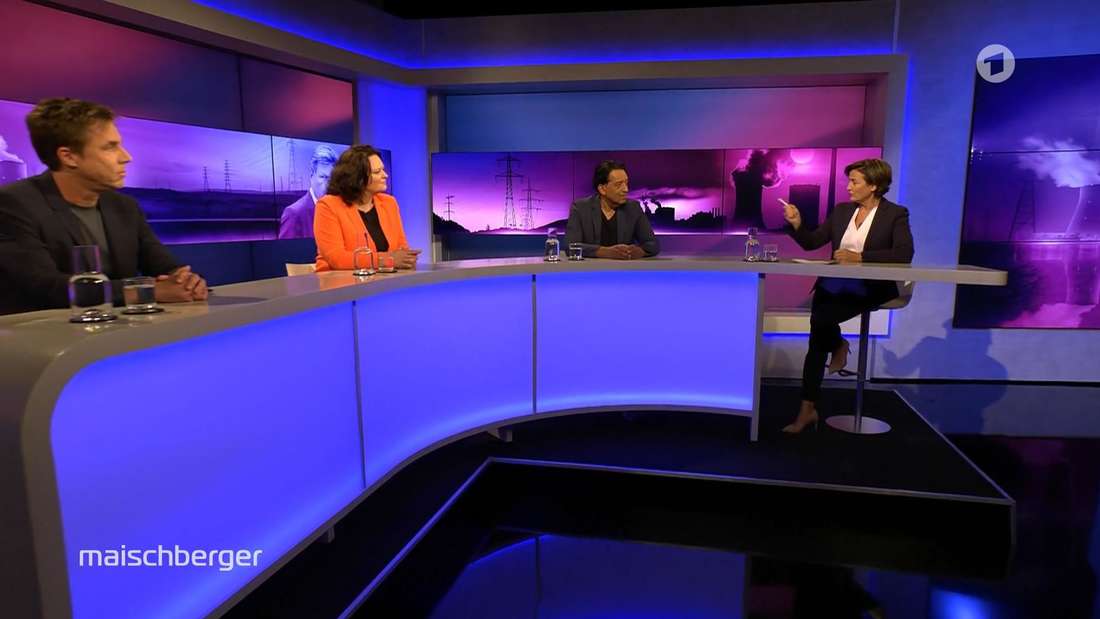 First tough energy price wrestling - then the atomic bomb: At "Maischberger" warnings and a cool thesis about "fear" can be heard on Wednesday.

"I was always opposed to nuclear power," says journalist Cherno Jobatey on Wednesday (September 28) with Sandra Maischberger in the first, but in this situation he can understand the decision.

"I also believe that you have no other choice," judges ARD correspondent Kristin Schwietzer.

author Markus Feldenkirchen emphasizes how much Robert Habeck forced himself to make this decision.

"The final storage issue has not been resolved to this day," he points out.

Nevertheless, the decision is correct.

In Feldenkirchen's view, it is understandable that Habeck no longer appears confident in his performances and is "part of the story".

You can see – and you should – that this decision was forced on him.

In the quote from the Economics Minister, the word "probably" is of great importance because it gives the impression that the continuation of nuclear power plant operations is under observation until Christmas.

But that's not true at all.

Maischberger" - these guests discussed with:

In view of the never-ending discussion about the gas levy, Feldenkirchen wonders: "Is it due to incompetence or ideological differences in financial policy that cannot be made appropriate?" It must be one of the two.

"The citizens are tired of receiving such suggestions," Klöckner replies to Maischberger's question as to whether she will not light her Christmas tree.

"We will not achieve an energy transition with this".

Katrin Göring-Eckardt believes "we will get by without Putin's gas".

Before the transition, other gas and fossil energy are needed, but in the long term this can also be done without.

To do this, she demands a “booster in renewable energies”.

Klöckner at Maischberger: Ampel should have gone "all in" long ago

Klöckner criticizes the government for the fact that the extension of the nuclear power plant running times comes too late, "and then only until April 23".

She calls for an extension until 2024, “also to send a clear signal to the market” – just as the CSU-led Bavaria demands.

One should have “long since gone all in to keep prices as low as possible”.

Maischberger reproaches Katrin Göring-Eckardt: “We have a federal government that was not represented in the prime ministers’ conference on Wednesday.

We have a gas levy that was supposed to come on Saturday, but actually doesn't come, which has made the price more expensive at first.

We are discussing a gas price brake, but nothing is happening.” Göring-Eckardt replies: “We will have a solution by the end of the week.” So far, the only question has been where the money will come from, and that is where the coalition partners disagree.

When Maischberger demands an example, Goering-Eckardt dismisses it - it only leads to more confusion.

Klöckner laughed and shook his head.

"I really have to go in now," Klöckner interrupts, "the federal government's subsidy programs are not getting where they should."

In the corresponding committee meeting in the Bundestag on Wednesday, the government was "not able to speak".

She calls for a base price for basic consumption, “because there must also be an incentive to save”.

For example, the average demand over the past three years can be used as the basis for basic consumption.

“These are all measures that are currently being discussed,” comments Göring-Eckardt.

Back to Ukraine: Ex-Chancellor Angela Merkel (CDU) recently warned not to dismiss Putin's words as a bluff, but to take them seriously.

"In doing so, she is alluding to the threat of the use of nuclear weapons," says Feldenkirchen - even in the federal government, nobody is assuming a bluff.

author believes that this is one of the reasons why Scholz is behaving cautiously.

Feldenkirchen believes it is possible that far more weapons would otherwise be delivered from Germany to Ukraine.

In this regard, it is a balancing act for the German government.

“There are many who claim they know exactly what is happening.

But the truth is, no one knows whether Putin isn't going crazy after all," says Feldenkirchen.

The military expert and political scientist Florence Gaub explains her view of Putin's strategy in a one-on-one interview.

She does not consider the flight of many Russians that followed the partial mobilization to be an unusual phenomenon.

"Nevertheless, it is a statement that one does not support this war." Gaub was amazed at the previous discussion.

After all, the entire western world takes Putin very seriously, because the strategy in Ukraine is designed to provoke the Russian president as little as possible.

Gaub assumes that no nuclear weapons will be used.

"Because the weapon isn't the bomb, it's the fear of the bomb." With the use of nuclear weapons, Putin loses leverage.

"Then he would be disenchanted," says Maischberger.

Nuclear weapons have only been used twice in history.

"In Japan, at a time when the enemy did not have nuclear weapons.

After that never again,” says Gaub.

Today the situation is completely different.

"The war wouldn't be over if you detonated a nuclear bomb in Ukraine," says the military expert.

For these reasons, the use of a nuclear weapon makes little sense.

Maischberger – Conclusion on the show

Even after this broadcast, no one knows whether and how the gas surcharge will actually come about.

Katrin Göring-Eckardt only announces a decision.

Julia Klöckner criticizes the length of this process.

Markus Feldenkirchen even goes so far as to suspect incompetence or an insurmountable ideological gap among the coalition partners.

At least Florence Gaub helps to calm things down by dissecting the horror of the atomic bomb. Maischberger round attacks CDU experts as "Haudrauf" - and Söder as empty "'Wladi, let's talk', or what?!" Strack-Zimmermann and Weidel bite hard at "Maischberger".

Expert Zoff around Putin at "Maischberger": EU as provocateur - or soon the only savior from the "genocide"?