Planned annexation: Putin recognizes independence of Zaporizhia and Kherson Created: 09/30/2022, 04:53 By: Moritz Serif, Stefan Krieger, Christian Stör The Ukrainian territories occupied by Russia are now being annexed after the sham referendums. Update from Friday, September 30, 4:45 a.m .: Vladimir Putin has recognized the independence of the Ukrainian regions of Zaporizhia and Kherson. Thi The Ukrainian territories occupied by Russia are now being annexed after the sham referendums.

Vladimir Putin has recognized the independence of the Ukrainian regions of Zaporizhia and Kherson.

This emerges from presidential decrees published in Moscow on Thursday evening, in which Putin orders that “the state sovereignty and independence” of the two regions in southern Ukraine be recognized.

A ceremony is scheduled for Friday (September 30) in Moscow, at which these two regions, as well as Luhansk and Donetsk, will be annexed.

Moscow had already recognized the independence of the self-declared People's Republics of Luhansk and Donetsk a few days before the start of the military offensive on February 24.

Last Tuesday, multi-day "referendums" ended in the four areas that the Ukrainian government and Western states have rejected as illegal.

According to the pro-Russian authorities there, in these “referendums” a large majority of the population agreed to incorporation into Russian territory.

The annexation of Donetsk, Luhansk, Zaporizhia and Cherson is to be celebrated on Red Square in Moscow.

After the end of the Russian sham referendums in the occupied territories in Ukraine, numerous states and the UN denied the legitimacy of the votes.

"They cannot be called a genuine expression of the will of the people," said Rosemary DiCarlo, UN political affairs chief, Tuesday night.

The sham referendums are contrary to international law.

On the Russian side, former head of the Kremlin Dmitry Medvedev replied that these were victories: “The results are clear.

Officials in the Moscow-occupied regions of Zaporizhia, Cherson and Luhansk in Ukraine reported victories in the so-called referenda for annexation by Russia on Tuesday.

After counting all the votes, the electoral authorities in Zaporizhia in southern Ukraine declared that, according to the preliminary result, 93.11 percent voted for an annexation.

In the Cherson region, also in southern Ukraine, the occupation authorities reported approval of 87.05 percent.

The USA is preparing a UN resolution directed against the Russian sham referendums.

Ukraine's fight is also a fight for the values ​​of democracy, said US ambassador to the UN Linda Thomas-Greenfield on Tuesday at a meeting of the most powerful body of the United Nations in New York.

"Therefore, we will introduce a resolution condemning these sham referendums, urging member states not to recognize a changed status of Ukraine, and obliging Russia to withdraw its troops from Ukraine."

NATO warned Russia at the end of the so-called referenda before connecting four Ukrainian areas: “These areas belong to Ukraine,” Secretary General Jens Stoltenberg said on Tuesday after a phone call with Ukrainian President Volodymyr Zelenskyj on Twitter .

"The NATO allies support Ukraine's sovereignty and its right to self-defense without ifs and buts," emphasized Stoltenberg.

Russia again threatened to use nuclear weapons at the end of the sham referendum.

The Deputy Chairman of the Russian Security Council, ex-President Dmitry Medvedev, said that Moscow will defend the affected areas - "including with strategic nuclear weapons".

The Russian occupiers have declared the sham referendums in several Ukrainian areas over and presented the first results of the votes that violate international law.

After counting the first ballots in polling stations in Russia, more than 97 percent of voters from the regions of Luhansk, Donetsk, Kherson and Zaporizhia voted in favor of their home regions joining Russia, Russian agencies reported.

There was initially no information from polling stations in the occupied territories themselves.

Ukrainian refugees in Russia have also been called to vote since last Friday.

An unprecedented wave of annexations is therefore likely to begin this week.

According to the Kremlin, the sham referendums have “consequences” primarily for security in these areas.

"The legal situation will change radically from the point of view of international law, and that will also have consequences for security in these areas," Kremlin spokesman Dmitry Peskov told the press.

"Our justice system will consider all options, and of course our legislators, our law enforcement agencies and our jurists are ready," he added.

It provides for corresponding nuclear strikes in the event of a nuclear attack against Russia or an existential threat to the state.

"Russia has the right to use nuclear weapons, if necessary, in specified cases, in strict compliance with the principles of the government's nuclear deterrence policy," Medvedev said.

When asked about this, Peskov confirmed that Medvedev's statements reflected Russia's "military doctrine" and recommended that everyone be aware of the principles of this doctrine.

Results of the mock referendums expected on Tuesday

The sham referendums in the Russian-occupied areas of Ukraine are slowly coming to an end.

The people in the parts of the Luhansk, Donetsk, Cherson and Zaporizhia regions occupied by Russian troops have until 3:00 p.m. CEST (4:00 p.m. local time) to cast their votes on joining the Russian Federation.

The occupation authorities are expected to announce the outcome of the mock referendums on Tuesday evening.

Approval for joining the Russian Federation is expected to be between 80 and 90 percent.

After that, the separatist leadership wants to officially apply to Kremlin chief Vladimir Putin for admission to Russian territory.

The sham vote in the occupied territories is coming to an end.

But what happens after that?

If, according to the official result, the "yes" votes prevail, which there is no doubt about, the Russian parliament will vote on the treaty admitting the regions into Russian territory.

A corresponding draft law could be submitted to the Duma as early as Tuesday evening, the Russian news agencies TASS and RIA Novosti reported, citing parliamentary sources.

He could therefore be adopted in a special session on Wednesday.

The upper house of parliament, the Federation Council, must then give its approval.

A formality that could be completed on Wednesday or Thursday, according to Russian agencies.

After the conclusion of the parliamentary procedure, President Vladimir Putin could announce the annexation of the four Ukrainian regions in a speech as early as Friday - but an earlier appearance by the Russian President does not seem impossible.

The group of seven leading industrialized countries (G7) has already announced that it will “never” recognize the outcome of the so-called referendums.

The US announced a "rapid and serious" response in the form of further economic sanctions against Russia.

Even China called on the matter to respect “the territorial integrity of all countries”, but without condemning the “referendums”.

According to British secret services, the Russian leadership wants to justify the war of aggression in front of its own population with the expected annexation of Ukrainian areas.

Any announcement of annexation of the territories will serve to justify Russia's "special military operation" in Ukraine and aim to cement patriotic support for the conflict, a British Defense Ministry briefing said on Tuesday (27 September).

It is expected that Russian President Vladimir Putin will formally announce the annexation of the areas in eastern and southern Ukraine in a speech to the Russian parliament next Friday.

Kiev – In four Russian-controlled areas of Ukraine, the so-called referendums on annexation by Russia end on Tuesday (September 27).

On the last day of voting in the separatist areas of Donetsk and Luhansk in eastern Ukraine's Donbass and in the southern Ukrainian regions of Cherson and Zaporizhia, the polling stations are to be opened.

So far, pro-Russian officials have gone from door to door to collect votes.

After the end of the sham referendums in the occupied areas of Ukraine, a speedy union with Russia is expected.

According to the organizers, a minimum turnout of 50 percent was achieved in the occupied areas in eastern and southern Ukraine.

They are sham referendums because they are held without Ukraine's consent, under martial law and not according to democratic principles.

There have also been reports of people being forced to vote.

The voting, criticized by Kyiv and its western allies, began on Friday (September 23).

A possible annexation of the four Ukrainian regions to Russia as a result of the "referendums" is condemned by the West as illegal.

A further military escalation is also feared, because Ukrainian attacks on these regions could then be interpreted by Moscow as an attack on its national territory.

At the beginning of the sham referendum on Friday, the Kremlin had already assumed that Russia would join Russia.

Kremlin spokesman Dmitry Peskov said the process for including the regions could be quick.

The areas are expected to be annexed and possibly declared Russian territory by Vladimir Putin as early as Friday (September 30). 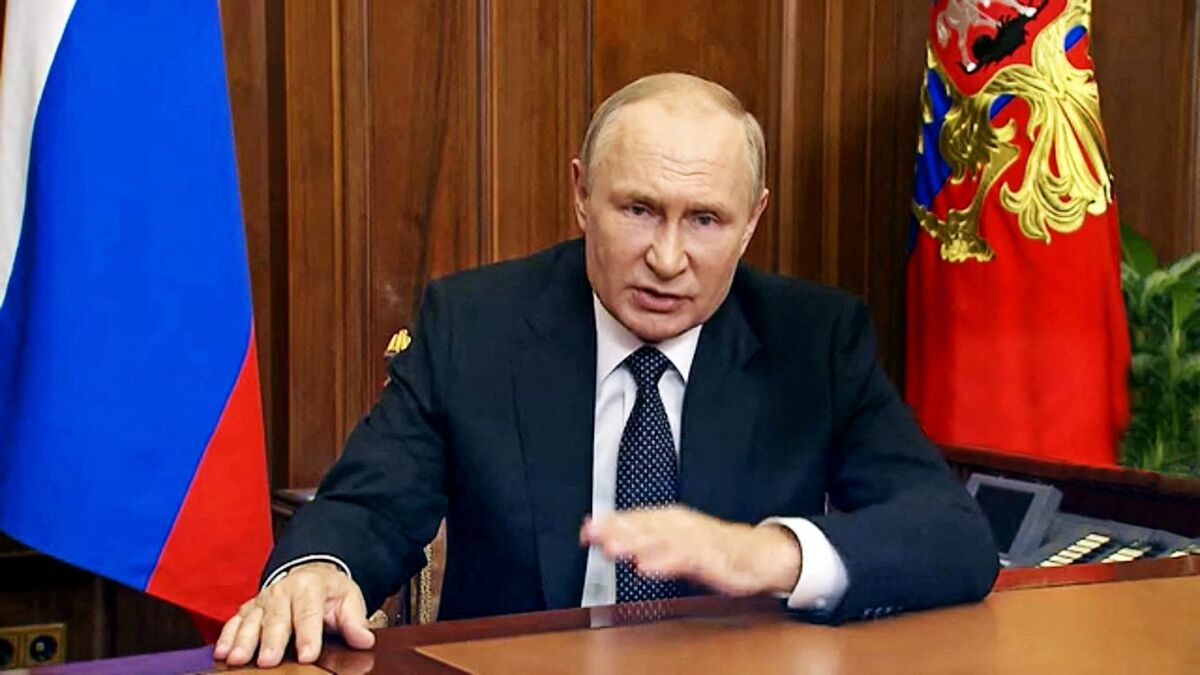 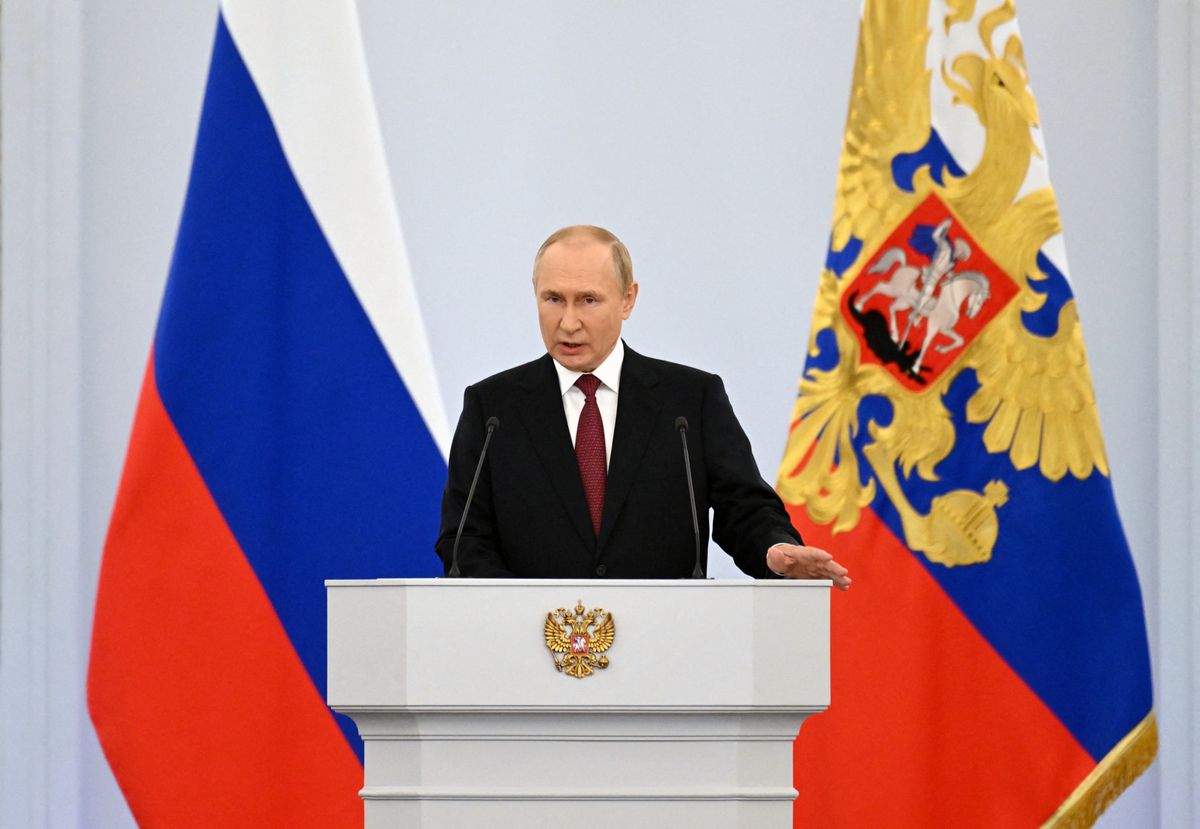 Putin proclaims the annexation of the four illegally occupied territories in Ukraine: "We will defend our land with all our might" 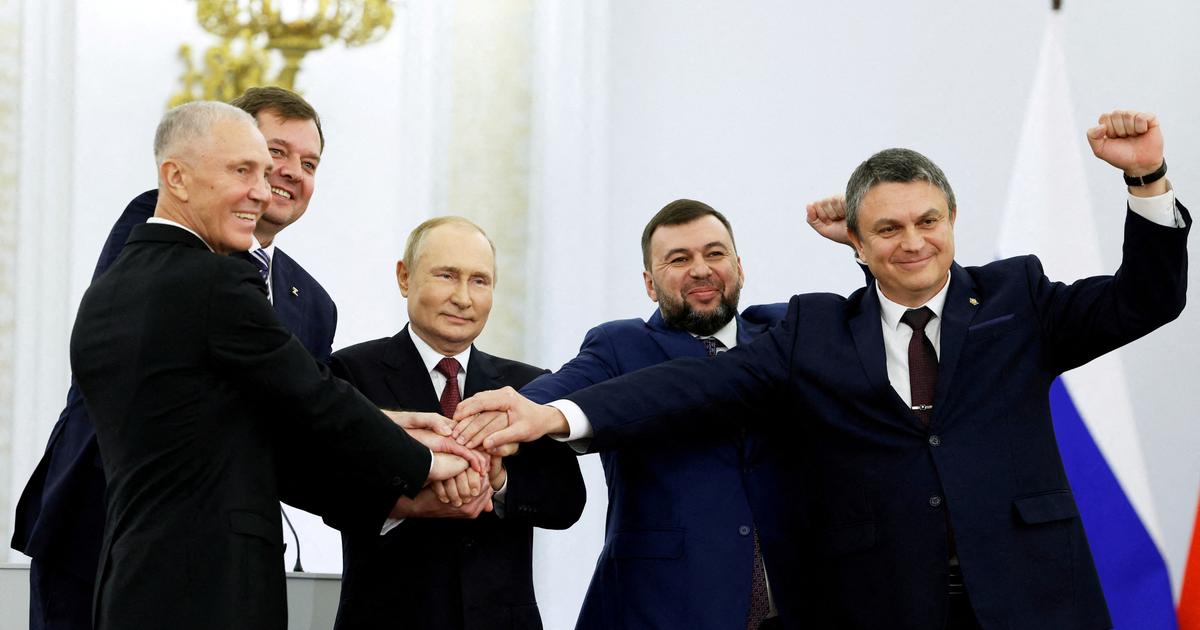 Ukraine: Putin recognizes the independence of the regions of Zaporizhia and Kherson 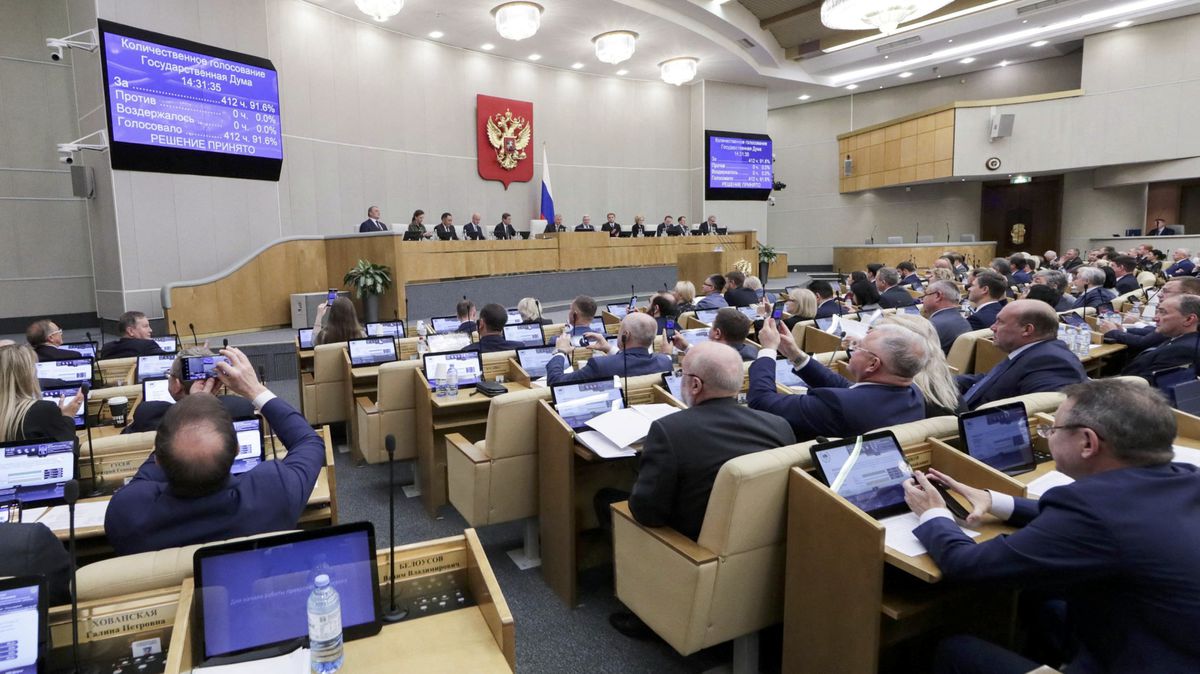 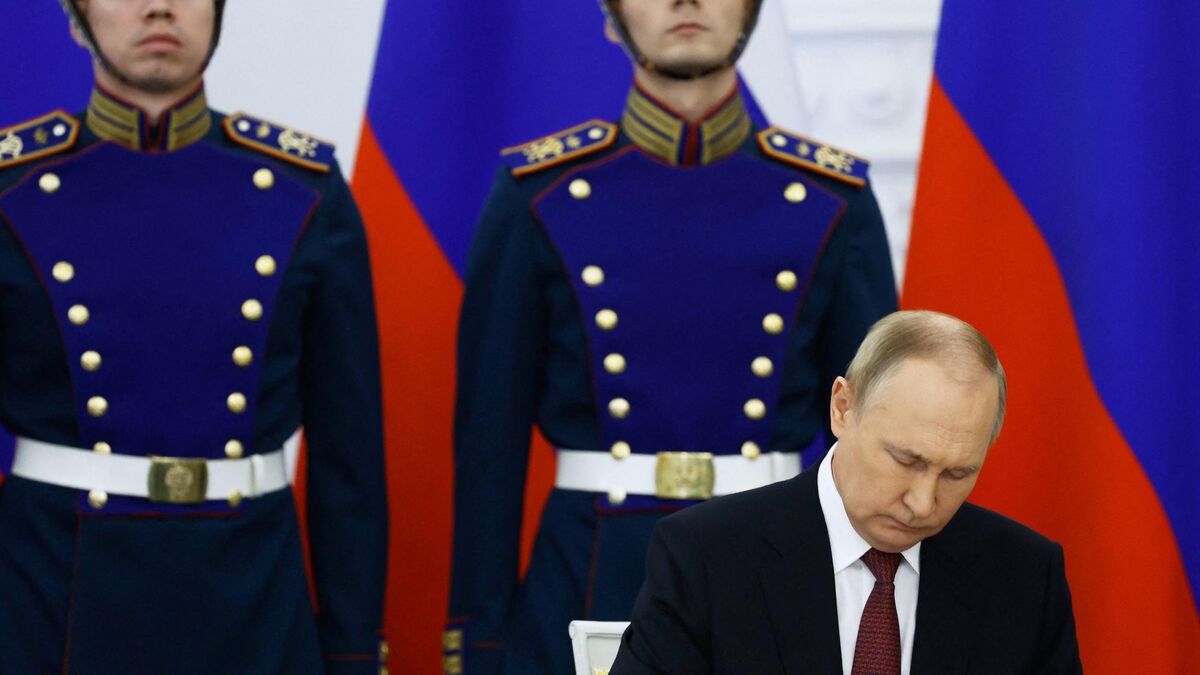 The sickly Putin was recorded panting and panting heavily in a meeting with actresses who pretended to be the mothers of dead soldiers - voila! news
2022-11-27T09:09:30.289Z