Zoff with relief MPK: Söder's quadruple extra sausage and SPD pressure on Scholz - what the protocol reveals Created: 09/30/2022, 05:30 By: Andreas Schmid Markus Söder (left) and Olaf Scholz after a federal-state round. After the recent MPK, Bayern is putting pressure on. © Bernd von Jutrczenka/dpa (archive photo) Bavaria is dissatisfied with the recent prime ministers' conference. The Free St 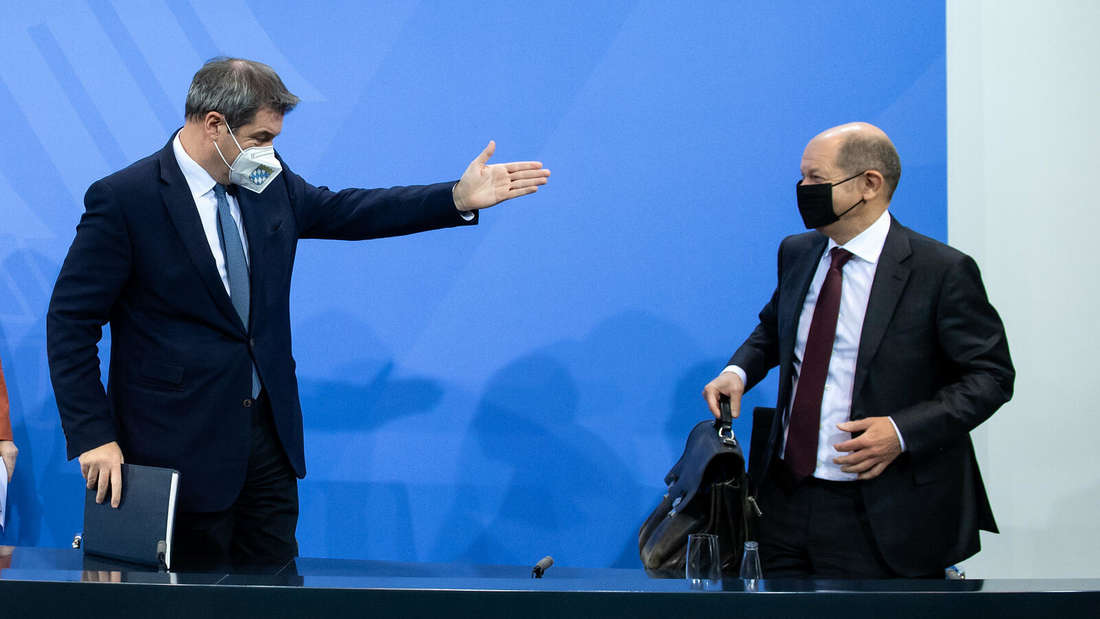 Markus Söder (left) and Olaf Scholz after a federal-state round.

After the recent MPK, Bayern is putting pressure on.

Bavaria is dissatisfied with the recent prime ministers' conference.

The Free State has something to complain about in the result four times - but the SPD states are also putting pressure on them.

Berlin - The heads of government of the 16 federal states actually wanted to speak to Olaf Scholz personally after their prime ministers' conference on Wednesday (September 28).

However, the meeting with Scholz was canceled due to the Chancellor’s corona infection.

The direct dialogue, for example on the distribution of the costs for further relief, has been postponed to the beginning of October.

The decisions of the federal states are now rather in a vacuum - and still show dissatisfaction: The SPD states are putting pressure on the federal government led by comrade Scholz when it comes to the debt brake.

Bavaria is probably the most dissatisfied with the MPK.

The Free State sees a need to catch up, especially in the area of ​​energy supply.

"What is needed is clarity and reason instead of ideological blinkers," says a protocol statement on the decision paper, which is available on

The Bavarian delegation led by Prime Minister Markus Söder calls for the three nuclear power plants still in operation to be “immediately extended until at least December 31, 2024”.

This is not currently planned for the nuclear power plant in Emsland, Lower Saxony.

It is scheduled to be completely taken off the grid by the end of 2022.

Furthermore, from the Bavarian point of view, the coal and mineral oil power plants must “quickly return to the market”.

In addition, the planned relief does not go far enough for the Free State.

Due to the “dramatic consequences of the high energy prices”, further measures are necessary.

The planned nationalization of Uniper is "long overdue" and the "outdated and legally questionable gas procurement levy" must be "stopped immediately".

In addition, a fuel price cap is needed that makes refueling cheaper for people in rural areas who rely on their cars.

The Bavarian state government is also demanding "immediate" tax cuts, for example in the case of value added tax on staple foods.

As a fourth point, Bavaria needs additional funds for public transport - regardless of a discussed successor model for the nine-euro ticket.

"Where trains don't run and buses don't stop, the citizens are of little help with a subsidized cheap ticket."

On Wednesday, the federal states called for an energy price cap and specific relief for lower and middle incomes as well as small and medium-sized companies.

It is the largest relief measure of all relief packages.

"In all likelihood," said Berlin's Governing Mayor Franziska Giffey (SPD), the costs would be "in the hundreds of billions."

How is that supposed to be paid for?

As Giffey admitted in a press conference after the talks, the federal states disagree on the financing.

In particular, the question of whether new loans can be taken out for financing beyond the limitation of the debt brake "we could not finally clarify".

The SPD representatives in particular put the pressure on here.

What is the debt brake?

“The debt brake provides that the budgets of the federal and state governments are to be balanced without income from loans.

This regulation is enshrined in Article 109 of the Basic Law," says the Federal Ministry of Finance.

Put simply, this means that Germany will not incur any new debt.

In the event of natural disasters or other emergencies, the debt brake can be suspended - as happened from 2020 to 2022.

MPK: SPD states are putting pressure on Scholz with the debt brake

Another statement in the minutes reads: "We note that we are dealing with an exceptional emergency situation within the meaning of the Basic Law.

This justifies the federal and state governments to take out loans beyond the limit of the debt brake.”

With the exception of Thuringia, with its Left Prime Minister Bodo Ramelow, these countries are all governed by SPD prime ministers.

Debt brake issue: Merz jumps to the side of “lonely” Lindner

FDP Finance Minister Christian Lindner wants to stick to the debt brake regardless of the state demands.

The leader of the Liberal party is increasingly acting in isolation.

"I've seen that I'm getting lonelier now that Markus Söder has now said that the debt brake is a matter of riding on principles," Lindner said last week to the

CDU leader Friedrich Merz, assigned to the economically liberal wing of the Union, sees it similar to Lindner.

It is “not a matter of principle to stick to the debt brake, but it is in the Basic Law with good reason,” Merz told the Welt broadcaster.

He "completely agrees with Lindner that we should stick to the debt brake.

Solving them is not an option.” Scholz also wants to stick to the debt brake.

The next federal-state round is scheduled for Tuesday, October 4th.

The Chancellor should then also be there.

It seems he has a lot to talk about with the countries.

Both with the traffic light critic Söder and the heads of government in his own party. Trouble for Scholz from the MPK? Weil Hints at Poisoned Relief "Advice" - "No One Else Will Understand"